Geese on the wedding

The Tatar wedding is a bright phenomenon, but at the same time complex, because it requires the performance of a large number of rituals, observance of Muslim traditions and customs. A large number of national rites makes the wedding interesting and distinctive. Mandatory cooking and traditional butchering of the goose is observed at every Tatar wedding. Giving newlyweds gifts and money during the ritual with poultry is also part of the ritual. This bird is a symbol of the well-being of a young family..

Goose traditions at the wedding

The wedding feast at the Tatars lasts several days; it takes place in the homes of both the bride and groom. An obligatory dish on the wedding table should be a goose. Sometimes it is prepared by both sides, but more often, according to tradition, the bird, already plucked and gutted, was provided by the groom's relatives, and she cooked or baked it entirely directly in the bride's house. In a certain sequence of serving traditional dishes on the wedding table, it was the turn of the goose. The removal of the dish was accompanied by presenting gifts to the newlyweds with gratitude for the invitation to the wedding.

For ceremonial cutting of a bird, a special person was chosen, which could only be a man. He began to carefully separate the pieces of meat with a knife, much larger and wider than usual. The bones of the ritual bird were supposed to remain intact without damage. Depending on the geographical location of the Tatar wedding, the order of the cutting sequence could be different:

Presentation of each part of the separated piece was accompanied by traditional words, the meaning of which was that from this day the wings are cut off, look around, other family people are not supposed to, you need to read and love each other. After the ritual cutting of the legs, wings and head, the bird was cut into portions and treated guests.

How to decorate a goose for a wedding - design options

Lettuce, parsley, cilantro and chopped tomatoes are laid out in a random order on a dish around the cooked bird. To make the crust become a beautiful golden color, before placing it in the oven, you need to grate it with lemon juice, and then with olive oil. Ready meat goes well with fresh berries, grapes, lime, orange laid out for decoration. To give juiciness to meat, the bird is stuffed: citrus fruits are an excellent filling. Jewelry carved from vegetables will help diversify the ritual dish.

Decorate the paws of the finished bird with paper pompons. It is easy to make them yourself from white or colored paper, making a fringe or loop around the edges. Putting paper jewelry in the form of cylinders on the legs, they are fixed by pressing. The appearance of the finished dish takes on a more noble, presentable appearance. When distributing cut off legs to the newlyweds, using pompons it is convenient to take them with your hands, without risking getting dirty with fat. 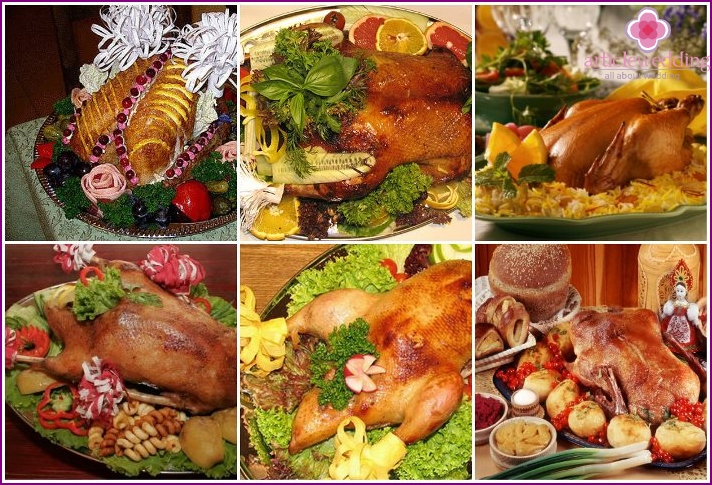 Modern cooking brings creative corrections to old traditions. An innovation at the Tatar wedding was the decoration of this obligatory dish in the style of the newlyweds. Improvised wedding dresses of the newlyweds are placed on top of a pair of carcasses lying on one dish. A creative approach to the traditions of ancestors brings a highlight to the decoration of an abundant wedding table.

The ritual goose on the table of the Tatar wedding is a very ancient tradition. Waterfowl is a symbol of fertility and family well-being. According to ancient beliefs, the ritual goose helped the young family maintain welfare. During the wedding banquet, the presence of a traditional dish on the table is a must. Baked bird served in combination with pilaf or fresh vegetables, decorated depending on the imagination of the cooks. 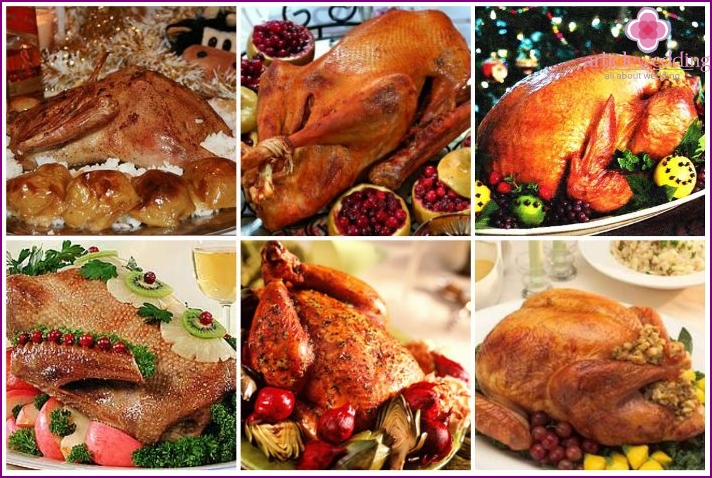