A traditional Caucasian wedding is a series of magnificent ceremonies, the preparation for which is extremely serious. And although modernity has made some adjustments to individual wedding moments, Caucasians managed to preserve the unique features of an original celebration. This event is waiting for the newlyweds, their parents and guests, because a wedding for a representative of Caucasian nationality is not an ordinary holiday, but one of the most striking events that happen in life. They are preparing for it according to a certain scenario of a Caucasian wedding. Consider in detail significant wedding ceremonies.

How does the Caucasian wedding go - scenario

Representatives of different nationalities live in the Caucasus (Ossetians, Armenians, Chechens, Azerbaijanis), and therefore the traditions and rituals of different regions may differ slightly or significantly. But the following stages of preparation and celebration are necessarily present: matchmaking, appointment of a Caucasian wedding date, discussion of kalym, theft (optional stage), the very day of the wedding. The city celebration is different from the village one: in large settlements, the event is already less traditional, in the villages many ceremonies are preserved. 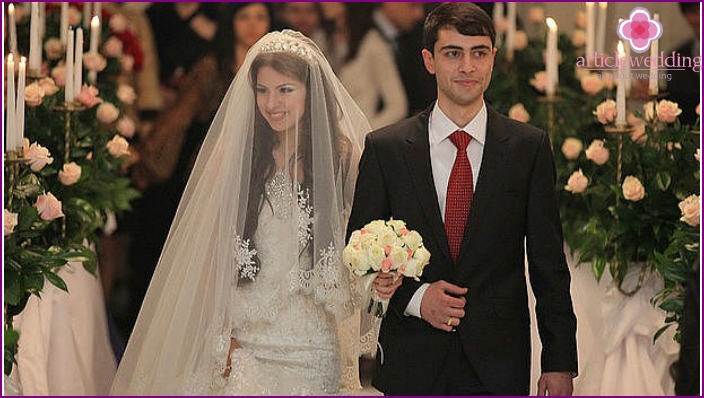 In ancient times, before the matchmaking, the future wife went through another stage of preparation for the wedding: the choice of the bride. As a rule, parents were engaged in finding a suitable passion, often this happened when the narrowed were still very small. Each family tried to find the ideal option for a son, and therefore, when choosing a bride, everything was taken into account: from the marital status of the parents to her health (because it determined the ability to give birth and raise offspring). Today, this tradition has not been preserved in many places, the groom independently chooses his future wife.

Having received the blessing of the parents (albeit symbolic), the groom sends the matchmakers to the bridegroom. To begin with, the man’s family informs the girl’s parents about the date of the matchmaking, for which they carefully prepare (set the table, prepare speeches). When the matchmakers arrive for the first time, the father, brother or mediator from the groom arrives home to the future wife, where he is warmly received by the close relatives of the bridegroom. After abstract discussions, the matchmaker proceeds to the main purpose of the visit - the request of the girl’s hand and heart. For the first time it is customary to refuse such a request.

The second time, the preparations for the arrival of the matchmakers are much larger: the bride's parents set up a chic table, invite many close relatives, and the representatives of the groom's side are welcomed warmly and cordially. And again, it is not customary to get down to business immediately: guests at the table are talking about the weather, recent events, and news. When the standard topics end, the matchmakers again voice the request of the bride’s hand and heart. This time father agrees.

After the second matchmaker's walk, the matchmakers agree to meet with the bride's family again - to discuss the date of the upcoming celebration. Previously, they married the girl in the spring, while the Caucasian wedding itself took place in the fall (after the end of all field work), but now the newlyweds and their parents prefer summer festivities. During the appointment, the financial side of the event is also discussed (according to tradition, the groom will take care of the wedding expenses), the number of guests present at the celebration, the size of the bridegroom. 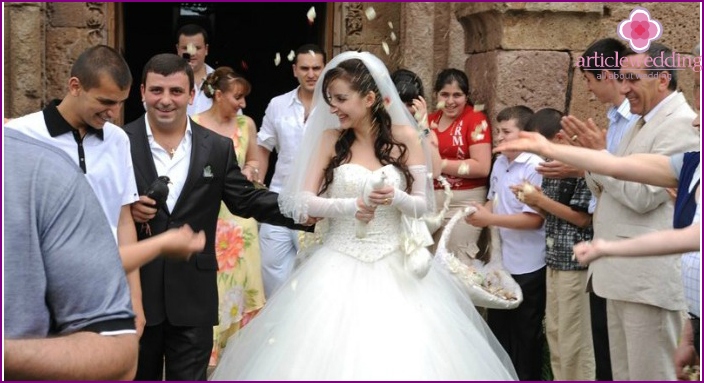 Discussion of the size of kalym

This word is called peculiar «buyout» the bride, the compensation paid by the groom's side to the girl’s Caucasian family for the loss of a useful worker, and also the property that she takes with her to the new house. As a rule, material things used to act as a kalym, now they prefer to pay money to their parents. There is another interpretation: this is not a ransom paid to the bride’s parents, but a gift from her bridegroom to her bridegroom, which she receives in the form of a dowry. In this case, no one but a girl has the right to a kalym.

This custom is known to everyone, but rarely used in practice. In the old days, it happened that the girl’s parents or she herself unexpectedly refused the bridegroom a wedding. There was only one chance to marry the bride - to steal her. The theft, as a rule, was made by close friends of the future spouse or brothers, they brought the girl to the groom's house, where they surrounded her with honors, persuaded them in every possible way to accept the offer. As a result, the beautiful bride had no choice but to say «Yes». After spending the night in the house with men, she was already considered disgraced.

A Caucasian wedding is a generous feast, to which a huge number of guests come. Sometimes the event is attended by about 200-300 people, because by tradition, any passer-by who brought a gift has the right to eat, drink and have fun at a wedding celebration. Newlyweds are sure to invite all relatives, even the most distant, because if you forget about someone - this is a reason for serious resentment. At the very walk, music necessarily sounds, dances take place, including the Lezghinka, so beloved by the Caucasian people, where the girl acts as a beautiful swan, and the man in the image of an eagle. 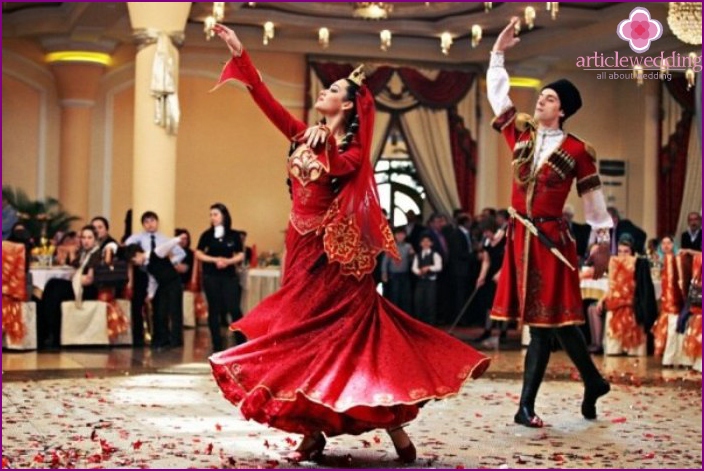 The Caucasian wedding is not complete without magnificent toasts: the guests of the event carefully prepare for the pronunciation of the congratulatory speech. During the wishes in honor of the heroes of the occasion, those present praise the man’s strength, courage and perseverance. Turning to the bride, they talk about her unearthly beauty, thrift, modesty and humility. Toasts themselves often sound not in the form of standard congratulatory words, but are told as parables. Those present try to give the newlyweds beautiful instructions in the form of metaphorical statements..

Previously, only sisters were allowed to attend a Caucasian wedding from the bride, but close friends of the girl, and sometimes other relatives, came to modern events. For girlfriends of a narrowed, a wedding celebration is also a big event, because there is a chance to meet your soul mate. Girls are seriously preparing for the event, embroider their outfits, handkerchiefs (which later can be handed over to the favorite gentleman). Young people, in turn, learn ingenious phrases, and as a sign of their location, they pass on treats to the lady they like. 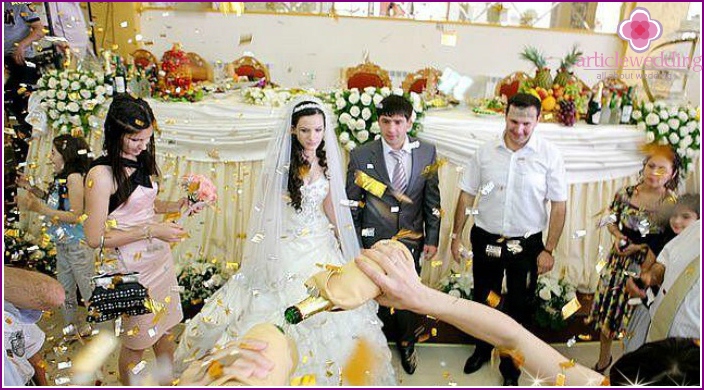 There are several more features that highlight Caucasian weddings. For example, the bride at this event, unlike other guests, decided to behave quietly and modestly, talk a little, and sit away from the general fun. The girl should eat and drink a little, often her face is covered from the audience with a white cloth. The culprits of the celebration at a traditional Caucasian wedding are forbidden to touch each other. Only after the bride crosses the threshold of the house narrowed and touch «will remove the ban», their first wedding night will happen.

Respect for the woman in general and the main heroine of the wedding in particular is a cult of the Caucasian people, formed by the ancient traditions of Islam. Unlike feasts in other countries, it’s not customary to shout «Bitterly!» (the newlyweds at the celebration do not even have the right to touch each other), to make vulgar jokes. Any liberties with respect to the girl are forbidden, indecent comments. 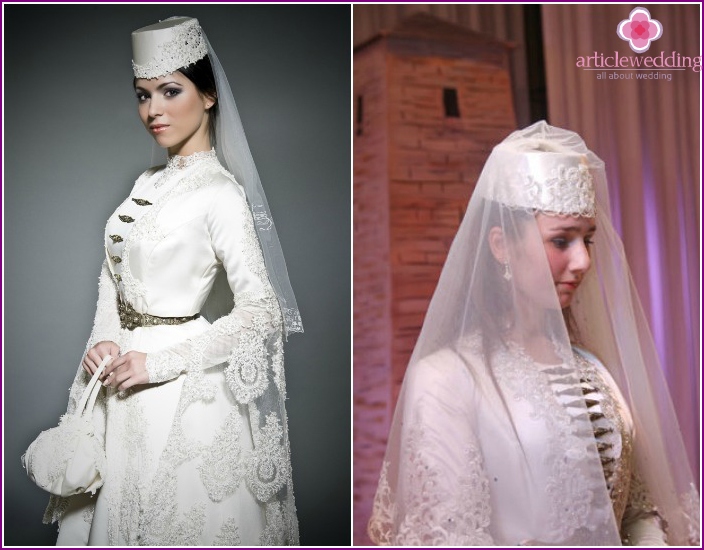 A large wedding procession is necessarily present at the Caucasian wedding. Often, the string totals 30-40 executive cars, during the trip all the cars honk loudly. In the first car rides, the so-called, «banker». According to Caucasian traditions, anyone can block the motorcade. To go further, the banker must pay a passerby a tribute (in money, sweets). The newlyweds drive in the second car, and the third carries the carpets that they lay in front of the narrowed one so that her leg does not step on the ground. In the remaining cars are relatives and friends.

How long does a Caucasian wedding last?

A traditional Caucasian wedding used to last at least three days. All this time, invited guests and newcomers to the village were waiting for a magnificent feast, funny dances, live music and other events. It was believed that the louder those present at the Caucasian celebration behave, the happier and richer the life of the newly-made spouses will be. During this event, it was customary to invite only the relatives of the groom, but this tradition is often violated in the modern world, therefore, there are also family brides at the wedding. 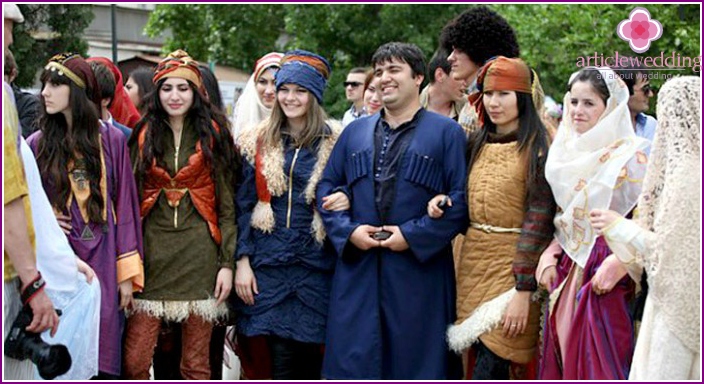 In connection with this custom, which has now lost its relevance, two weddings were played before. The first one was held with the bride's relatives a week before the official marriage and lasted only one day. This event symbolized the farewell of parents to their beloved daughter, her transition to a new family. The bride and groom must have attended the fun walk.

Given that the wedding is almost the main event among Caucasians, they do not spare money on organizing the event. Relatives involved in the preparation of this event are ready to give away the last pennies, but to arrange a magnificent feast. To feel the atmosphere of the event, it is not enough to read about traditions with rituals, you need to see it with your own eyes. Watch an interesting, exciting video that shows how a beautiful Caucasian wedding goes: