A great, low-cost idea is a theme wedding in the style of an Academy Award ceremony. The red carpet, the bright flashes of cameras, the sparkle of expensive outfits and jewelry - you and your guests will feel like Hollywood stars and world celebrities. 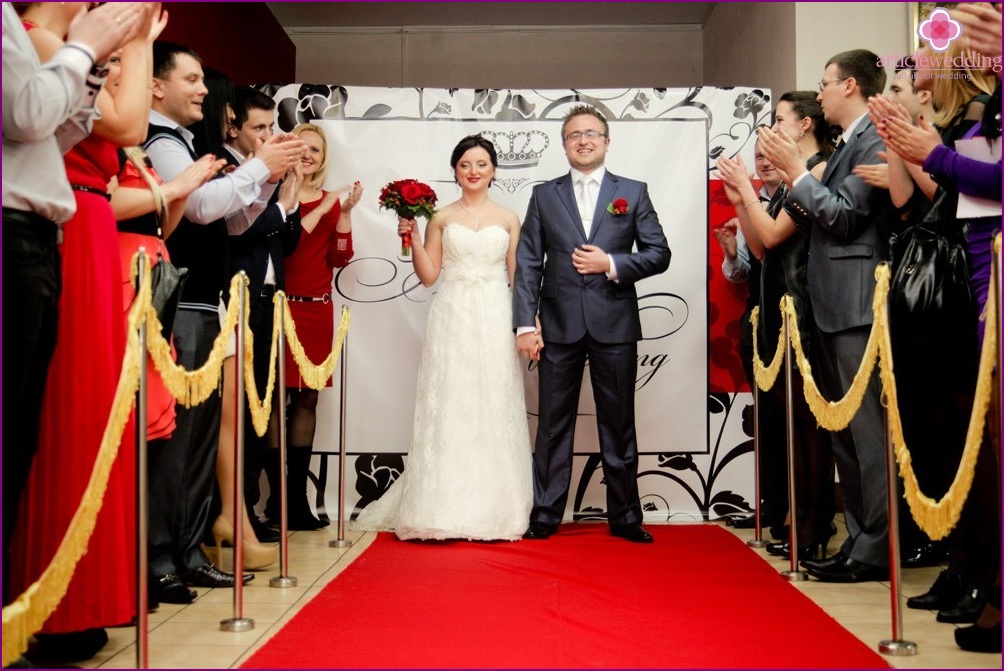 The first thing guests see when arriving at an Oscar-style wedding is the red carpet. On it pass all the guests who arrived for the holiday, posing for photographers. At the end of the track, you can put the operator, who will take short interviews with guests. You can even ask friends to play the role of journalists at a wedding: they will walk and interview guests throughout the evening.

The newlyweds are the last to arrive at the restaurant. By this time, all guests line up along the path. The host says:

Glad to welcome you to our film festival! Famous stellar couples and families walked along the red carpet. Attention, the most famous couple _____ and _____ appears on the track. Today they signed a successful and long-term contract for the shooting of the film "Marriage of Love." According to the forecasts of critics, the film will be romantic and tender, cheerful and positive! Applause!

After the newlyweds walk along the path, the host says:

And now I invite everyone to go to the hall to watch the festival program!

Take a seat in the places indicated on your tickets. In a few minutes we will begin our ceremony!

The bride’s parents say the toast and then the groom’s parents.

Guests have a drink and a snack. At this time, on the big screen, there is a documentary selection of photos and videos from various Oscars. The host says:

So, we continue the ceremony. Our young and famous couple is invited to the stage - _____ and _____! From today, they begin to work together on the film "Marriage of Love", because I want to take a short interview with them, which in the future I can sell at a crazy price.

The host asks the young questions in the form of an interview:

We are sincerely happy for you and are sure that this film will be the best! Dear participants of the film festival, I propose to fill glasses and drink for our talented movie couple! For their successful creative union!

Dear guests, I know that this evening you would like to sponsor our couple. I invite you to the hall for presenting gifts to young.

The presenter alternately represents relatives in the style of an Oscar. The bride and groom give guests comic Oscar-style figurines. Nominations may be as follows:

At the end, the facilitator says:

So, our wonderful sponsors made a huge financial contribution, which is so necessary to start filming the legendary film "Love Marriage". And our banquet continues!

While the guests have a drink and regale, the host chooses the most active man who is invited to take part in the room: he should change into Marilyn Monroe and spoil her to the famous song "I wont be love by you". To create the image you will need a white wig, white skirt, white family briefs, false breasts, a blouse with a large neckline, red lipstick and a black pencil.

When announcing the number, the host says:

Dear friends! Inimitable, amazing, charming arrived at our festival ... one of the sexiest women of all time - Marilyn Monroe!

The phonogram of the song is turned on. A parody is played, at the end of which Marilyn Monroe invites all guests to the dance floor. A dance break is announced, after which the guests sit at the tables, and the host says:

And now I invite all of us to see a remake of the famous movie "How was it?", Which won the nomination "Best Romantic Short of the Year".

Ladies and Gentlemen! Prepare your entry tickets, we’ll draw a lottery on them!

A drum is brought into the hall. To determine the winning numbers, the smallest guest is invited to the wedding. The leader gives out winnings (gifts), focusing on gender, age and appearance of people:

A dance break is announced, after which you can arrange a viewing of a humorous film, the plot of which is pre-invented by the guests and is composed of amateur shots of the bride and groom, their friends, acquaintances, etc..

You can hold such contests:

Next, the bride throws a bouquet, and the groom garter.

You can also carry out the ceremony of lighting the hearth. Moms light candles that light a large candle for young people. The host says:

Let this fire always burn in your family hearth. May it grow stronger and warm you. Carefully keep this symbolic candle as a sign of your eternal love and deep respect.

Then a cake is placed in the hall, which can be made in the shape of a star or topped with an ordinary multi-tiered cake with an Oscar. After that, the facilitator says:

Ladies and gentlemen! Our film festival has come to an end! Thank you for coming to us. And at the end of the evening, young and guests will enjoy a beautiful salute. I ask everyone to go out!

Guests light candles, stand along the red carpet in the form of a living corridor, along which the newlyweds leave the hall. They are followed by guests, because there is a firework waiting for everyone on the street, after which it is possible to bookmark the stars of the newlyweds on the “Walk of Fame”.