If you want to hold a celebration bright and extraordinary, the portal www.articlewedding.com offers you a fun pirate-style wedding scenario. 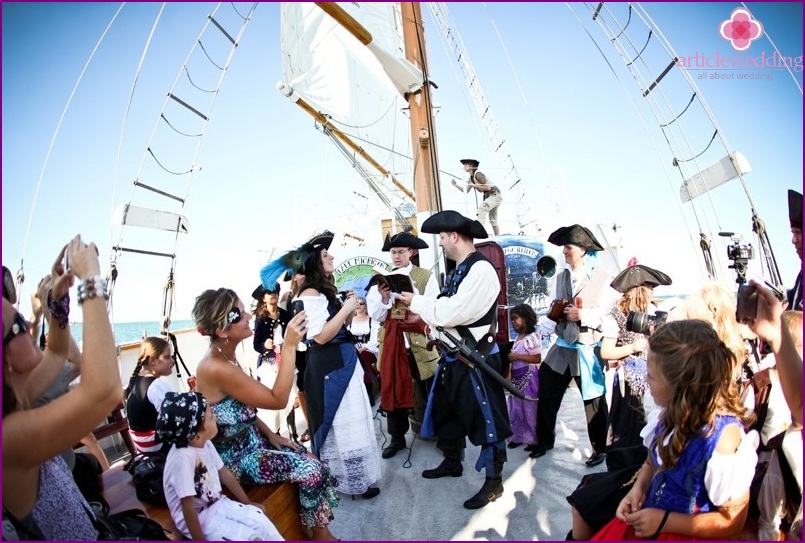 The newlyweds come to the restaurant, where they are met by guests and the host, dressed in the pirate Jack Sparrow or Jolly Jack with a toy parrot on his shoulder. The host says:

Glad to welcome you on our pirate ship! Today we must become one team and go sailing to the island of "Family Happiness." At the head of our ship is a young pirate couple - a formidable pirate _____ and his lady and chief navigator _____. Let's greet them! Gip, gip, cheers!

The newlyweds pass through the living corridor from the guests who showered them with coins (they throw them under their feet), greet the young with a whistle and screaming.

The bride and groom approach the parents who hold the loaf and 2 mugs, decorated with burlap and twine. The host says:

Accept a loaf from your parents - a symbol of your love! Break off a piece and salt them. Now feed each other, salting each other for the last time. And may your life always be sweet and long!

Now drink rum from a barrel raised from the bottom of the deep sea. And you can give the mooring! Volleys of guns in your honor!

Guests scorching from toy pistols and confetti. Everyone is invited to go to the gym..

The guests sit down at the tables, the host announces the first toast:

Today your life has changed dramatically. For a long time you sailed separately from each other, but now everything will be different - you have to go sailing on your ship across the boundless sea. So do not be afraid of light unrest and endless expanses of life, may storms and Bermuda triangles not meet on your way. Let's raise the first toast to a young pirate family and give a salute of all the guns in their honor. Only instead of “Gorky” today we will shout “Boarding!”.

While the guests have a drink and regale, the host says:

But not all the pirates of our ship know each other. Therefore, I suggest that we get to know each other. Pass the microphone in turn and name your nickname. I am Captain Jack Sparrow, and you?

For the best nicknames, the host gives guests gifts. If someone cannot come up with a nickname, the facilitator helps him. For example: Lame Joe, Dirty Bill, Jack Shark Eater, Bob Ripped Ear, etc..

The facilitator then says:

In the holds of our ship discovered a huge amount of rum and snacks. Well, let's fill the ship’s mugs and drink to let this ship go on a happy voyage of a lifetime! Aboard!

The following is given the word to parents:

Let’s listen to our experienced pirates - the groom’s parents.

Then the word is given to the parents of the bride.

After which the ceremony of donation is carried out:

Let’s fill the chest with young coins so that they don’t need anything to swim together. I ask you, pirates, to give young people part of their treasures that you won in heavy battles in the Caribbean.

Guests sit at the tables. The word is given to relatives and friends. While the guests are eating, the host tells the guests:

Now let's check if you are real pirates! Laugh pirate!

The guests are laughing. The presenter gives the most active prize - a pirate bandana or an icon on which is written The thunder of laughter.

After which the leader says:

And now I invite our young pirate couple to the dance floor so that they perform their first dance.

Young are dancing. It’s best if the dance is accompanied by music from pirated films, for example, from the Pirates of the Caribbean movie.

After this, a dance break is announced, then a feast, during which artists can perform, for example, shows of trained animals, in particular parrots.

If the guests are wearing a pirate style, then you can hold a costume contest. The host says:

Now let's vote for the best pirate outfit. No wonder you, dear bandits, have spent so much time creating your image.

You can hold several thematic competitions:

Divination by a boy and a girl can be done in the form of bets. The witness accepts bets on the boy, the witness on the girl. After the end of bets, dice are thrown. If an odd number falls out, it means that a boy will be born, even - a girl. Those who made the correct bet receive prizes (mini-bottles of rum, pirate bandanas, etc.).

During a dance break, firing from toy pistols and confetti begins. To all this noise, guests steal the bride. The host says:

Attention, enemy pirates crawled to our feast and stole the bride. Here are their requirements!

The host takes a scroll from a bottle and reads:

I, Captain Barbossa, demand a ransom for your beautiful bride - 100 piastres and a bottle of the best rum from the captain’s reserves. Yo ho ho!

Let's continue our feast and move on to the island of "Family Happiness".

The ceremony of lighting the hearth can be carried out in the form of raising the seed flag. The host says:

As a symbol of your union, let's raise your family flag. I offer parents to say parting words!

Parents say wishes to the young. The music from the movie "Pirates of the Caribbean" is included, the presenter says:

_____ and _____, you go on a long voyage to the island of "Family Happiness." May your flag always illuminate your path, protecting from inclement weather and storms. Raise family sails!

Next, the bride’s bouquet and garter are thrown.

As an idea for the wishes of guests, you can use a table on which a bottle will stand and lay out papers and pens. Each guest can come up, write a wish and throw it in a bottle. At the end of the evening you can hold a wish lottery. Pull out 5 pieces of paper with wishes, those who wrote them will receive prizes from the young.

At the end of the wedding, a cake is brought into the hall, which can be made in the form of a ship or a pirate flag. Pieces of the pie can be handed out or sold for coins..

Vintage suitcase for cards with your own ...