Do you like to fly airplanes? Would you like to feel in the role of pilots surrounded by stewardesses, cabin crew and air passengers? Then the portal www.articlewedding.com advises you to pay attention to the wedding scenario "Wedding Flight", which will help you and your guests to plunge into the atmosphere of flight on a huge airliner. 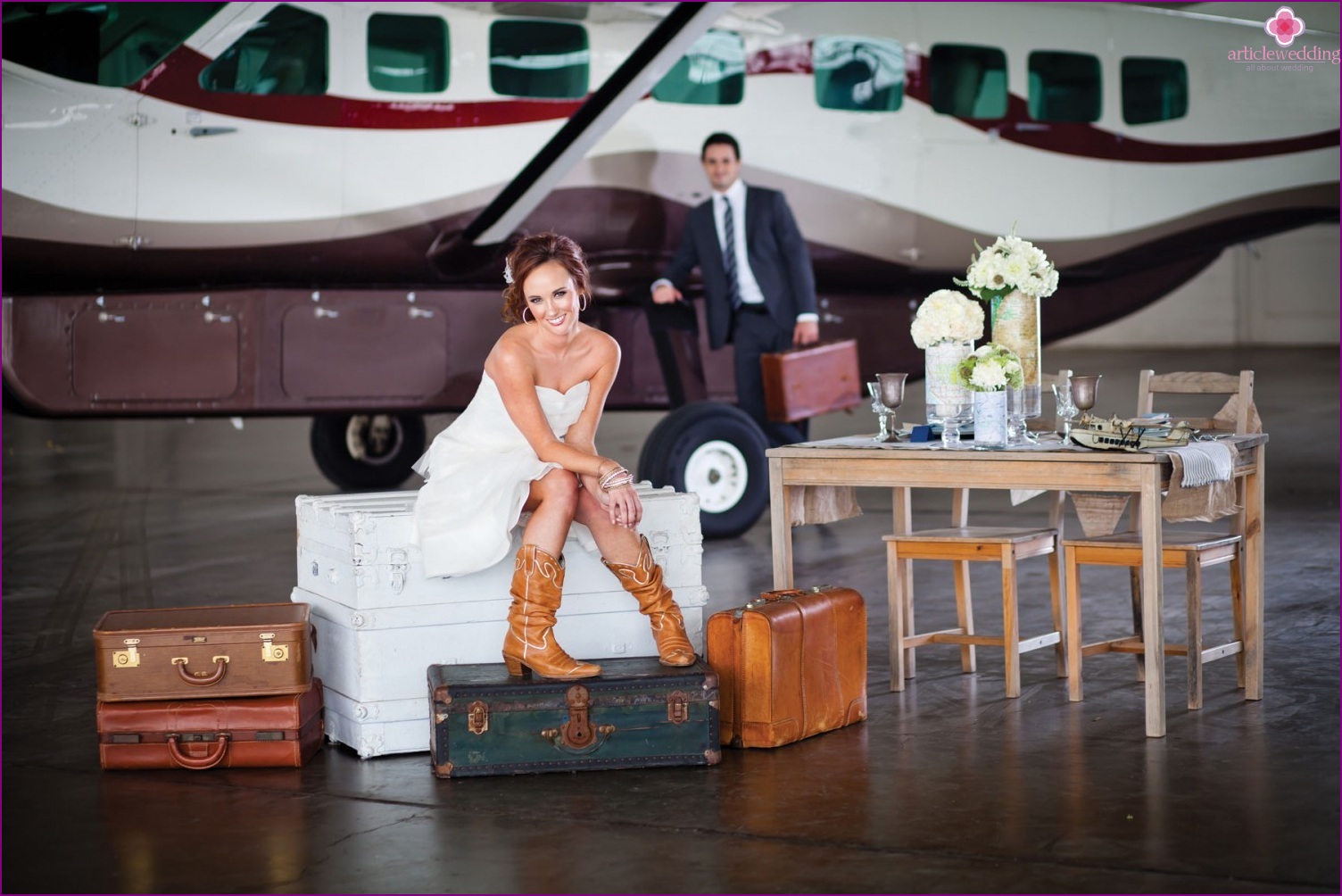 The wedding is conducted by the host as a stewardess or the host as a pilot. Young come to the restaurant with a walk. Guests meet them in the form of a "living" corridor. The newlyweds pass along the “living” corridor, at the end of which they see a green ribbon. The presenter says:

For the first time this crew takes off,
First time to fly alone.
When everything is first, then the tape is cut,
And we decided to abide by that custom.

Newlyweds take scissors and cut the ribbon. All shout: "Hurray!". And the presenter continues:

Attention attention! _____ Airlines invites you to join the _____ airliner, which will soon be on a flight. Our newlyweds will be the pilot and the flight pilot, I will be the witnesses and the stewardess, and the parents of our dear couple will be the navigators. And I wish the passengers a pleasant flight into the world of fun and positive!

Newlyweds come to their parents, break off a piece of loaf. The host continues:

Oh, it’s immediately obvious who we will be the main pilot. Who broke the biggest piece? Of course, _____! Well, now I invite everyone to board!

Guests sit in their seats, and the host says:

Gifts can still be left in the customs inspection area, and then given to the newlyweds. Take your seats according to the tickets purchased (invitations or banquet cards made in the form of tickets).

After all the guests took their places at the tables, the host says:

Welcome aboard our _____ wedding liner. We have great weather overboard, all the instruments - legs and arms, eyes and ears - are working fine so far. Flight speed - 6 toasts per hour, flight range - until the end and at night.

To overcome all the hardships on the flight,
Take each other's hands today,
And so through life's years
You make your successful flight!

We believe all obstacles will pass,
Kohl together you will hold the helm along the way,
On your twin-engine aircraft
We wish you to fly without landing!

Ready to fly happy you go?
And neither the "pit" nor the "chatterbox" are scary to you?
Well, to cope with the excitement of takeoff,
All together we must raise the glass!

Passengers, "refuel" with fuel! And we get up to give presents to the newlyweds!

Giving gifts. The donation table can be decorated with the sign "Customs gives good." After that, the guests sit again at the table. The host gives the floor to parents:

Excusable tears and excitement,
Sound a little muffled voice...
Today, children have a family birth,
They have a runway open.

Thank you for raising them.,
Cooked in a difficult, long way,
What their goodness and honesty taught,
So as not to turn off the course taken by him.

The word is given to the main navigators of our ship - parents.

Parents say toasts. While guests are eating, the host entertains them:

While you are “fueling” fuel, let me announce the rules of our flight today:

Anyone who does not fulfill these requirements will be declared a "terrorist" and punished..

The facilitator then says:

Our airliner makes its first landing at the airport called "First Wedding Dance." The first ones from the plane ladder I suggest you go down young to perform your wedding dance.

The newlyweds dance, at the end of the dance, the host says:

And now I ask all passengers to join our young!

After the dance, a dance break is announced, after which the guests sit at the tables.

The host holds a competition at the table, which opens the entertainment program:

Let's choose a flight attendant at each of the tables. I suggest that all men take a ball and, at the command of the young, start to inflate them. Once the newlyweds count to 5, you must stop. Whoever inflates the biggest balloon will be the flight attendant.

Winners are given comic badges. They say a joint toast.

Further, other contests are held. The presenter says:

Now let's hold competitions for the best designer and pilot. Who dreamed of being a pilot or designer in childhood? Go to the center of the hall!

In the center of the hall are everyone who is divided into two teams. The first team (designers) makes airplanes out of paper, which they transfer to the second team - the pilots. The task of the pilots: to land as many airplanes as possible on the airfield - a circle in the center of the hall, drawn in chalk. The best designer receives the order "Honored Aircraft Designer", and the pilot receives the order "Brave Test Pilot".

You can hold an alternative competition: the participants are given balls, which they must inflate, and then release. Whose ball will fly further, he won.

You can also hold a radio contest. Each participant takes turns wearing headphones that say a phrase that they read from the end. For example: I allow Moscow to land, normally the flight is on. Those. The flight is normal, I’ll hang out the landing in Moscow. He listens and writes down what he heard on the leaf. After that, all participants read out their options. The winner is selected, who most accurately named the phrase.

Then you can hold a navigation competition: participants must follow the zigzag drawn on the floor, looking through inverted binoculars.

At the end of the entertainment program, a stewardess competition can be held. Girls are invited to participate, who are tied to a neck with a handkerchief and put on a blue cap. The girls are given long ribbons, they divide the guests into teams, at the head of each they put the stewardess. At the command of the stewardesses, they should “fasten” the belts of their passengers: tie all of their passengers with tape as soon as possible.

After the competition, the host says:

With such a professional crew and excellent passengers, nothing will prevent our wedding liner from arriving at its destination on time. And now I ask all passengers to go to the middle of the salon (dance floor). Dance break announced!

After dancing, the host says:

Now let's help the young people determine who will be born first in their family: a pilot or a stewardess.

Voting is being conducted on the first-born. The presenter says:

All passengers are again requested to take their seats. During our flight you will be offered drinks and refreshments.

Guests sit at the tables, and the host continues:

Dear passengers, our wedding liner has arrived at its destination called "Happy Family Life". The flight was successful, and it is time for our pilots to free themselves from the attributes of the bride and groom, because they have already become full-fledged spouses.

The bride throws a bouquet to unmarried friends, and the groom throws a garter to bachelors.

Then you can carry out the ceremony of lighting the hearth. The presenter says:

Dear mothers, I ask you to light the family hearth of our young people so that he warms them and shows them the right path in life together.

A cake is brought into the hall, the young people cut it and make a thank-you speech. Then the host gives the guests candles and arranges the guests in the form of a "living" corridor. Lyric music sounds and the newlyweds are sent to the exit. And the host says:

Let this starry runway
Will show you a happy path in life,
So that you can meet sunsets and sunrises on it
And never to turn off her.

Happy flight, young!
Good luck to you again and again!
May life give you colored moments,
Let tenderness and love await you on the flight!