Home › Scripts and contests › Wedding script › Scenario of the wedding: from the ransom to the registry office

Scenario of the wedding: from the ransom to the registry office 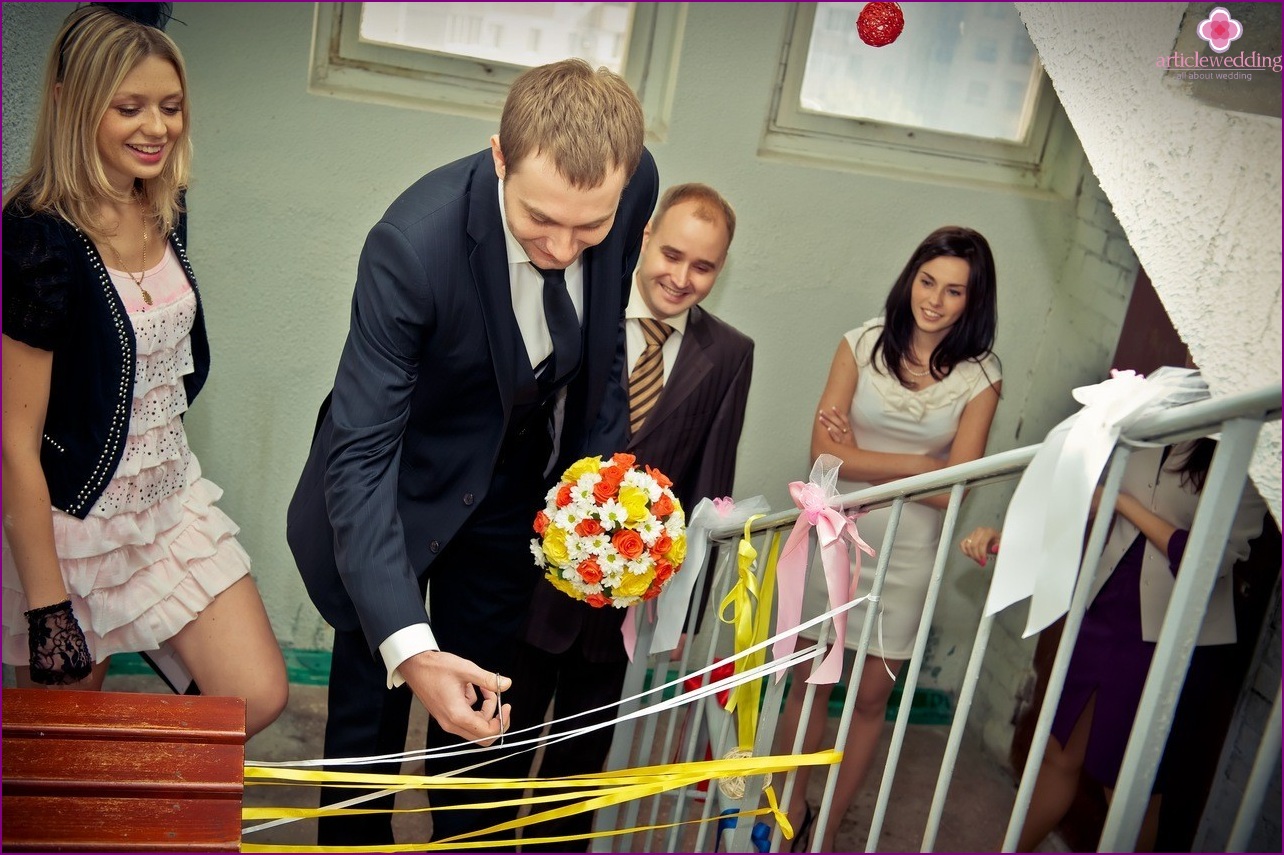 The bride and her girlfriends are fully armed waiting for the groom and his retinue. The groom arrives, he, his friends and relatives ring the doorbell of the bride. The bridesmaids open the door, and the witness says:

Hello, guests! Why did you come to us today?

And the witness says:

Not the bride, but the queen,
Yes, such a craftswoman!
We cherish the bride,
Just do not give back!
We need a ransom like this,
What can not express the price:
Three bottles of lemonade
Yes two bars of chocolate,
Vodka, beer - all by the river,
And a golden ring.

When a witness passes sweets and alcohol to her bridesmaids, the witness says:

I propose to check the groom and decide whether he is suitable for our beautiful bride! Let's do a couple of tests! So - test number one: let our bridegroom open the door behind which the bride is waiting for him!

The key to the front door should be frozen in advance. You can even prepare a few keys, and only one of them will be suitable. The groom and his friends must melt the ice with the warmth of their hands.

When the groom melts the ice and opens the door, the witness says:

You opened one of the doors for which the bride is waiting for you, but now you still have to go through a couple of tests, only after which you will receive our beauty.

If the apartment has several rooms, tests for the groom can be carried out in the following form: hang a poster with a specific task on each door. The groom selects the door, performs the task. Then he can open the door and check if his bride is hidden behind this door. This game continues until the groom finds the bride. If the apartment has one room, then the tests can be carried out in a standard form.

Before the test, the witness says:

Here you see these lips.
Guess or not,
Where is your favorite trace?

On the sheet of paper in advance, the bride and her friends leave lip prints. The groom must find the imprint of the lips of his beloved. The competition continues until the bride guesses the lips of the bride.

After the task is completed, the witness says the following:

What's your bride's name,
You write money.
How to write - show!

The bridegroom is offered to write the full name of his bride, but not with a pen, but with money.

As soon as the groom completes the task or gives the ransom, the witness says:

Now show how strong your love for the bride is. Tie this towel in a knot as tight as you love the bride.

They give the groom a towel, he ties it to a knot. And the witness says:

Now untie the knot as fast as you forget about the quarrels.

The groom tries to untie the towel. Meanwhile, in a room closed from the groom, ribbons are tied to the wrists of the bride and her girlfriends. After completing the assignment, the witness says:

And the last task: here are the ribbons for you. Choose the one your bride is attached to. Yes, look carefully, whose ribbon you choose, you’ll have to marry one.

Through an ajar door the groom is offered to choose a ribbon. If the groom pulls out the girlfriend’s ribbon, then he pays the ransom. If he chooses the bride’s ribbon, he enters the room and kisses his chosen one. This competition can easily amuse the guests if you quickly tie a guy dressed in women's clothes to the ribbon that the bridegroom chooses. Can you imagine the surprise of the groom and his friends when such a beautiful bride comes out of the room to him.

The number of contests depends on the time you have. The optimal amount is 3-5 pieces. You will find many other interesting contests in our articles:

After the groom completes all the tests, the guests are invited to the table to drink a glass of champagne and say to the young people the first parting words from their parents and witnesses. After which the young and guests are seated in cars, the bride's parents sprinkle grain on the cars. And everyone goes to the registry office.

When everyone arrives at the place of painting and gets out of the cars, the witnesses line up the guests in two lines along the steps. Newlyweds go to the wedding hall in the rain from the petals and the cheers of the guests. In the same way, the newlyweds are escorted from the registry office to the car, where they will go to a photo shoot and a wedding banquet..