34 years of marriage - what a wedding it is

Having lived together for thirty-four years as husband and wife, the couple understands the true value of such a long, strong relationship. Most spouses who marry at an early age divorce after a few years, not agreeing with the characters, so the heroes of the occasion of the thirty-fourth anniversary cause respect among others. At this point, they had already raised and raised children, and they probably gave birth to their grandchildren. Spouses with experience have long learned how to understand each other at a glance and a half look, formed a trusting relationship.

What is the name of the wedding anniversary 34 years?

The thirty-fourth wedding anniversary got its name in honor of the petrified resin of coniferous trees - amber. No wonder the celebration was named after the amber stone, because for its formation a large amount of time is needed. Until the ordinary resin turns into a real jewel, it becomes strong, radiant and beautiful, hundreds of years will pass. And for a good marriage, it takes a lot of time: at first it is weak, soft, malleable, like fresh resin, and only after tens of years it is able to withstand all difficulties, becoming strong and beautiful, like amber.

Amber stone has been known in Russia since ancient times, they not only adorned jewelry, household items, but also made cigarette cases and caskets with his direct participation. The greatest work of art created using this unique stone is considered the Amber Room - a place-masterpiece that adorned Tsarskoye Selo for a long time before its disappearance during the Great Patriotic War. The processing of amber resin began to show particular interest in the 40s of the last century, after which various artistic movements and schools arose. 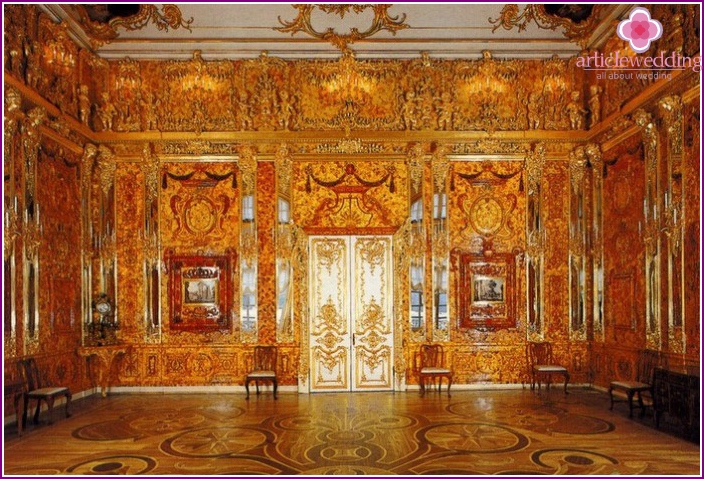 Amber fossils come in different colors: golden, honey-yellow, orange-yellow, red-brown, black, white, blue, and also banded. Stones are completely transparent, opaque and partially transparent, especially valuable jewelers finds that do not contain water or air bubbles. Only ten percent of amber fossils are suitable for inlaying in jewelry, decor details, for dishes made of precious metals. Most of it goes for further processing, used in the chemical industry.

Due to the beautiful appearance of amber stone, he was given many interesting names, for example, «gift of the sun». In ancient times, it was believed that amber protects a person from evil forces, helps to protect the family from unkind spirits, and also to establish a connection with ancestors. Until now, amber amulets are credited with the ability to give a person the opportunity to accurately analyze events, correctly predict their future course. This amulet should help travelers find a good overnight stay, and seagoing vessels to successfully make a sea voyage, protecting from the flood. 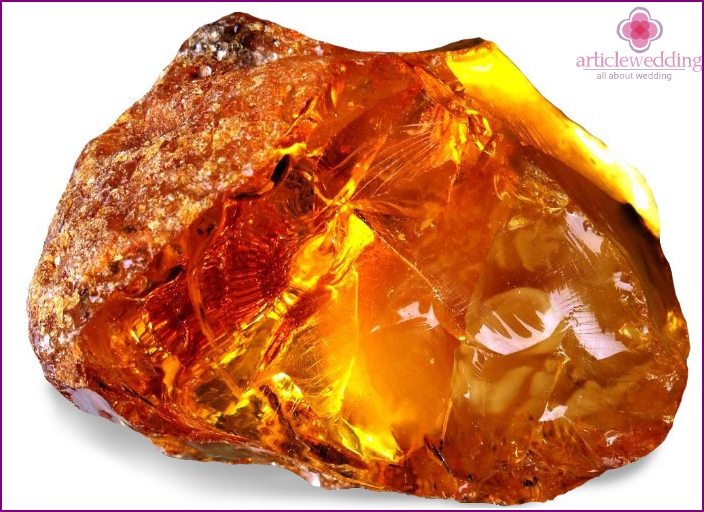 The tendency of ancient people to endow various phenomena and things with magic power did not go around amber: shamans said that amber stone is a magic resin of the forest. Those fossils that retained small twigs, leaves, and insects (in scientific terms - «inclusions») Such amber stones were inserted into the staves, performed magical rites with them..

Now many people believe that amber is able to clean the atmosphere, space, give light, warmth to the home, rid a person of bad memories and cope with difficulties. All these properties of amber stone rightly made it a symbol of the thirty-fourth anniversary of the marriage, in which both good and bad events happen, but the former outweigh and preserve the union.

By this time, the couple probably no longer quarrel over trifles, «clearing the atmosphere» around myself from turmoil and disagreement. They coped with many difficulties and forgot the old grievances, that is. And thanks to the wisdom that came at this age, the spouses «established contact with ancestors», began to better understand their parents by raising their own children. 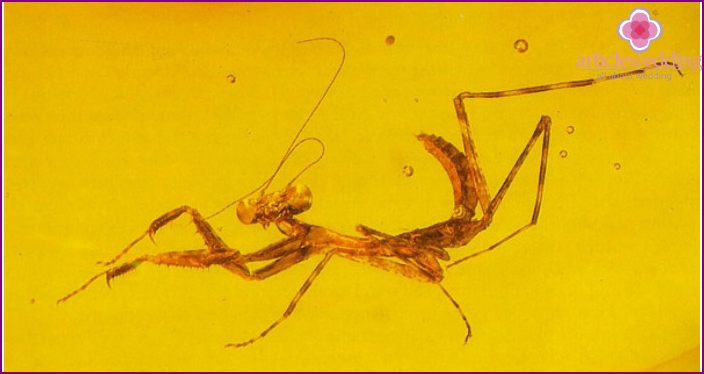 To create an original greeting with an amber wedding, guests invited to it, as well as people who just want to pay attention to the heroes of the occasion, you need to connect the text of the congratulation with the symbol of the anniversary - amber. Guests can find ready-made congratulations on the amber date of the wedding on the Internet or come up with their own. Do not be shy to say words that are taken from an accessible source, the main thing is to learn the text well and say wishes to the couple who survived to the amber wedding from the heart.

Beautiful words of congratulations in verses

Congratulations on the thirty-fourth wedding anniversary of a husband and wife can be in poetic form. This style of congratulation is more solemn than the usual prose text of a wish. Guests of a holiday devoted to a long life together of anniversaries can create a poetic work on their own: in this case, it is imperative to use the symbols of brilliant amber, comparing the stone with the family of anniversaries. Also, invited people can find a suitable verse related to the amber wedding, on the resources where congratulatory poems are collected. 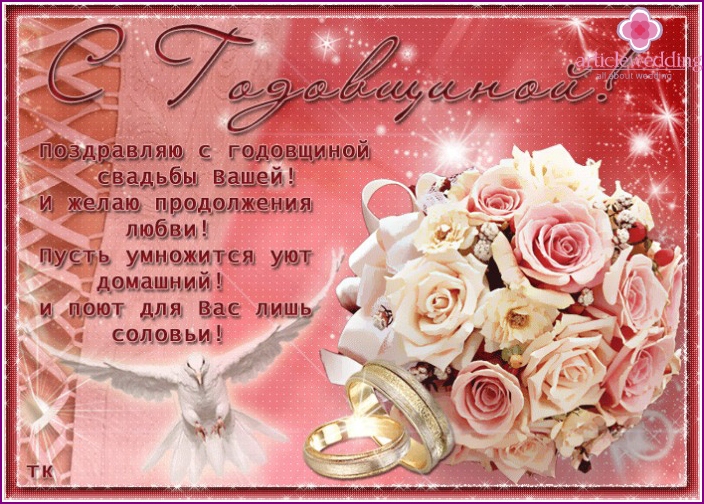 What is customary to give for an amber wedding?

To honor the long union of the heroes of the occasion at the amber wedding, guests can give them a variety of gifts. It can be either valuable, expensive gifts decorated with a symbol of an anniversary, or cute, touching, simple symbolic gifts. Much depends on the proximity of the amber wedding giving the spouses: if the guests are well aware of the spouses' hobbies, they can give something related to their favorite business.

The day begins with the husband and wife giving each other presents. At the moment of giving, the heroes of the occasion should thank each other for the gift of love, care, attention, the warming family hearth and the star shine of the partner's eyes, similar to the glimmers of amber. It will be good to associate all congratulations with the amber stone, because the thirty-fourth wedding anniversary is named after him. The culprits of the celebration should express their joy that fate bound them together - so the beginning of the amber anniversary will go well, will become memorable for the spouses.

The gift chosen for the partner does not have to be associated with an amber wedding - it can be an item fulfilling the long-held dream of the hero of the occasion. Also, a married couple can spend their savings on a joint purchase, which will serve as a good update for the home - for example, a dishwasher or a new refrigerator. The husband must give his wife a bouquet of yellow flowers. In addition, the wife can give her beloved a cigarette case, a cane, and the husband with his half - beads, bracelet, earrings.

By the time of the parents' amber wedding, the children must have already grown up, have got their own children, have established a financial situation, therefore they can give them a good present. As a thank you for the gift of life, upbringing, a son or daughter can make an expensive present for the heroes of the occasion: household appliances, an exquisite amber box with a star, a watch for father and mother - a beautiful decoration. Also a great gift is a photo or video congratulation, a presentation with pictures of family life. Watch a video gift from children to parents for an amber wedding:

How to celebrate 34 years of marriage?

Many heroes of the occasion wonder whether or not to celebrate the thirty-fourth anniversary. Indeed, in a year there will come a round date - the thirty-fifth anniversary of life together. On the one hand, it is not necessary to arrange a chic holiday, but to call your beloved children and close friends to sit comfortably at the festive table is a great solution for an amber wedding. On this day, the heroes of the day can decorate a modest dining table with amber products, decorate the room with a bouquet of honey, yellow, orange flowers, lay a corresponding tablecloth. 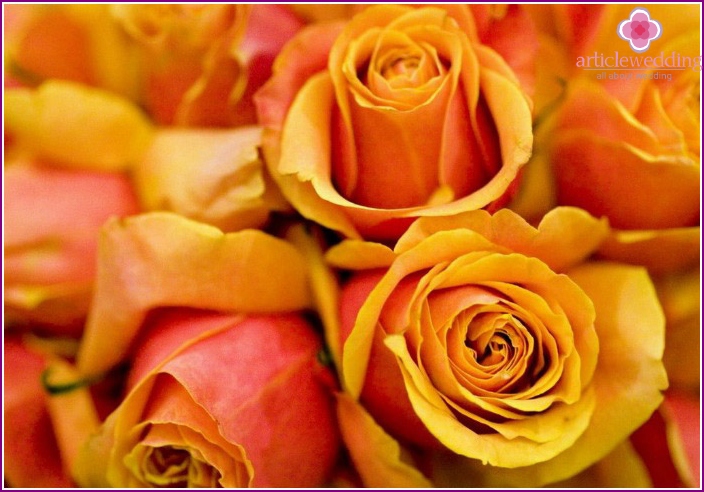 Amber wedding is another reason for the heroes of the occasion to remember how happy it is to live so long with your loved one. The anniversary symbol speaks of a strong family formed over thirty-five years of spending time together, and then the anniversaries only need to take care of their main jewel - a long, happy marriage. At the amber wedding, the heroes of the occasion can re-look at each other, refresh and warm their romantic relationship.