The thirty-fifth wedding anniversary is a coral wedding. Corals, formed from small calcareous skeletons of polyps, form entire coral reefs. And so the union of two loving hearts formed of a thousand days spent together, filled with mutual feelings and important events, and formed the whole island, called the family. 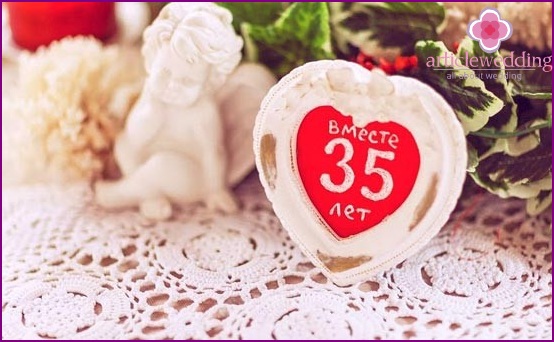 Now the marriage union is not only based on romance and love - it is firmly held together by mutual respect, care and gratitude for the years spent together.

It may seem strange to some that after this wedding anniversary some tender feelings may still remain, but, having crossed this particular line, the couple begin to realize how deep their love is. In addition, the experience of family life proves the correctness of the choice they made many years ago, in their youth.

In Russia, this wedding anniversary was called a linen wedding. It got such a name due to the fact that the ancestors compared the years lived together with the fabric, although woven from many fine threads, but very durable. The past years are spread out before the jubilees like a fabric on which all-all patterns symbolizing the events of past years are visible.

Coral wedding traditions are associated with the water element. Earlier that day, the couple went to the nearest body of water to give him a scarf of red (coral) color, as a symbol that they accept the wisdom of nature.

If the weather is nice outside, then it is better to organize a celebration outdoors, in close proximity to a river or a reservoir.

When setting the table, be sure to use coral color, it can be coral color napkins, a tablecloth or just decorative elements - candles, frames, etc. Also, as a color scheme for the holiday, you can choose marine shades - blue, blue, turquoise. Decorate the table with shells and sprigs of coral. 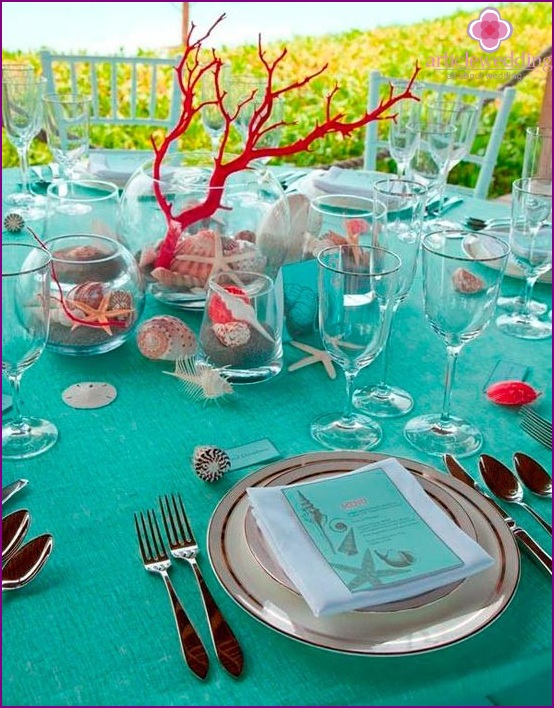 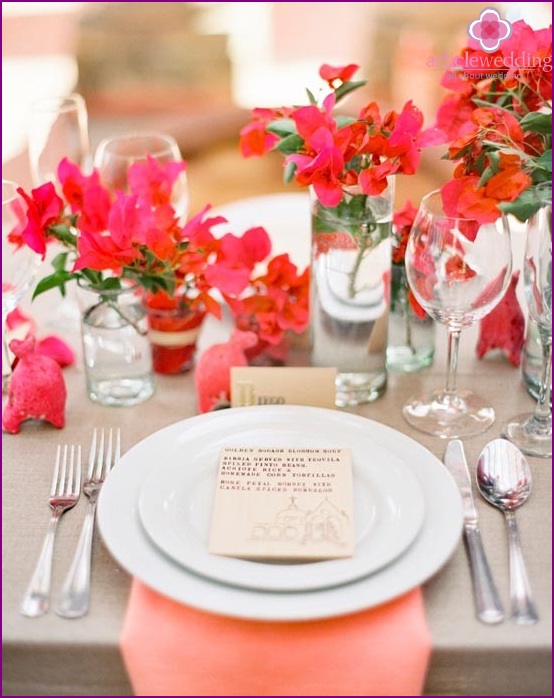 If you decide to celebrate a coral wedding at home, then it is worth considering that, according to tradition, seafood and fish should be on the table, and as drinks - mainly red, aged wines, symbolizing the strength of marriage and your relationship. 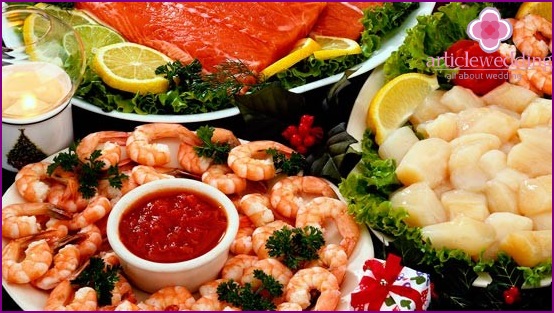 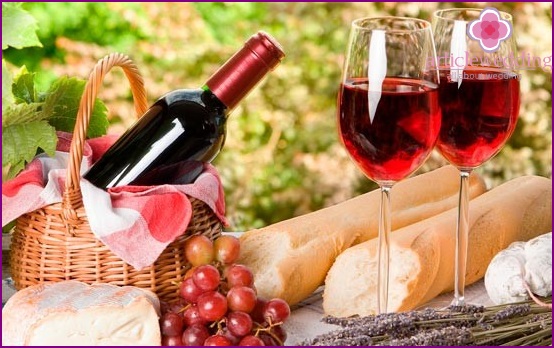 According to an ancient custom, a coral wedding is a time of passing on worldly wisdom to the younger generation. Therefore, on this day, the couple should write notes with the secrets of family happiness and, putting them in the box, hand them over to their grandchildren. And grandchildren should open this box only at their own wedding.

Since in Russia this anniversary was called a linen wedding, then there was then such an interesting custom as the making of the "canvas of life." On the day of this wedding anniversary, the 4-hand couple had to weave a piece of fabric. The quality of the woven fabric was judged on how the couple worked in pairs and how they lived these years. If there are knots and uneven weaves, then there are some grievances for which we should ask each other's forgiveness.

Coral wedding is a stunning anniversary, in which spouses will find many kind words and touching wishes from friends and relatives. You will find many beautiful congratulations in verses and prose here:

What to present for a coral wedding?

First of all, for this wedding anniversary, the spouses themselves give each other, and then they accept gifts from relatives and friends. Coral products, such as coral beads, a bracelet, etc. can serve as gifts for a wife. A wife can give her husband a real coral branch, which they put in their bedroom, as a guard of their happiness and love. 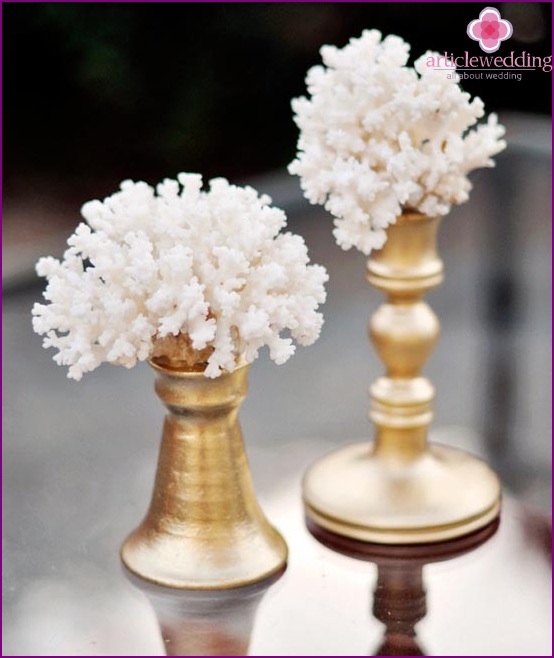 Children can give parents a real red wine that can tell a lot about the power of passion and love between spouses. 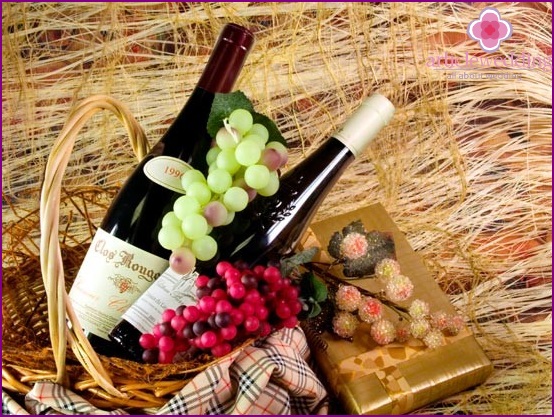 A wonderful maintenance of the tradition will be a bouquet of red roses, which the husband will present to his wife at the very beginning of the wedding anniversary. This will show that his passion has not yet died out, and for full compliance with traditions, the bouquet should consist of 35 roses. 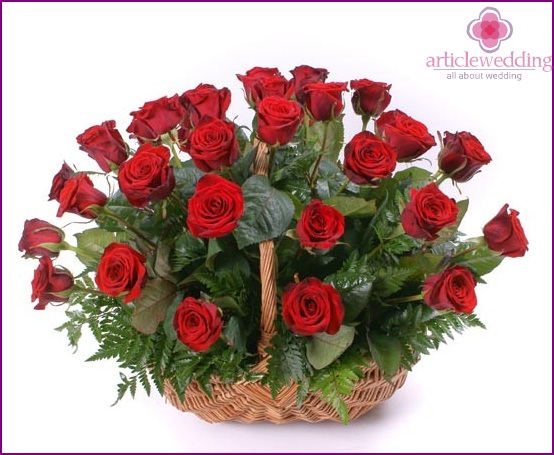 Guests can give almost any gifts for this wedding anniversary, the main thing is that they are connected with corals and the sea. A good gift would be a picture of the sea or rocks, as it is believed that water takes negative energy and brings peace and tranquility to the house. You can also give various amulets and charms of marine subjects, which will contribute to well-being and comfort in the house. Guests can surprise spouses with a nautical-themed cake. 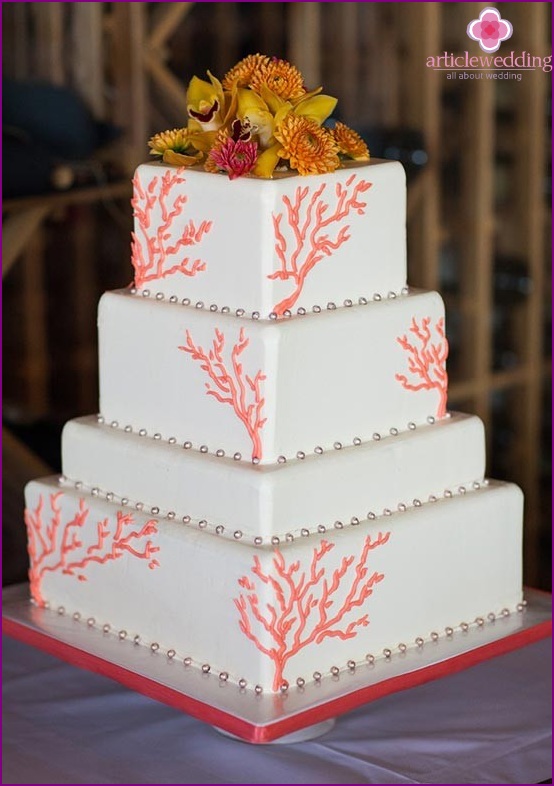 Since this wedding anniversary is also called linen wedding, you can give spouses something from textiles, but always of a marine theme. For example, it can be nautical-style pads. 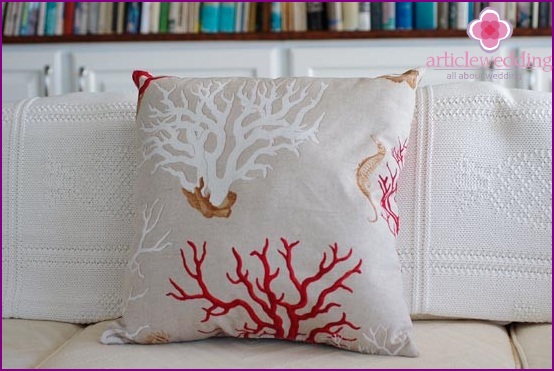 Wedding bouquet for the bride from the ...