In anticipation of a happy moment of marriage, many newlyweds and their parents are puzzled by the organization of the wedding. Everyone cares about the same question: how to arrange a holiday that will appeal to young and old? A win-win option that can combine two or even three generations will be a thematic wedding in the style of the USSR. The older generation will happily plunge into the times of their youth, the Soviet era, and young people will be interested in the traditions of the USSR, which they have never encountered.

How to organize a wedding in the style of the USSR

First of all, it is worth recalling the features of that time: the abundance of symbols of the Soviet Union (Komsomol badges, a bust of V.I. Lenin, a banner in the corner), clothing features, a modest menu by today's standards, invitation cards. But first things first. 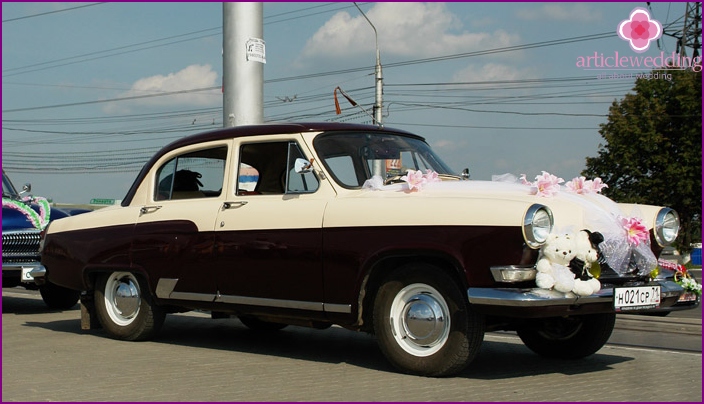 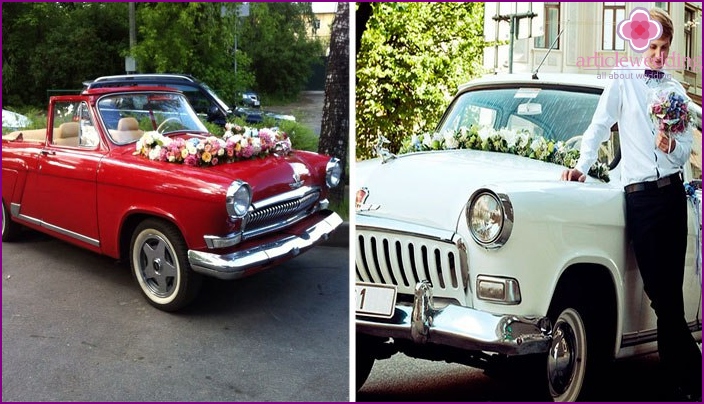 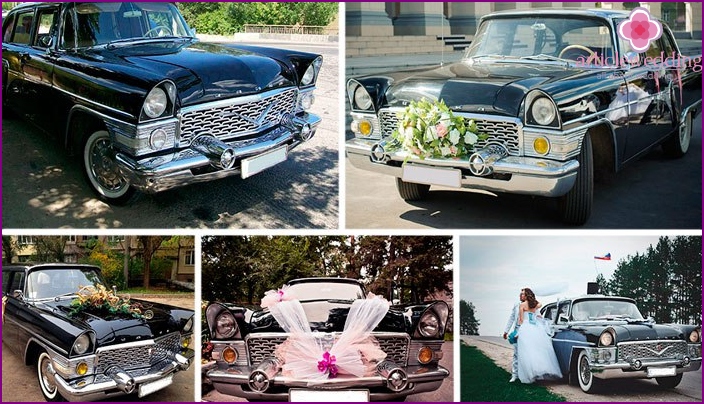 Young will go to the wedding palace by car «Gull» black color. Allowed to use «Volga» the same black or white. Such cars were real luxury, and in our time they are considered rare. The car is decorated with ribbons along the hood, and a beautiful wedding doll is seated on it. Wedding rings adorn the roof of the car - a symbol of wealth. Young people go to the wedding palace in one car. 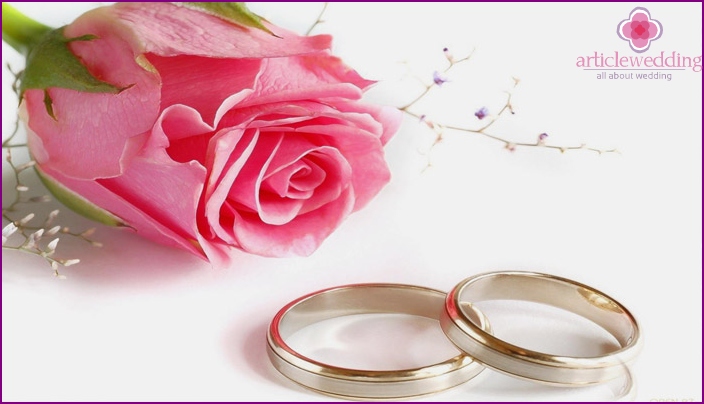 The bonds of marriage during the Soviet Union were held together by modest yellow gold rings, almost always without jewelry. In fact, the rings can be thin or defiantly voluminous, but it is worth remembering that they are worn for a long time, because you need to choose only those that the newlyweds will like. Engraving is allowed on the inside of the ring with a declaration of love, the names of the couple, the name of the future family. 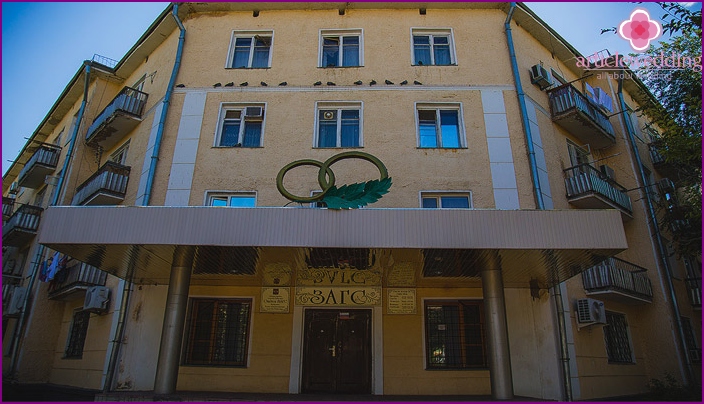 Young marriage registration has always been carried out in the registry office, no field events. Traditional for such a moment was the line that a young couple must survive before their marriage is registered. Brides compared themselves to other beauties, each considered herself stylish, better than anyone else dressed. An employee of the registry office necessarily made a pathos speech about the significance of the marital union for strengthening the society of Soviet people.

Room decoration in the style of the USSR

After signing the marriage agreement, the newlyweds and their guests go to a banquet. For these purposes, it is worth choosing a restaurant or dining room, as it was before, and here everything depends on the material well-being of the spouses or their parents. The hall is decorated by its own forces; active friends of the newlyweds are involved in it.

Holiday tables set with a letter «P» - This is a traditional location for the USSR. Guests are seated at long tables according to their own understanding:

Waitresses in bonnets and white aprons should serve guests. To create the illusion of those years, it is allowed to teach the girls not to yield to the guests, and sometimes to upset them with a sharp word, as was typical for Soviet waitresses. 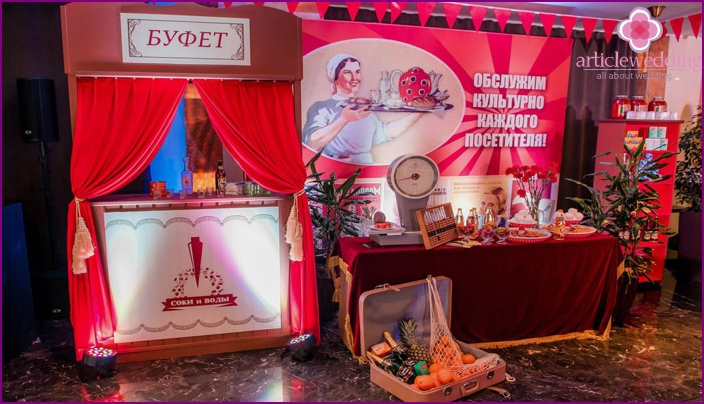 The hall, stylized as the USSR, can be decorated with artificial flowers of red color and colorful balloons. Another option allows hanging decor in the form of photos of the leaders of the CPSU, posters with slogans and jokes.

Behind the back of the bride and groom put the Red banner or a portrait of Ilyich. 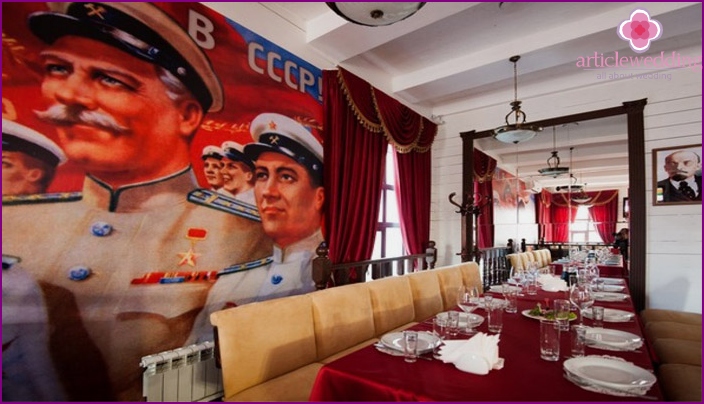 Chocolates are placed on tables in crystal vases. The vases themselves, as well as wine glasses are decorated with red bows, carnations. 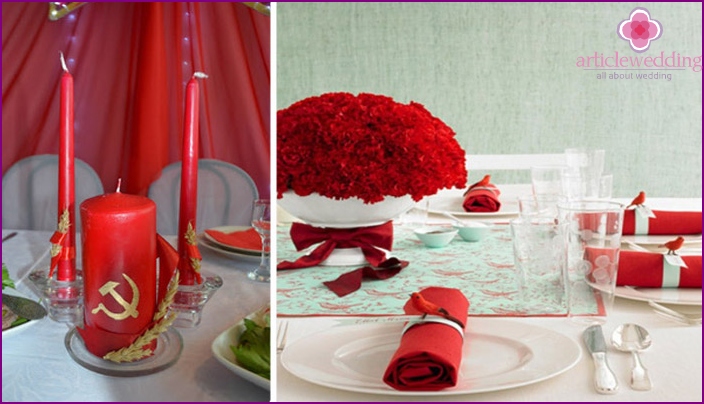 Tables with canned goods at that time were placed on tables. Both original cans and dummies are allowed.

The main traditional wedding cake is offered as the main dessert, but with the difference that this cake is decorated with an incredible amount of roses and butter cream curls. 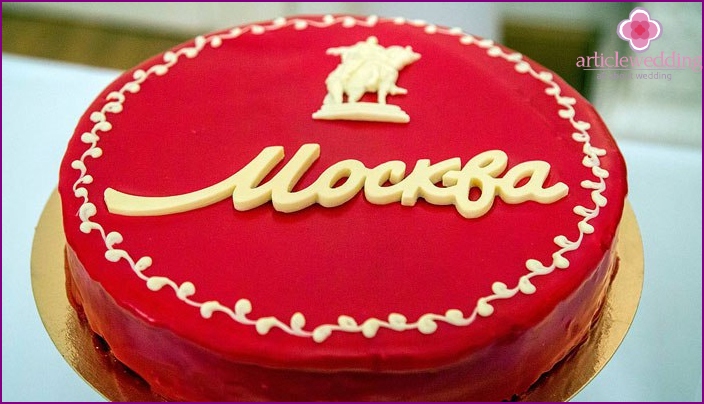 The image of the bride and groom 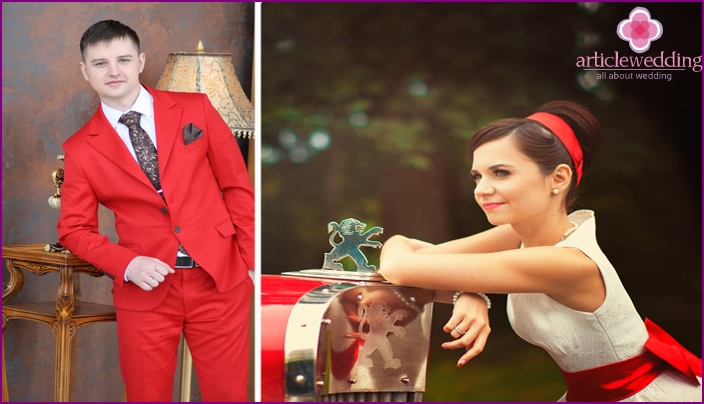 Images of the young should not contain excesses.

Scenario wedding in the style of the USSR 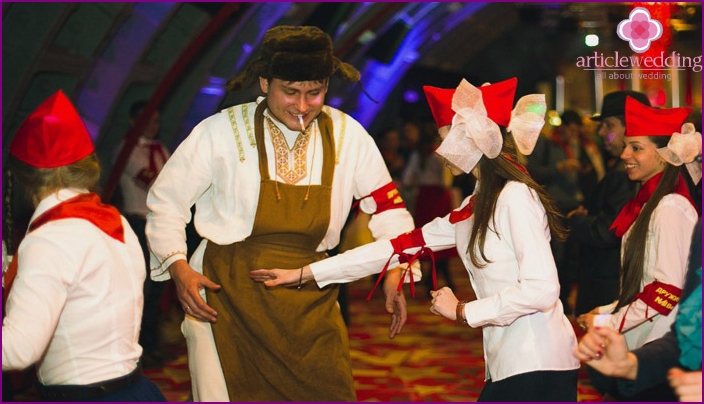 With the ransom of the bride begins a wedding celebration. It consists in checking the groom for his compliance with the requirements of relatives and friends of the bride. The ransom in the style of the USSR for the groom also means matching party standards of society. We offer to beat any option, up to «treatment» non-partisan bridegroom in the communist faith. Young must become a pioneer, Komsomol member. To become worthy, the groom passes a series of tests:

Finally, he pays the ransom with Soviet coins.

We have already talked about the marriage procedure, so we will immediately proceed to the feast. Families of young people think over a menu in advance, which contains the main dishes of the Soviet era - original salads. Not only were considered tasty «Olivie» and «Dniester», but also crab salad, herring under a fur coat, other. Meat and fish cutting was actively used in Soviet times, even the level of wedding was determined by it, because balyks and cervelat, salami and basturma were a real shortage.

The Soviet wedding was distinguished by genuine fun and a large number of speakers. In the process of congratulations, they gave young people gifts, money to help start their life. To preserve the style of the USSR, the congratulations of the guests contain an idealistic component of those years: «For the Motherland, for the Party, for Lenin».

At the wedding, stylized as the USSR, musical accompaniment is performed by invited musicians with a repertoire of popular Soviet groups - Gems, Pesnyarov. They will bring to the era of the USSR a selection of songs by Rotaru, Pugacheva, Okudzhava and the music of foreign stars: Dina Reed, Joe Dassen.

Tamada demonstrates a film with shots from the family archives of the young, reminiscent of a newsreel program «Time», the most popular program of the USSR, praising the newlyweds - worthy builders of a new cell of communist society. The event ends with a speech congratulating the entry into a new bright life.

The celebration, stylized in the spirit of the USSR, will be a gift to everyone present at the wedding. It will unite two different generations. Will fill the hearts with joy and fun.