Famous people, like ordinary people, also want happiness, plan weddings, create families. Sometimes their celebration days resemble competitions: who has the most beautiful dress, the most chic banquet, the largest wedding cake. The unique works of confectioners attract attention no less than «star» gifts or place of marriage. Celebrity wedding cakes themselves become heroes of secular chronicles, like the groom and the bride.

What is so remarkable about royal wedding cakes? First of all, an impressive size. Sweet dessert must be commensurate with the scale of the state celebration. For its manufacture, the best confectioners are involved, only the most selected products of the highest quality are used. At royal weddings repetitions of recipes, decorations can not be. For the top officials of the country, even dessert should be exclusive.

The wedding of Princess Diana and Prince Charles took place on July 29, 1981. It is considered the most fabulous, beautiful in the last 100 years. The reception was held on the territory of Buckingham Palace and was designed for 120 people. 27 cakes were prepared for the celebration. The most important wedding cake had 5 tiers, was made in two copies, it was presented to the newlyweds by the Armed Forces of Great Britain.

A pastry chef named David Avery worked on cakes for 14 weeks. The dessert, whose height was 5 feet (a little more than one and a half meters), was decorated with bouquets of lily of the valley, roses, orchids. On all sides on the cake were the coats of arms of the prince, the royal family, the initials of the newlyweds. Unfortunately, one of them was damaged during transportation; it was given to the workers of the naval kitchen. Another cake created by the famous Belgian «baker of kings» S.G. The maid of the London residence, after 20 years, was able to sell the piece of cake she received then for one thousand pounds. 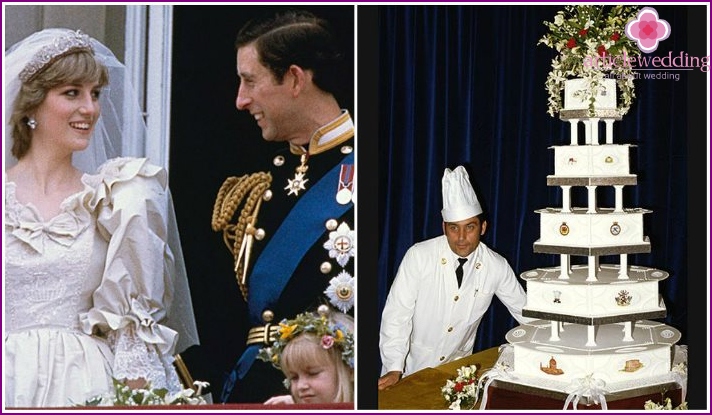 The wedding ceremony of Prince William and Kate Middleton took place in 2011. Among the dishes was presented a fruit cake with candied fruits, nuts, consisting of 8 tiers. The newlyweds took the top 3 layers for themselves, and the rest was cut into equal portions, distributed to the guests. A sweet treat was made by a company that had already glorified itself at the wedding of the parents of Prince William. The story of the auction and with a piece of cake repeated. One of the guests decided to make some money on it, put up a lot, attaching a wedding invitation to it, printed on the Queen's stamp paper. 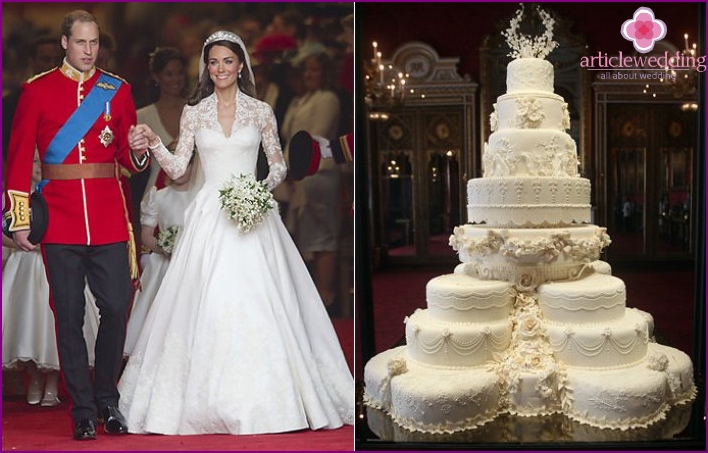 Prince Philip and Queen Elizabeth II, the parents of Prince Charles, celebrated their wedding on November 20, 1947. As at all festive events, the cake was an obligatory item on the menu. It was so impressive that it reached 9 feet in height (2.75 m), weighed 250 kilograms, while it had four tiers. In the postwar years, there was a shortage of quality products, so many ingredients for the work of confectioners were sent from abroad as gifts.

Confectioners of the company Mc Viitie and Prace LTD, making this work of art, were able to decorate the cake with monograms of the newlyweds, fragments of the arms of both families. The sweet figures of the bride and groom captured the moments of their favorite pastimes. They cut the cake with a wedding present from the English king of the Duke of Mountbatten - a saber. For charity purposes, pieces of dessert, as well as other products were distributed to schools, hospitals. 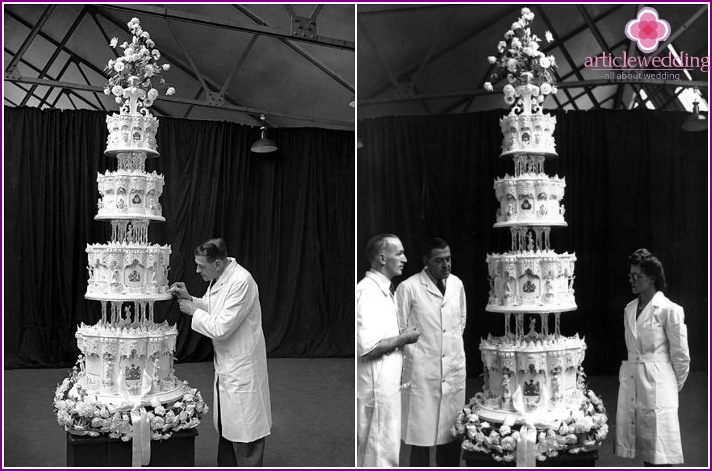 On the day of their wedding celebration in 2001, the Crown Prince of Norway, Haakona and Princess Mete Marit, received a surprise in the form of a cake, which weighed 140 kg, was about 2.70 meters high, contained seven tiers. The main decorations were in an unusual historical and patriotic Norwegian style. Viking ships took pride of place on the tiers of sweet treats. The biscuit was abundantly saturated with rum, stuffed with a lot of raisins. The first piece of the famous dessert, the newlyweds were cut off with their own hands.. 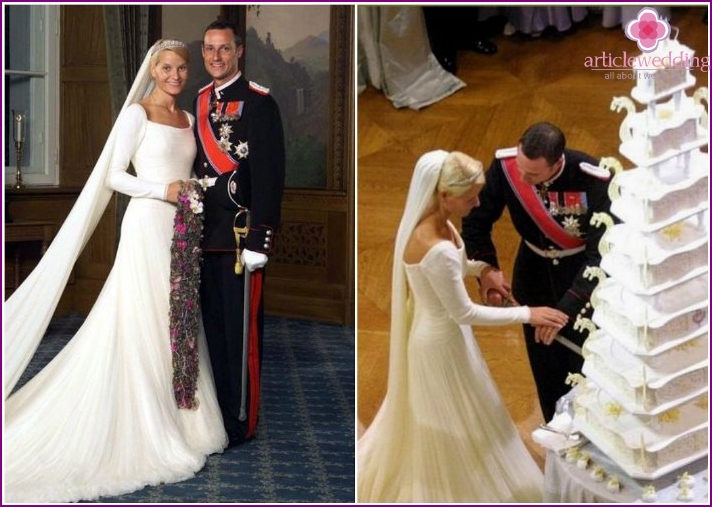 Some examples of celebrity wedding cakes are truly masterpieces of culinary art. Therefore, each wedding ceremony is regular «starry» couples of newlyweds attract the attention of millions of people around the world. Many pastry chefs take notes of decorations, the composition of famous desserts, and then offer similar items for the wedding of ordinary newlyweds. After all, a cake is a beautiful climax of any wedding celebration.

Actors Katherine-Zeta Jones and Michael Douglas are considered the perfect couple in Hollywood terms. By the day of their marriage in November 2000, the confectioners made five tiers of cake with a height of more than 120 centimeters. The authorship of this work belongs to Sylvia Weinstock, one of the top five most expensive, famous confectioners in the world. To decorate the dessert, several hundred flowers made on the basis of sugar glaze were needed. The cost of a chic dessert was 7 thousand pounds (10 thousand dollars).

Hollywood actors Tom Cruise and Katie Holmes on their wedding day November 18, 2006 presented guests a cake of unusual beauty. The stunning five-layer miracle was made of white chocolate with marzipans in the form of roses. Under the sweet crust hid the most delicate mousse. The guests were delighted with the taste of the confectionery masterpiece. Experts called this wedding fabulous largely due to the unique cake.. 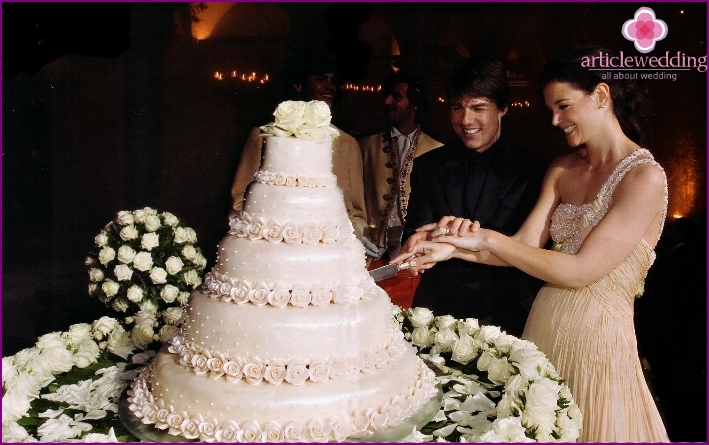 At the wedding, Eva Longoria and Tony Parker 07/07/2007 surprised everyone with a bright red vanilla cake, 5 tiers of which were strewn with red roses. The saturated purple color attracted the eye, echoed a shade with the dresses of Eve's girlfriends and the bride's bouquet, composed of white orchids, red lilies. The top of the dessert was decorated with classic figures of the newlyweds. Famous California culinary specialist Sam Goldfrey made this miracle with skill and love. The cost of this unusual dessert exceeded 40 thousand dollars.

The star wedding ceremony of pop star Cristina Aguilera and music producer George Bratman was held in Spanish tradition in November 2005. The climax of the celebration, its most striking moment was the removal of a huge cake, which guests compared with an iceberg. The chic dessert was covered with white chocolate, decorated with bright pink flowers, cream lace. 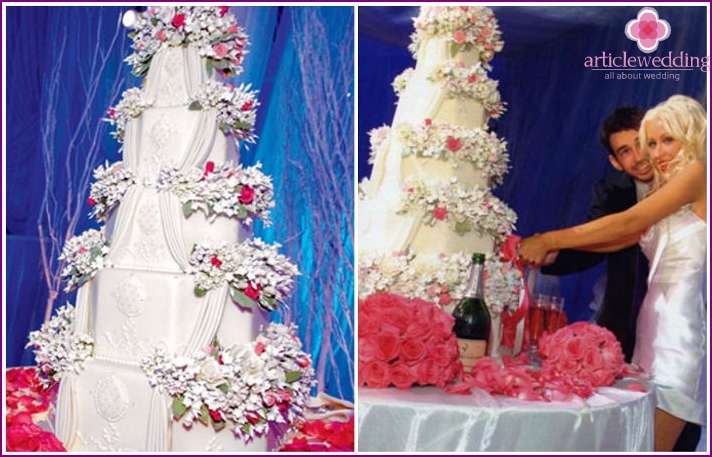 The famous wedding of model Melanie Knauss and the extravagant billionaire, the owner of a large number of real estate around the world, Donald Trump surprised not only with the amount of money spent (it is believed that at the time of 2005 it was the most expensive wedding in the world), but also with a luxurious cake weighing 23 kilograms, high one and a half meters. Seven tiers of cakes were saturated with Trump's favorite drink - orange-cognac liqueur. On the surface of the cake were thousands of icing flowers. Famous confectioner Cedric Barbaret became the inspiration. 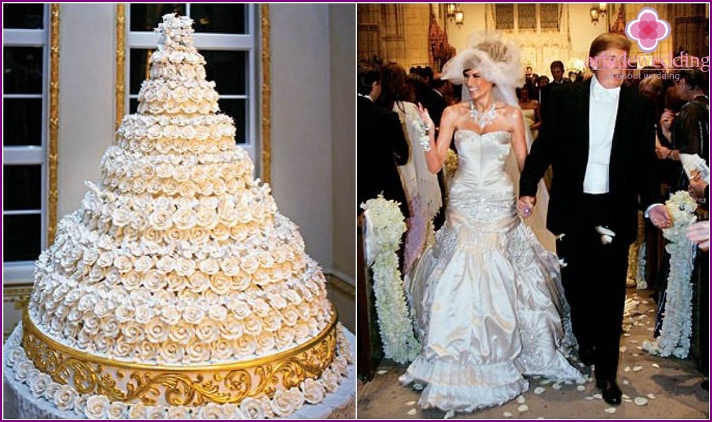 Kim Kardashian did not trust anyone to choose the famous wedding dessert; in August 2011, she went to the confectionery shop herself and chose the best one. The whole party of the socialite and the famous basketball player Chris Humphis was held in white and black colors. Even the wedding cake fit into the dress code of the celebration, it was made in two contrasting colors. Six-tier cost «towers» amounted to 20 thousand dollars. 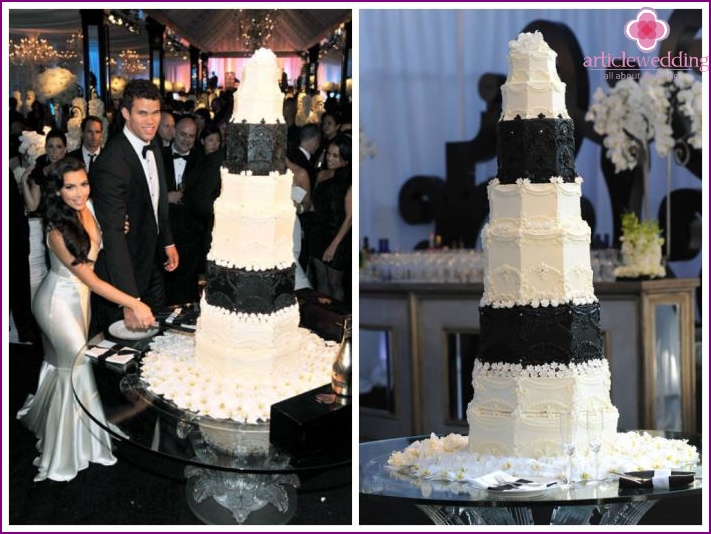 The wedding of the famous skater Evgeni Plushenko and socialite Yana Rudkovskaya took place in Moscow on September 12, 2009. A large number of guests were shocked by the scope of the celebration. But the highlight of the wedding party was a huge cake. The height of the masterpiece of confectionery art was about two meters. A large number of edible flowers were crowned with figures of the newlyweds, precisely copied from the originals. After the first dance, already as legal spouses, Yana and Eugene cut five tiers of the giant cake, which was presented to them by the confectionery «Pushkin». 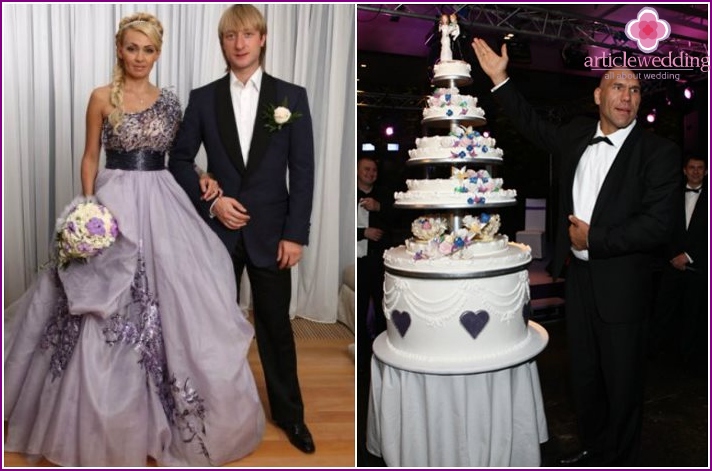 The wedding of musical representatives Ashley Simpson and Pete Wentz was held in the style of a fairy tale «Alice in Wonderland». The cake was an original edible composition of a green cylinder hat, a clock, a tea cup, and flowers in a pot. The vanilla wedding cake included a lot of raspberries mixed with chocolate chips. It is considered the most original cake among similar famous desserts.. 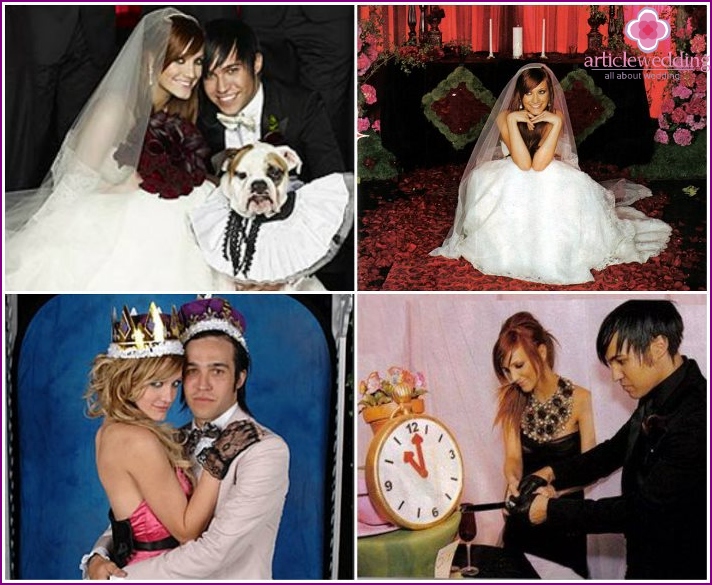