Redemption of the bride in the style of Russian Railways

The atmosphere of the Russian railways is extraordinary: it's noisy, funny, a little drunken neighbors, a musician with a guitar in a nearby compartment, conductors who rush from passenger to passenger and offer to buy tea with cookies, sellers with carts, families taking pre-cooked food from packages - cues, salads, etc. The ransom in the style of Russian Railways is an original event-presentation, which helps to create a fascinating adventure for the groom in a train rushing in the direction of family life.

Redemption is traditionally done by bridesmaids. For the event to go perfectly, they will have to take care of a thousand little things that will create an interesting atmosphere of the railway: they will need to come up with a fun, original script, learn the roles with all the ransom participants, hold rehearsals, prepare props, arrange the premises in the style of Russian Railways. If financial means are available, girls can hire a professional toastmaster who will help them in an exciting way to ransom the bride.

An important role in creating any thematic buyback is played by props, which can be done and prepared independently or found in stores. Here are the necessary things that will help in creating the mood of Russian Railways when buying a bride: 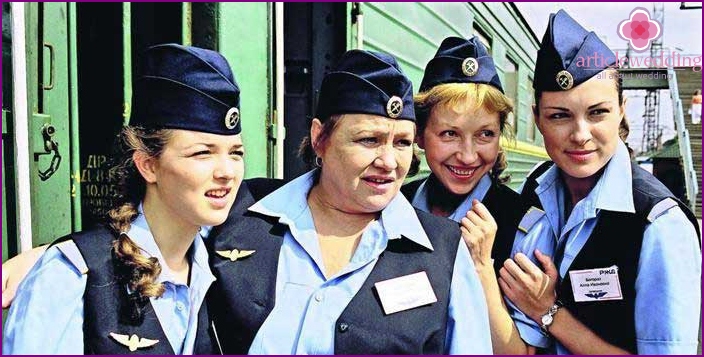 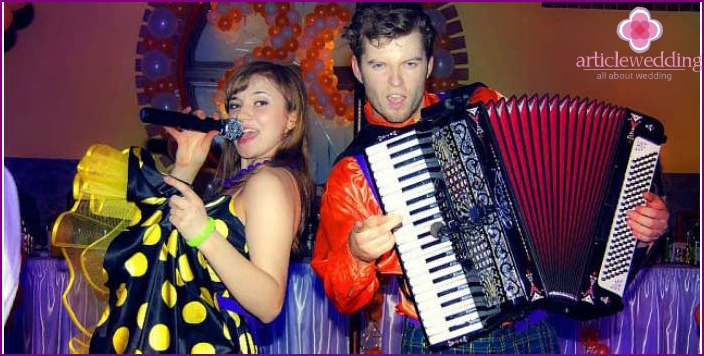 The main characters of the ransom, stylized as Russian Railways, which will provide a unique atmosphere of the ransom:

For the ransom to be interesting, you should decorate the room with appropriate things, draw posters with a funny train arrival schedule at the station: for example, the village of Eternal Love, the main station of the town of Tenderness, s. Voluntary dishwashing station, etc. Of great importance is the music that will sound during the ransom - it can be any composition related to Russian Railways. Girlfriends can also call musicians accompanying the ransom of accordionists, accordionists, guitarists.

When the bridegroom with his retinue drives up to the bride's house, the ransom of the Russian Railways begins. There is a table in front of the porch with a sign on it «Cashbox», a witness is sitting at the table, she is a cashier. The hero of the occasion approaches the leader, she looks up:

- Hello Young man. Where are you going?

The groom replies that he needs to meet his bride, calls the name.

- And, I know, I know, she just recently bought tickets for herself and the whole family, instructed you to pick them up. To get tickets, you will have to give the names, surnames, patronymics of her relatives, pets, the only way I can give you a ticket.

The future spouse calls the names in full or pays a small ransom.

- Alright, alright, get your tickets. Will you take it yourself? You can’t get on a train without a ticket to family life, we have «hares» strictly...

- The groom buys a ticket from the host, gets on the platform (first floor) of the entrance, where the witness conductor meets him.

- Good afternoon, present a ticket ... Yeah, I see. You are the bride. You know, this lady came on our train, said she would be waiting for you on the territory of one of the cars, in the compartment. But I just cannot entrust this important information, I have to prove that you know who you are going to. This girl prepared the questions: the numbers that you will name as answers to them are the numbers of the carriage and compartment. Ready to answer?

The betrothed says he's ready. The conductor asks questions related to the bride, the answer will be numbers indicating, for example, foot size, weight, waist circumference. If the hero of the occasion answers everything correctly, then he proceeds to the next ransom test, if not, he pays money to find out information.

“Well, I see, you have prepared and know your bride well.” Show passport.

- No, I can’t understand, my vision was completely wrong ... I just won’t let it go! But I knew that this would happen, so I asked the bride to make a list of your personal signs that will definitely show whether you are the very man whom the girl is waiting for. Here, for example, it says: snores in a dream. Do you snore in your sleep? Show how you do it!

The narrowed bride performs the task.

- Yeah, I believe! Seem to be. But that's not all. It also says: she dances well. Do you dance well? Well, show me, just turn on the song!

The conductor takes out the phone, turns on a funny melody or song, the groom begins to move. The presenter addresses the retinue of the narrowed:

- What are you worth, pick up!

Culprit celebrations with friends dancing all together.

- Fine, I believe, I believe! You are really good at dancing ... There is a small note, I’ll read it now: it can solve algebraic equations. I'm not a mathematician, so the bride herself provided an example to you, look.

The ransom presenter holds out a piece of paper with a simple equation to the groom, he decides.

“Well, she wrote me the answer too, it turns out, right!” It looks like you are the one you impersonate. Come in, please, I will come to you a little later with the linen.

When the groom gets to his compartment (next floor), he is met by fellow travelers with a musical instrument (accordion, guitar).

- Oh, what a guy came to us! Hello, let's get acquainted. I’m Vanya, and this is Sanya.

The hero of the occasion replies that he is going to his beloved bride.

We’ve already sentenced a little cognac here ... we’ll treat you if you will sing fervent ditties with us. Sanya, about whom we will sing?

- Come on about my mother-in-law! Our guy will have to spend a lot of time with her, let him prepare for the meeting.

- First you listen, and then backwaters with us!

Fellow travelers give the text to the future spouse, the first time they sing a ditty together, the second time together with the groom. After a few short songs, fellow travelers say with satisfaction:

“Well, you’re a good guy, and your voice is beautiful, you won’t say anything.” Stay with us, sit, drink, eh, still sing!

Suspended refuses, says he is in a hurry.

- Well, if such a thing, then go in peace! I wish you happiness with your bride. And with the mother-in-law!

The future husband goes further, sees a cart with souvenirs and various kinds of printed materials - newspapers, magazines, postcards. Next to the trolley is a salesman who, seeing the groom, immediately begins to say hello:

- Hello! Newspaper, magazine do not want? We have souvenirs, you will not come empty-handed! Here's a fan - tomorrow they promised the heat, buy it. There are still many-colored scarves, women love very much! We also have books for adults, so as not to miss the road ... Do you want to? I can make a big discount.

The newspaper man winks at the magazine as a playboy, but the groom refuses.

- Ah, I get it! You go to the bride. They told me about you and that you will refuse everything, even at a discount. Well, I have a separate offer for you ... although not a proposal sooner, but a task. The bride asked you to compose a message for her, and I will deliver it while you go. Here are magazines, scissors, glue and a leaflet: cut out words from covers, make sentences, glue on paper...

The groom and the witness choose the words, compose a message, give it to the seller:

A newsboy picks up a piece of paper, quickly runs to the bride, and at that time a conductor with sets of linen approaches the groom.

“Oh, and tired while she followed you!” Far away from your carriage ... Will you take the laundry? Give me the money. Which?

The groom pays, then selects linen with one of the prints, depending on the picture, the conductor makes different replicas. For example, if the narrowed chose silk red underwear, the host says:

- I see someone is waiting for a passionate night!

If with a children's print, then:

- You need to rest too. On such linen beautiful dreams will dream!

The fiancée appears on the territory of the car (in the apartment), in front of the compartment (room) where the bride is hiding, there he meets the head of the train - her father. He holds a box from which you can see ribbons of different colors.

- Congratulations, young man, you have passed all the trials of the ransom of the bride. The last thing left is to choose the key that leads to the treasured door. What color does the bride love more than others?

Married chooses. If he does not guess, he pays a ransom for the next attempt, until he reaches the key. After the key is found, the bride’s ransom ends, the future spouses meet.

See another interesting example of a bride’s ransom for a traveler - airline style:

Redemption of the Russian Railways bride is an unusual way to hold a traditional event. Preparation of games, competitions, trials, the creation of a suitable style of room decoration, good acting skills of bridesmaids will help make the ransom performance unforgettable.