Redemption of the bride in the style of a railwayman

The ancient bride’s ransom ceremony has changed since the time of Russia, acquired the features of a theatrical performance. Now the organizers of this event are trying to make his script an interesting, original, maximally suitable pair for the sake of which it is created. The ransom of the bride in the style of a railroad worker is an interesting adventure that the bride and groom will have to go through. This theme is ideal for men working in this field, as well as those who carry the true spirit of a traveler.

To prepare an event that will make the beginning of the wedding day truly exciting and festive, you need to make an effort, but they are worth the result. The girlfriends have to create a scenario, which will include interesting fun contests, unusual thematic tasks, trials of the hero of the occasion for strength, dexterity, love for the bride. The ransom will be perfect if the organizers first check the participants for knowledge of the text, conduct several rehearsals. 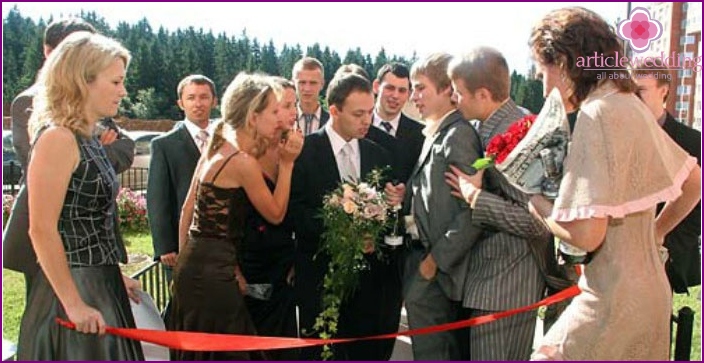 The creators of the script should remember that the ransom should not last more than 40 minutes, otherwise the event runs the risk of tireing the groom long before the start of the official wedding ceremony. To simplify the task of preparation, a professional toastmaster can undertake the ransom.

An important part of preparing a railroad ransom is the creation or purchase of the requisite property. Things that may be needed for competitions, creating an atmosphere:

The protagonists of the ransom bride:

The style of decoration should correspond to the theme of redemption of the railwayman. Street, porch, apartment of the bride can be decorated with posters, playful drawings, caricatures of railway workers. The atmosphere will be given by music dedicated to railway workers and travel in general. Girls can draw a funny train arrival schedule at the station, which can be called the city of Tenderness, village of Eternal Love and so on.

The ransom bride ransom begins when the future spouse drives up to her lover's house. He sees that there is a table in front of the porch, and behind it is a bridesmaid dressed as a guard. The groom comes closer:

“Good afternoon, young man?” Where are you going?

The hero of the occasion replies that he came to pick up the bride.

–Ah, the bride! One bride ran here in the morning, saying that she would hide in a train car, in the compartment. I can tell you how to find her. For a small fee...

-Good! We already had many suitors who tried to get to your beloved, but they could not pass this test. To find out where the bride is, you need to unravel the code. For example, tell me how old she is.?

The hero of the occasion is in charge.

-Correctly. And what is her leg size??

-Fine! The last question is what size ring does your bride wear?

The groom answers. For each mistake pays extra to the guard.

- Congratulations, you have passed a small test that gives you the right to catch a train! The numerical values ​​that we called are the number of the train, carriage and compartment. Only before you go on the road you have to buy a ticket to the ticket office. Good luck!

The future spouse goes to the next test of the ransom bride of the railwayman. It takes place at the entrance. Bridegroom is met by a bridesmaid dressed as a cashier of the railway:

-Hello! Where will you go??

The hero of the occasion calls the train number.

–Ah, this one! Good route, one of my favorites. The bride was in a hurry there this morning, you are not to her?

The groom answers in the affirmative.

“I recognized you right away!” As I saw, I thought that you were going there. This girl bought and asked to pick up a few more tickets that belong to all members of her family. However, I can’t give them out until you completely name the correct last name, first name, middle name. If you make a mistake, you will have to pay the full price of each ticket again.

The hero of the occasion passes this test of the ransom of the bride, giving the name of her closest relatives and the nicknames of the animals. Mistakes - pays. The cashier says with satisfaction:

- Yes, everything is fine here. Here is your ticket and tickets for her family. Go to the platform, the train is leaving soon. Lucky road!

Suzhenny passes on to the next tender for the redemption of the railwayman. On the platform of the hero of the occasion, the bridesmaid, dressed as a conductor, meets:

The conductor checks the ticket, then exclaims:

–That you came for the bride! All clear. Now I will check compliance.

The presenter squints, trying to determine if the groom looks like a photograph in the passport.

-I do not know! My vision has been failing lately ... I can’t guarantee that you are the bridegroom that the bride is waiting for ... But we foresaw this! She left a list of your personal signs that will help me determine the truth. Without this test, I'm afraid you can’t get on a train...

The conductor takes out a sheet left by the bride, reads:

Groom shows how to cook.

- You know how! And it also says: a good driver. We will check now!

The bridesmaid takes out the designer car and suggests collecting the narrowed.

“Yes, you are fine with the machines!” There is something else. It says that you sing great. Sing something romantic!

The hero of the occasion passes this test of the ransom of the railwayman. The bridesmaid says with satisfaction:

-Perfectly! Your identity has been verified. Come in!

Further, the future spouse meets fellow travelers who sit at the table with chopped lard, vodka, and hold guitars. They greet each other kindly:

-Hello! Sit down to us, drink, have a bite, sit as it should!

The groom refuses, says he is in a hurry to the bride:

–We saw the bride, a real beauty! But as they say, the more beautiful the bride, the more dangerous the mother-in-law! You, the groom, have a means of fighting against her?

“Nothing, we will prepare you so well that no mother-in-law can stand it!” Come on, Vasya, backwaters!

One of the fellow travelers begins to play a melody for ditties on the guitar, the second sings a ditty about mother-in-law.

–Groom, sing along after the second time!

The culprit of the triumph passes this test of the ransom of the railwayman.

“You have a good voice!” Oh, it’s a pity that you are leaving, depriving us of a pleasant company. Well, good luck with your bride!

The future spouse goes further and meets the seller of newspapers.

- Hello, will you take the newspaper? Maybe a magazine! We have a new playboy here! So as not to be bored while traveling.

The hero of the occasion refuses.

- Maybe you will take it with a discount? I do not mind, but you are pleased!

“Well, you are so decent as you are going to the bride!” Stop ... You're to her, right? And as I did not immediately understand! Your bride asked me to put a message from the headlines when she’s very close, so you’ll have to buy some newspapers.

The future spouse pays for several print media, then passes this test of the ransom of the railroad.

–– A wonderful message! I’ll go tell the bride. Hurry up!

The newsboy goes to the bride, and the groom meets the conductor again:

-Hello again! You will take underwear?

The bridesmaid shows the betrothed several sets of bed linen. The future spouse chooses. Each set indicates its outcome for the next night: a children's print - conception, red linen - a passionate night, white - a dream. The bridesmaid says what the chosen underwear means, then adds:

“Well then, we are done with that.” Bon voyage with the bride!

The groom is waiting for the last test of the ransom bride of a railway worker - a meeting with the head of the train. In front of the room where the lover is waiting, her father or the girlfriend who is holding the box are standing: from there you can see several colored ribbons.

- Hello, groom! You have passed many tests, proved your loyalty, love for the bride and her family. There is one last thing left. Our bride loves one of these flowers..

The head of the train points to the box.

- A key is attached to the ribbon of her favorite color, which will open the compartment door. Choose!

The hero of the occasion chooses the tape. If mistaken, pays for the next attempt. When chosen correctly, the boss says:

The presenter leaves, the groom opens the door where the bride is waiting, the ransom of the railway worker ends.

Watch an interesting video with the adventurous ransom style of the bride, where many interesting ideas for competitions are implemented:

The ransom of the bride in the original style of the railwayman is an unforgettable event that will be remembered for a long time by all the guests present, as well as the newlyweds. Start preparing for it in advance, then the start of the solemn day will be perfect.