Each couple dreams that the wedding took place in an original way - from the beginning of the holiday to the end of the wedding celebration. A major role in this is played by the ransom style, which will be prepared by the narrowed girlfriends. The army ransom of the bride is a unique event, it will certainly please all participants. The groom will have to become a soldier in the army, and before that he will pass several tests, contests, complete tasks to prove that the bridegroom will become a real pillar of family life.

The preparation of this ransom is of medium difficulty. Girls should create an original, unusual scenario, think through contests that will become its basis - all of them must correspond to military topics. Girlfriends with a witness should make sure that the roles are learned by all the presenters, conduct several preliminary rehearsals - only then will the event go perfectly. Do not forget about decorating the house, porch with themed things..

The duration of the ransom should not exceed forty to fifty minutes so that the future spouse is not tired before a difficult wedding day. If there are funds, a professional host can become an assistant to the organizers.

For redemption in the style of the army will need the appropriate attributes. List of details required for the event:

The protagonists of the army ransom style:

The thematic style of decoration for the army ransom bride will help create a suitable atmosphere. Before the entrance, you need to install a table where there will be a sign «Draft point». Decorate the entrance with better painted posters, codes of military rules, adapting them to family life. Girlfriends can also pick up themed music that will sound during the redemption of the army.

Having approached the beloved's house, the future spouse sees that there is a table at the entrance, behind him is the bridesmaid, dressed in military uniform. On the table is a sign - «Draft point». When the groom comes closer, the leader pays attention to him and says:

- Oh, look, the newcomer has come! Would you like to sign up for a family service? There is a military ID?

The future spouse replies that there is no military card.

“Well, young man, we are always glad to see volunteers, but we just won’t let them go to the front.” You will have to undergo serious preparation before you receive the coveted permission. I hope, at least with a medical certificate, everything is in order?

The groom replies that there is no help either.

“You are disappointing me!” The first visitor to date, but do not come at all. Well - this is the direction to the doctor, check yourself, and then the march to the preparation! Forward!

The future husband enters the porch, where he is waiting for the first test of the ransom of the army bride - the medical board. The doctor is already waiting for the betrothed:

- Hello, rookie! I was told that you will come in, and they also said that you are in a hurry, it's true?

The hero of the occasion responds positively.

- Well, then for you the check will be accelerated, it hurts like it. Now we are simultaneously examining your eyesight and memory! I think this is enough for our small check to be considered valid. See - balls on the wall?

- Already good! You have to burst these balls with the help of special weapons (the doctor gives the groom darts). Do not forget to cover one eye with your palm before throwing!

When the future spouse hits, a note falls out of the ball.

“But this is the second part of your test.” On this note is a figure that relates to the bride. At the family service, remembering important events, dates is vital. Here, for example, is the number 23. What does it mean?

The numbers may indicate the bride's age, foot size, weight. The narrowed one answers. A ransom pays for errors or additional darts.

- Congratulations! Medical board passed. I wish you success in preparing and meeting with the bride as soon as possible. I will tell the general that you are a brave guy, so as not to make concessions. Go! 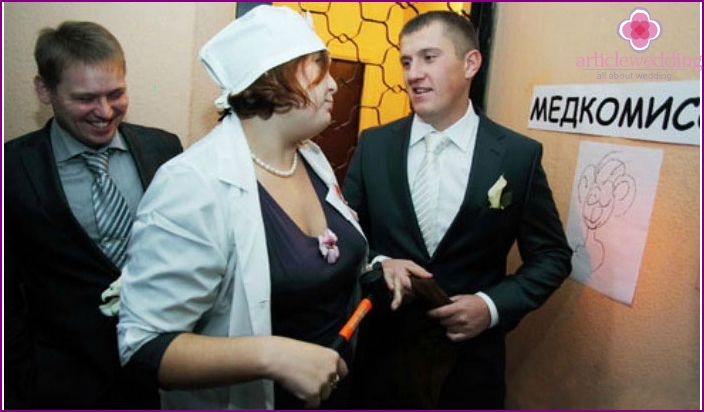 Next, the groom gets to the next test ransom bride army. There the bride meets the bride in a military uniform:

The culprit of the triumph becomes a rack «Quietly».

- Well, the groom, few come to the family service with such zeal, but we don’t need lazy people here, you won’t cool during the preparation. I express myself clearly?

- Good. Your first test as an ordinary is accuracy testing. The doctor told me that everything is fine with your eyesight, so don’t let me down, son! Love the bride?

The future husband replies that he loves.

- Let's see! A target hangs on the wall, which you must hit in the center if you really love. Which site you hit - that will be the reason for your marriage. Free!

There are other reasons besides love - «friends made», «no one to cook». Groom passes bride redemption test or pays army fee.

- Yes, the groom, you are a marksman. However, during the service you will need not only your physical abilities, but also your intellectual ones. The bride has left for you several abbreviations, the meaning of which is unknown to us. Decipher them so that it is clear - your mind is perfectly adapted to serve the army of the family!

In turn, the bridesmaid shows abbreviations - the groom must decrypt them. for instance, «VVM» - always take out the trash, «DC» - give flowers. If in this trial of bride ransom, the fiancé fails to come up with a decryption, pays money. 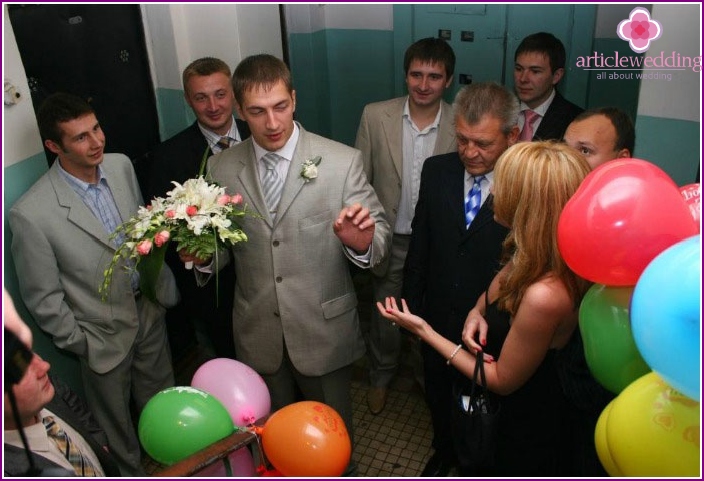 “I see your mind does a great job in critical situations.” But besides flexible thinking, you need serious knowledge that during the battle will not leave your head! We have a few questions about your bride - now let's see if you know her well. After all, if it’s good, you can easily resolve military family conflicts.

The bridegroom is asked questions about the bride; if she answers correctly, she goes on; if not, she pays a ransom. Commander:

- Well done! I’m sure you can easily resolve any confrontation thanks to your mind..

Leading with the groom goes to the next flight of stairs - the test of the ransom of the bride of the army «Minefield». Bridesmaid:

- So we come to one of the most dangerous stages of army training. This minefield responds only to grooms. One of our sappers left safe marks for you - traces that will help you get through. Remember that you can’t step anywhere except traces!

This test of bride redemption is complicated by the fact that the traces are not only on the steps, but also on the walls and ceiling. The betrothed must guess to ask the witness to carry him.

- Great job! I see that you have true friends who will not leave the battlefield. And now the last test awaits you.

The bridesmaid and future spouse enter the apartment, on the table lies a ball of tangled wires. Lead commander says:

“To prove that you are worthy of joining the army, you need to unravel the wires.” Every soldier who has undergone this training knows that all conflicts, quarrels, must be cleverly resolved - because they are the main danger to the family. You showed that you know how to achieve the goal. Good luck with this challenge.!

- Congratulations, young man! Your love, courage, dexterity do not cause us doubts. The last thing left is to solemnly take the oath of allegiance to his bride.

Leading include music, the hero of the occasion reads the oath.

“That's all: you became a soldier in the family service!” We wish you happiness. Let me join my beloved. Free!

After the words of the commander-bridesmaid lovers meet, the ransom army ends.

Watch the video of the original ransom of the bride, where a special military unit is involved:

Army cheerful ransom of the bride is a vivid performance that will surely be remembered for a long time by the heroes of the occasion, as well as by guests. Careful preparation, good organization of the process will help to create the perfect event..