When we talk about the Chicago style, we imagine the 20-30s of the last century. At that time, a prohibition was instituted on the territory of America that did not allow people to have fun legally, so there appeared bandits called gangsters, and in addition, the Italian mafia was in full swing, underground casinos, bars were opened, and smuggled alcohol. All these conditions have created a unique atmosphere that inspires people to this day. Chicago ransom bride will help plunge into it.

It is difficult to prepare such an event separately from the general concept of the wedding, therefore it is ideal if the whole celebration will be held in accordance with the Chicago or retro style. To recreate the unusual mood of Chicago in those years, the organizers will have to try, because you need to take into account everything: appropriate costumes, room decoration, music. A lot of time will be spent on creating a bride redemption script, rehearsing, inventing original contests and tests for the groom.

Usually the entire ransom falls on the shoulders of the bridesmaids, but if the financial side does not allow to realize it yourself, it will be appropriate to unite with friends from the groom. Buying a bride in chic Chicago style - an event the preparation process for which is labor intensive. 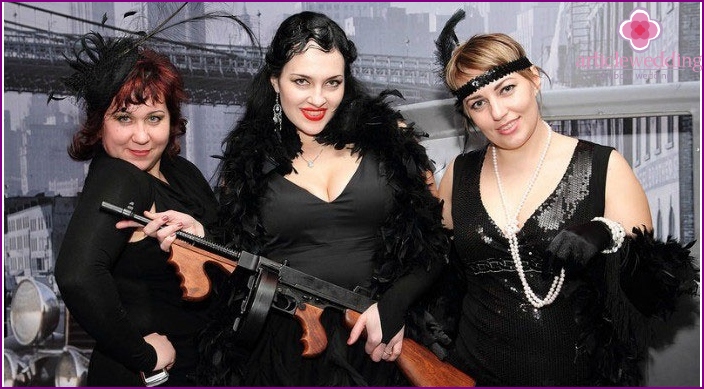 The list of props that is necessary to create the atmosphere of Chicago 30s during the redemption of the bride: 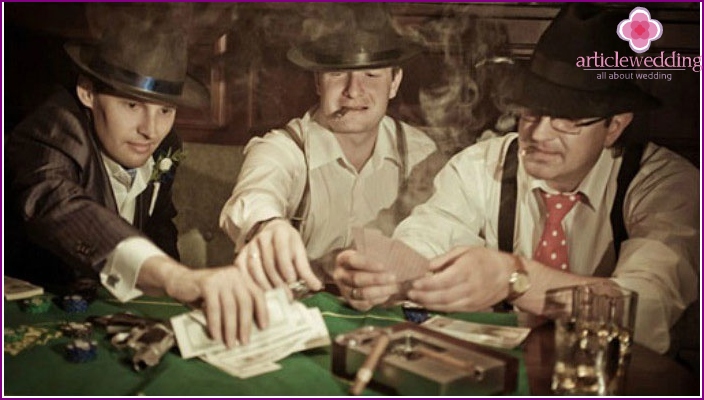 Depending on the specific scenario, the protagonists of the ransom bride of Chicago may be different. Examples of images that the presenters and participants can try on themselves: 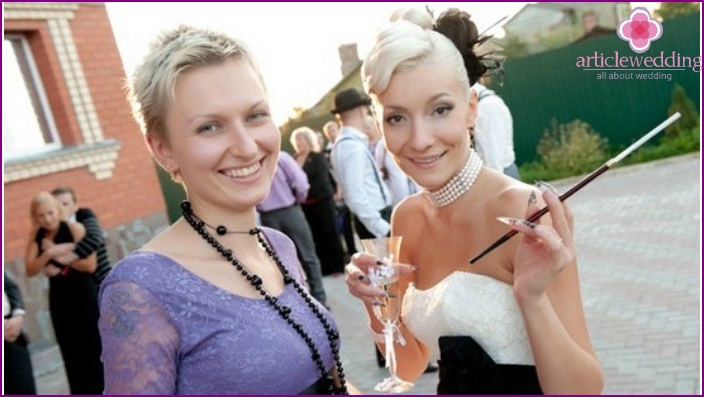 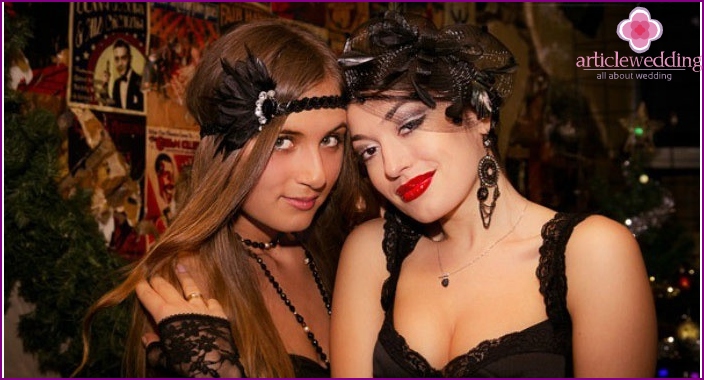 The mysterious atmosphere of Chicago of the 30s is primarily based on prohibitions, so the bride's ransom can take place in an impromptu underground casino.

Playing cards and dice on tables, teapots with alcohol (alcohol was served in such dishes during the prohibition period), photographs of wanted criminals and popular artists on the walls, windows, mouthpieces, ashtrays, a cigar table hung with dark cloth - these are all attributes of the Chicago style. The whole room should be decorated in black and red, and the door to enter «casino» hidden under dark drapes.

The ransom begins when the groom drives up to the bride’s house, rises to the desired floor. There he sees a table at which bridesmaids sit, dressed as bandits of the 20s of Chicago. On the table are cards, dice, and the girls themselves drink whiskey (strong chilled tea can also play the role of an alcoholic drink) from tea cups. When the hosts pay attention to the groom, one of the bridesmaids, pictorially leaning back, says:

“Well then, what a meeting.” Long time ago you, Don (Name of the groom), with your beautiful retinue was not in our area. Will you have whiskey boys? We have an excellent quality drink - only yesterday my father sent another batch of smuggling, we also got a few boxes ... Oh, wait! You did come for this, right? What, the casino bends without alcohol, and nowhere to get?

The groom replies that the girl did not guess, they came for the bride. The bridesmaid laughs:

- You decided to pick up our beauty? What an interesting move, though, girls?

Leading turns to the girls, they laugh with her.

“You know what strict laws are in our clan.” We simply cannot transfer our beautiful bride to someone else's family - we love her too much. Tell me, groom, you deserve a beauty (Bride's name)?

Suzhenny replies that it’s not worth it to find.

- I heard that you do business well, but I'm not sure that you can also get along well with the bride - her character is rebellious. However, we will give you the opportunity to prove that you are truly worthy of her, and how then to cope with her whims is none of our business. First you need to give us a small presentation.

The girl takes out a box of matches, so begins the first test of the ransom of the bride. The bridesmaid says:

- While the match is burning, you need to tell what good, useful qualities you have. Time has gone!

The host strikes a match, the groom passes the test.

- Yes, you love yourself - but you can’t help but love yourself, right? You came with a team that decided to support you. Now we will see how they really relate to you. Come on, witness, come here. While the match is burning, you must tell the best qualities of this man who have not yet been named. Getting started!

- Good! Well, groom, you have earned respect not only in criminal circles, but also among your closest friends and partners. That says a lot. However, you have to go through several more tests before you can see the bride's beloved. Are you ready for them?

- Then proceed to the next competition. Tell me, if your house is surrounded by a pack of cops, can you deal with them and protect your beloved? If they shoot mercilessly, to defeat! Now we will check it. Take a look at the wall.

The groom looks at the wall and sees a darts hanging.

“You need three attempts to hit the target.” You prove your accuracy and true intentions. Hold gun! 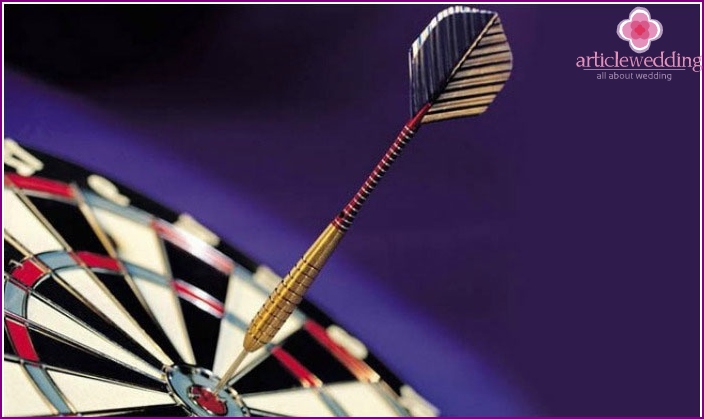 The bridesmaids give darts to the future spouse, he tries to get into «bullseye». Each dart zone has a reason for which he decided to marry (the godfather forced, the clan advised, for love). You need to get to the center - the zone, which corresponds to the reason «for love».

If the groom falls, the bridesmaid says:

- You are a good shooter and emotions do not cover your eyes! With every step you become more and more respected by our clan. Let's move on to the next challenge..

If the hero of the occasion misses, the ransom leader says:

- You shoot poorly, but I see that inside you are burning with love, so I close my eyes to your mistake for a fee, but I advise you not to be greedy! After all, our beautiful bride will have much higher requests: she is not used to living poorly.

When this bride ransom test ends, the girl pulls out a few sheets of paper that make up the bride’s portrait.

“We believed that you were a real fighter.” Now I will check your worth as a loving husband. Hundreds of men lay at the feet of our bride, trying to win her favor, poets dedicated poetry to her, musicians - songs ... And you dedicate some sweet words to her.

The presenter passes the sheets with portraits of the portrait to the groom:

- You need to make a portrait of these parts of the mosaic. But the essence of the task is different - each time, substituting a new sheet, say something good about the bride. How did she conquer you? What traits prevent you from living without her? Come on, get started.

The prospective spouse passes this ransom bride test. The presenter pretends to cry:

- Even my cold heart your words managed to melt! I understand why you will become a worthy party for the bride. Well, the last test remains - to guess which of my hands is the key to the door of your future wife.

Regardless of whether the groom guesses or not, the bridesmaid holds out the key to the bridegroom. Finally, the presenter says:

- Our families could not find a common language for a long time, but we simply did not know each other well. Now I see that you will be able to trust. I’ll talk with our father - after all these years, we will finally be able to become one big family. Girls follow me.

The bridesmaid leaves, taking the girls with him, the groom opens the door to the room where the bride is waiting, the ransom ends.

Watch an interesting video that perfectly illustrates the style, mood of the ransom of the bride of Chicago:

The Chicago ransom of a beautiful bride is perfect for an unusual active wedding. Dangerous gangsters, loaded pistols, incredible atmosphere - all this is an interesting performance, which will be attended by all those present. This style of bride redemption will help the heroes of the occasion to have a fun and original way to start the beginning of the wedding day.