Rite of the bridegroom: scenario

In ancient times, most marriages took place by prior arrangement of parents. Matchmaking was an interesting and beautiful custom, in which the bridegroom was introduced to the bride, describing the merits and best qualities. Now young people themselves choose a mate, but the tradition of getting married to their parents is still married. Learn the bridegroom rite: a detailed scenario of fun games, contests, rituals, this will help you have fun.

Previously, a noisy ceremony of matchmaking took place as follows: the matchmakers and the groom came to the gates of the bride’s house, they opened the doors and were invited to the room where the girl’s parents and their closest relatives were sitting (sister, brother, grandparents). The matchmakers were tasked with presenting the man in a better light. If he was rich, it was necessary to praise his merchants and financial opportunities, and when a man was working - «presented» his golden hands. The ceremony itself began with the words that the matchmakers said: «You have a product - we have a merchant».

After the bride came out, dressed in her most beautiful dress, and the matchmakers asked the question: «Is the girl skillful?» The girl took a broom, pretended to sweep the floor, then gave the home-made thing to her future spouse. Everything went in a half-joking manner. At the matchmaking, negotiations were also held on the dowry, the wedding was discussed. Despite the attitude of the parents towards the narrowed, during the first matchmaking, as a rule, he was refused. 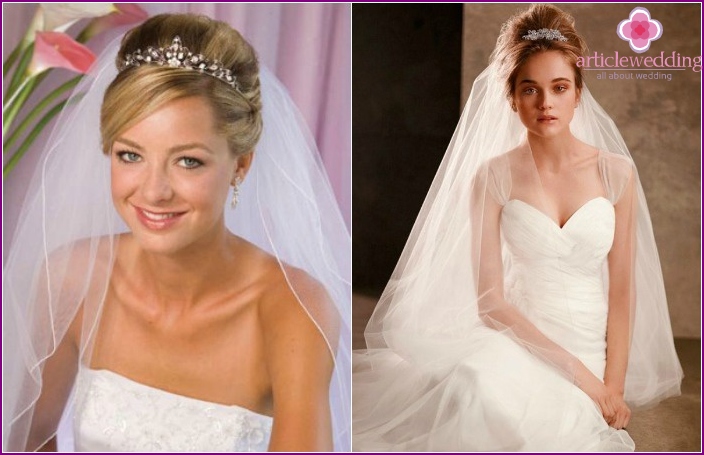 The modern ritual of matchmaking is the arrival of a bride narrowed into the bride’s house with a bouquet of flowers for the future mother-in-law and expensive alcohol for the father-in-law. There he announces a desire to marry, asking for blessings for marriage to their daughter. As a rule, a visit is official in nature, but there is nothing stopping you from making matchmaking a fun performance where you can invite other relatives and friends.

The matchmaker and matchmaker, who will participate in the rite, must be on the part of the bridegroom, although this rule is often violated. If someone from the bride’s relatives (for example, brother, uncle, sister) is well acquainted with the future son-in-law, they themselves can represent the man. It’s good if everyone will have similar costumes that fit the concept of the script.

Details for the ceremony

Props depend on which matchmaking scenario is being conducted. It can be musical instruments, various gifts for the mother and father of the bride, rushnyks, balls of thread, feathers, small trees, a hammer, pillows. Matchmakers, as a sign of generosity, the monetary viability of the narrowed, can roll a barrel of overseas wine, which immediately open for a feast.

With this begins the ceremony of matchmaking - «matchmaker first cup and first stick». Before entering, they bow. Only after crossing the threshold, the matchmakers should, with the help of hints, sayings, approach the main topic of conversation - the future engagement. Further, the matchmaking scenario provides for songs, games, praise of the narrowed. Then the hosts set the table, treat the guests with bread and salt, have dinner, when a certain time comes - give their answer.

A good example of how the ceremony of matchmaking is carried out, see the video:

Bargaining for the bride

Before the feast in Russia there was always a bargain. Usually, the bride was not present at this stage of the matchmaking, in order to avoid delicate moments: discussing the dowry, the financial condition of the groom, and the distribution of wedding expenses. Could casual concern a question of a possible date of an event. Only after bargaining did they call the bride. Within the framework of the modern celebration, bargaining can also be held, but humorous.

A feast is not only the consumption of food, drinking vodka, wine, but also the time when funny games, contests, rituals are held according to the script. During it, the mother and father of the bride, as a rule, give consent to the union, after which the groom puts a gold ring on the girl’s finger and the engagement is considered to have taken place. Then the relatives kiss the young, and the guests open the champagne to celebrate the beginning given to the new family. 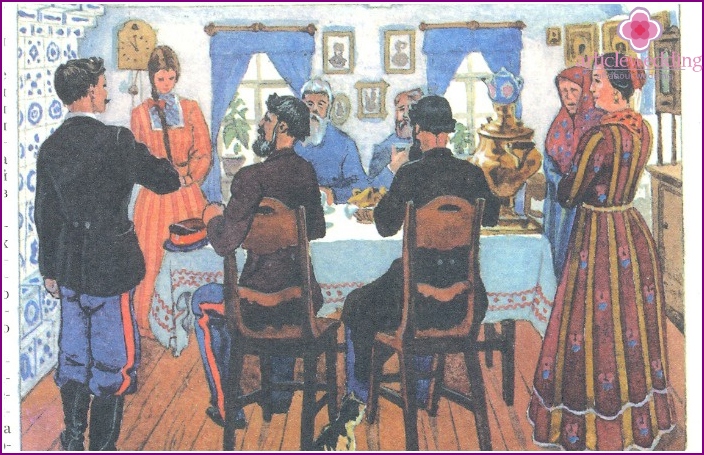 Trials of the bride

Trials for the bride are comic. She needs to show her economic abilities. The groom’s side asks the girl to give her a dish to try, demonstrate embroidery, sweep the floor.

According to the old Russian matchmaking scenario, the betrothed should bring the loaf to the bride. Accepting this gift, she agrees to the engagement. Then the future spouses take a knife and cut the product in half - if they can cut the loaf the first time without taking the tool, it becomes a sign that their life together will be happy. Instead of a loaf, the modern version allows the use of a delicious cake. Looks like a loaf for the ceremony of matchmaking, see the photo below. 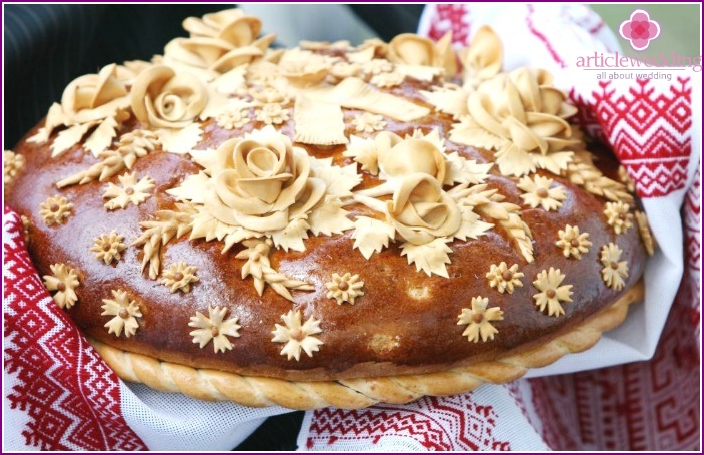 Speech of the groom

The matchmaking scenario necessarily provides for the groom's speech. After friends or relatives presented the man in a better light, the time comes for the narrowed «to lodge» vote. He must tell the parents of the bride about his love for their daughter, tell about how he will protect her, respect, value.

Presentation of gifts, what to give to matchmaking

Gifts for matchmaking can be different: flowers, fruit baskets, chocolate cake, jewelry for the girl and her mother (the future mother-in-law can give the bride a necklace or chain), alcohol, souvenirs. The main gift is a wedding ring.

To prove his love for the bride, according to the script, the following ceremony is carried out: narrowed to the bottom, he must drink a glass of honey.

Previously, this part of the scenario involved a discussion of financial issues - the amount of dowry, the cost of the celebration, the material security of the groom as a whole. The modern rite allows you to skip this stage. 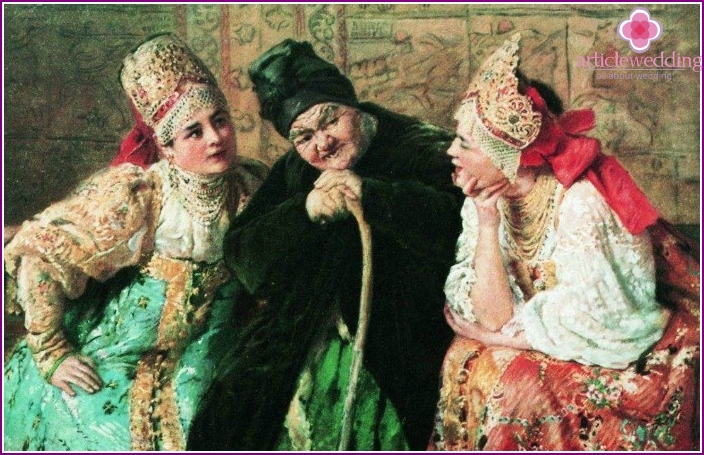 Fun contests will be a great addition to the noisy matchmaking ritual scenario. Here are some examples of ritual contests.

This game will show how well the future spouse knows the bride. He is being prepared with several questions that need to be answered correctly (future wife’s favorite dish, color, date of birth, angel’s day).

For matchmaking to be fun not only for young people, but also for parents, a competitive scenario is used.

The pair that wins all or most of the answers wins.

The scenario of this competition is as follows: the guests sing excerpts of wedding songs. The winner is the participant who will sing more songs than the rest. 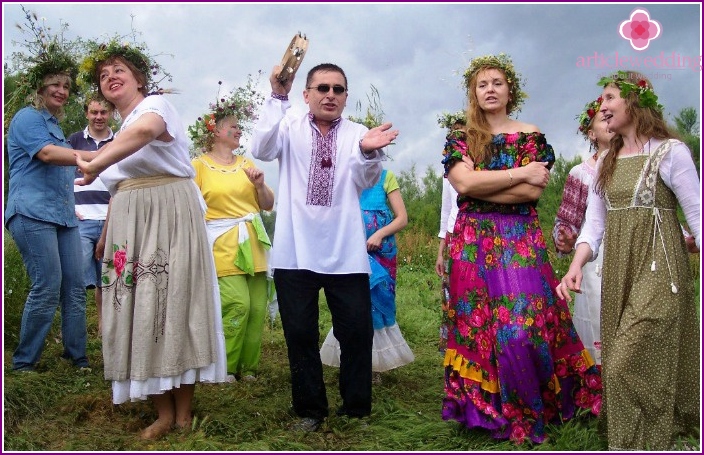 The holiday was held after sunset, so that unclean forces could not penetrate the house. It was believed that a marriage would be happy if, after the groom left, all sharp objects would be connected. After the guests left the house, the bride had to cry a lot, so that after the wedding, lead an unmarked life.

Matchmaking is an old tradition and a real theatrical performance. The ritual can be an interesting stage in preparation for the wedding, an opportunity for rapprochement between two families.

Will you celebrate matchmaking? What ideas did you like? Tell us in the comments.

The rite of matchmaking bride script