By itself, the tradition of exchanging wedding rings appeared a very, very long time ago. Even in ancient Egypt, people began to wear rings. First - from twigs, and only later the rings began to be made of wood, clay, and, finally, of metal. But their value, as a symbol of marriage, wedding rings received much later. The first steps towards this were taken by the Romans and Greeks. Although, today there is such an opinion of scientists: wedding rings invented ... the Slavs!

Our ancestors invented the ring, believing that the knot tied anywhere, namely the knot was considered the first ring, it is also a stake, a circle, protects a person from all sorts of evil forces. The circle, according to the beliefs of the ancient Slavs, has the same magic power. And much later than the appearance of the first rings, a circle that cannot be opened began to symbolize the eternity of the marriage.

In Christianity, the ritual of exchanging rings arose around the second century AD. The first rings were cast from bronze or copper, and much later, in the Middle Ages, wedding rings began to be cast from silver and gold. By the way, according to Christian traditions, wedding rings should be smooth, without any stones, patterns and inscriptions. But the desire of the beautiful half of mankind to have diamonds - and, preferably, more, because the best gifts to the girl, as you know from the song of a famous group, these are diamonds, made wedding rings from the tradition an ornament. So, in fact, there was a separation of engagement rings into engagement and, in fact, wedding. And engagement rings with diamonds became more engagement options, while wedding ones remained more strict. Engagement rings with diamonds were given and received as a gift, as a sign of consent to the family union. Well, the wedding ones were made in the form of a smooth closed strip of metal - silver or gold. 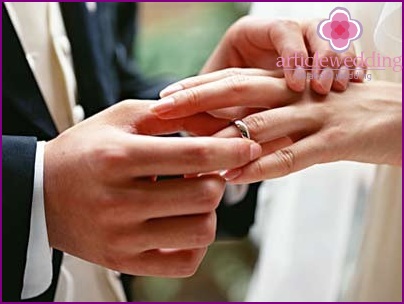 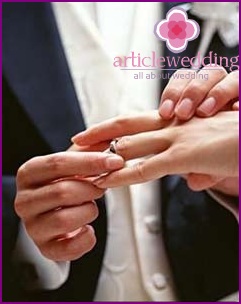 As the most striking symbol of love and fidelity, an engagement ring is the most important gift and decoration that a man presents to a woman in his life. The classic is a simple smooth ring of gold, or a smooth ring decorated with a small diamond. But there are white gold wedding rings, from platinum, and also decorated with colored precious and semiprecious stones. But, it must be said, the inconstancy of fashion does not prevent the diamond ring from remaining the most popular at all times. In the engagement ring, this gemstone is in a frame with cloves. It is thanks to these cloves that the stone becomes noticeable, since it rises above the surface of the ring.

It is the diamond that becomes the main component of the so-called “rich” engagement ring. He, in fact, eclipses with his radiance the gold of the ring itself. Although, of course, if the ring is made of a large amount of precious metal, it will eclipse any small stone. But in the case when a lot of metal was used to fix the diamond, the stone holds well in its frame. For reasons of mounting reliability, the best choice would be a platinum ring. For large diamond rings, this is the best material. Even thin platinum wires can hold the gem in the frame.

Nowadays, vintage rings are also quite popular - items of bygone days inherited by the girl from her grandmothers and great-grandmothers. By the way, they are different.

Victorian vintage rings made of yellow or pink gold. They feature a simple but original and elegant design..

In the heyday of the popularity of platinum, the so-called Edwardian engagement rings appeared. Around the same period, the world also learned about another type of wedding rings - rings in the Art Deco style. This kind of rings arose under the influence of ethnic motives of the East..

Today, there can be more than one gem in a wedding ring, but several. So, for example, a ring can be decorated immediately with three diamonds located in one horizontal row. Such a quantity of precious stones is far from accidental: each of the three diamonds symbolizes past, present and, oddly enough, future love. The size of diamonds is usually the same, but it happens that the average stone is slightly larger than the neighboring ones.

Another variety of engagement rings is tanzanite rings. This unique in its beauty gem was first discovered half a century ago in one of the countries of East Africa, by the name of which it, in fact, was named. A truly royal chic this stone gives to any engagement ring. The rich blue color of the stone with an exquisite purple hue will adorn both gold, and platinum, and silver - in whatever frame it is. The only thing is that it is difficult to cut. But if the jeweler tries, such a ring will be a real masterpiece!

The boxes of chocolates and candies with ...