A solemn and long-awaited wedding day should always be held in the style that the newlyweds choose. There are a lot of topics for the wedding, but the folk style deserves special attention. The holiday will combine not only specific clothes, but also the traditions of their ancestors. The Russian folk wedding costume should be on a special account, and you will have to choose it with all care, it is advisable to even recall historical facts. And grandparents can suggest such traditions that have long been forgotten by all. 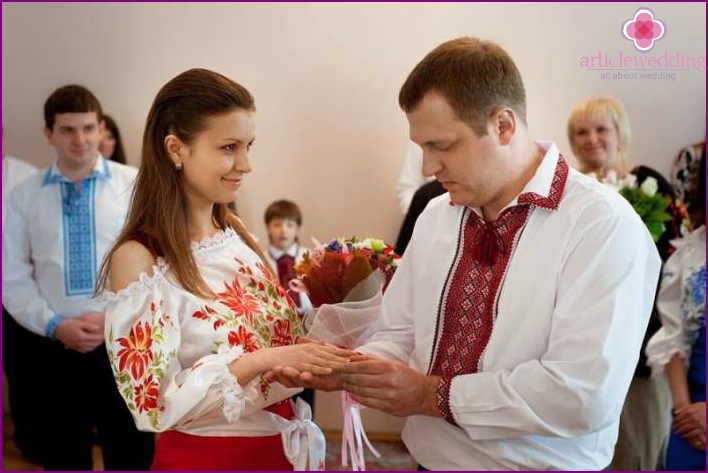 What was the wedding suit of the bride in Russia

The greatest number of cultural monuments about wedding events has existed since the times of Kievan Rus. When Christianity was adopted, lovers began to openly celebrate the creation of a new family, this day was given special significance. So, at this time, folk costumes began to develop, which served as the bride’s wedding dress and groom’s outfit. They always combined the richest fabrics, patterns, folk symbols. 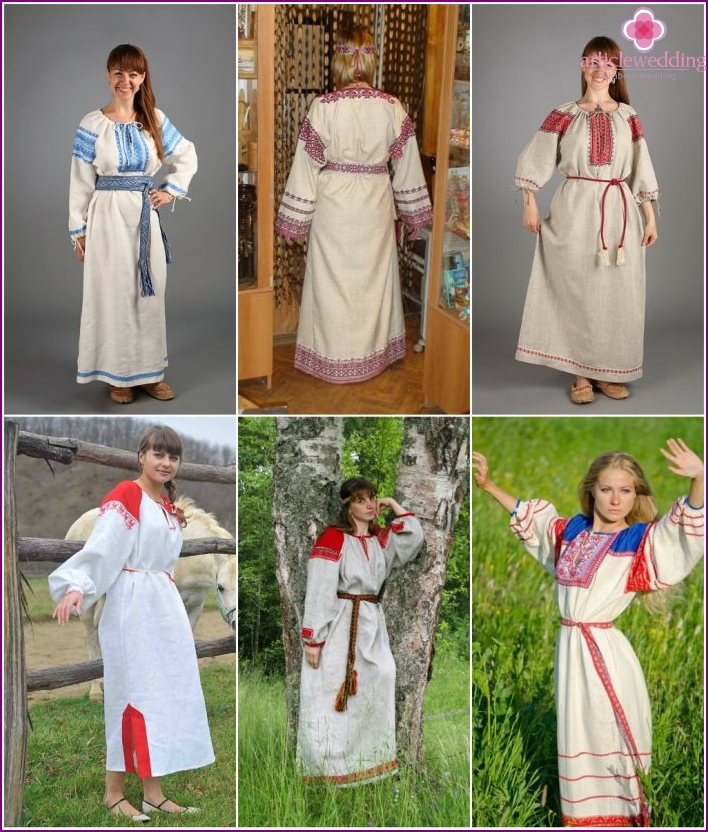 In all wedding folk costumes in Russia, as usual, there was a shirt. She could be long or short, like a modern men's shirt. Only certain parts of this element of clothing peeped out of the sarafan, so this shirt was sometimes called «sleeves». These parts were embroidered with the most beautiful patterns. On the shoulders of such wedding folk shirts were special inserts that were decorated separately. The fundamental difference between an ordinary daily dress and a wedding dress is the wealth of processing the second. They couldn’t even come up with any white dresses.

The shirt was dressed as a wedding dress and was an integral part of the folk outfit. It was sewn from 4 pieces of natural linen fabric (occasionally from 2) and embroidered with silk thread. Often used multidirectional stitches that create an effect «living» ornament. The pattern itself could have a geometric format (sharp corners, endless lines or stripes) or natural (flowers, curls, leaves). This was chosen by the bride herself, as she did all the work.

Now, the Russian folk costume for the wedding must also have an embroidered shirt, but it already has a modified look - any colors are chosen, machine work is possible, not manual. The bride does not need to sit at night over the hoop to be beautiful at the wedding - it’s worth going to the big shops and finding the right option for the wedding shirt. 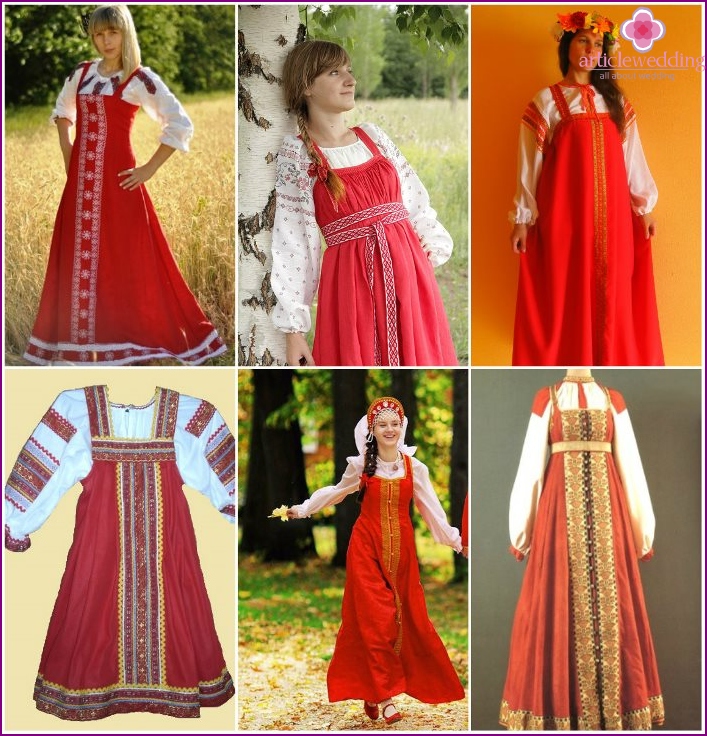 The wedding dress was sleeveless, with narrow or wide straps. At the beginning of the development of ceremonies, the sundress was wedge-shaped - it consisted of several parts, extended to the bottom. And later he began to transform into a direct version of the cut. But in both cases, the waist was not emphasized, the sundress was free and hid all the parameters of the female body. Moreover, the material was so dense that even the shape of a woman was hard to see.

Another thing now - for a wedding celebration, you can wear the most adjacent outfits that slim and open any part of the body. If you choose a folk style, then the format of the sarafan must be preserved, and dressed in the way that was accepted by our grandmothers. Make sure that the ornaments on such a wedding dress correspond to your preferences - each design in the people means something and it is very important that these statements are combined with your worldview. 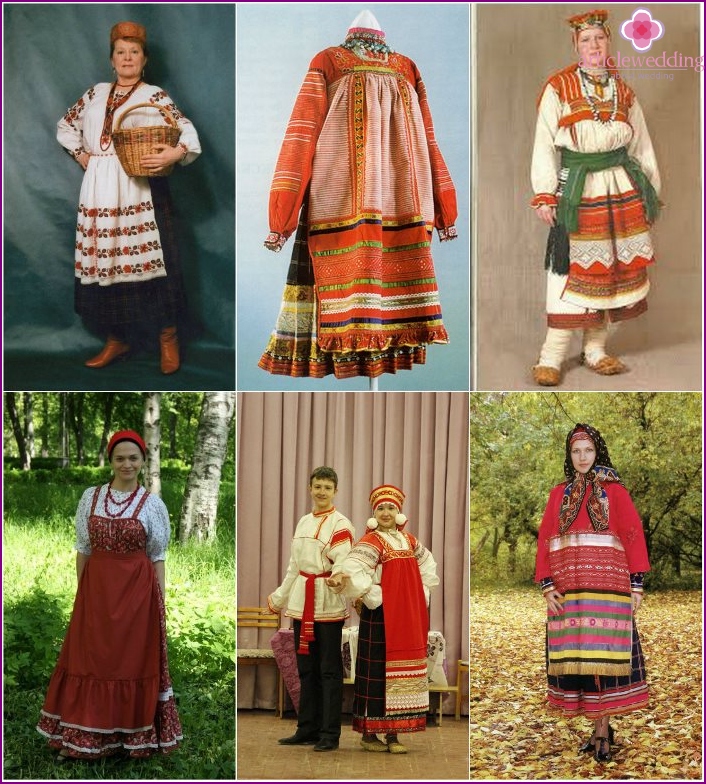 This part of the peasant decoration had a place to be in a wedding dress. The apron in its shape is a bit like a modern apron and its purpose was the same. This item of clothing was also embroidered, but not as thick as a shirt or sundress. He was allowed to be made short with ties behind his back or long - through the neck. Different aprons allowed each newlywed to stand out and be special. Girls showed their economic ability in the ability to make a wedding outfit.

For a modern wedding ceremony, you can prepare an apron, but it is not recommended to be in it at the whole event. There is only one reason for this - such an apron can cover the beauty of the dress itself, as it is worn over it. It is better to use the apron for a certain part of the photo shoot, but not at the time of the wedding or celebration. Please note that many provinces generally had no tradition of wearing aprons with sundresses - which is why it is not mandatory at a wedding.

One or more belts 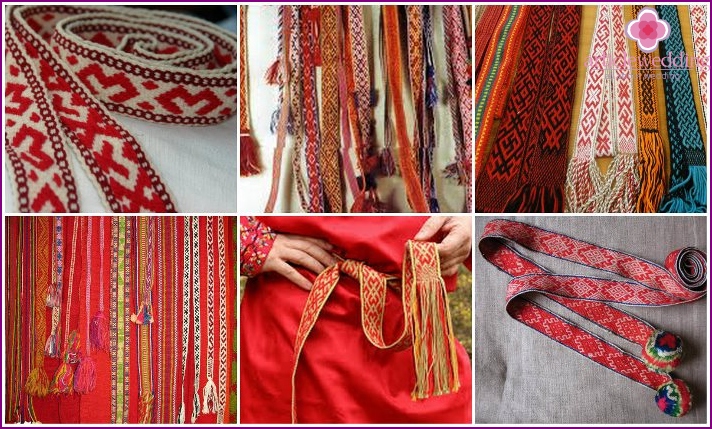 The belt has always been used to emphasize the waist, beautiful female forms. It is also a functional device - it keeps clothes on the figure. At weddings, brides sometimes used such belts. They were embroidered, very dense and could be tied in different ways, since each had a different length. Some newlyweds wore several belts at once in order to stand out and modify the wedding outfit.

There are several ways to tie - with or without a knot, with a bow or with «twisted ends». The bride can wear a belt in different places: under the chest, on the belt. It all depends on which elements of the female body must be emphasized and which ones should be hidden. For thin mills with wide hips, it is better to tie the belt at the waist, and if you want to visually increase the chest, then the belt should be fastened under it. 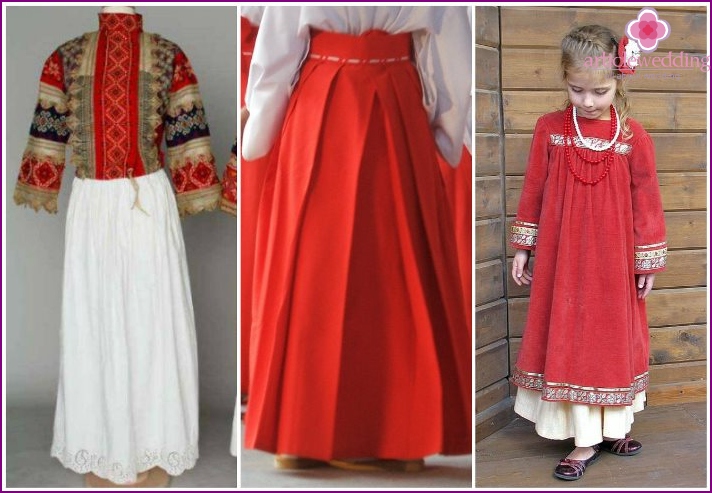 This element of wedding clothes does not perform such a big task, but in ancient times it was very often used. In the lower skirt, the bride could go to bed on her wedding night. The technique of its implementation was the same as for the part of the dress: wedge-shaped or straight cut. At the bottom, such an element of clothing was embroidered with silk threads, and the upper part was sewn on an elastic band without fasteners..

For a modern bride, it is also worth choosing a lower skirt - because it will look 10-15 cm from the bottom of the sundress. Her choice should be based on color preferences, ornament. If the sundress itself is embroidered with a satin stitch, and the bottom of the skirt is a cross, it’s okay, it will look even more impressive, but only with the compatibility of patterns, color schemes. 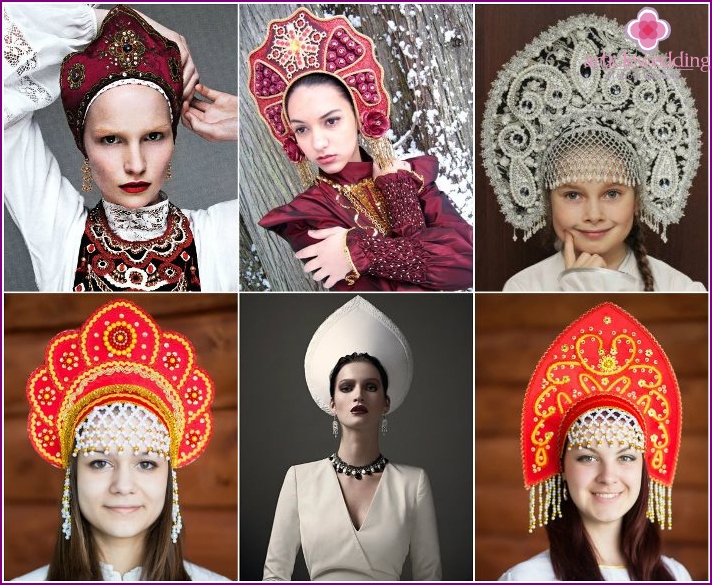 National Russian wedding dress without kokoshnik is impossible. Every bride had this headgear, since an uncovered head was considered a dishonest act. A woman could overshoot only in front of her own husband after long years of life, and for other family members and acquaintances this could not be said. The scarf was a daily item to wear, not a holiday.

The modern bride, choosing a celebration in the Russian folk style, must acquire a beautiful kokoshnik for herself. This is a high semi-hat with an open nape, decorated with different stones, beads, gold, embroidery. Kokoshnik can be worn on a special thin hat that hides hair and protects the head. Choosing this option for the head, you should also think about the veil and hairstyle, since long hair is very clearly visible from under the kokoshnik. A long wedding accessory can be a gentle addition to the wedding look..

If you don’t want to wear a girl’s kokoshnik for a Russian wedding, you should choose a worthy replacement for him. A wreath of flowers - field or greenhouse - will be in place in conjunction with folk dress and ribbons. Since women's dress and kokoshnik are often made in red colors, other accessories can be made in the same format. The main thing in the image is to correctly combine folk elements and modern ones. It will be absurd to look like a folk costume with a bright necklace, it is better to choose not very defiant accessories.

The meaning and symbolism of patterns on ancient Russian costumes

The wedding dress of the bride and groom of the folk style was necessarily embroidered with various reliefs, knitting could be used for this. And each such pattern had its own purpose. Depending on what was depicted on the wedding suit, married life could change. Therefore, in ancient Russia, the kindest, prophetic, correct signs were chosen. Here are some popular interpretations of characters:

The Star or Cross of Svarog means the folding and opening of the Universe. This is grace from God that must be carried through life..
White-God - this symbol brought good luck, light to the family. Such a folk embroidery on a wedding dress means that everyday life will be in joy and happiness.
Bogodar - means that all heavenly Gods will be supportive of the family. And everyone can address to the Higher Forces with any requests and prayers..
Volot was placed on the wedding dress of the groom and meant the strength, power of a person. For the husband to be the head of the family, the mother embroidered such symbols on the shirt.
The tree of Life. The name itself says that such a symbol marks the beginning of a new round. In the modern world, it is embroidered by those newlyweds who are not at the crown for the first time.
Spiritual power - is embroidered in both women and men. The symbol will mean the general power of the family and its resistance to external changes..

Shoes and jewelry of the bride

For feet in Russia, different types of shoes were used. In the summer, sandals were often taken. But in severe frosts, necessarily used folk boots made of wool. This truly Russian type of shoe necessarily went to the dowry of every girl. And now Russians have a special passion for felt boots. Therefore, if you chose the Russian style of wedding, and even in winter - such shoes will be the perfect complement to the look. Otherwise, any beautiful shoes that are similar in color to the outfit can come up..

As for the rest of the jewelry - then there should be a minimum number of them. The format of the Russian folk wedding costume is already very decorated and does not require additional gloss. It is very easy in this case to go too far: bright beads, necklaces, bracelets and rings are more suitable for a classic modern wedding dress, but not for a folk style. Let the embroidered sleeves remain the only moment that attracts the most attention. 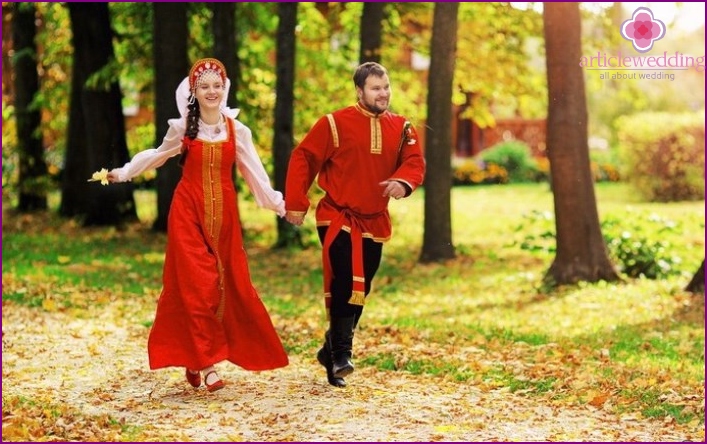 A man at his own wedding was less vivid than his wife. The suit for the groom included trousers and a long-sleeved shirt. The second element could be sewn right up to the waist. And all this was connected by a wide and long belt. This detail was embroidered with the same threads and patterns as a women's wedding outfit. The sleeves and neck of the shirt were also in ornaments, symbolic patterns, this meant the wealth of the future young family.

At the present time, when choosing a folk wedding style as trousers, it is allowed to choose classic black options, but you need to work hard on the top. Since the shirt is the main colorful element, it must be done in the style of the bride’s outfit. It is worth repeating the color scheme, the type of execution of patterns and embroidery. For the base, you can use red color - as the most popular in Russia.

When choosing a style for your own wedding celebration, you need to look at a lot of already implemented ideas (in different photos, videos). Be especially careful when combining the images of the bride and groom, especially if you have chosen a folk theme. We give a selection of the best folk wedding costumes in the Russian style, which can serve as the basis for the future wedding dress. 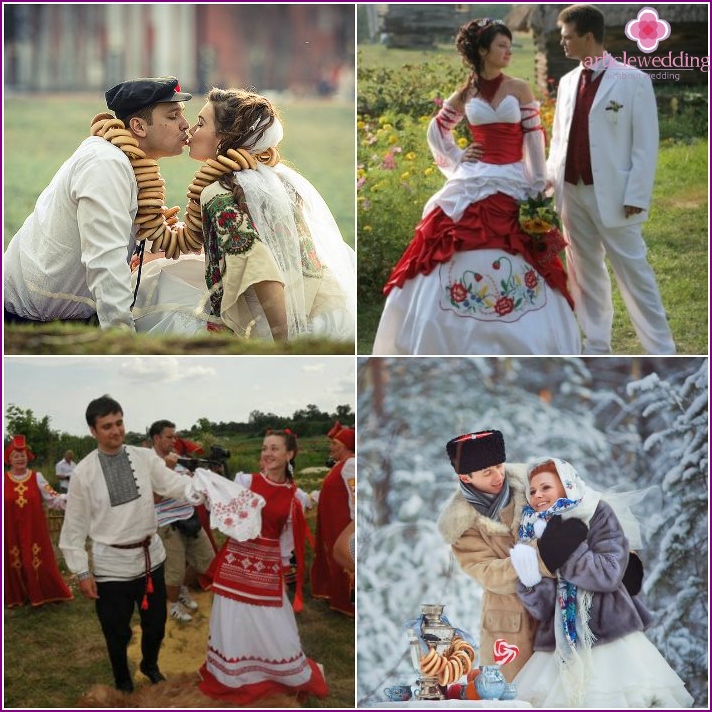 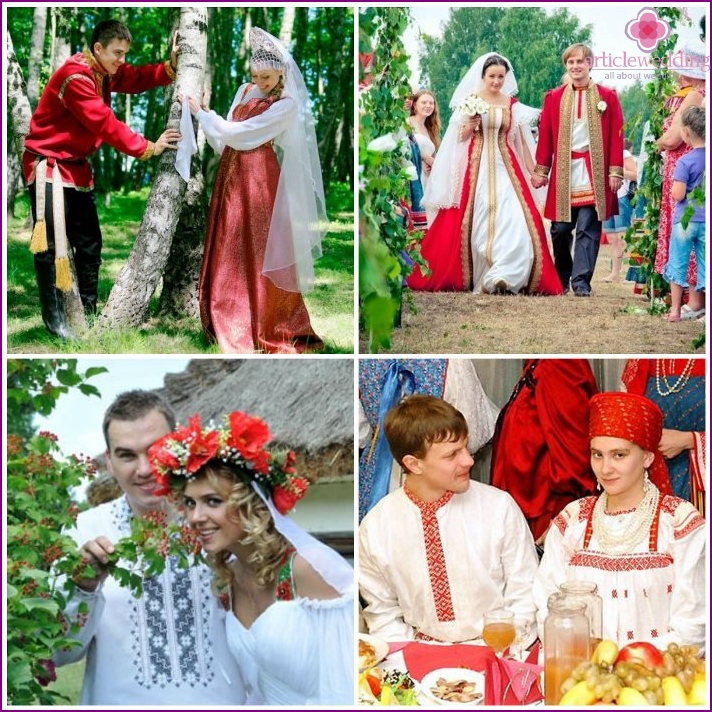