Wedding customs and traditions of the Russian people

There are always couples who want to have a wedding in accordance with the traditions and customs of the Russian people. Someone prefers the most spectacular, well-known rituals, while someone digs deeper and follows the established rules with an understanding of each rite. The traditional wedding of the Russian people is sincere, amazing, interesting, dear. This unique event remains in the guests' memory, and the newlyweds receive an unforgettable farewell to a happy marriage.

What wedding ceremonies are characteristic of the Russian people?

The Russian wedding has long been a complex of customs, rites and traditions, performed in accordance with a strict sequence according to a certain scenario. The most important rituals in Russia were conspiracy, matchmaking, weddings, hen parties, wedding feasts and wedding nights. Each action had an important semantic load. For example, wedding - legal, religious registration of marriage, and wedding night - its physical bond. The wedding feast, according to the traditions and customs of the Russian people, symbolized the public approval of marriage.

Given the customs and traditions of the Russian people, matchmaking was the negotiation of families interested in marriage. This is the obligatory, basic ritual that preceded the wedding. In Russia, it was customary to marry early, because parents were engaged in choosing a bride for their son. The newlyweds themselves might not have known about the upcoming wedding. Before the matchmaking, a family council gathered, at which the closest relatives were present. 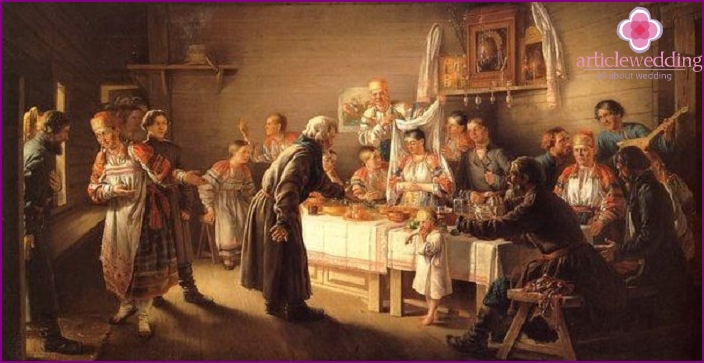 According to the customs and traditions of the Russian people, during the choice of the bride, they did not take into account the financial situation, since it was believed that in marriage the couple herself would gain everything. The matchmakers were chosen with particular care, because the outcome of the ceremony depended on the ability to conduct a conversation, to have people, to represent in a favorable light the parents of the groom. The matchmakers, according to the customs of the Russian people, were the godparents of a guy, close relatives or a person who was respected.

The matchmaking itself took place in compliance with many signs, on which the future life of the newlyweds depended. Girls came to get married. Families of young people established contacts with each other, since family ties at that time were of great importance. For the matchmaking, the so-called light days were chosen: Thursday, Tuesday, Saturday, night or evening with a burning candle. After successful completion, they put a bottle of alcohol on the table, and the matchmakers drank from the glasses in agreement.

This beautiful wedding custom used by the Russian people was intended to give the newlyweds material prosperity. In the modern age, rice is used for rain of plenty, and before they took rye, oats, hops. They strewed him on his head with young people, threw him under his feet, so that throughout their life together they would have a lot of money for a decent life. Rose petals are also used - a sign of love, beauty. 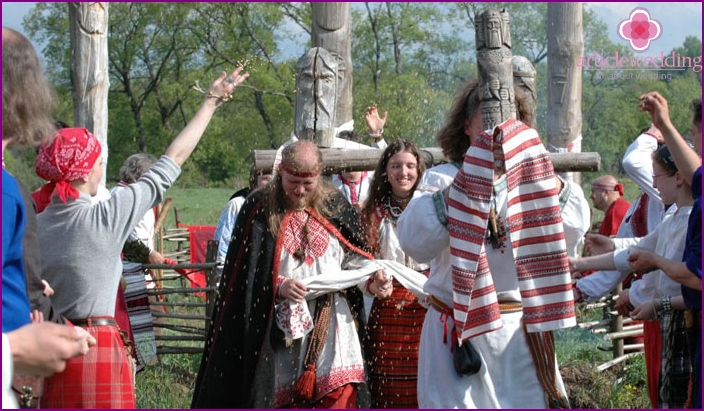 The blessing of the young with the loaf

Another wedding tradition of the Russian people is the blessing of the young loaf, which gave happiness to the future family. Baking was prepared specifically for the ceremony, it was decorated with various patterns. Among the latter, the most important was a sprig of viburnum, personifying love. Loaf pastry gave the wedding celebration a special meaning. To prepare it correctly, it was necessary to take into account many rules and rituals.

The Russian people have a custom, according to which, the dough for a wedding loaf was kneaded by one married woman who has many children and is happy in marriage. So she shared her happiness with the future couple. Before cooking, the woman had to wash her hands, wash, put on a cross, a scarf on her head. While kneading the dough, she prayed. The married man also put the wedding cake in the oven with prayers. The more pastries there were, the more rich and happy life this promised the marriage.

According to the wedding traditions of the Russian people, in order to festively and beautifully meet the bride and groom, the most respected or eldest person gave a speech, and the young parents carried a loaf on a patterned towel, congratulating the newlyweds. The couple took a loaf and bit it off: whose piece turned out to be more, he was considered the head of the future family. Then the child cut the pastries, delivered them to the guests.

In Russia, the pre-wedding ransom of the bride took place in several stages. First, the villagers blocked the way for the groom on the way to his beloved. The second part of the ransom took place near the house of the future wife. The young guy still had to find the bride. According to the traditions of the Russian people, the ransom was originally a performance where the groom and friends played the role of strangers who make their way to the other world for their beloved. The horse was considered to be a wonderful assistant for the young guy, delivering him to the bride's house and taking the couple out.

The Russian people have a custom according to which the squad of the groom had to undergo trials, fulfill the different desires of those who carried out the ransom: cross flimsy bridges, jump over fire to show strength and dexterity. Girlfriends could put forward strange demands, ask for money, make riddles. During the repurchase, the main goal was to request the maximum price, the confrontation between the two parties. The stronger the struggle, the stronger the union of two hearts. After that, the groom could put a ring on a young finger, give a kiss.

Wedding traditions associated with the decoration of the bride

The custom of dressing the bride in a white wedding dress in Russia appeared only in the 19th century, and came into use in the middle of the next century. Until this time, according to Russian traditions, brides wore an old folk costume. Between the noble and peasant wedding attire, the difference was immediately visible. A bride from the nobility dressed in a dress with precious jewelry, sewn from expensive fabrics.

Until the 19th century, a wedding suit was spread in Russia, shimmering in all shades of red. At the wedding, the young lady went in modest, sad clothes, as this symbolized parting with the girl's life. In some regions, girls wore black clothes and veils of the same color. After the bride changed into a red wedding dress, which symbolized the beginning of a new life, joy.

The wedding dress, according to the traditions of the Russian people, consisted of a set of clothes. The wedding sundress was a work of art, as it demonstrated the craftsmanship of the hostess, the material security of the family. Wedding clothes could be passed from one generation to another. Sundresses were embroidered with gold threads, decorated with braid, beads, silver, gold embroidery. A brocade wedding dress was sewn off, wrapped in pearls, expensive furs.

According to the customs of the Russian people, a wedding shirt was considered part of the wedding dress. The sleeves in it could be tapering, lush, long, with slits. They performed a protective function. It was believed that young people should not touch each other with their bare hands during the marriage. Under the wedding sundress hid a huge number of lower skirts, making the figure magnificent, performing the role of underwear.

Head wreath was considered to be a wreath made of wildflowers, symbolizing youth. Later, wedding dresses appeared that interpreted it - hoops, ribbons. The decor of the newlywed's head was made by different jewels. The girl’s hair was braided or left loose. According to the custom of the Russian people, a veil or veil served the bride not only as decoration, but also as a defense against evil spirits and evil spirits. After the wedding, two braids were braided, which wrapped around a young head. Put on a kokoshnik.

During modern weddings, the bride appears with a bouquet, and then throws it to a crowd of unmarried ladies. This tradition, as well as the garter, came to us from the West. Throwing a bouquet symbolizes the transfer of the status of the bride to a friend. That rite is used by the bride to say goodbye to girlhood. The roots of tradition go back to England (18th century). Slavic brides, according to the traditions and customs of the Russian people, decorated their heads with a floral wreath, which they later allowed to try on friends.

A wedding in Russia is not only a general celebration with dancing, drinking, joy, a holiday for everyone, but also a carefully thought-out procedure prescribed by the church, paganism and customs of the Russian people. To organize a real celebration according to all the traditions of our time, we will have to do a great job, but it will turn into a luxurious, fun holiday for guests and honeymooners. The video below will help.