Each nation has its own national traditions and customs. They relate to various spheres of life, especially the rules for the wedding ceremony. The Udmurt wedding is characterized by unique ceremonial actions, the observance of which is mandatory. Many traditions of the celebration of the Udmurts remained in the past, slightly altered, but the basic rules are adhered to today. In addition, the wedding is not only a set of rituals, it has special historical significance for the newlyweds, families and relatives of the newlyweds..

Wedding traditions and customs at the Udmurt wedding

The rich cultural world of Udmurts was reflected in wedding traditions and customs. Particular attention has always been paid to the timing of the celebration. As a rule, marriages are made in the winter, starting from the feast of the Baptism of the Lord to Shrovetide or in the fall from the Intercession and until the beginning of the Philippine Lent. This time was chosen for a reason, because during these periods field work was completed, there is free time for organizing and conducting a wedding.

The wedding of Udmurts, which took place in the fall, was considered the happy end of the business year, and promised a happy, rich family life to newlyweds. Udmurts are strictly forbidden to organize a wedding on certain days of the week - on Wednesdays, Fridays, Sundays, and also in the summer, when everyone should be busy with peasant work. 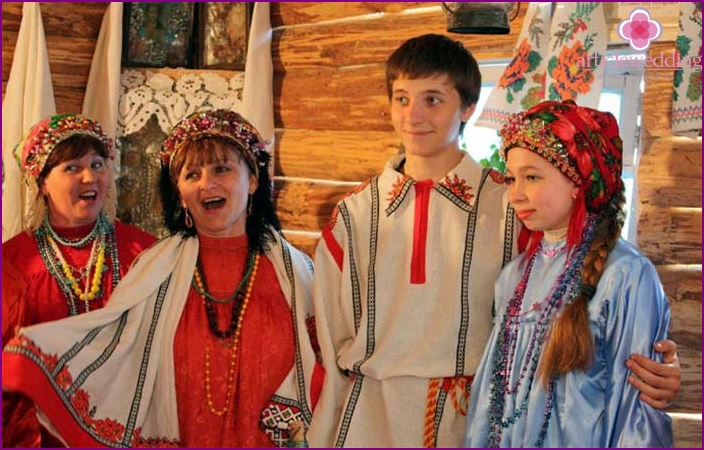 A striking feature of marriage in Udmurts is a large period of time that passes between the stages of marriage. Sometimes this period can last from a couple of weeks to several months. This is due to the complexity of preparing for the different stages of the wedding, of which there are many people. The main stages are considered the following - matchmaking (whined kuran), a holiday in the groom's house (jarashon), a feast at the bride's (xuan), moving the bride to her husband.

For a long time, the issue of the marriage of a Udmurt daughter and the marriage of a son was decided by senior family members. Now the future bride is given a choice - to decide for herself whether to consent to marriage or not. They began to look for a bride for a son or younger brother from the moment when he was 17 years old, his relatives sought to marry him as soon as possible so that another mistress appeared in the house. The parents of the girls wanted to keep their daughter at home longer so that she would help them with the housework, so often the brides were several years older than the grooms.

Relatives of the Udmurts took an active part in the search for a suitable bride, worthy of becoming a wife, mistress. The person who made the recommendations was called demchi and, as a rule, it was a woman. Having looked at a girl who meets all the requirements in the district, the matchmaker found out everything about her family: the nature of the parents, their wealth. The main criteria for choosing a Udmurt bride are her diligence, complaisant nature, good health, love of order. If the relatives of the groom considered this option worthy for their son, then they were preparing for a matchmaking and planning a wedding.

For the rite of matchmaking at the Udmurts, the father (if he was not there, then the mother), demchi, one of the relatives went to the bride's house. It is worth noting that father and mother could not go to a match together. According to tradition, it was necessary to have snuff with him, and if the bride's father liked it, he would give consent to the marriage. Upon arrival, the first conversation began demchi, usually in verse or using allegorical speech. 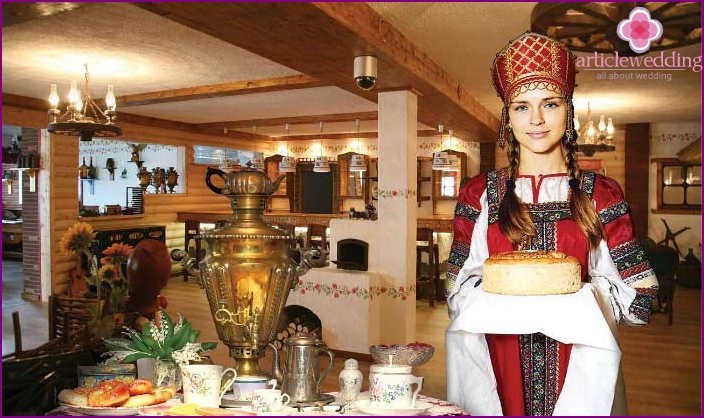 It’s rare when the matchmakers managed to get a positive answer the first time, so when they heard «no», they are «forgot» mittens in the bride’s house, and after a while they returned again with the same offer. If the parents give their consent, the bride puts the samovar on the table and both sides decide on kalym, the time of the wedding, and the dowry. Previously, a Udmurt girl did not have the right to argue with her parents, challenging their decisions, now, the bride can express her opinion and refuse to marry, but few go against the will of her relatives.

After the matchmaking at the Udmurts, an obligatory stage was considered to be a conspiracy, which was attended by the groom, bride, their parents, relatives. Having discussed all the important points about holding feasts, the size of the kalym, the dowry, the girl’s mother took out a loaf and oil, and the groom’s father put a few silver coins in oil - the bride was considered to be wooed. After the conspiracy, the Udmurt bride could stay with her parents or she was taken to the house of her future husband.

Preparing for the wedding

When the basic organizational issues of the wedding are resolved, families begin to prepare for the wedding. First of all, parents, and mainly fathers of future newlyweds, went to relatives, inviting them to visit the celebration. Being invited to the wedding was considered a good sign - it means that the guest is respected. During preparation, relatives of the bride and groom prepared treats, kalym, dowry, the composition and size of which were previously discussed in collusion. 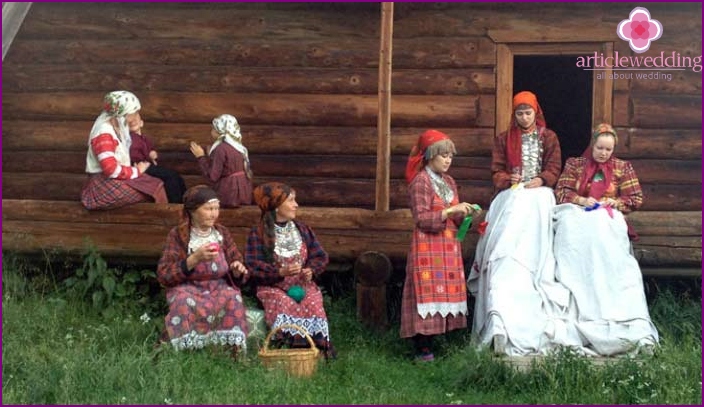 Feast at the bride's house (Xuan)

If after conspiracy the girl remained at home, then «wedding train» went from groom to bride. Relatives who didn’t go to the wedding came to see the guy, they wished good luck and gave instructions. The guests on the groom’s side are called runners, from which the father chose a man and a woman who were appointed senior. Be sure to invite demchi with you to the feast.

In the bride’s house, they carefully prepared for the arrival of the guests to the wedding: they covered the bed with beautiful hand-made blankets, hung decorative towels over the windows, prepared treats, and set the table in advance with cold snacks and baked bakery products. Relatives from the bride came to the house before the arrival of the wedding train and helped treat guests, and did not act as a traveler. 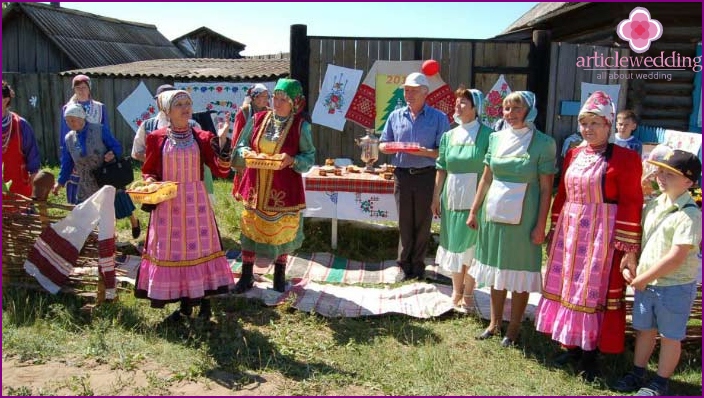 Guests from the groom's side were greeted at the gate, treating them with egg cakes and a drink. Those relatives who did not try the cake were not allowed into the house. When all the guests came in, they introduced the senior manager of the wedding, after which the owners of the house treated the guests. Having tasted the dishes, the wedding songs began, which lasted until the end of the feast. In the songs, the relatives of the groom met the bride. The xuan ended with farewell songs, the bride's gatherings, the presentation of gifts to the xuan participants.

A feast in the groom's house (jarashon)

On the selected day «wedding train» went from the house of the bride to the groom. The rite of Jarashon is slightly different from the Xuan songs, rules of conduct, rituals. Travelers went to the guy’s house, where a feast was waiting for them, after which they traveled to visit the manager, relatives of the spouse. In each house, guests were treated and taught to sing songs. The bride and groom visited the house together with the guests, but they were forbidden to sing.

An unusual tradition at a wedding, relevant in Yarashon, is to demand from the owners of the house a barrel filled with honey or a kumyshka. It was proposed to try the contents with a spoon, after which the tub was sold to someone from the city. On the final day of Yarashon, the guests staged a performance, put on various outfits, clothes, creating the most intricate images. Women often transformed into men and amused everyone present. 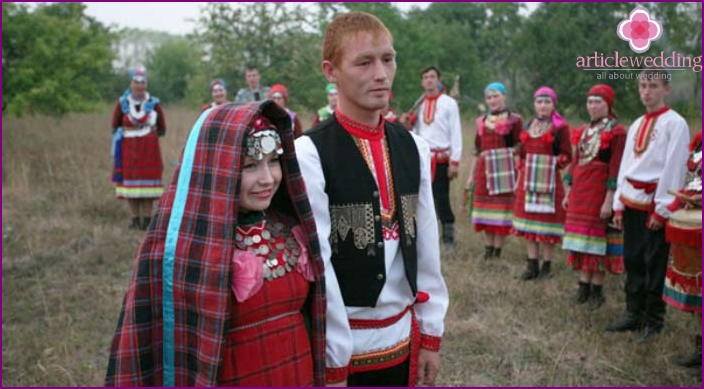 Before leaving, the pedestrians say goodbye to the relatives of the bride and groom, sympathizing with her that she remains in a strange house. The guests are trying to bring the young girl to tears, because it is believed that the more water she spills now, the less sorrows she expects on her further journey in family life. At this feast, the celebration of the wedding ends, but there are still special post-wedding rituals.

Moving to the groom's house

After the end of the xuan, the bride with the dowry goes to the groom, but for the father to open the gate and let the newlyweds go, the groom had to pay a ransom (kalym) for the bride. Relatives met a young girl in the yard and three times circled her around a horse. The mother-in-law escorted the young daughter-in-law to the house and sat on a soft pillow on the female half, unwrapped her braid and braided two that she laid around her head in the form of a hairstyle. She put a special scarf on her head - a turban, which testified to the end of girlhood. After this action, the newlyweds went to bed. The next day, it is customary to consider the bride’s dowry - everything that she brought with her in the chest was hung on a rope in the courtyard. After that, the young wife herself treated the guests, demonstrating her culinary abilities, hospitality, and housekeeping. Then everyone went to the river, the girl threw a silver coin into it, collected full buckets of water and carried them to the house, after which she treated her relatives.

Udmurts pay special attention to rites and traditions after the wedding: 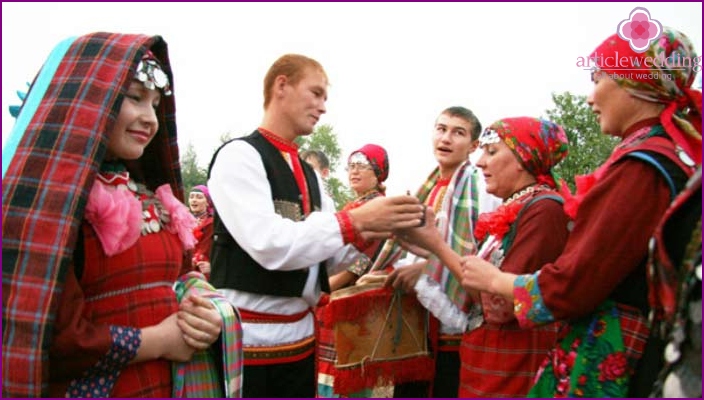 The birth of a new family is always a special holiday, which is surrounded by a variety of rituals, beautiful traditions. The wedding at the Udmurts is held according to old customs, due to which it looks like a beautiful event. For people interested in Udmurt culture or morals of this people, attending a wedding will be a real discovery and will certainly leave a sea of ​​emotions and impressions. If you can’t attend the ceremony, watch the video, so you can see the beauty of the wedding, feel like a guest, and feel the feelings of relatives and newlyweds:

Photo of the Udmurt wedding

It is difficult to convey the whole beauty of the Udmurt wedding with words, it is impossible to describe the charm of their folk songs, the charm of traditional dresses, which are strikingly different from the usual white dresses and black suits. Many ancient traditions have gone into oblivion, but the customs that they adhere to make the marriage ceremony a magical action that penetrates to the core. 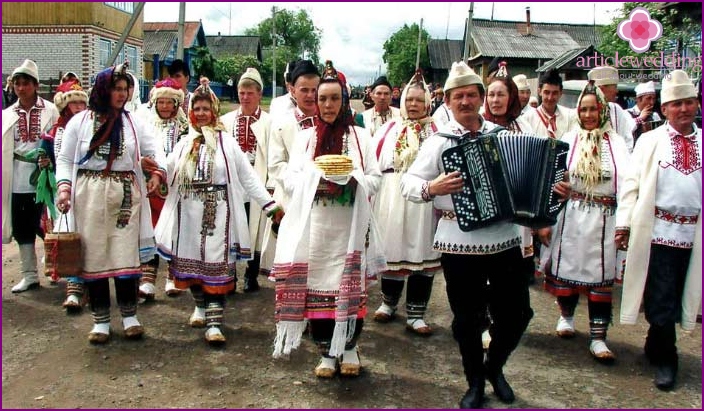 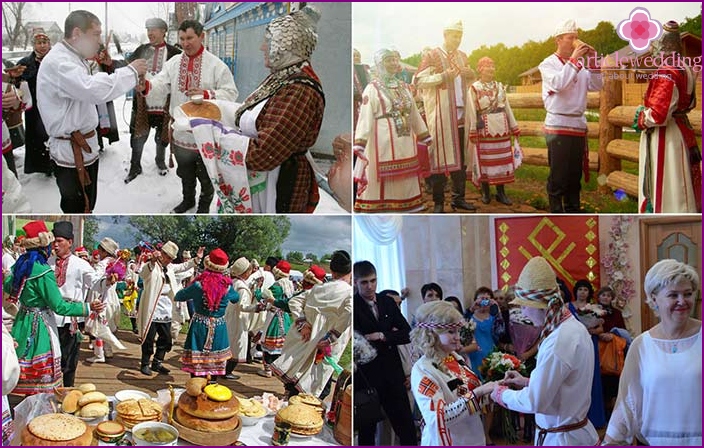