The solemn ceremonies of the Tatar people are original and peculiar. The culture is saturated with a strong national spirit. Modern Tatars are trying to preserve the traditions of their ancestors and revive those that were lost due to various circumstances. The main line of national unity is traced in the preparation and conduct of wedding ceremonies, regardless of the variety of terms

Traditional wedding dresses of the bride and groom

Wedding traditions of any nation take centuries, change, some are lost. The reverent attitude to the choice of a wedding dress remains unchanged. This primarily concerns the clothes of the bride. Modern wedding Tatar dresses are increasingly stylized in a European manner, but with the obligatory bright national color. If earlier the bride's family gave her fabric for sewing an outfit, then a modern girl prefers to choose her own style, material and jewelry for the wedding.

The Tatar bride prefers to buy a finished dress in the salon. In the proposed wide assortment, there will certainly be an outfit for a celebration embroidered with a national pattern of Tatars and coins (salps). Bridal wear implies a closed type of long dress. The color can be snow-white or, according to Tatar traditions, saturated blue, green or burgundy.

Often the color component of a wedding attire is a camisole - a vest of blue, green or burgundy. On the bride’s feet are shoes or graceful light boots - a strainer. The head is covered with a lace coverlet or a wedding national dress - kalfak. The abundance of jewelry - beautiful earrings and numerous bracelets, jewelry that harmoniously fit into the festive attire - speaks of the status of the bride.

Tatar's wedding clothes are outwardly more conservative than that of the bride. Often - this is a strict European-style suit, mostly dark colors. If the wedding is held according to national traditions - the clothes are appropriate. Velvet camisole, mainly dark blue tones, and a headdress embroidered with national patterns using gold threads.

Islamic wedding ceremony in compliance with all customs - nikah - the rite of joining lovers with marriage. It is characteristic of many Muslim peoples, plays the same important role as the wedding for Christians. In order for the nickname to be carried out correctly, four basic conditions must be met, after which the marriage is recognized as valid:

Before the nicknames, the Tatars conduct a ceremony of matchmaking, in which relatives of the groom ask the bride's family for consent to the wedding. If no objection has been received, the conditions of the wedding are negotiated. Often arrange a holiday at the end of autumn, after all agricultural work. On nicknames, the bride and groom prepare gifts for each other. From the groom's side - rich jewelry, as a symbol of his prosperity. The bride gives needlework.

A wedding ceremony is held both at home and in the mosque, as agreed between the parties of the bride and groom. Mullah reads a prayer, makes the corresponding entries in the metric book. After this, the marriage is considered valid. There is an interesting custom conducted by Muslims on nicknames. At the time of marriage, the act of transferring the wedding present from the groom to the bride is recorded. Since this is an expensive gold jewelry, the bride disposes of it at her discretion. In case of financial difficulties, he can sell it and provide himself for some time..

According to customs, after the announcement of the young husband and wife and treats, they arranged a charshau. That was the name of the canopy on the bed woven by the bride herself. A bed of several feather-beds was made by a happy married woman. Often it was the wife of the elder brother of the groom or his mother. If the girl turned out to be dishonest, the groom left a sign on the window of the bathhouse - a punctured coin or cut a canopy over the bed.

Redemption of the bride - how is it different from the Russian tradition?

The issue of kalym is discussed after the matchmaking has passed, and the parents of future newlyweds have come to a common opinion. The ransom of the bride is a large sum of money and jewelry. Sometimes, as a kalym (in the countryside), the groom gives the bride's family livestock. The bride and groom, in turn, will bring bedding, carpets, kitchen utensils to the new house.

According to Russian traditions, the concept of kalym is absent in the bride ransom ceremony. On the wedding day, when the groom arrives to pick up the bride, her girlfriends in a comic form demand a ransom for the beautiful bride and groom. A script invented in advance and funny pranks cheer up everyone. And for those present, the groom shows how well he knows his future wife. The only similarity is that the Russian bride is also preparing a dowry for family life in advance.

Features of the Tatar wedding feast

Traditionally, Tatars hold two weddings. The first takes place in the bride's house. All friends, relatives, neighbors of the girl’s parents and close relatives on the part of the groom convene at her. After this part of the wedding, the bride stays in her parents' house. Next stage - «wedding for women». On the table put sweets, pies, tea. After the ritual, the wedding itself is walked in nikah, then the bride goes to live in the groom's house. And the final stage - «tea from the bride» in the husband’s house, where his close relatives gather.

What dishes are served

Tatar people carefully reveals the secrets of national dishes. The basis of feasts is still made up of meat dishes, shurpa soup, pastries, pilaf. At the wedding table of the Tatars, chuck-chak, butter with honey, bird tongues (purse) must be present. For the wedding, women must bake pancakes, pancakes, prepare a sweet drink of fruit. Meat dishes are represented by dried sausage and traditional goose.

The main place on the festive table is a sweet layer cake - gubadiya. The number of layers must be odd: from three to nine. For the filling, dried berries, raisins or apples are used. Craftswomen are very responsible for baking, carefully checking whether the cake has been baked inside. There is a ritual of ransom of the gubadia, when the groom's father covered the cake with a scarf and put money on top of it. Chuck-chak is another sweet dish baked from unleavened dough, which is bought by the groom's relatives or changed to gifts.

The obligatory ritual dish at the end of the feast is the goose, which is considered a symbol of family happiness. A special person was appointed for cutting the bird, at the end of the holiday he was given a gift. It should be only a man. Cutting should be done very carefully, without damaging the bones. The sequence of actions may vary depending on the geographical location of the wedding..

At a Tatar wedding, alcohol is prohibited by national traditions. For the feast, a variety of non-alcoholic drinks are prepared: kvass, fruit drinks, compotes. The culmination of the Tatar wedding is considered to serve tea with a sweet cake chak-chak - a treat from the bride. During and after nikah, you can not drink alcohol, otherwise the rite loses its strength.

Fun at the Tatar wedding

The Tatar wedding is not limited to a plentiful feast. After the banquet, festive celebrations begin, which can stretch for several days. The traditional musical accompaniment is the sound of harmony. Everyone has fun, including the bride and groom. Numerous guests organize competitions for the best performance of beautiful national Tatar dances. 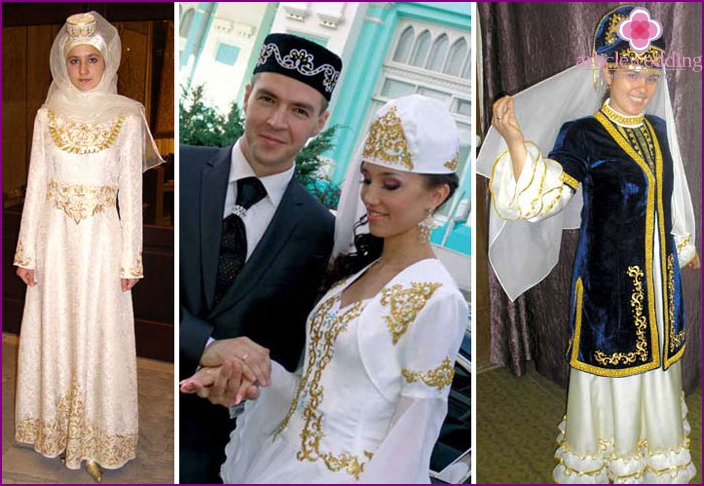 Preservation of national traditions and rites of the Tatar people deserves praise. The ancient roots of the wedding ceremony indicate a respectful attitude to their history. Find out how to properly and in what sequence you need to carry out the ceremony of creating a Tatar family by watching the video below.