Modern weddings in Germany are very similar to European and American. But in this country there are several interesting ancient traditions and rituals that people hold for many centuries. There are a couple of main differences between them, taking into account the region of the wedding. If you want to know how the marriage takes place in Germany, it is worth familiarizing yourself with a few of the most common customs and traditions..

German wedding traditions before the day of marriage

A feature of a wedding in Germany is that traditions and customs are observed already the day before the appointed wedding day. Wedding rituals in many states are very similar to each other, so they often overlap, but this country has its own unique «raisins», which are sometimes funny. They are able to add variety to the traditional vision of a wedding..

The German version of the wedding is amazing and at the same time surprises with its originality, uniqueness. For example, a very original rite in Germany, called polterabend (means «shower wedding») On the eve of the wedding, in the evening, the bride and groom gather with friends and in front of their own house they begin to beat the old dishes that the guests should bring with them.

In Germany, this curious and noisy tradition is a symbol of persecution from a newlywed house of evil spirits. The bride and groom will have to collect together the whole mountain of broken dishes. And friends will sprinkle them with lentils or peas. This German tradition personifies the fertility, health and happiness of a young family. To make the pre-holiday evening fun and remember for a lifetime, you need to invite a lot of friends.

For this event in Germany, it is customary to prepare drinks and food (it cannot be one dish, a chic table should be set). This tradition allows you to invite those who do not come to the wedding. For example, lovers would be glad to see neighbors at their wedding, but the budget does not allow it. This festive evening is allowed to beat not only china, but also other breaking clay or ceramic objects, which is part of an old tradition. Guests can even bring a toilet, but you cannot hit a mirror. 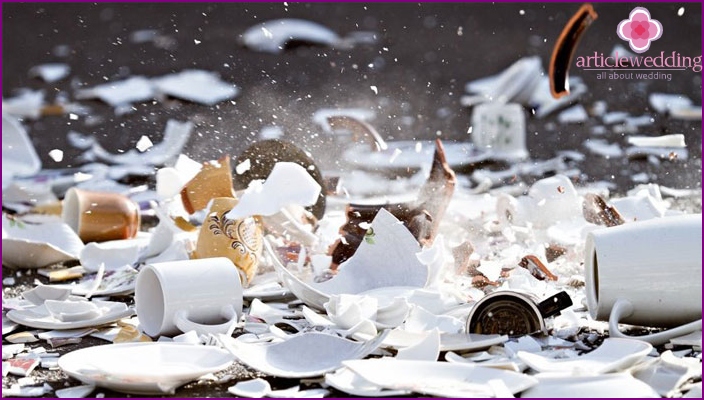 Another wedding tradition in Germany is amazing. During pre-holiday shopping trips, when the bride makes the final choice of wedding shoes, she should pay for it only with coins. Each girl begins to collect them from early childhood. This old tradition is a symbol of frugality, frugality of the future wife, and means that very soon she will become a good housewife, who will be very attentive to the family budget. This rite was called Hochzeitsschuhe, which means «Wedding shoes».

Customs and traditions observed on the day of the celebration

The wedding in Germany begins with a civil ceremony in the registry office, to which relatives and close friends are invited. Then a religious wedding is held in the church. It is better if the wedding is held before noon, because this time in Germany is considered ideal for creating a new family. Previously, if it was not possible to conclude a marriage before this time, on the church clock the hands were turned exactly an hour ago.

The groom takes the bride from her parents' house. They go to church on a beautiful traditional horse-drawn carriage. All the way, the girl should not look back. It is believed that this will promise her a second marriage. Following the young, a long motorcade sets off with guests and relatives. During the traditional wedding, the lovers stand huddled together, and upon entering the church, they move slowly to the altar.

The way of the bride and groom is strewn with flower petals. This old German tradition predicts that aromas will attract the goddess of fertility to the newlyweds, which will give children in love. A special wreath decorated with beads and precious stones is put on the bride, he will not be removed until night. If the girl is getting married for the first time, the wedding bouquet should be from myrtle. Throughout the ceremony, the bride and groom hold candles, which are used to decorate a satin ribbon, a living flower. Young does not let the bouquet out of her hands.

On the wedding day, the newlyweds must plant a rose bush - this tradition is widespread in Germany. It is very curious that in the city of Leising, the authorities obliged each groom to plant at least 6 trees before his wedding day. If the young one ignores the law and does not obey, the girl is forbidden to marry him, and the wedding is postponed until this condition is met. No wonder Leasing is still called «blooming city».

After the wedding ceremony, as soon as the bride and groom left the church, the guests in front of them lay a heavy log on the sawtooth. Lovers are given a rusty old saw. Standing against each other, they begin to saw. This original tradition suggests that the newly-married wife and husband in marriage will work together and can solve all problems in family life together.. 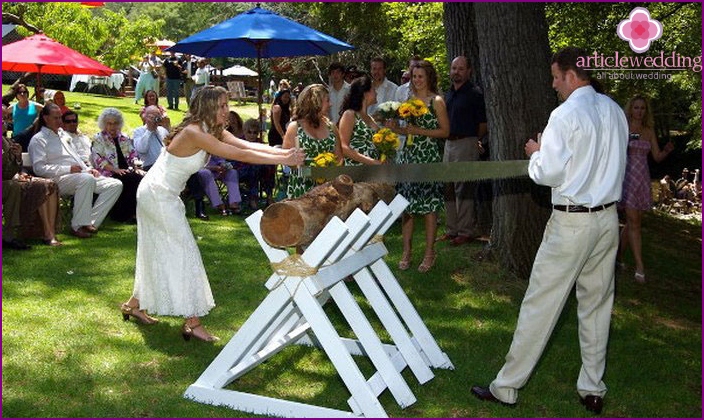 As soon as the young family copes with this task, real wedding fun begins with skating around the city. At the same time, all cars start and go to the place where the festive banquet will be held. Each car that is part of the wedding procession is decorated with a ribbon that has a white color, and it is attached to the antenna of the car. During the movement of the car, they constantly beep, without stopping even for a second.

At the height of the wedding, the bride kidnaps the bride and hides her in some beer bar, which should be located near the venue of the banquet. The groom’s main task is to find his beloved, and the sooner he passes this test, the better. Having found his wife, the young will have to pay everything that the bride had had time to drink by that time, and pay the bill for the kidnapper. This ancient German tradition has been respected for a long time..

Almost every German wedding observes such an old tradition - guests are given notes - «forfeits». This short message will indicate what subject each invited person will have to send to the newlyweds every day, but only after the wedding. For example, it can be a pack of favorite bride’s tea, pasta packaging for the groom, chocolate. Thanks to this wedding tradition, German newlyweds will receive a new package every day during their honeymoon. Parents can write young parents or they themselves. This is done before the wedding..

Sprinkling guests with grain and salt

There is another old tradition at a wedding in Germany - the bride generously sprinkles salt and grain on guests at the festival. To this end, her dress undergoes small changes, special secret pockets are made, which contain the necessary components for the upcoming action. The Germans associate this tradition with a call for a young family of abundance, wealth.

There is another funny tradition - before the wedding, a place where the bride and groom will spend their first wedding night, is visited by their relatives and friends who leave there some kind of unusual surprise joke. For example, it can be a sheet with spicy inscriptions or drawings, a toy is put in the nightstand «for adults», the room is filled with a huge number of balloons, which the newlyweds will have to throw out the window or pop. Someone decides to take a lot of alarms, start them in the early morning, and then hide in different places in the bedroom. 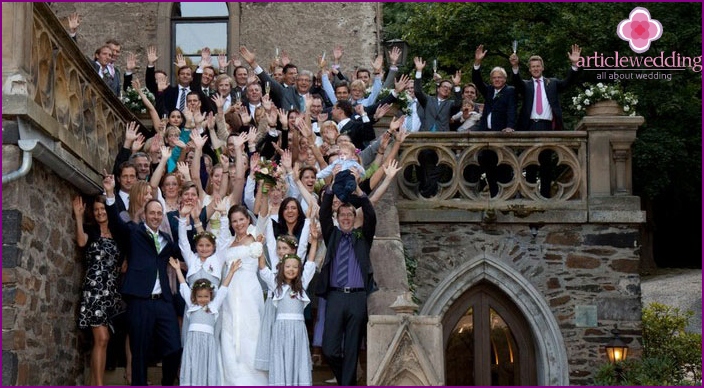 The wedding dress of the bride in Germany does not have any strong differences from European dresses. But the wreath with a bouquet for the bride and groom should consist only of white flowers, a small twig of myrtle, which is a symbol of heavenly blessing and longevity, is necessarily woven into them. This plant is often added to young flowers. After the wedding, the bride’s wreath and bouquet should be stored in the house as a heirloom. The groom can wear a dark or light suit. 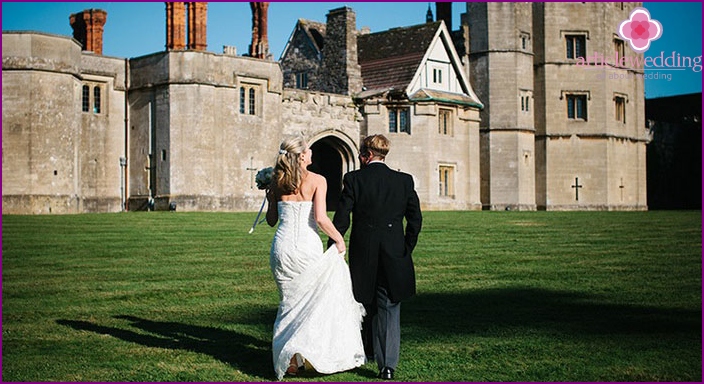 The funniest tradition of a German wedding is the joint cutting of logs by young people. This ritual has been observed for many years and is a symbol of the fact that the newly made husband and wife will be able to solve all problems together. If you want to know how such an ancient rite is held, you should familiarize yourself with the following video: