Islam has many adherents, but in different countries this religion has its own characteristics. Not many Muslim nations adhere to the strictest Sharia law - a mixture of cultures has greatly changed the classical laws of the Islamic religion. However, eternal values ​​remain unchanged, so the wedding ceremony of the East for many centuries retains the basic laws. In Islam, it is believed: as long as the tradition of a Muslim wedding is respected, so young will be happy. Marriage in Muslim countries is carried out with special abundance and splendor.

A Muslim man cannot seek a wife for himself, this is what the women of his family are doing - his mother or older sister. The future spouse describes in detail the desired qualities of her chosen one:

Muslims appreciate the luxurious form of a woman, so grooms are allowed under the robes of a girl to see the ankle and evaluate its thickness. If you like the result, then they continue to test the candidate further. The thin or thin ankle, which is so valued in the West, according to Muslim traditions indicates the applicant’s poverty, minimizing the chance of getting married.

When the bride is found, the period of courtship and preparation for the wedding begins. Young people are introduced to the girl’s parents’ house, where a man comes with his family, and gives his future wife expensive gifts. At the first date, the young people are allowed a short conversation and an exchange of views - no more. Then there is a pause in communication when the girl’s family evaluates the applicant for the daughter’s hand. In a week, the bride's side should give an answer. If the groom's courtship for some reason was unsuccessful, then his gifts are returned. 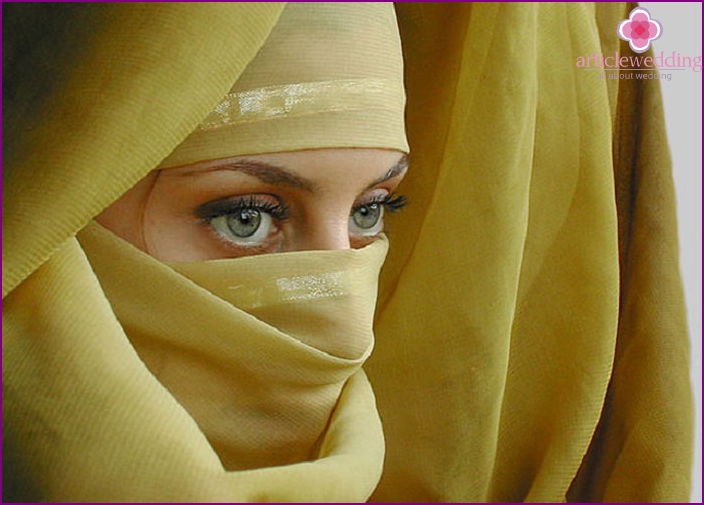 The most beautiful Muslim wedding tradition is the night on the eve of the wedding. The groom is applied a henna pattern in the palm of his hand, and the bride in the palm and foot in the form of floral ornaments, so the rite is called «Henna Night». The groom leaves before the wedding to have fun with friends, and the future wife is dressed up in a beautiful Muslim dress with expensive embroidery, covering her face with a veil. The groom’s mother lays a carpet under the girl’s feet, which she presents as a gift, and invited friends shower her with coins, wishing for the continuation of the family and family well-being.

Hand and foot painting with henna (mehendi) has its own language. These traditions have been known since ancient Babylon, and trust the painting of a woman who is happy in marriage. The elm of the wedding pattern must necessarily hide the initials of the groom, which he will find on the first wedding night. This is a peculiar method of recognizing the bride, because young people could not see each other before the wedding. Henna is chosen high-quality, because the longer it is held in the hands of a girl, the longer the newlywed is freed from any housework. 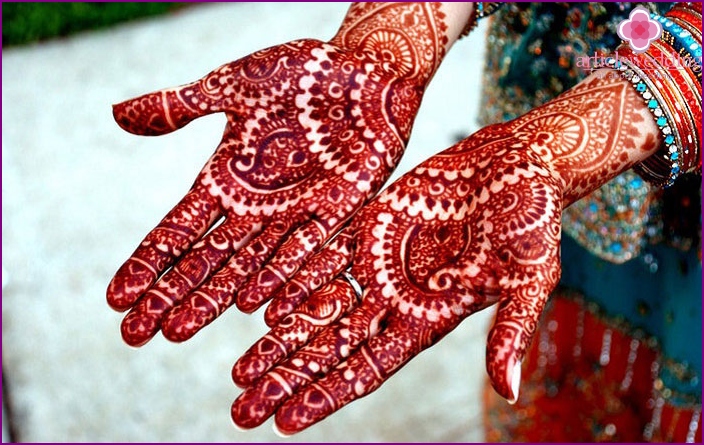 According to the Muslim wedding tradition, the rite «Nikah» provides for four conditions:

Violation of any condition becomes the reason for divorce. A wedding ceremony in the east is usually held in a mosque, where a mullah reads surahs from the Koran to newlyweds, which provide instructions for family life. Lasts «Nikah» about an hour during which those present listen to the mullah and read prayers. During the ceremony, the groom presents valuable gifts to his beloved, a list of which is on the mullah’s list and is indicated on the marriage certificate. According to Muslim tradition, Nikah ends with an exchange of silver rings. 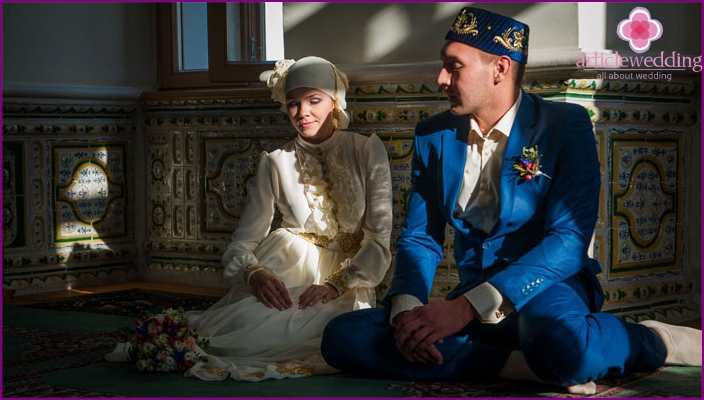 The traditional wedding table setting is called among Muslims «Valim». This rite has a religious meaning: you can’t eat foods prohibited by the Koran and drink alcoholic beverages. Muslim wedding table falls from an abundance of vegetables, fruits and sweets. A wedding feast never lasts long, and does not turn into an endless booze. Relatives, friends of the newlyweds are invited to the table, but people of other faiths are not allowed to attend a Muslim feast at a wedding. 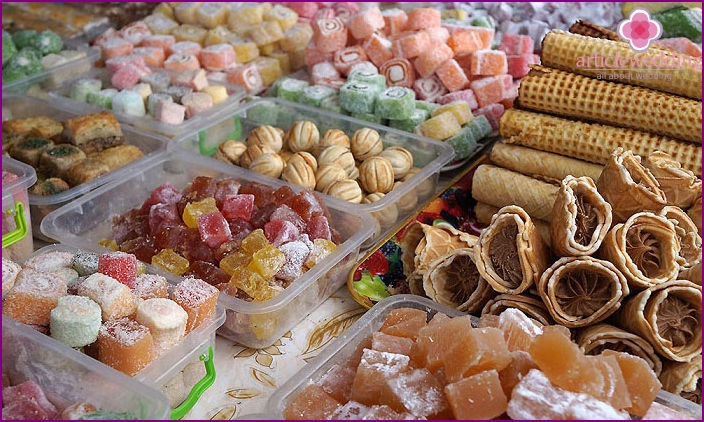 Traditional wedding dresses of the bride and groom

Outfits of the newlyweds are of great importance at the Muslim wedding ceremony. They must be in line with tradition. A man should be in a skullcap and long dressing gown (galabee), expensively embroidered with gold or silver threads. Unlike women's dresses, Muslim man’s wedding clothing should not be silk or accentuate body relief.

A wedding dress for the bride is sewn using expensive and bright fabrics of different colors: satin or natural silk. It is important that the fabric does not shine through. A prerequisite for the bride's outfit is a long sleeve covering her arms, and a high collar should cover her chest and shoulders. A beautiful Muslim woman will never wear a tight or open dress for a wedding, because according to the Qur'an, a woman should not flaunt her beauty. 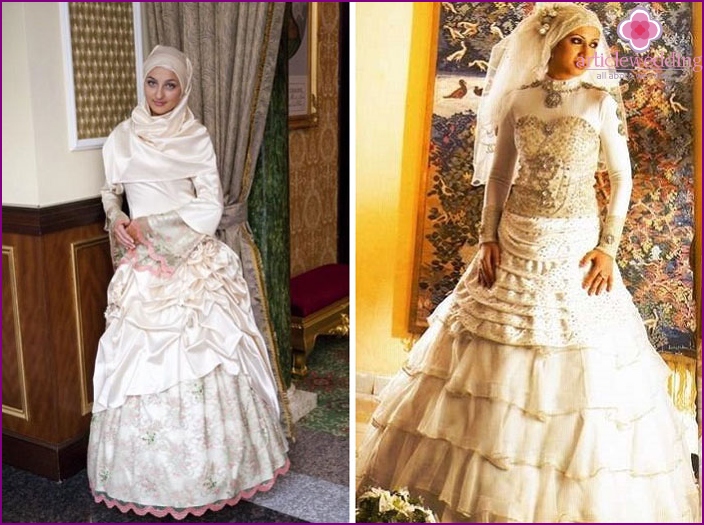 Video: wedding ceremony in a mosque

Creating a new family is one of the most important Muslim holidays. By tradition, this is not only a responsible event, but also worship of Allah, therefore, the ritual must be approached very responsibly. Modern newlyweds before imprisonment «Nikaha» you should contact the imam and learn about all the traditions that accompany the ancient wedding rite.

According to the traditions of Islam - in any union, legal norms, duties should be strictly observed, and the wedding union between a man and a woman is no exception. After the Islamic wedding, the imam advises the newlyweds to hold «al-Valima», to treat guests, publicly announce their marriage. How to conduct a Muslim marriage ceremony, let's see in the video: