A large number of different nationalities live in the mountain Caucasus: Ossetians, Chechens, Azerbaijanis, Dagestanis, Armenians, Abkhazians, etc. All this national diversity has formed a unique culture consisting of various traditions, customs and rites. The day of marriage plays a huge role in the life of a Caucasian person. Caucasian weddings are large-scale events that are celebrated for at least three days: they have fun dances, loud music, a generous feast, ancient customs.

Features of traditions at Caucasian weddings

There are some distinguishing features of the traditions of Caucasian weddings that distinguish them from other nationalities. 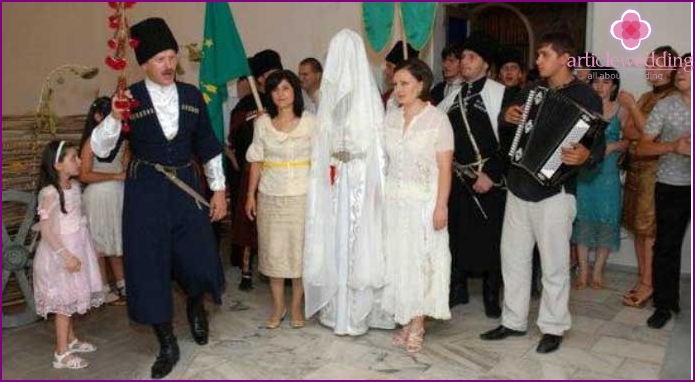 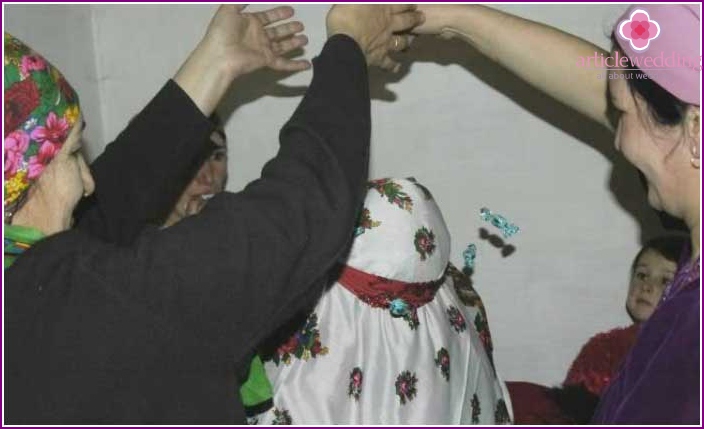 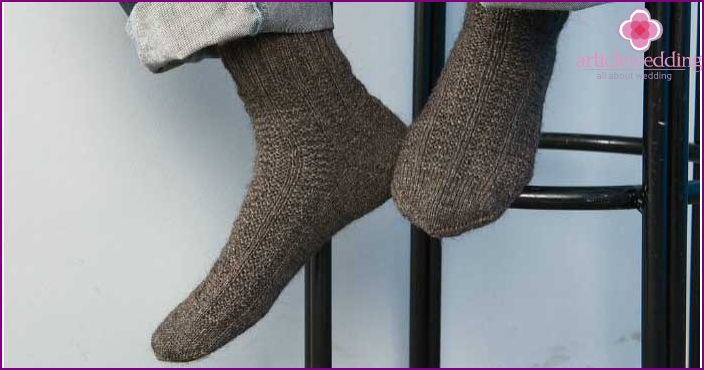 In big cities, many traditions of the Caucasian celebrations have changed, new interesting details have appeared. For example, if earlier girls and men celebrated the wedding separately, now everything has become different: the young female half is not only present during the Caucasian celebration, but also has a chance to find a lover. Girls are seriously preparing for the wedding of their girlfriend - they embroider handkerchiefs, dresses, and men prepare ingenious phrases to win the heart of a lady they like.

After the young people exchanged pleasantries, as a sign of his sympathy, the young man gives the girl who has looked at the treats a treat, but not himself, but through an intermediary. If sympathy is mutual, through the same intermediary she transfers a handkerchief embroidered with her own hand. Gift exchange meant the beginning of their acquaintance and its possible continuation.

Matchmaking in the Caucasus

Before the matchmaking, the bride passed a choice. Previously, the bridegroom's parents chose the young girl, this could happen long before the wedding day was appointed, because often the future spouses were married, while they were still children - from the age of 12 years. An important role was played by the well-being of parents, their position in society, and the health of their daughter. Now young Caucasian men can choose their own bride, although they still symbolically ask for parental permission, and only then send matchmakers. 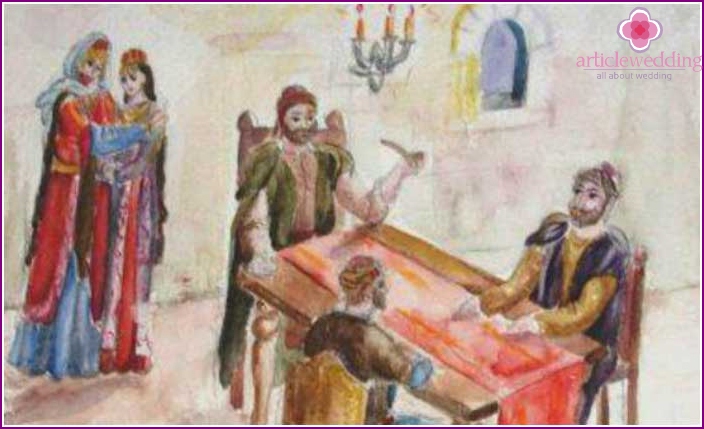 At the first arrival of the matchmakers, it is customary to disagree. The head of the family says: «We need to think, talk with the next of kin, ask our daughter for an opinion. Soon we will give an answer». 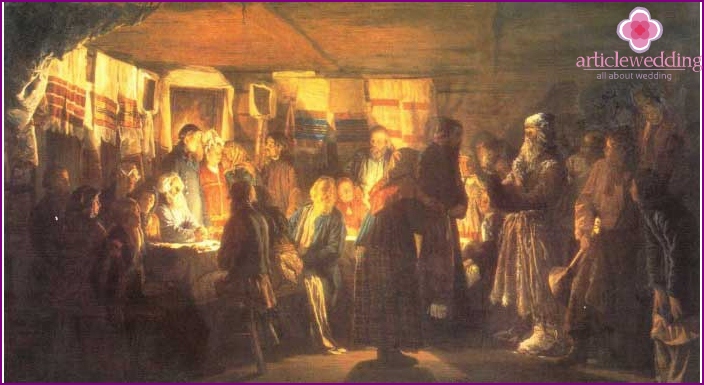 The ritual of matchmaking may differ depending on the cultural characteristics of a particular nationality of people living in the Caucasus. Traditionally, the date of the upcoming wedding was set by the parents, then it fell on the shoulders of the future spouse and is still preserved, although now the opinion of the Caucasian bride is always taken into account and respected. Previously, the matchmaking took place in the spring, and the wedding was played in the fall after harvest, but this custom is a thing of the past, giving way to warm summer weddings..

Also, after the matchmaking, questions are solved about the number of guests, the costs of the upcoming celebration (the groom takes the monetary side). Usually, a huge number of guests come to the Caucasian festivities - relatives, even the most distant ones, friends, pals. If future spouses forget to invite one, he has every right to be seriously offended. Sometimes you can meet strangers there, they will be welcomed if they make a worthy gift to the culprits of the Caucasian celebration.

There are such cases that the matchmaking fails, the bride refuses the young man. Then he can decide on a tricky act, having committed the theft of a Caucasian bride. Together with friends, a man steals a girl, brings her home, in every possible way persuading her to stay, promising gifts and a comfortable life. Even if a girl does not want to be his wife, she has no choice but to agree: the honor of the bride is considered tarnished if she spent the night in the man’s house.

The custom of celebrating 2 weddings

Celebrating weddings in the Caucasus, as a rule, lasts from two days or more. Previously, two celebrations took place simultaneously - one in the house of the future spouse, where men gathered on both sides, the other in the house of the bride, where women came. This allowed everyone to feel comfortable, and the female half could have fun without serious supervision of men.

Now women have received more freedom in relation to men, the holiday can be held together, but according to tradition, the culprits of the occasion are not accepted to be present during the event, so there is a tradition of holding two Caucasian weddings: the first symbolizes a kind of farewell of parents to their beloved daughter, it takes place in a week to the main celebration. Relatives of a suitor are gathering, the groom and the bride come, a fun walk.

Then, a week later, on the day of the official marriage, relatives of the hero of the occasion walk. Parents are paid kalyma to their parents, girlfriends transport her dowry, decorate the house, the girl moves to her spouse. Due to this separation, the heroes of the occasion celebrate both weddings, however now, in order to save money, there is often a joint Caucasian celebration, where relatives come from both sides.

Caucasian bride - an image of chastity and modesty

In the Caucasus there is a cult of respect for women, but women must behave accordingly. The Caucasian bride is an example of beauty, modesty, innocence. A girl who marries according to the traditions of the highlanders should behave quietly during the celebration, hardly speak, drink and eat a little, her face is often covered with white cloth. Unlike the European wedding, where the bride takes an active part in the celebration, the culprit is rather a wonderful wedding decoration.

Another interesting feature of the Caucasian celebration, unusual for Russian people - during the celebration it is not customary to scream «Bitterly!» In addition, the kiss in public does not correspond to the image of the Caucasian bride, and the youngest person should not touch her lover until the wedding night. Also during the event, jokes or liberties in relation to the Caucasian hero of the occasion are unacceptable.

A wedding in the Caucasus, as a rule, is often accompanied by cheerful, energetic live music, guests eat, sing, dance national dances, the main of which is Lezghinka. This is a quick dance of the Caucasian people, which is necessary at least once, but the guest of the celebration will dance - a man acts as an eagle, a woman as a swan. The bride also has the right to dance, but only after the invitation of the elder relative.

Watch a beautiful video where they dance a unique Caucasian folk dance - lezginka:

Caucasian toasts for a wedding

During the Caucasian celebration, it is customary to say many toasts with wishes to the young spouses. They often represent parables, instructions, metaphorical statements. When addressing a toast to the groom, one must first praise his courage, perseverance, strength. Praising the bride, they focus on her modesty, thriftiness, beauty, humility. At a wedding celebration, guests behave loudly, according to legend it will bring more happiness to the newlyweds.

Festive motorcade of the newlyweds

The wedding procession of the newlyweds can number from 20 cars. Drivers behave loudly - honking to notify everyone about a large-scale joyous event. The first car carries a banker: the driver pays the ransom money for the fare to everyone who stops him, even to a casual passerby. The culprits of the Caucasian celebration are driving in the second car. The third is carrying carpets that will spread in front of the bride so that she does not step on the asphalt.

A wedding in the Caucasus is a magnificent and significant event that will not leave anyone indifferent. Friendly participants in the celebration, a beautiful bridegroom, a modest bride, clockwork dances, songs and toasts - all these are mandatory parts of a magnificent ceremony, which for a long time will remind you of amazing photos and videos.