Home › Wedding preparations › Traditions › Theft of the bride at the wedding

Theft of the bride at the wedding

Stealing a bride at a wedding is an interesting tradition that dates back to antiquity. The ancient Slavs took the girls during games or holiday festivities into the forest. This was considered the main wedding ceremony: the girl, whom the young man took away under a pre-planned agreement, began to lead a life together with him and became a wife. At modern weddings, bride theft is a fascinating sight.

How to organize a bride theft at a wedding?

One of the most fun traditions is the theft of the bride at a wedding or shoes. No triumph is complete without this rite, because the guests will not calm down until it is held. It is important that the funny rally does not become the headache of the groom, the host and the witness, crossing the verge of reason. So that the theft of the bride at the wedding does not cause trouble and problems, follow the advice of professional leaders. 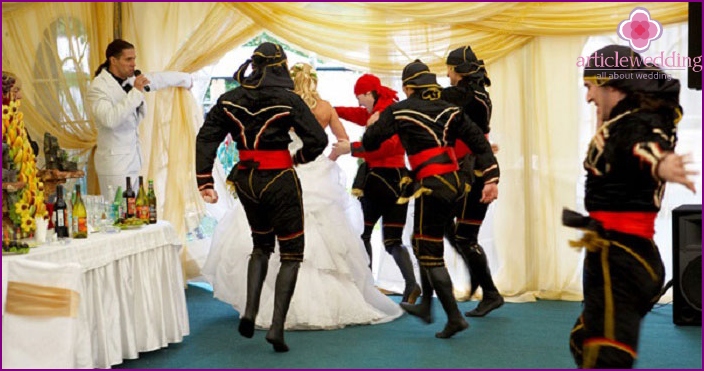 The theft plan should be discussed with the host in advance so that there are no misunderstandings. Too far to hide the young is not worth it, otherwise the guests who stole her will begin to search. It is worth remembering that pantries, basements, cabinets, attics and kitchens are not suitable as a place where the newlywed is allowed to hide. The remnants of food, cobwebs, dirt will not benefit the girl and her along.

It is better to organize the theft of a young girl when no one is waiting for this. Pick up a place in advance where you will hide it. Abductors should carefully consider everything, including the ransom they receive from the groom. It is worth considering recreational activities for guests, while the groom will look for a sweetheart. At this point, the host can entertain guests invited to competitions.

In modern Russia, kidnapping a bride at a wedding is considered a fun tradition, a fascinating rite, part of a fun holiday program. If this rite is not thought out in advance, it becomes the cause of the spoiled mood of the newlyweds, a source of conflict among the guests. To avoid such a nuisance, you should use ready-made scenarios for the abduction of the newlywed.

Theft of the bride by gypsies

The theft of a beloved groom by gypsies at a wedding is a vivid sight. This nationality is associated with fun songs, colorful outfits, as well as a talent to steal everything that is bad. To distract the groom's vigilance, you need to ask for the help of several guests. To organize the abduction, you will need tambourines, bright scarves, gypsy costumes, a guitar.

First, girls with songs should enter the room, surround the groom, wave skirts, shawls in front of him, not allowing them to leave the vicious circle and see what is happening from the outside. Meanwhile, two gypsies are taking the bride and groom away. When the groom rushes and finds out, it will be time to demand a ransom, because the gypsies don’t return anything for free.

As a ransom, the groom must pay with fake money, sing, dance, play the guitar, complete a comic task. After receiving a reward, the gypsies are ready to give their beloved. However, the scenario includes a gypsy. It is advisable that this be a man dressed as a woman. It is unlikely that the groom will be satisfied with such a substitution of the beautiful wife, so he will have to pay again. After the return of the real wife, the gypsies arrange fortune telling on the palm of their hand or on cards, sharing marital responsibilities between the couple.

According to the movie “Caucasian captive”

Easy to organize bride theft based on scenes of famous movie “Caucasian captive”. Costumes for experienced thieves, Coward and Dunce. You need a sleeping bag full of something voluminous. Disguised men take the bride away from the banquet, return and demand, as ransom from the groom, the performance of thematic toasts or songs. After this, thieves try to slip a sleeping bag without a bride to the groom. The husband, revealing the deception, again demands to return his wife. And after that they return him young. 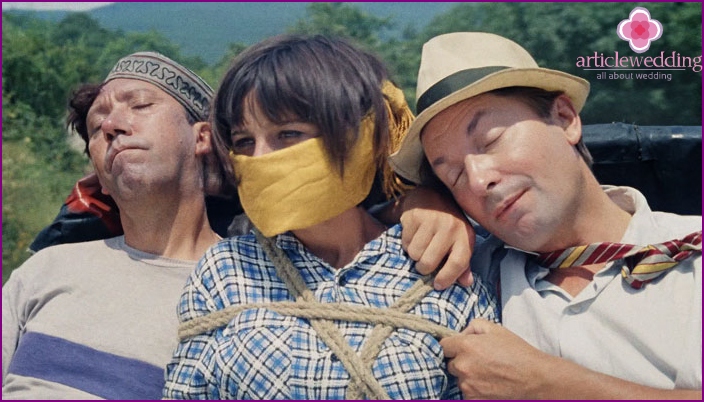 Such a scenario involves the capture of a banquet hall by people dressed in military uniform with toy weapons in their hands. It will be especially interesting to participate in such an action for young people who are fond of paramilitary games, for example, paintball, and can rent weapons and uniforms for one evening. In this case, it is not necessary to take the bride to a separate room, just surround her in front of all the guests. The kidnappers will demand a monetary reward for the bride. 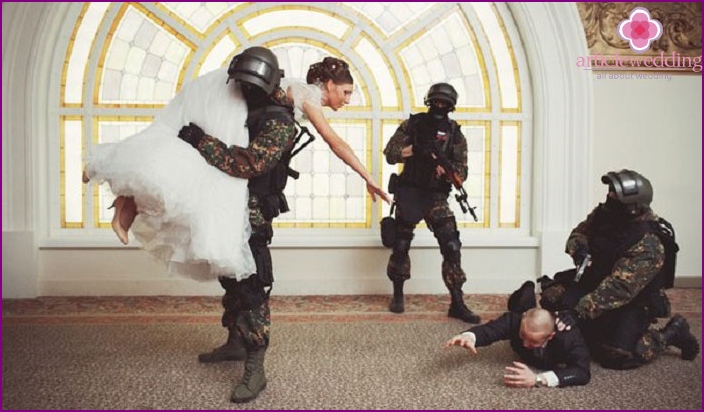 In addition to the above scenarios, there are many more interesting ways to make stealing the bride a fun, original sight. For example, the abduction of a newlywed at a wedding in national costumes. This is a very vivid, spectacular performance with the performance of national dances, songs. Guys in suits steal the young one at the most unexpected moment. And what happens next, see the video below.

Wedding in the sky