Theft of the bride in the Caucasus

An ancient custom - the abduction of a chosen one in the Caucasus is very popular. It is difficult for a modern civilized person to understand and accept this fact. Civil authorities, spiritual leaders, elders, on the one hand, advocate abandoning the ancient heritage of the highlanders, on the other hand, the theft of an attractive bride in the Caucasus is again gaining popularity among young people. What is it like to marry a person whom you often haven’t even seen? How do such stories end? Let's try to understand the intricacies of a Caucasian wedding.

In which cases the bride is stolen?

The history of the origin of tradition is as old as the world. According to chronicles, historical treatises, Slavic peoples, ancient Romans, peoples of the east in this way have long been choosing a soul mate. The Bible book of judges, which tells about the renewal of the Benjamin family through the abduction of the girls of Israel, also confirms this. But let’s leave the affairs of bygone days.

With the development of society, the progress of social and cultural life, women received equal rights with men. But a number of customs, traditions remained the same. It is difficult to judge how good or bad they are. Becoming a wife of a stranger at someone’s whim? Or maybe a lot of love? Many consider this «practice» criminally punishable, and the custom itself is barbaric. Oddly enough, the peoples of the Caucasus, both men and women, support accepted traditions. In what cases do guys resort to stealing a bride in the Caucasus? 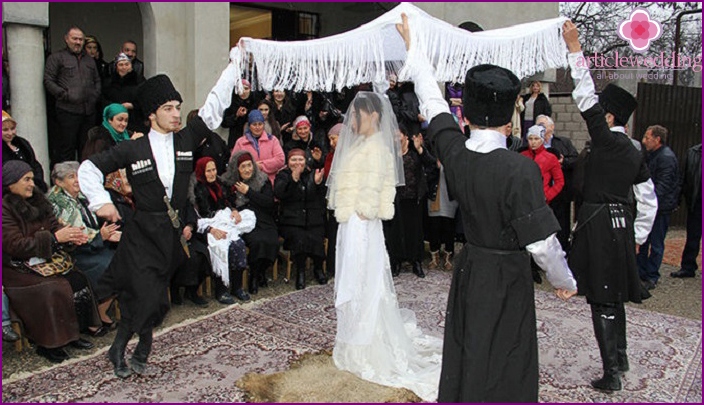 The accepted customs of the peoples of the Caucasus are difficult to consider separately from existing historical traditions. Too many girls believe that true Caucasians emphasize the power of feelings and seriousness of intentions only by kidnapping. Young guys, in turn, come to the conclusion that it is better to meet the girl of your dreams, showing favor to them, than to live with a man who secretly hates his spouse.

How does the abduction process take place? Help in stealing a girl in the Caucasus is usually provided by the groom's family, parents, friends. Ancient legends say that a true dzhigit kidnaps a future spouse on a horse, throws her over the saddle and takes her away in an unknown direction. Currently, the role of the horse is played by an iron horse - a car. Having chosen the right moment when the girl is left alone, a car drives up to her, doors open and one or several young people kidnap the bride, hiding in the car from the scene. 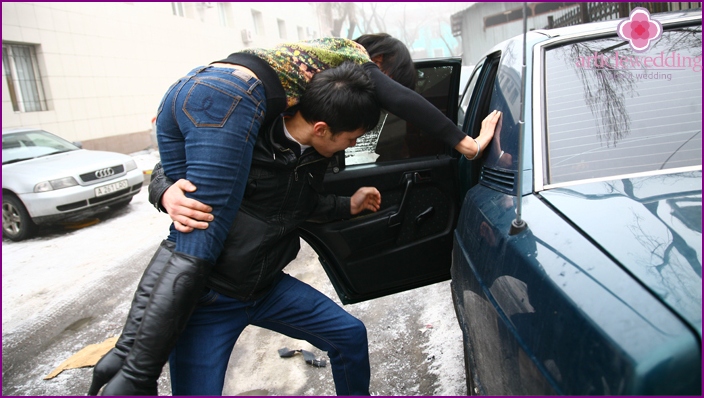 Then the girl is hidden at home with the groom's parents, forcing him to spend the night there. Indeed, according to the traditions of the eastern peoples, if an unmarried woman did not come to sleep home, she is considered disgraced. Her further personal fate is very difficult - no one wants to choose «unclean» bride to wife. So the kidnapped girls have to give their consent to play a wedding so as not to disgrace their family. One of the ways to save honor and avoid marriage for a girl is the following custom: to escape from custody before dawn. 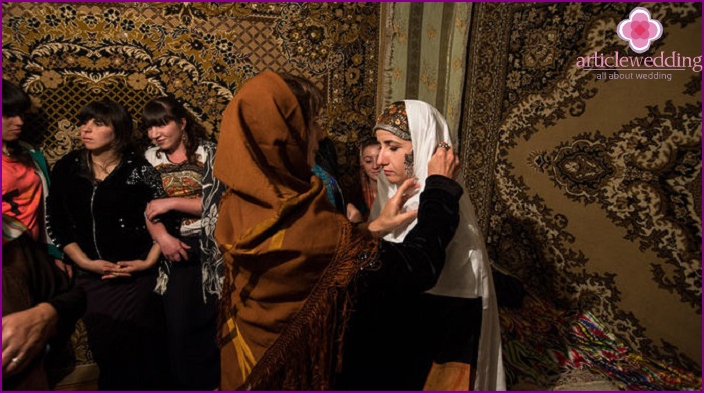 After spending the night under the same roof with the kidnapper, the chosen one makes a choice: agrees to marry or flatly refuses, which can lead to incitement of hostility between families. Having a sexual connection tonight is not critical. Giving consent to the wedding, the bride and groom go to her parents to ask for blessings. The latter, by tradition, refuse him young. After the birth of the first-born, parents change their minds and take the son-in-law into the family.

The official position of religious leaders, elders of the Caucasus is that stealing the bride is not a method for creating a family. The negative state of mind of the abducted girl, often very young, can lead to irreparable consequences, up to suicide. Legislation also safeguards the interests of women. Based on the appeal of the parents to the kidnapper, a criminal case is opened. If in the future the abducted family withdraws the theft statement, deciding everything amicably, and the girl agrees to marriage, claims from the law are withdrawn.

Possible endings to such stories

Many young men, deciding to abduct the bride, are unaware of the possible consequences. It’s great when the ending of this way of creating a family becomes a happy marriage. It is much worse if a young girl is forced to submit to the will of the kidnapper by marrying him. There are not many options for further life: either «to be tolerated - to fall in love» or the unhappy whole life will quietly hate her spouse. There are worse cases when a hot guy from the Caucasus, «having played enough», cools to the chosen one. What do the customs of bride kidnapping lead to??

Experiencing tender feelings for the young man, the beauty of the Caucasus may not be able to marry him for various reasons: family objections, unmarried older sister, and inconsistency of the situation of the bride and groom. Then, the abduction of the bride often ends in a happy ending: the young people marry, as it were, against the will of the bride’s parents, but after the birth of the child, again asking for blessings, they are forgiven. The case of theft remains in the past, a young family, according to customs, is recognized by the girl's parents. 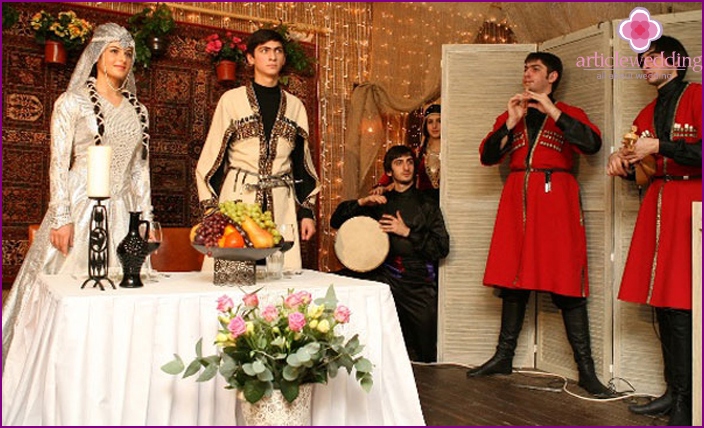 Shame of the bride and enmity between the clans

The tradition of theft involves keeping brides at least one night in the house of the kidnapper or relatives. All this time, the chosen one was persuaded to marry the kidnapper, demonstrating his special qualities: courage, wealth, position in society. There are frequent cases when several days of persuasion take place, and the girl refuses. Then the parents take the girl home, not paying attention to prejudice. Sometimes the recalcitrant bride is let home by the groom himself, preferring to find someone less obstinate.

The abduction of daughters is a disgrace and disrespect for the bride's family. The result is a family feud between clans, reaching bloody showdowns and revenge. The direct participants in the events are most affected by what is happening, solving the most difficult dilemma: getting married to an unloved guy or shame for the rest of their lives. Young girls do not want to become the cause of tribal hatred, enmity. So they are forced to get married. It’s great if a husband turns out to be a kind person who will eventually win the love and tenderness of his wife.

The authorities, the spiritual leaders of the Caucasus are trying to influence the situation: according to the laws of the state, according to the laws of Sharia, the abduction of the bride, psychological violence, especially physical violence, is unacceptable. The Criminal Code provides for articles on kidnapping. The native girls file a complaint with the police, and the abductor and his accomplices, if there is evidence, are facing arrest and imprisonment for 5 to 15 years. 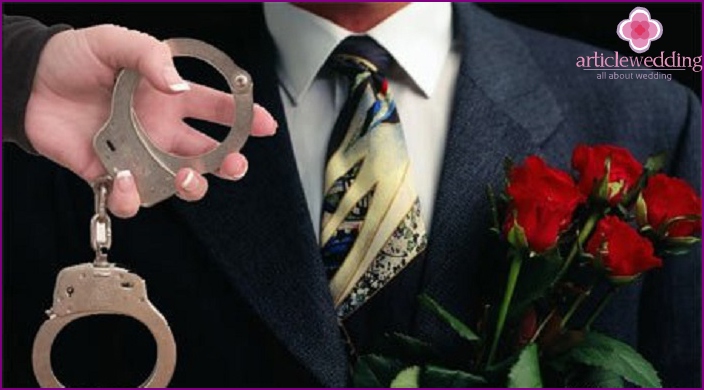 Cases where theft is warranted

It is possible to justify the abduction of a young beauty in the Caucasus in some cases:

How to play a wedding in the best traditions of the East? Observance of ancient customs for modern youth of the Caucasus is often a tribute to their ancestors. In megacities, large cities, young people perceive the abduction of their beloved girl as a theatrical performance. Flags of the clan or clan on the hood of the car symbolize purity of intentions, and the theft becomes proof of the seriousness of the feelings of Caucasians. The chosen one is happy, because for her sake the young man decided to abduct. How does the bride steal by mutual consent in the Caucasus? Watch our video.