Few people know how the wedding should be held in China, what customs are followed, how the ceremony itself is prepared. This country has its own unique traditions and numerous rules for holding a wedding celebration, which must be strictly observed. It is simply impossible to list them completely, but the Chinese wedding is very beautiful and unusual. Therefore, many people are interested in getting to know the features and subtleties of holding this celebration.

If you do not like template holidays, but want your own wedding to be unusual and memorable for all guests for a long time, not to become a boring, lifeless day without pleasant memories - you should familiarize yourself with the main traditions of holding a Chinese wedding in more detail. Thanks to this, you can travel to a beautiful fairy tale, feel like a real Chinese woman. 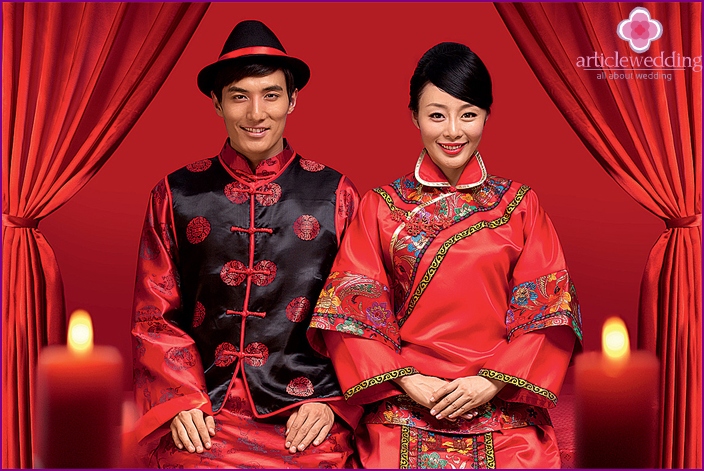 Before the matchmaking of the groom is held, the young one sends the bride's family a special preliminary note card on which eight hieroglyphs of life should be indicated. It is written not only the name of the groom, but also the day, month, hour, year of his birth. This data will be used during the divination. When everything goes well and the marriage promises to be successful, the same data about the bride will be sent to the young. The card is in the house for three days, if during this time nothing bad happens, the parents give their consent to the marriage.

The groom's family should invite the matchmaker, who is entrusted with the official visit to the bride’s house. During this visit, the exact date and time of birth of the young, her name is recognized. These data are used by the astrologer, a horoscope who simultaneously checks whether the lovers can be together, and what fate awaits this couple ahead. In certain ethnic minorities of China, there are interesting traditions, for example, the Blang people have a custom to send a matchmaker with cigarettes and a pack of tea to the bride’s house (this is a symbolic gift).

The Chinese wedding also includes a modern prenuptial agreement. A red sheet of paper is taken, mutual marriage guarantees are written on it - the dragon is depicted on the groom, and the phoenix on the bride. The drawn up contract should contain information about the young, their families. Necessarily prescribed in the marriage contract and the amount of ransom, which the bridegroom makes for the bride. 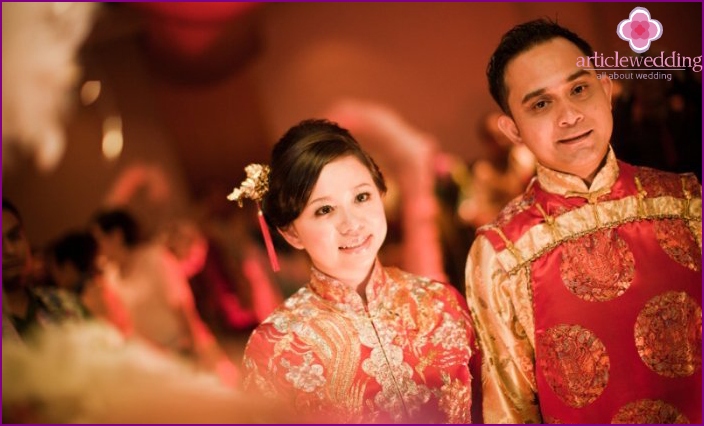 Particular attention should be paid to choosing a wedding date. To this end, the parents of the groom should invite a fortuneteller, which determines the number, and then the two families begin preparations for the wedding ceremony. The most important thing is that the chosen day be auspicious - in China it is believed that an improperly selected wedding date can disrupt the happiness of a young family. As soon as the number is picked up, it is communicated to the bride's relatives.

Mourning the loss of family

The Chinese wedding has one interesting and unusual tradition - mourning the loss of relatives. Representatives of this nation have always been reverent not only in the process of marriage, but also in the institution of the family. Before a girl marries, she must mourn the loss of loved ones. To this end, they all go together to some cozy place where they give the bride time so that she can say goodbye to her parents and other relatives.

At first glance, it might seem that such a joint evening resembles a cheerful bachelorette party. But everything is completely wrong - this ceremony is very touching and sad. After all, the bride must say goodbye to her family, and after the wedding she will belong only to her husband. Therefore, the event is similar to a bachelorette party only in that people gather close to the bride in one place. 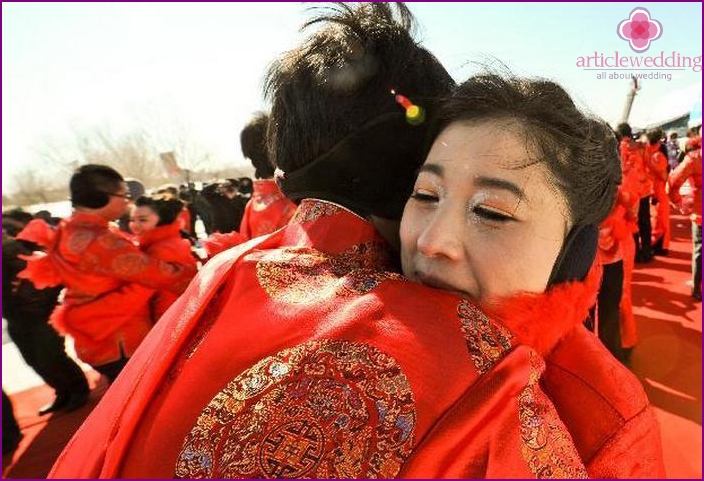 The phased process of holding a Chinese wedding

A wedding in China is a very beautiful ceremony that will symbolize the birth of a new happy family. This marriage ceremony should contain several main stages: 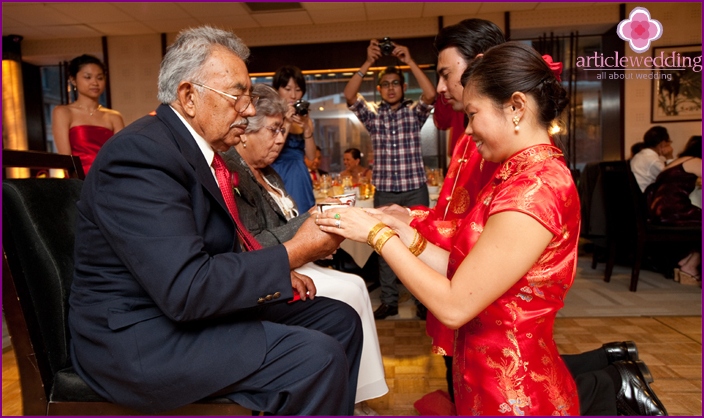 Immediately on the wedding day, the young one brings gifts wrapped in red fabric to the bride’s house. Almost always, gold coins are a present for which young girlfriends are released from home. The gift should also contain a beautiful pair of earrings, four bracelets. Such a present is not in vain called «tea», because in China, tea symbolizes fertility, marital fidelity.

As a ransom, the groom gives not only money, but also other gifts that the newlyweds determine in advance. The Chinese pre-wedding ceremony is held using another ancient rite. As soon as the young ransom passes, the groom kneels in front of the parents and gives them a cup of tea, which asks them for permission to marry.

The wedding procession should be advanced to the groom's house, and the bride is riding in a palanquin. This was done so that the young woman would not bring dust, dirt to the house of her future husband. This procession foreshadowed the birth of a new family, therefore it was accompanied by explosions of crackers, fireworks, which not only entertained passers-by, but also drove away evil spirits - this is an obligatory part of the Chinese wedding ceremony.

The wedding cycle continued with a noisy and cheerful meeting of the bride in the groom's house, accompanied by a variety of ancient traditions. A small table was set up in the courtyard (center), which was called the altar of worship of gods - future spouses approached him, bowed to the gods of heaven, sun, moon, earth, after which the marriage was considered to be concluded. This rite notified heavenly forces of the birth of a new family.

Throughout the wedding, the bride is silent, because according to ancient traditions, this contributed to the birth of heirs. Young was forbidden to eat during the holiday and she was considered a beautiful silent statue at her own wedding. So the wedding in China took place only a few centuries ago, but the modern celebration is held without strict observance of all the rites.

But the Chinese follow some wedding traditions - always at the wedding there is a red color and sweet wine, which is considered lucky, able to bring fidelity to the couple. The bride can safely choose a dress of a traditional color, but you need to complement the image with red shoes. Most Chinese girls prefer not the European version, but a red dress or bathrobe of the same color. But there are also modern traditions - for example, cake in China is the main dish, and its size should impress guests.

Wedding on the rise

The Chinese very strongly believe in astrology and the wedding date should be chosen strictly according to the astrological calendar. The main thing is that the wedding ceremony itself takes place only in the second half of the hour, after the clock hands pass the mark of 30 minutes. This is because the arrows begin to rise and are a symbol of creating a new family on the rise. If the young people get married during the first half of an hour, they begin a life together in a recession..

The main distinguishing feature of a wedding cake in China is its size. It is customary to bring a pie into the hall to the cheers of the guests. A tiger or a snake can decorate the cake, so it is not at all surprising that the dessert is considered one of the main and brightest parts of the wedding. It is important that the cake itself consist of a large number of steps and not be too narrow - this is a symbol of the ladder for the young into a happy joint future. Therefore, for the wedding in China, they simply bake huge cakes so that the future of the new family is bright. Young must feed each other cake.

Features of makeup and dress of brides in China - photo

The bride was supposed to begin preparations the day before the wedding - on the eve of the celebration, the girl removed all her hair from her face and applied a thick layer of powder, which created a kind of unnatural mask. The image was supplemented with bright red lipstick and black arrows. Modern brides do not always follow old traditions and prefer restrained make-up, slightly emphasizing eyes and highlighting lips.

A wedding in China is an incredibly beautiful and original ceremony, which requires special preparation and a more thorough study of the traditions of this country. If you want to conduct a thematic wedding, chose the ceremony, then it will be interesting and useful for you to familiarize yourself with the next video, which details all the subtleties and nuances of a wedding in China.