A honeymoon is an important part of the life of a couple in love, because this is a great opportunity together not only to relax, but also to explore the culture of another country. August is especially good for a honeymoon, when in exotic countries the heat is not so strong, and in the tropics the rainy season has not yet begun. When the bride’s dress is bought, a festive table is ordered and everything is ready to visit the registry office, the newlyweds only have to decide one question: where to go on a honeymoon?

Features of rest in August

August is a high season, which means tour packages are becoming expensive. And the more prestigious, respectable the resort, the higher the prices, so if the honeymoon budget of the newlyweds is not too high, then it is better for them to choose a vacation in August in a small resort. For example, do not look after the French Riviera, but spend a romantic month on the Greek island of Crete. In all other respects, August is blessed for the honeymoon period of the newlyweds.

Where to go on a honeymoon

Where to go to the newlyweds in August? There are thousands of fabulous places on the planet that are ready to give lovers an unforgettable honeymoon: this is mysterious Asia, fairytale Europe, uncharted islands or a cruise on a boat around the world. Traditionally, newlyweds for a honeymoon choose a vacation on the sea or ocean, so that there is golden pure sand, exotic nature and solitude. Friendly Dominican Republic, exotic countries of Asia, islands of French Polynesia meet these requirements..

But some newlyweds prefer traveling, in which you can learn a new culture, visit ancient places, participate in unusual rites. For such a honeymoon, the countries of Europe, India, China, Indonesia are ideal. Newlyweds are waiting for interesting excursions, acquaintance with the most ancient civilizations, architectural monuments. There are places where lovers can combine a wonderful beach holiday with exciting excursion programs on their honeymoon. We’ll talk about them now.

Greece is attractive to tourists at any time of the year, but the high season falls on August. During this period, the minimum probability of rain and the maximum temperature regime is reached - in the daytime up to +35 degrees. This country conquers at first sight, because there is no such variety of natural resources, architectural monuments and attractions located in a small territory anywhere, therefore it is ideal for a honeymoon.

The nature of the Greek islands fascinates: plains, mountains, rivers, the sea, olive groves, pine forests. Greece is considered the most environmentally friendly European country, and the waters of the Aegean and Mediterranean seas in its areas of UNESCO recognized as the cleanest. Whatever type of vacation the newlyweds choose for their honeymoon, Greece has something to offer them in August: 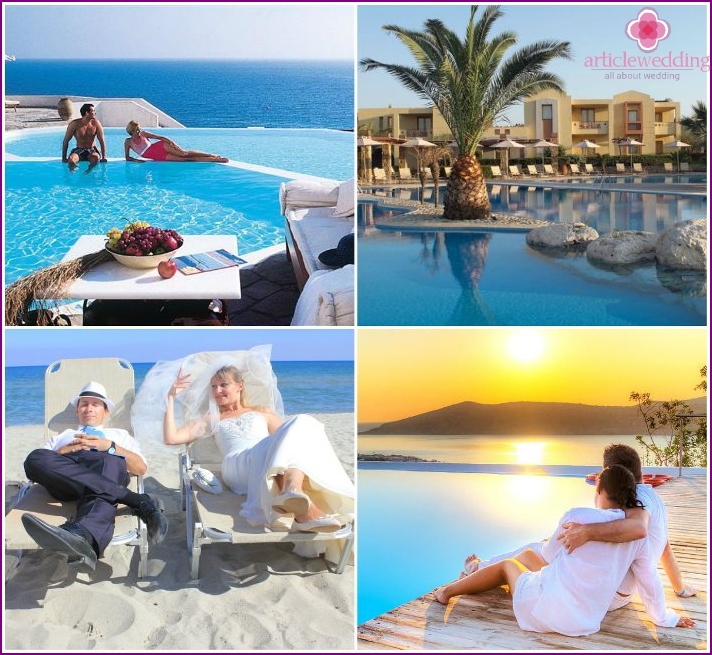 August for Italy is an influx of tourists from all over the world. Italian motorways are becoming overloaded, and hours of traffic jams are constant travel companions. If the newlyweds are not afraid, then the honeymoon should be spent here. After all, Rome - «capital of the world», Venice - «betrothed to the sea», and Florence - «new Athens» - so called the leading cities of Italy. But there are still Tiwoi, Pompeii, Genoa, Naples, as well as many other amazing places that played a huge role in world history.

Italy is a sunny country with an atmosphere conducive to relaxation and fun, so the honeymoon will be spent for every taste. A variety of landscapes, volcanoes, picturesque plains, beautiful bays, first-class beaches, mountain peaks - newlyweds will not have enough of one month of August to see at least part of this magnificence. The most beautiful beaches in Italy await lovers in Sardinia - the crossroads of the most ancient civilizations of Europe and Africa. 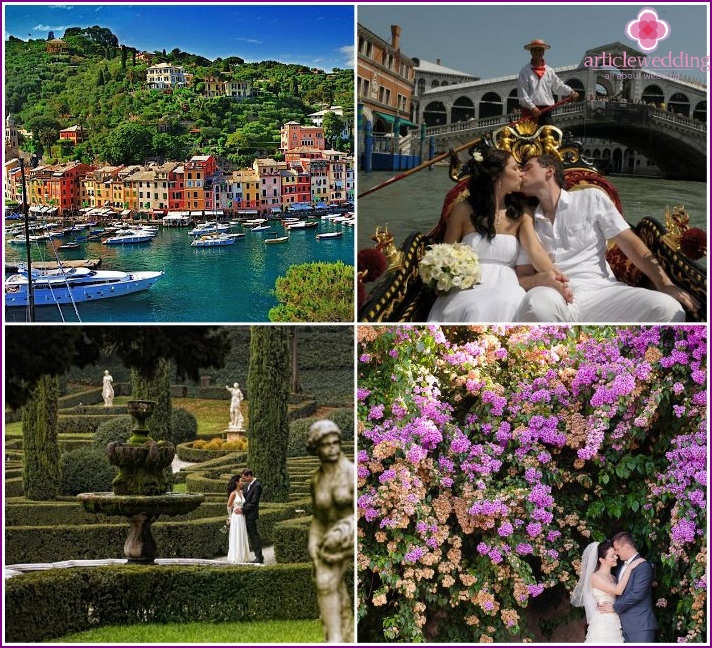 August in exotic and distant Thailand is the rainy season. But let this not frighten the lovers, because tropical rain does not take more than 15 minutes, and then the bright sun shines again. Thailand is as beautiful in August as it is in any other season, so you should not cancel your honeymoon due to weather conditions. A trip to the country of Siam is a meeting with the fairy kingdom, where the newlyweds will forget about all the worries.

This country is perfect for lovers of diving and evening walks, couples who prefer to spend their honeymoon on the beach and travelers who study ancient cultures. The beaches of Krabi province and the magnificent temples of Chiang Mai will not leave anyone indifferent. Culinary adventures await the newlyweds on every corner: a variety of pieces of exotic food and the smiles of all locals without exception. 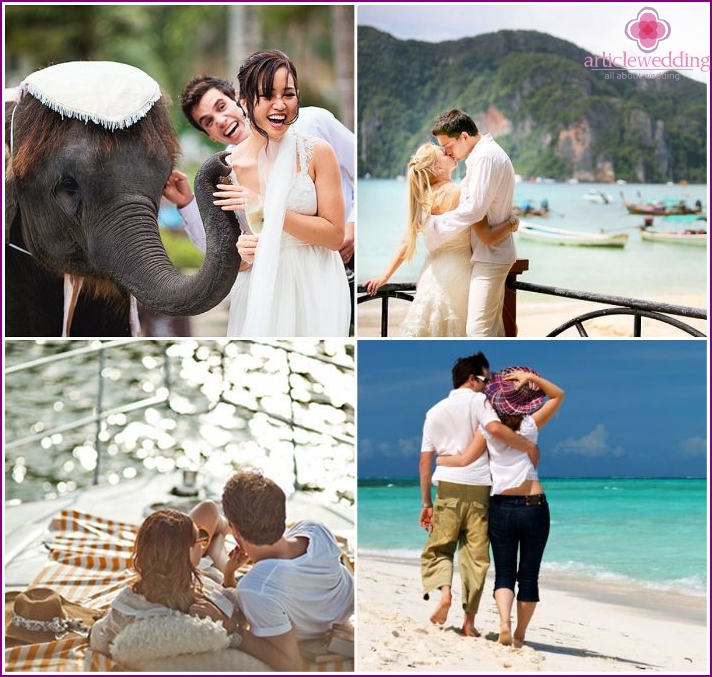 August relieves the blessed lands from the July heat, so the flow of tourists who want to swim in the salty waters of the Dead Sea or visit holy places is increasing. Israel offers newlyweds in August absolutely any entertainment - from the sublime to the earthly. This is the lowest point of the Earth - the Dead Sea, the spiritual height of Jerusalem, modern cities, excavations of ancient civilizations, the Western Wall, hospitals with mineral waters.

Israel is a small country, but it contains everything: dried deserts and beautiful mountains, coral reefs of the Red Sea and the unique Dead Sea, sandy beaches of the Mediterranean and the healing springs of Hamat Gadera. During their honeymoon, the newlyweds will certainly feel the thrill of meeting with the history of Israel, because the foot of Abraham, David, Christ and the Crusaders has stepped on this earth. Every stone here keeps secrets of history. 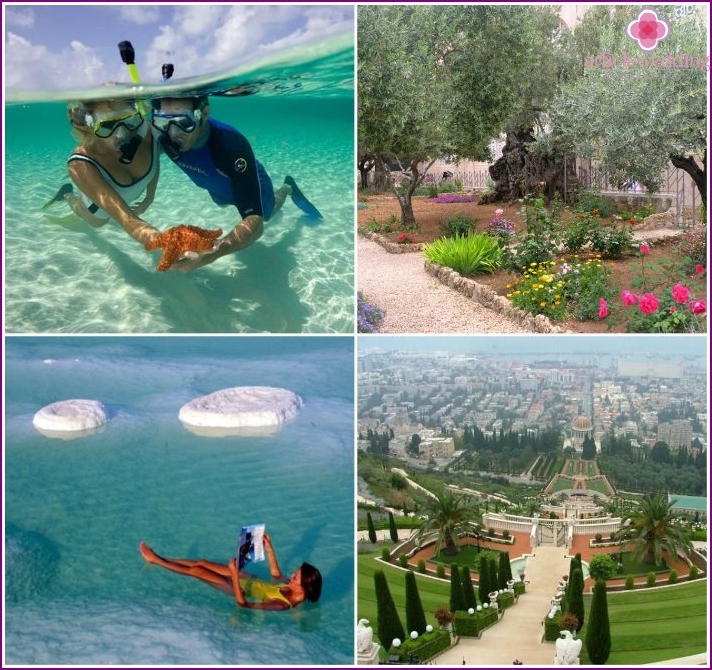 August is considered to be the most favorable month for traveling to the Indonesian island of Bali. Although fans of tropical vacations tend to get to a tropical island in winter, the August Bali will delight newlyweds no less. That's because August is the height of the tropical winter and the coldest month for locals. For Europeans, this is the most favorable time when the heat decreases and tropical humidity decreases.

Bali Island is an evergreen masterpiece of nature and decoration of the Indonesian archipelago. The honeymooners will not only plunge into the world of unique body treatments that are based on ancient recipes, but will also witness the sacred ceremonies that take place on the island almost every day. After all, the culture of Bali is an island of the Hindu faith in the most populous Muslim Indonesia. 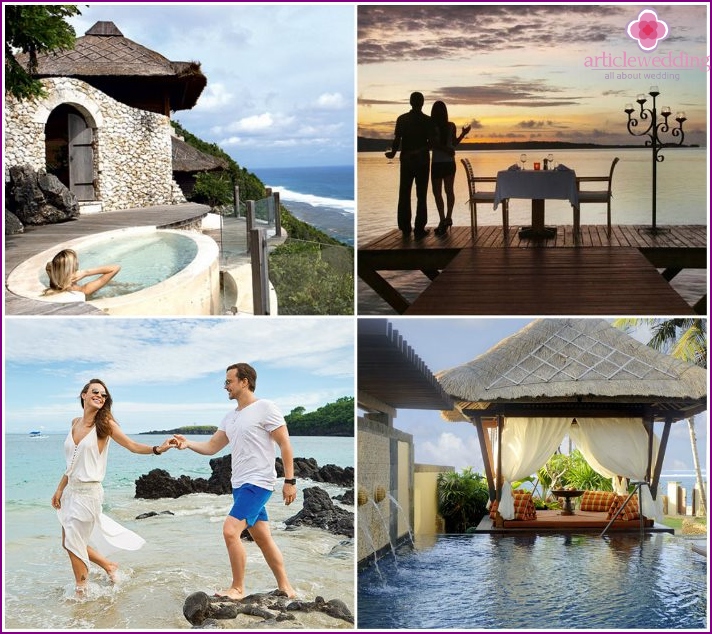 August for the islands of French Polynesia is the best time to visit when the water temperature is +26 degrees and the average air temperature is +27. This perfect combination makes the holidays on the islands in August a paradise. Moreover, the island of Bora Bora is without exaggeration called paradise on Earth. Bora Bora is an atoll in the middle of the Pacific Ocean, which was formed from an extinct volcano. This is a green island, densely overgrown with palm trees with a magnificent pearl lagoon, rare birds and outlandish flowers..

Newlyweds enjoy the beauty of Bora Bora better during study tours of the island: 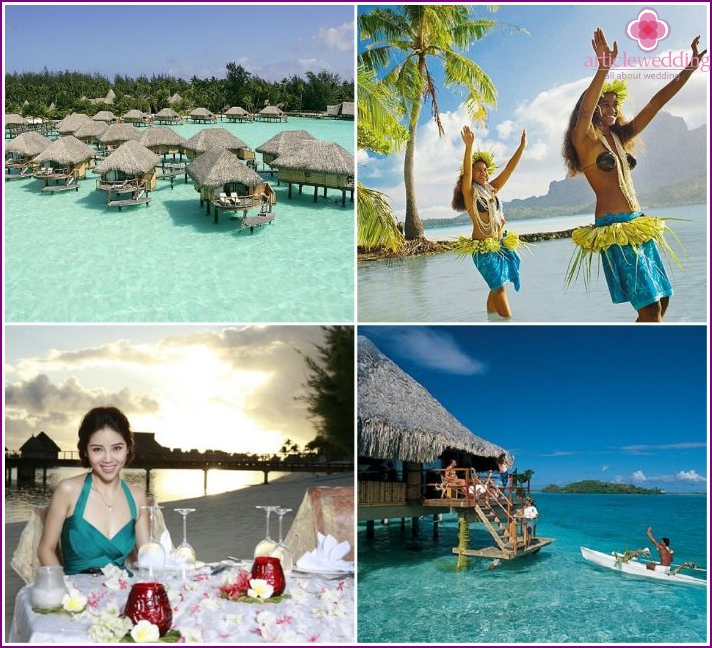 Where to spend a cheap honeymoon

August is the month of holidays, so you can’t find last-minute trips. If the couple has a limited budget, then Turkey will offer them a cheap honeymoon. This beautiful country has many advantages: unique nature, clear sea, Russian-speaking staff, and most importantly - affordable tours all year round. August is considered a favorable period for Turkey, unlike the rest of the summer months.

Egypt also offers a cheap honeymoon, but it's hot in the summer. If the newlyweds are not afraid, then they will have a magnificent budget trip after the wedding in the country of the pyramids, the most beautiful Red Sea and the most ancient civilization. Honeymoon romance will be complemented by beautiful sunsets in the desert, a visit to the Cairo National Museum, the tomb of Tutankhamun, the Giza pyramids.

What to do on a honeymoon for newlyweds

A honeymoon is not necessarily a beach holiday or walking on tourist routes. This is a great time to take care of your health, take a massage course, learn how to cook Thai / Mediterranean dishes or learn how to make cheese. Any country has objects for acquiring new knowledge, the main thing is to do everything together to «august for two» brought young people even closer.

What a honeymoon is good in August

August in Russia means cool gusts of wind, barely noticeable, but already yellow leaves on some trees and apples in abundance in autumn. In August, sunsets quickly shorten, and lovers look at the stars and say goodbye to the summer. And then it becomes possible to go on a honeymoon to a country where it is never cold, where it is always warm and the gentle sea hugs with transparent turquoise waves - this is what August is good for newlyweds!