Marriage is a very personal event, at the time of which only the closest people should be able to sincerely share the happiness of the bride and groom. Therefore, a wedding for 20 people can be an ideal option, because will create a cozy, romantic atmosphere. But with so many people, it makes no sense to order a professional presenter - everything can be easily organized on your own. The following is a scenario of holding a wedding banquet without a host, which will help to make the celebration fun, interesting.

The preparation of the entertainment part should begin several months before the wedding, even if the event is designed for a small number of people. During the wedding preparations, you may need the attributes that you need to order, and the program may contain numbers that you need to prepare for (preparing a greeting number from each guest will be a great way to diversify the celebration). It is worth paying special attention to:

Decoration of the venue

A banquet hall rented for a small wedding can be decorated with the efforts of the bridesmaids the room will not be too big, and the wedding celebration is held in the circle of the closest. Balloons filled with helium and air, garlands with flags, pompons, crystals, paper hearts, bows, ribbons can be used. Balls and hearts are especially important because the former will be used in wedding competitions, and the latter will reveal the theme of love and the role of the leading Amur. 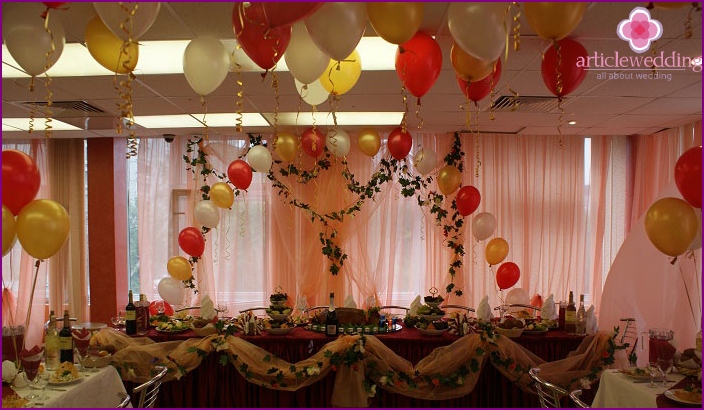 Decide who among the guests is able to play the role of the wedding leader in the script - Cupid. This should be a cheerful, relaxed person, sincerely, responsibly related to the event, able to maintain all his activity, sobriety of the mind until the end of the wedding. Amur will need helpers, it can be witnesses (it is better if there will be several of them). No other scripted characters.

According to the scenario, after the meeting of the bride and groom, the family of the newlyweds in the banquet hall, the guests gather at the wedding table, pour champagne into glasses, one of them is going to say:

Friend of the groom with the bride:

- Here I look at you, and my heart is filled with love, right all my essence is filled with a bright feeling ... Guys, I'm not joking, something is really happening to me! My wings are growing!

He puts cupid wings on his back, a cylinder and completes the image with a magic wand.

- You know, I am a sensitive person, and from this stream of romance I turned into a cupid, call me Cupid! A good sign when cupids are born at weddings, this means that the love between the bride and groom is real! Let’s drink, for the sincere feeling between these two people!

Those present drink for the bride and groom.

- I know that you want to say a lot of good words to the bride and groom, but many are still embarrassed. I want to help you find the right words! There are a lot of good wishes in my magic top hat (removes a hat), though they were mixed up, but they didn’t become less sincere!

Cupid explains the rules of the wedding game «Wishes», guests perform an assignment, read funny toasts for the bride and groom.

- Good toasts came out, right? Everyone has already been amused, and I'm sure we are ready to say something on my own!

Those who wish congratulate the groom, the bride, there is a wedding feast.

- A wonderful toast was about prosperity, but to get wealth in our time, I’m afraid I can’t do without Chicken-Ryaba! I again had magical leaves in my cylinder, some of them empty, some with names, who would pull out with an inscription - I ask on stage!

Further, according to the script, a wedding competition is held. «Chicken Ryaba», You can see how to organize it correctly in this video:

- Where is the bride? Has anyone seen a newlywed? Where did she go? Look at her girlfriends, how tricky they are! You know, probably, where the bride went?

- Tell me where is my darling?

We hid her in a safe place to make sure,

That the groom is well done, yet that good man!

He’ll find her everywhere, save her from any misfortune!

But we can give the groom a card -

Where the bride is waiting.

Let him take his friends -

Next, the wedding game is held according to the script. «Bride search».

- Well done groom, found a bride ... but not completely! A pair of newlywed shoes with me! And it’s easy for you not to get them! Lovers, come here! Everyone else is coming too! Now we will split into teams, one headed by the groom, the other by the bride. Whose team wins, she will take the shoes!

- The groom will take the shoes - correct his mistake, and if the bride?

- Let's make it so that whose team wins, in addition to the shoes, gets the opportunity to come up with a task for the losing team!

Next, the wedding relay race is held according to the scenario. «Caterpillar», the bride’s shoes are handed to the winners; they also give the losers a fun task as a gift.

Friends of the groom:

- Our fiancé proved that he was a fine fellow, but he was attacked by a disease called «Naughty». He does not eat, does not drink, he is not interested in anything, if only to lie on the couch all day. Do not defeat him to attack himself. Bride, how will you save your beloved??

- You see, what a strong love our newlyweds have: the bridegroom of the barrier will pass to return the beloved, the bride, like a ray of light, will save her husband from the blues and gloom. Dear newlyweds, you were married, and now you have the opportunity to dance your first dance in this new, but in such a happy status for you!

Sounds music, the bride and groom are dancing their first wedding dance. 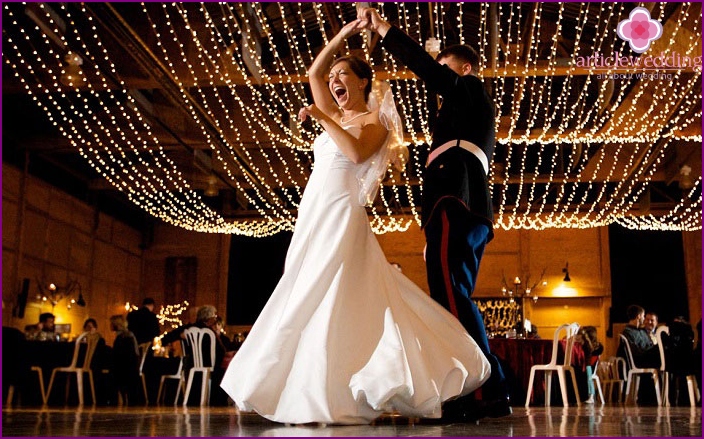 - Well, now let's dance the Amur dance together! Become in the ranks and repeat after me!

Further, according to the script, Cupid explains the rules of the dance flash mob, guests perform the dance. At the end of the wedding, according to custom, a wedding cake is made, fireworks are launched, guests continue to dance and have fun.

This wedding entertainment is arranged by the witness and the bride for the groom, friends and other guests. The conspiratorial girlfriends quietly hide the bride or her thing somewhere in the room or in the park area near the banquet hall (if a vacation spot has been rented for the wedding), they draw and give the newlywed a search card. On the map is marked not just a route, but a relay race for the groom and the team, having passed, they will receive a diagram or a hint of the place where the bride is hiding. 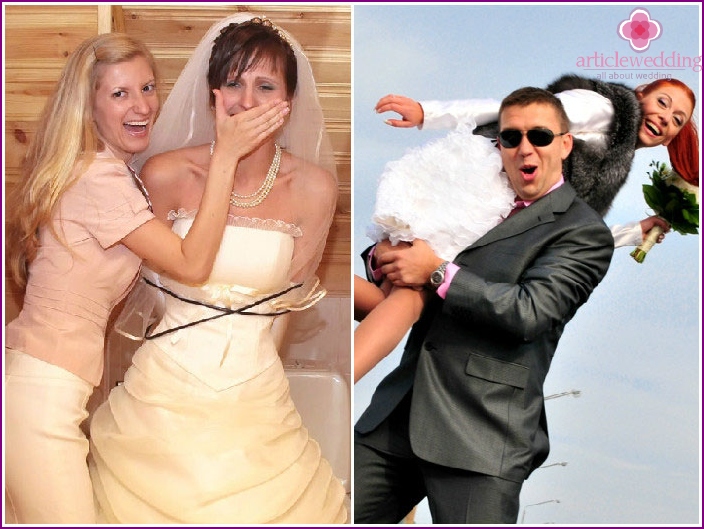 Cupid or witness at the wedding makes a statement that the groom attacked the disease «Bad». The hero is seated in a prominent place where, with his arms crossed, making a frowning face, he must depict whims and despondency. The bride is entrusted with curing the groom - returning his joy. Girlfriends read out a list of what needs to be done (to feed, show football, caress). The hero should try not to smile, portray a capricious child, until the bride calls her beloved smile, when this happens, the task will be completed - the lost joy is returned, the groom is cured.

Games and entertainment for guests

Print small wedding wishes on paper with sticky backing, cut them word by word or into expressions, put them in the Cupid’s cylinder. There should be a lot of fragments, so that it would be enough for everyone to take a few pieces. Give the guests a sheet, let the cylinder circle the table. Having received this piece of paper, the guest should, without looking, take out 1 piece and stick it on the paper. After 5 laps each will have a whole phrase. By changing the cases so that the proposal makes sense, invitees should solemnly recite their wedding toast to the bride and groom.

Those present are divided into two teams (10 people each), at the head of one may be the groom, the other - the bride (if the style of the dress allows you to complete the task). The task of the commanders is to take the balloons, place them between the calves of the legs and pass (not jump!) The entire designated distance. Having traveled the round-trip distance, the participant (bride or groom) grabs the next one from his team, who, placing the ball between the calves, takes the first player by the waist, and passes the same distance with him.

Upon returning, they capture the third, fourth, and so on, until the whole team chain returns to its original position. Those who will quickly gather in the caterpillar and go all the specified path will win. If someone drops a ball or bursts, the entire caterpillar must stop, wait until the object is returned to its place, and only then continue further movement.

All those present are invited to the dance floor, they line up in rows of 4-5 people. 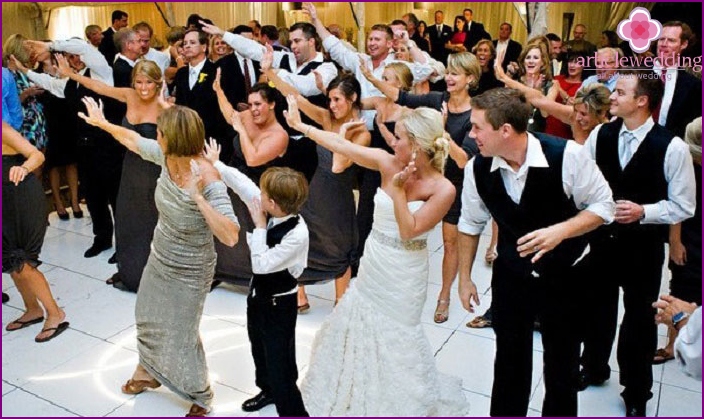 End of the evening

The end of the wedding evening should be memorable, vibrant, able to create a magical atmosphere, and therefore it is worth ordering fireworks, fire shows, singers or a group of musicians. An original way to end the wedding with a small number of guests will be to rent a limousine for a walk around the night city, which will subsequently be able to get everyone, including the bride and groom, to their homes. 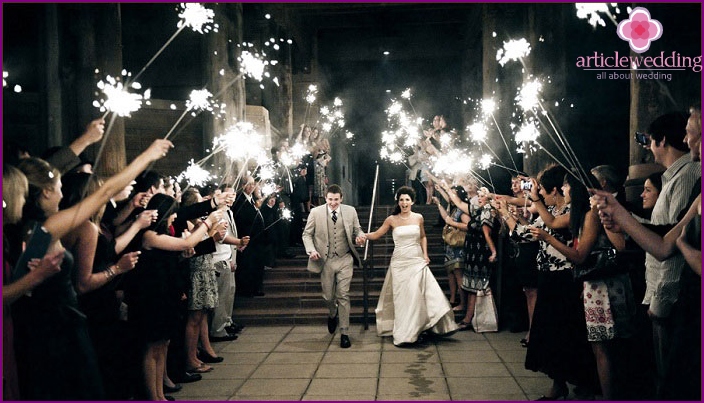 The proposed scenario for a small wedding will allow you to spend the holiday on your own, to do without the services of a host and professional hosts. The role of Cupid is spelled out so as not to overload the guest who will lead the wedding event with excessive responsibility and complex text - so he will also be able to relax. In a small team there is no great need to constantly stir up interest - to organize 20 people, you only need to submit an idea.