The union of a man and a woman, concluded in the manner prescribed by law, is called marriage. After its registration, spouses have property and non-property rights. There is a strict procedure for marriage, which is prescribed by the law of the Russian Federation. Despite the prevalence of the facts of the marriage in the church, a civil act will take legal force only when it is registered by the registry office.

Parties that intend to register a marriage should include a correctly executed application with the registry office. The submission of papers does not provide for legal consequences, so the parties can at any time abandon their decision to marry. The absence of at least one person in the registry office for registration of a civil act is perceived as a refusal to conclude a marriage.

The registration procedure is prescribed by the family legislation of Russia, which provides for a one-month period between the submission of the application and the conclusion of the civil act. He is needed so that the bride and groom finally ascertain the seriousness of their intentions or declare circumstances that may hinder the registration of marriage. The law provides for the possibility of drawing up a civil act before the passage of a month or to extend the waiting period for another month, if there are good reasons for this.

Legislation allows marriage on the same day that the young people filed an application, but there is no list of compelling circumstances. This was allowed by the registry office on the fact of the pregnancy of the girl, the birth of the child, the draft of the groom to the army, the immediate threat to the life of one of the spouses, the upcoming one of the future spouses of an urgent long trip. Another reason for this decision is that the man and woman have been living together for a long time. These reasons must be documented..

According to the current procedure, the bride and groom have the right to extend the waiting period before the marriage. There may be respectful circumstances: the need to better prepare for the celebration, the desire to wait for the arrival of relatives or friends. The procedure provides that not only the bride and groom, but also the parents, and in certain cases, public or state institutions, are entitled to apply for changing the date of marriage. 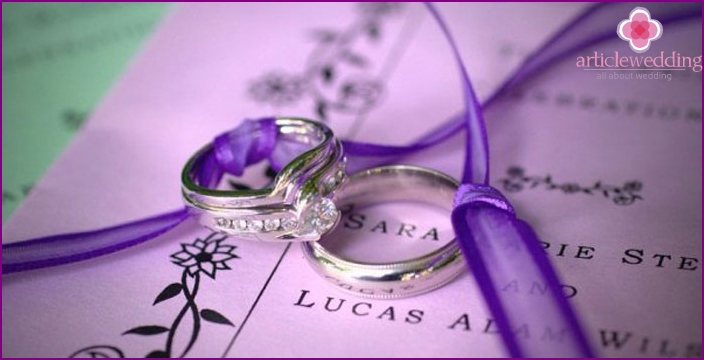 There are only five ways to apply in Russia. The bride and groom can:

The order of marriage is prescribed in Article 11 of the Family Code of the Russian Federation, according to which the conclusion of a civil act occurs with the personal presence of both parties. Newlyweds are required to appear in the registry office, marriage is not allowed in the absence of any of the parties. You cannot marry using the services of a representative or on the basis of a statement that was written only by one of the parties. If one person is located outside Russia, his expression of will may be issued in a separate application, and the signature shall be certified by a notary or consul of the Russian Federation in the host country.

Necessary documents for registration of marriage in the registry office

The bride and groom, in accordance with the current procedure, for marriage must present the following documents to the registry office:

In order to marry a Russian citizen with a foreign citizen, in addition to the documents listed above, you need: a notarized translation of your passport, a visa or migration card and a document that will confirm his marital status. The procedure provides that documents of citizens from far abroad are subject to legalization by the consul (or through apostille). All papers in a foreign language must be translated into Russian and certified by a notary. 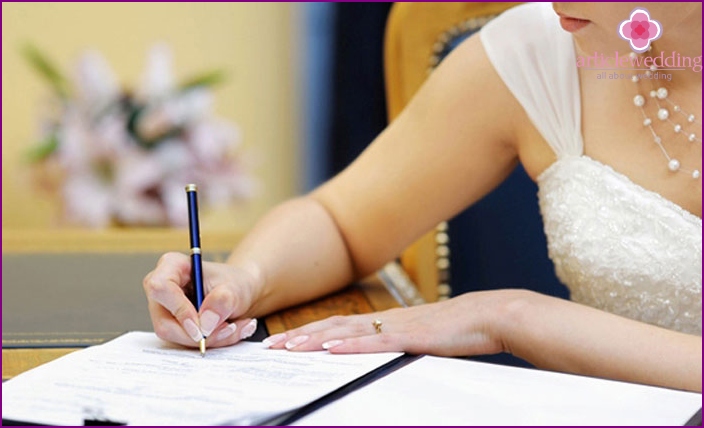 The state duty charged for registering a marriage in Russia is 350 rubles; any party can pay it. In the graph «payer» The name of the person who paid the required amount is indicated. Payment details for state duties are the same for all bodies of registry offices in Moscow (for each specific city - separate). It is stipulated that the state duty is not refundable even if the parties change their mind about registering a civil act.

Familiarization with rights and obligations

Accepting the application, the registry office employee must familiarize the parties with the conditions or procedure for concluding a civil act, talk about their responsibility, responsibilities in the role of future spouses and parents. Employees of the state agency must make sure that people are aware of each other's health and official marital status. The parties must be warned about the responsibility that threatens them for concealing obstructive facts for concluding a civil act.

The law divides property into premarital and acquired during family life. Joint property is considered to be property acquired by spouses during marriage. Two parties have equal rights to own and dispose of it, unless otherwise provided by the marriage contract. The personal property of any of the spouses may be:

Acceptance of application by state bodies of registry office

The stage of submitting a joint application for marriage to the registry office indicates the intention of the parties to start a family, but does not give rise to any legal relations and does not bind individuals with obligations. At any time, a party may refuse the decision to draw up a civil act and not arrive at the agreed time for registration. However, the procedure provides that a decision to refuse to conclude a civil act must be made by a man and a woman before state registration.

This is the oldest custom of marriage, which has long been in force in Russian society. Previously, engagement was a legal custom, and later it was completely abolished. From now on, engagement is called a ceremony of marriage, which has no legal force. According to the current procedure, the rights and obligations of spouses, stipulated by law, arise only after marriage.

Registration of civil acts is carried out at the registry office with the personal presence of both persons. However, if one of the parties is unable to come due to a serious illness or for another good reason, registration can be done elsewhere. The procedure provides that marriage with a convicted citizen who is in custody is carried out by an official of the registry office in the premises, which for this purpose will be determined by the head of the place of deprivation of liberty in agreement with the leadership of the civil registration authority.

Registration of a civil act is carried out by an official of the registry office by making an appropriate entry in the state registry. Spouses who are married are given a certificate. The civil status act is recorded in duplicate, with the first being created within a year and entered in the assembly book. The procedure in force on the territory of the Russian Federation stipulates the need to attach to the application all documents confirming the facts to be registered.