Romantic, indescribably delightful wedding ceremony - is your dream? Make an unforgettable registration in one of the most beautiful places on the planet. How to combine romance, thirst for new discoveries and holiday celebration? The wedding ceremony in India will leave an indelible impression, give vivid emotions, connecting loving hearts with sacred bonds. The ancient traditions of this country will help to better understand each other, and the solemn marriage will become a symbol of unity of souls..

Benefits of having a wedding ceremony in India

A wedding for residents of India is one of the most important events in life. The spiritual heritage, ancient rituals, and particularities of religion - Hinduism - emphasize the crucial role of the sacred unity of the soul of the bride and groom. What Europeans should learn is a reverent attitude towards the institution of family and marriage: the percentage of divorces in India is negligible. Why is this country so popular?

When choosing a wedding ceremony in India should take into account a number of points that may overshadow the celebration. Knowing previously about the pitfalls, future spouses can easily avoid the following disadvantages:

How to organize a wedding in India

Preparing for an in-house wedding ceremony in India will take a long time. It requires a good knowledge of the English language, patience when discussing key issues with service providers: transport (it does not matter if it is an elephant or a limousine); rental (tent for the ceremony); weddings (Brahmin priest) and many others. It is advisable to organize a wedding on your own if:

It’s easier and more convenient to contact a travel company that will help organize a wedding ceremony taking into account the wishes of the client. The financial component will be more significant. Lack of «headache» about certain aspects of the wedding in India, Russian-speaking accompaniment - these moments outweigh the desire to personally organize the ceremony. 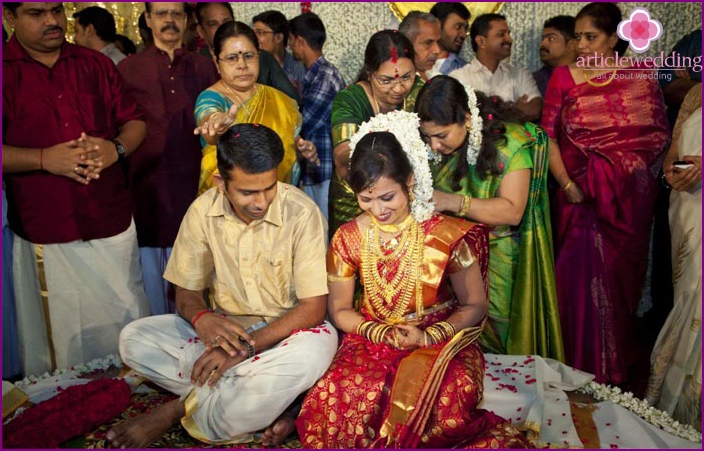 If the future wife and husband are citizens of the Russian Federation, then it is possible to register marriage by the official authorities of India if:

In the case when one of the spouses is a citizen of India, a marriage concluded in a court of the country will be recognized as valid on the territory of the Russian Federation under the following conditions:

An unusual, magnificent wedding procession with many traditional rites is a hallmark of the Hindus. Expensive outfits - saris, chervans embroidered with a golden pose - an integral part of the ceremony. As well as jewelry for the bride, rich decoration of the premises, decor with magnificent garlands of flowers. The main part of the wedding ritual is represented by the following points:

At the end of the wedding ceremony, you will receive a certificate confirming that according to the Hindu religion you have become spouses. Some hotels in India offer customers a festive fireworks display in honor of the newlyweds. An unusually bright, extravagant wedding will forever remain in your heart, as a memory of a happy day that connected the hearts and souls of lovers.

Where to have a wedding 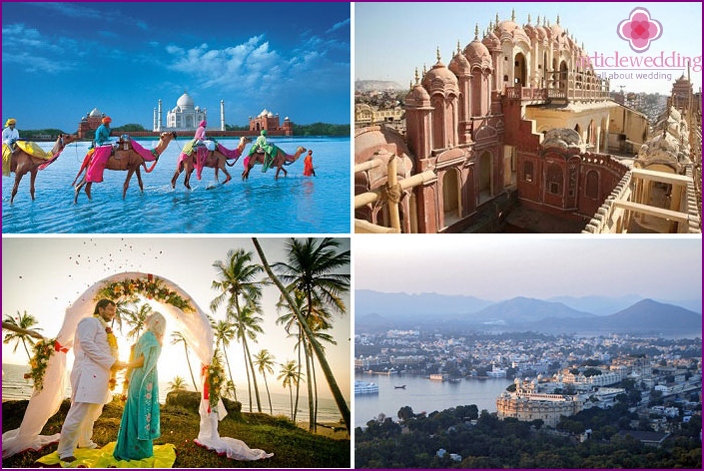 Do you dream to make a sacred union in an ancient Indian temple according to the canons of the Hindu religion? Ancient rites and traditions of Tamil Nadu await lovers. See the impenetrable jungle while traveling on elephants, get to know «The pink city» Jaipur, visit the unrivaled Taj Mahal - a symbol of eternal love - the choice is up to you.

The pearl of India, a wedding mecca for tourists from around the world - Goa. Snow-white beaches, the azure ocean, ancient traditions are at the service of those who wish to hold a wedding ceremony. The traditional tent, the wedding brahmin, the generous gifts of the rich Indian land will leave an unforgettable experience. Most tour operators offer to organize a ceremony based on Indian or European style... 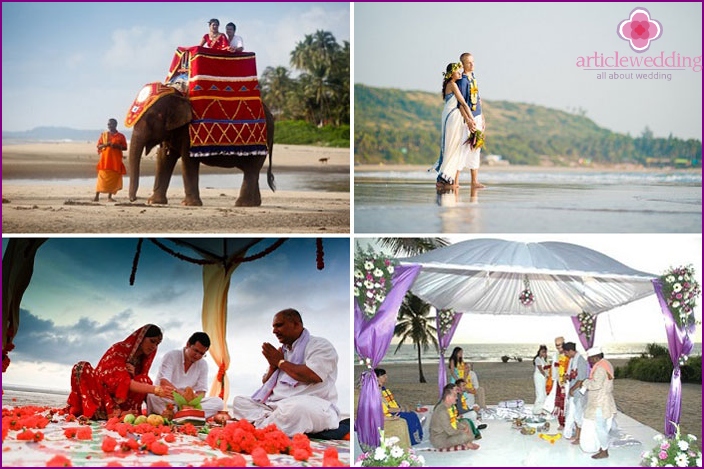 The southern state of Kerala is kilometers of delightful beaches, lakes and tropical tropical nature of India. Dressing a pearl-golden sari (which differs from the traditionally red dress) to the bride and becoming an oriental beauty is nothing more romantic. Wedding night on «houseboat», carried out by lovers will make heart beat faster after many years.

Want to have a quiet, romantic wedding? The state of Tamil Nadu, rich in exquisite architectural treasures, temples and lush, fragrant greens, will present such an opportunity. «The golden city of a thousand temples of India» Kanchipuram has become the haven of three religions: Hinduism, Buddhism and Jainism. Quiet, clean, cozy streets of small resort towns will give an unforgettable experience. 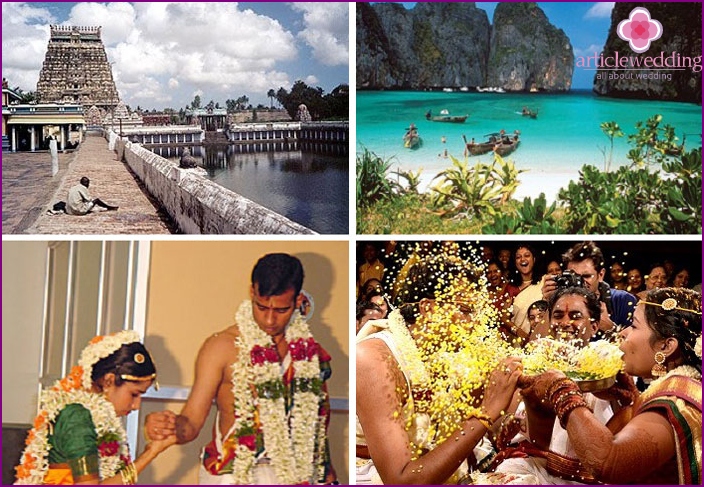 A wedding ceremony of the Maharaja style in the city of the current Maharaja - Jaipur - will be remembered for its richness of colors, vivid impressions. Majestic palaces, ancient temples, on the territory of which it is possible to organize a wedding, will turn lovers into «representatives of the higher caste», for which the whole world is created. Gorgeous outfits, lush apartments, rich refreshments - at the service of those who wish to organize a wedding ceremony in Jaipur.

In the midst of arid Rajstan, at the confluence of three lakes, Maharaja Uday Singh founded «snow-white city of India» - Udaipur The ancient architecture of the palaces, green parks, numerous hotels and ... the magnificent expanse of water rightfully assigned a second name to this city - Eastern Venice. Amazing photos of the wedding ceremony, boat trip to the Pihkol Palace will be a happy start to your family life, giving an unforgettable experience.

The contrast of the big metropolis, the fusion of religions and cultures, ancient rites and symbols are intricately intertwined in the capital of India - Delhi. Most residents of large cities choose «love wedding», gradually moving away from the customs of their ancestors. However, the legacy of generations is so great that marriage is impossible without «classic» for India the garments of the newlyweds, the brahmana and the fundamental ceremonies.

To hold a wedding ceremony in one of the wonders of the world built in Agra as a sign of recognition of unfading feelings - the Taj Mahal - any bride dreams of such a gift. Snow-white marble, aerial architecture, exquisite patterns and stucco molding - from the splendor of what he saw, blinds his eyes and captures the spirit. Walk with your spouse on the ancient plates barefoot, absorbing energy and the all-conquering power of love. Leave recognition on the steps of the temple, because the ancient legend of India says that then your feelings will be as strong as the great love of the great Shah.

How much is a wedding ceremony in India

The cost of wedding services provided by travel agencies ranges from 350 to 1,500 dollars. The package includes the organization of a ceremony in India, pre-wedding events, the provision of rental clothing, music, transportation services and much more. The price of a wedding tour lasting three days is about $ 2000 per person.

How to combine ancient customs, traditions of ancestors and modern views of the younger generation? Holding wedding ceremonies in major cities of India in a different way reveals the life of the current country. The main difference between advanced youth was the desire to create a family for love, and not the conspiracy of parents. A classic Hindu-style wedding and ... a cheerful, joyful wedding banquet with many guests, dancing, gourmet European-style cuisine - these are the modern traditions of India. You can see a bright, unusual wedding by watching our video:

Amazing architecture, ancient temples of India, majestic palaces of the Maharajas will be a magnificent setting for an unforgettable photo and video shooting of the newlyweds. Capture the wedding ceremony, elephant rides or a visit to the Taj Mahal. A detailed photo report about the mehndi ritual, dressing and preparing for the wedding will bring memories to life, recalling the love that united the hearts of lovers, after many years. You can see the ideas for the wedding photo shoot in the photo below..

Dilemma: Which wedding scenario to choose?