The average cost of a wedding dress in the United States is $ 1200, but this does not mean that the world does not produce a huge number of dresses, the price of which is tens and hundreds of times higher than this figure. Below are the ten most expensive wedding dresses in the world, designed by famous designers. Their cost varies from 50 thousand to 12 000 000 $.

Top 10 most expensive wedding dresses in the world

The most expensive wedding dress in the world is a joint creation of fashion designer Rene Strauss and jeweler Martin Katz. This masterpiece was shown to the public in February 2006 at a Los Angeles wedding costume show. The dress was sewn in one piece, and, despite its beauty and originality, no one has bought it yet. 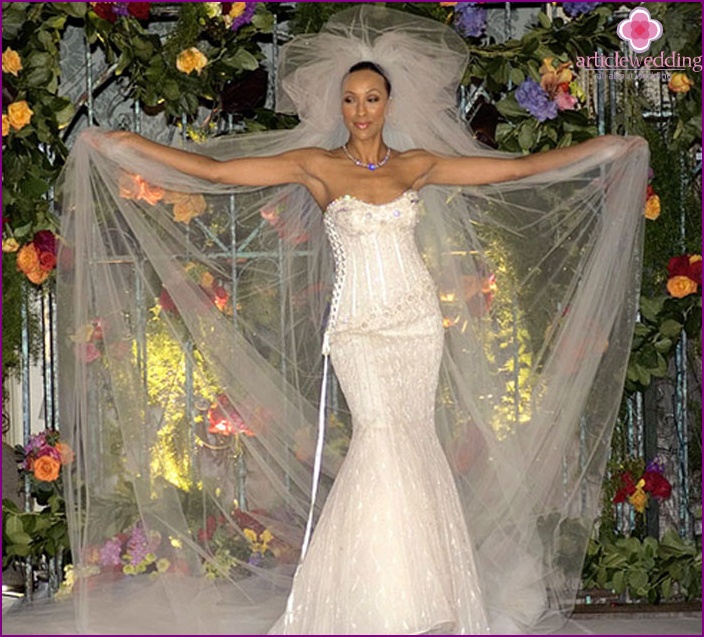 Tight fit emphasizes the figure of the bride, so a dress will look good only on a girl with perfect proportions - magnificent breasts and a narrow waist. The open bodice of this model is generously decorated with white diamonds of the same size, which provided a wedding dress with such a high price - $ 12,000,000. The outfit is recognized as the most expensive in the history of fashion.

Luxurious wedding dress from the world famous Japanese fashion designer Yumi Katsura took the second place in terms of high cost. A wedding dress, the price of which is $ 8,500,000, is strewn with exactly a thousand pure pearls. The designer also used green and gold diamonds as jewelry. A bold form of wedding attire designed for fans of short dresses and doll style. 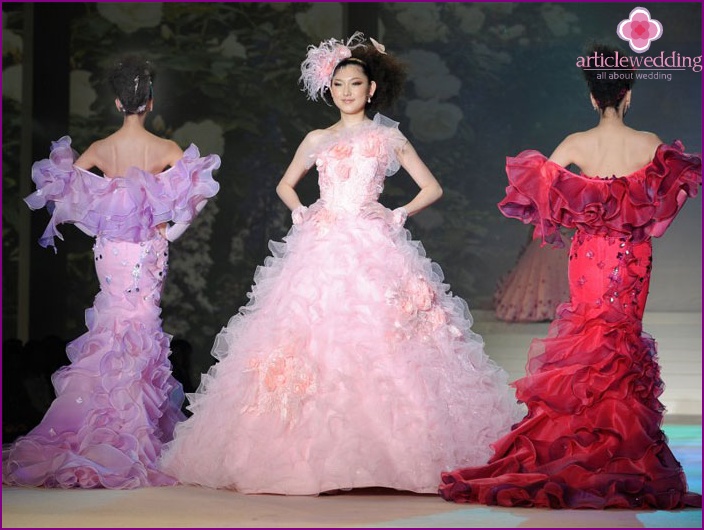 In 2000, a model of a wedding dress from British fashion designer Maria Grahfogel became a real revelation to the fashion world. The dress was one of the first truly chic outfits of modern fashion. He was introduced by the famous model Jody Kidd. Moreover, according to the conditions of insurance, she could wear a dress only in «safe» places that were previously determined by the organizers of shows and photography. Immediately after the model took off the precious outfit, he was taken away for storage in a safe.. 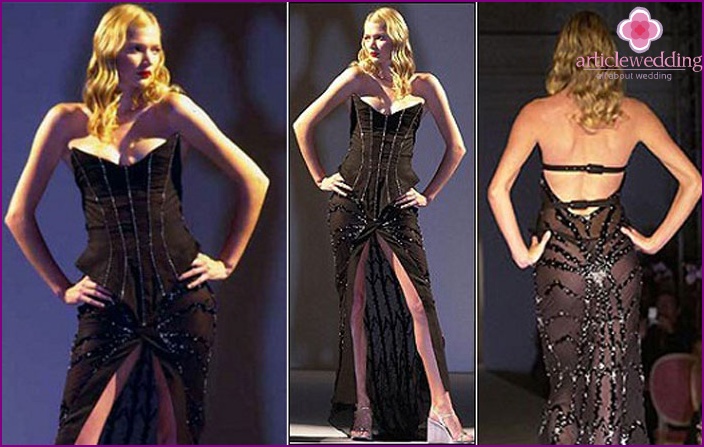 The black wedding dress on the front has a piquant cut to the hip, and on the back it is decorated with a fishtail-shaped skirt falling to the floor. A silk corset is studded with 2000 diamonds. The starting price that was assigned for this outfit was $ 500,000, but was subsequently sold for $ 1,800,000.

Hollywood star Katherine Zeta-Jones was an irresistible bride at a wedding with Michael Douglas. The future husband presented his beloved wedding dress, created by Christian Lacroix. A wedding outfit cost Douglas $ 1,500,000. The audience was fascinated and discussed for a long time a long snow-white robe with a magical train, which was on the actress on the day of the wedding ceremony. 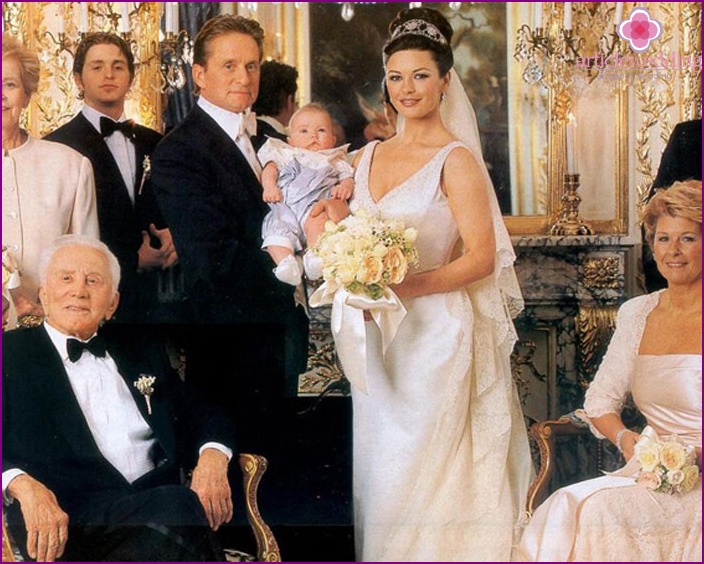 The American brand sewed an expensive wedding dress for an anonymous customer. As it turned out, it was created for a 23-year-old bride from the UAE. The outfit was sewn to order in an exclusive copy. For this purpose, 45 meters of organza were used, and as a decoration, the robe was strewn with 1,100 diamonds weighing three hundred carats and 3,000 Swarovski crystals (these are special crystal stones with 12-sided cut that imitate diamonds). The price of the product was $ 300,000. 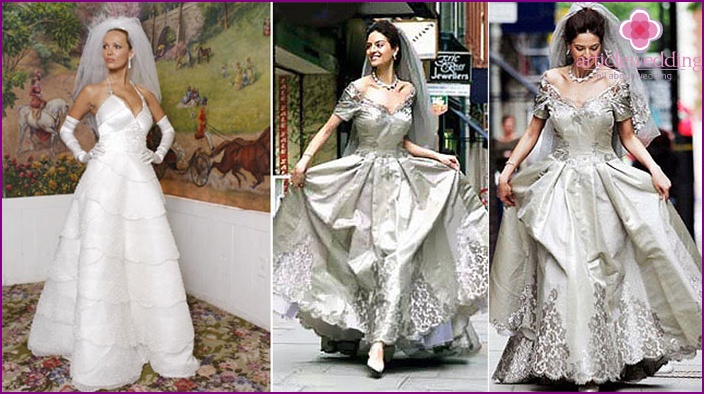 Presented at the Bunka Fashion college (Tokyo) fashion show by jeweler Ginza Tanaka, the wedding dress is adorned with 15,000 Australian gold coins. The costume weighs ten kilograms and costs more than $ 250,000. Other «gold» models, for example, jackets that weighed even more - about 15 kg. The talented Japanese surprised the audience with magnificent and extravagant outfits of gold. 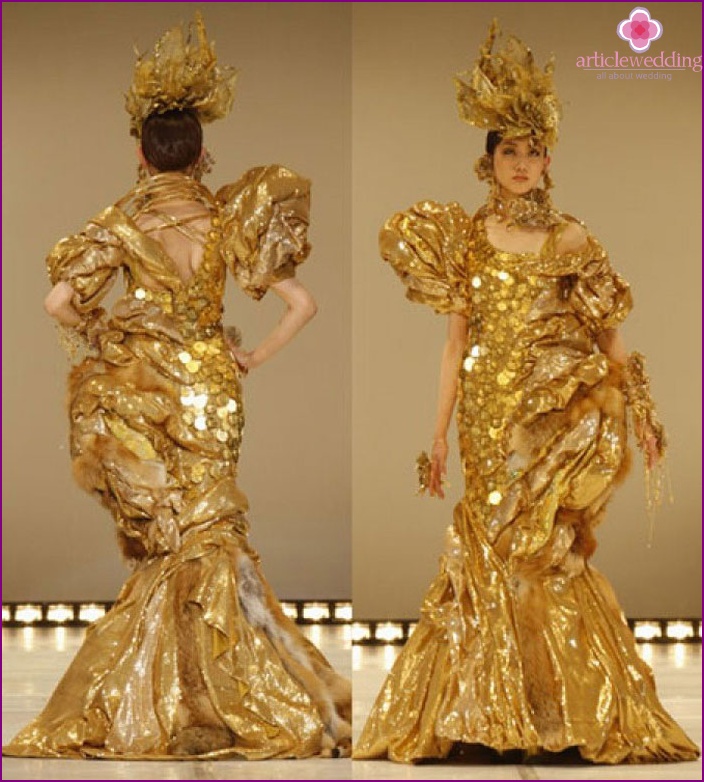 The price of each work of Christian Dior, presented in 2007 at the Fashion Week show, was not lower than $ 200,000. One dress was bought immediately after the show. Luxurious wedding dresses made of multi-colored fabrics literally riveted the eyes of all those gathered. After the collection was released, these original wedding dresses were at the epicenter of discussions of fashion critics for a long time.. 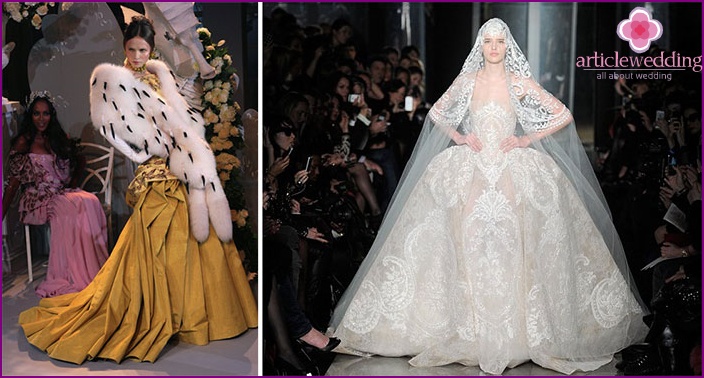 $ 200,000 paid for a wedding dress from Dior by model Melanie Krauss. In the spring of 2005, she married Donald Trump. The girl for a long time picked up a dress for the wedding ceremony with the famous billionaire and settled on the beautiful model of the Christian Dior Couture collection. Handmade satin robes required 90 m of fabric.. 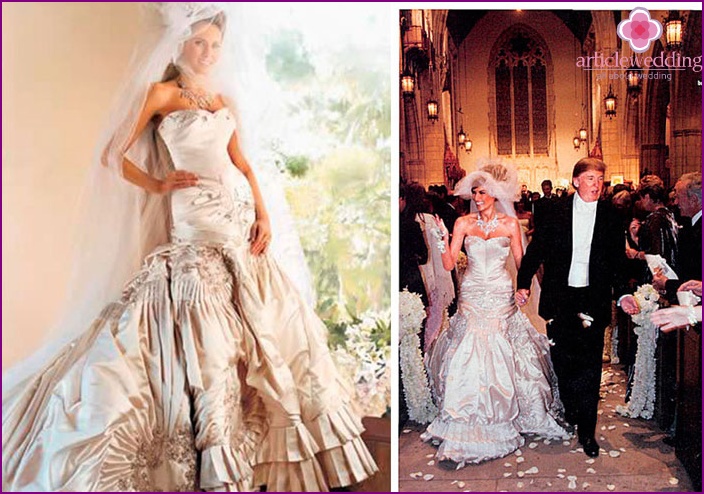 The open top contrasted well with the voluminous bottom, and the hem of the wedding suit and a chic air train attracted the enthusiastic looks of the guests to the bride. The bodice was decorated with silver - this made the thing so heavy that the model demonstrating the wedding dress literally fell under such a load. However, Melanie was able to reach the altar without incident..

In 2005, Christian Lacroix presented to the public a chic cream-colored wedding dress decorated with gold accents, and a crown with natural pearls replaced the veil. The chiffon outfit exceeded all expectations of the fashion world. A magical wedding dress deserves the title of a work of art. Until now, millions of girls around the world dream of him. The cost of a wedding suit is estimated at $ 150,000. 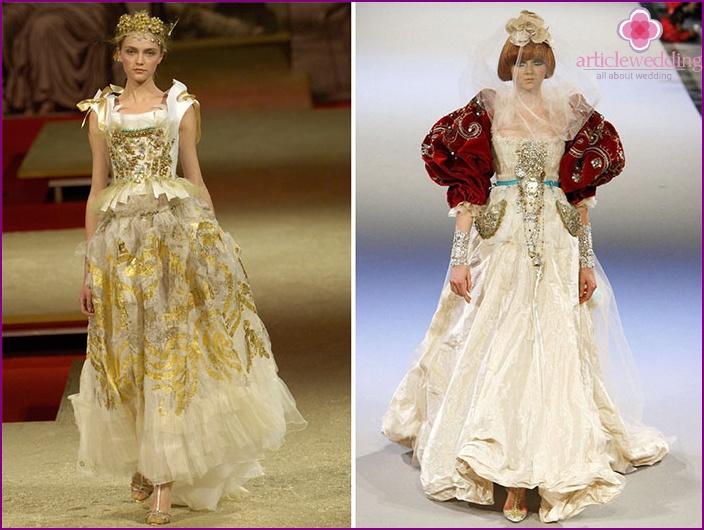 At her wedding in 2001, Jay Law was in a beautiful dress for $ 50,000. The author of the outfit was the eminent Italian couturier Valentino. At the time of the wedding ceremony, this dress was among the most expensive ever created. Then the stars were just starting to compete at the cost of wedding dresses. And the Lopez dress was declared the leader. 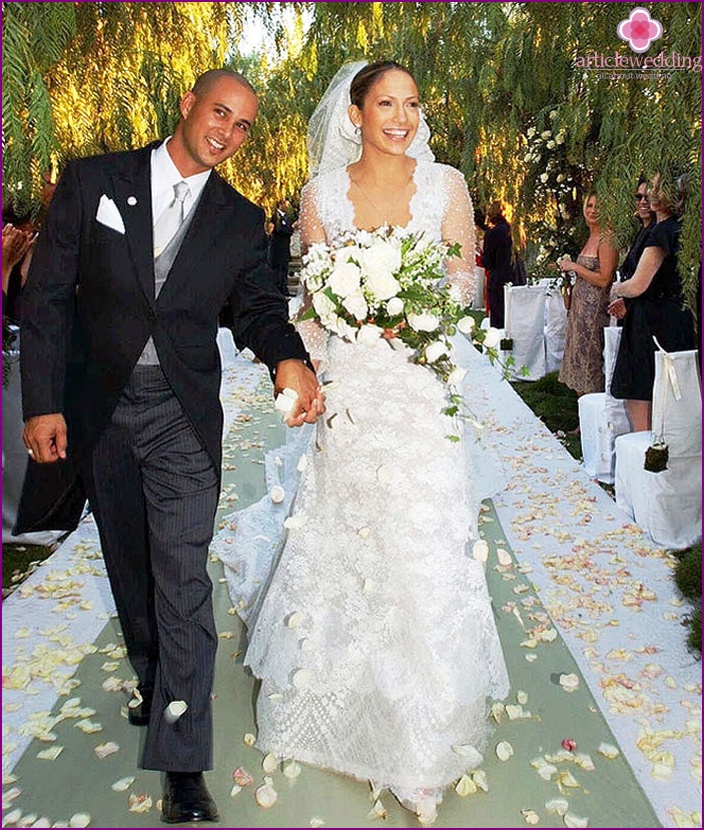 Translucent sleeves, an open neckline, a figure-fitting silhouette, a light veil - in a pale white dress, the bride was beautiful. Twelve years later, the wedding attire of a Latin American singer has not lost its relevance. Many girls still order wedding dresses of a similar style. And not in vain, because the universal cut is suitable for any figure, making the bride delightfully beautiful.

Photos of the most expensive dresses in the world in 2015

Any wedding outfit presented by a famous fashion house will have a high price. However, the famous name of the fashion designer is not the only thing that affects the formation of prices. The high cost of wedding dresses is justified by the presence of original jewelry: Swarovski crystals, lace, precious stones. Dear translucent lightweight materials, sophisticated exclusive cut, author's design determine such a high price for the most luxurious wedding dresses, photos of which you can see below. 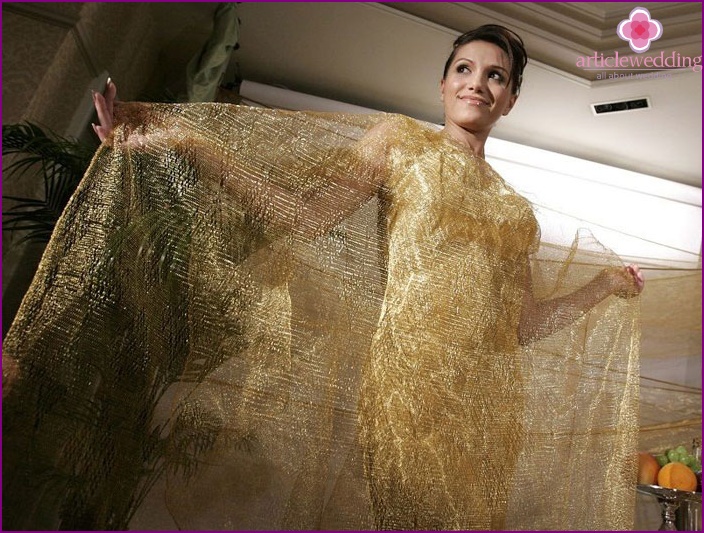 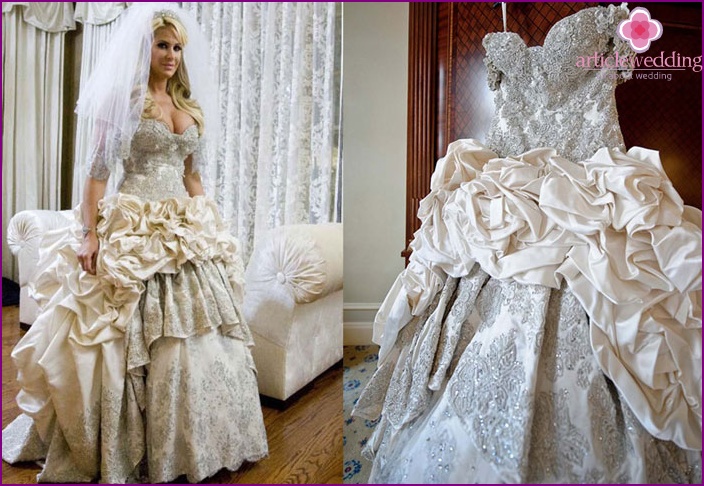 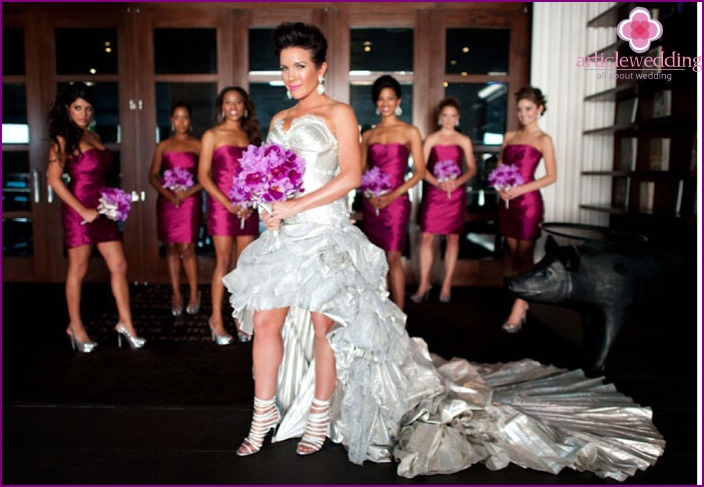 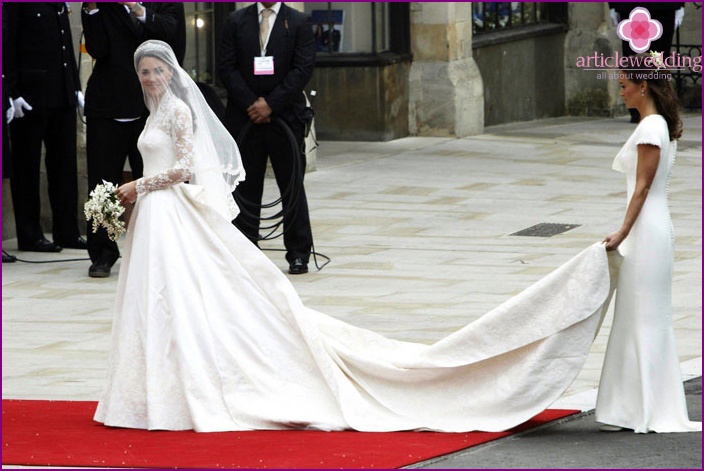 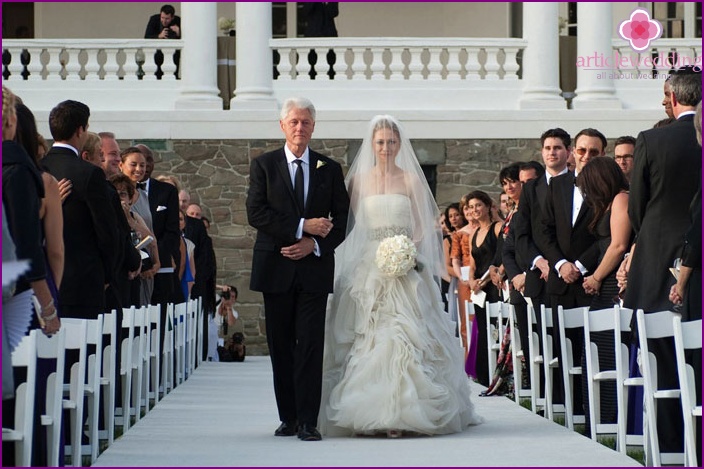 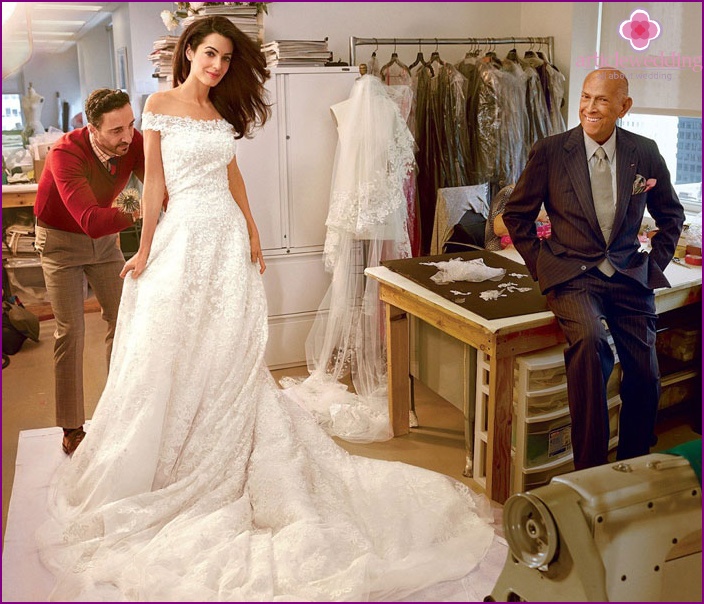 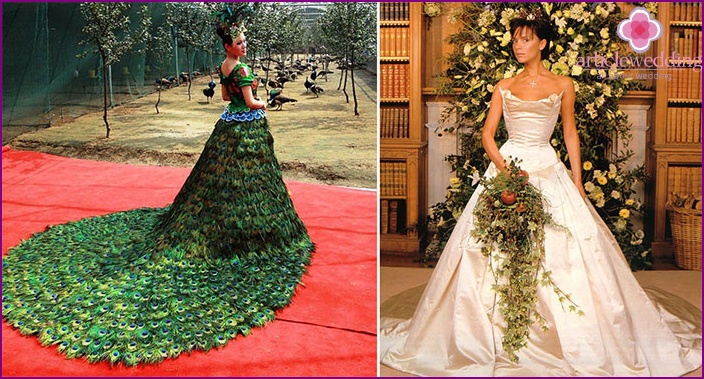 Underwear for the bride - what to ...