Wedding dresses from films and TV shows: photos and ideas for the image of the bride

A wedding is always a special day that should forever remain in your memory a pleasant memory. Therefore, every bride dreams of choosing the perfect image for herself so that she looks truly magical at her celebration. Princesses from fairy tales became the heroines of films, and their wedding dresses became an inspiration for us. 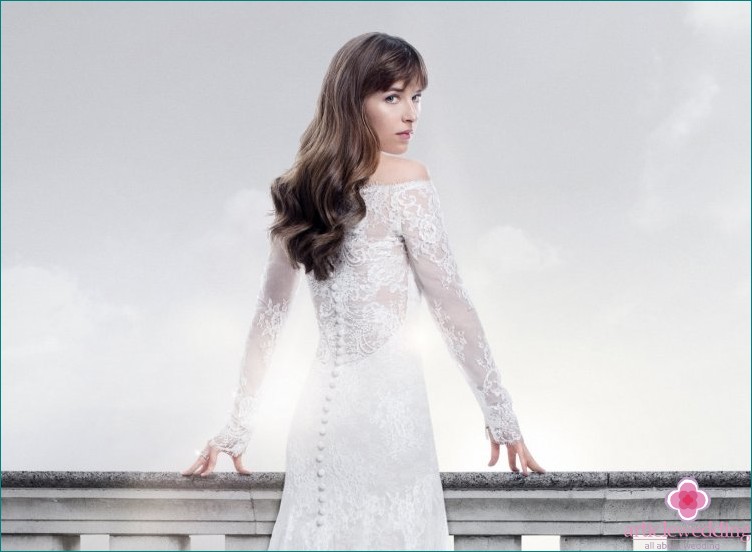 Portal Svadebka.ws has collected for you the top of the most luxurious, memorable and exclusive wedding dresses that we have seen on large screens. The heroines of our beloved films in their gorgeous images of brides will inspire you to find your beautiful dream dress.

In 2018, the final part of the sensational saga was released «Fifty Shades of Freedom». The culmination was the long-awaited event by all viewers - the wedding of the main characters. That is why, speaking about the most iconic wedding dresses from films, it is impossible to miss a photo of Dakota Johnson in the image of a bride. Her outfit by Monique Lhuiliier has become truly iconic.. 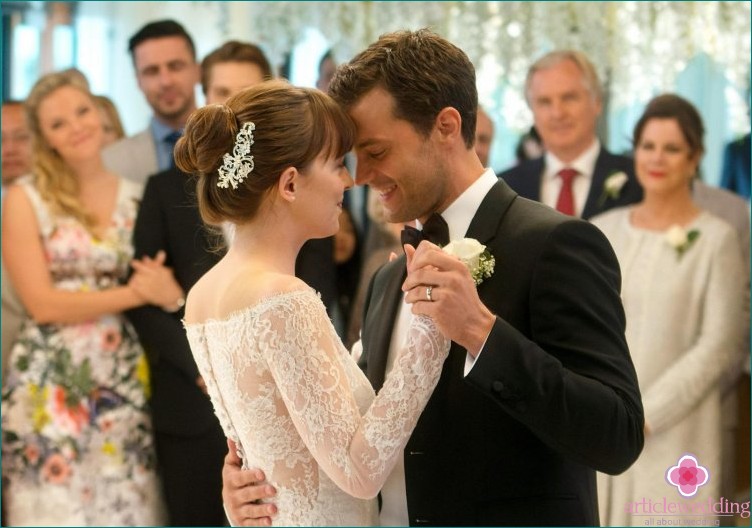 The heroine's dress is both feminine and exciting. A long train and sleeves add modesty, lace makes it lighter and more delicate, and open shoulders emphasize sexuality. The dress fits perfectly on the heroine of Dakota, and his style emphasized the figure, emphasizing all the advantages. 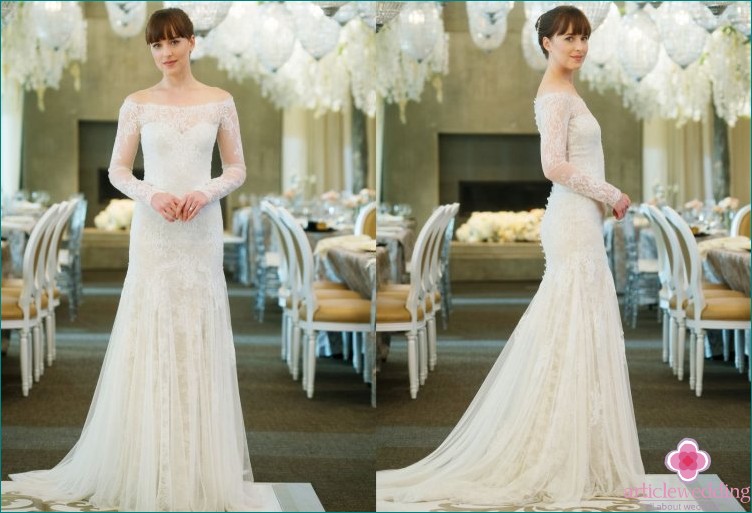 Russian melodrama «8 first dates» presented us an unusual wedding dress from the movie. The image of Oksana Akinshina conveys the tenderness and modesty of the bride. The style of the wedding dress is minimalism. No extra details. All this gives special sophistication, style and harmony to the image of the bride.. 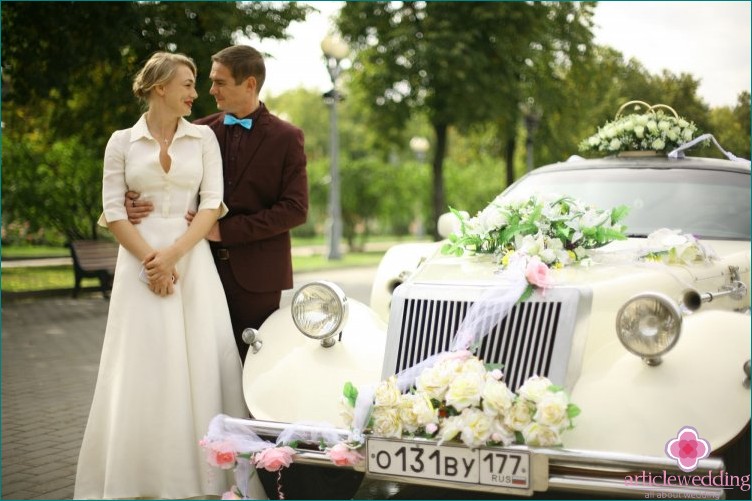 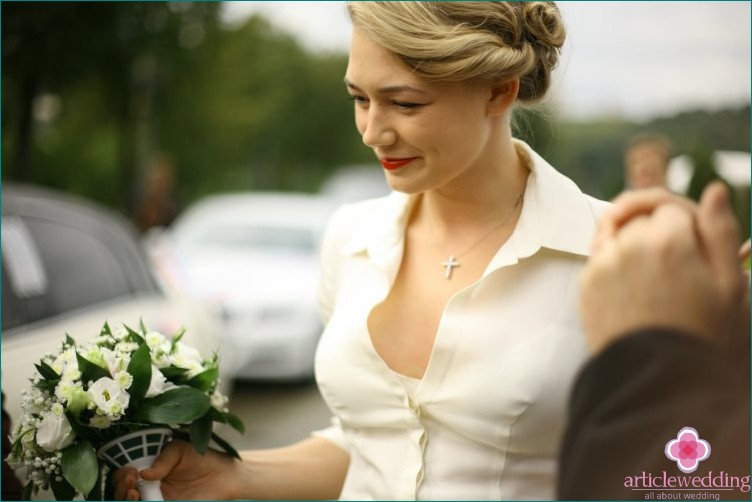 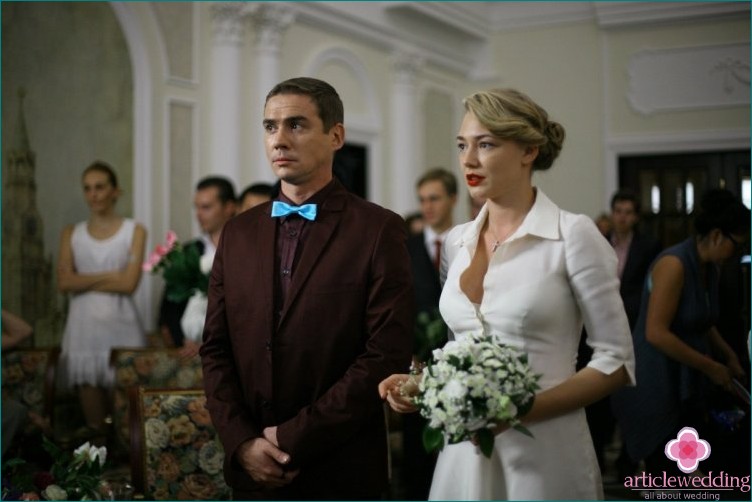 Wedding dress from the movie «The Hunger Games: Catching Fire»

Wedding dress from the movie «The Hunger Games» deservedly falls into our list. The outfit of the heroine Jennifer Lawrence became the most unforgettable in the whole picture. Designers worked hard to make the dress look luxurious and avant-garde, decorating it with Swarovski crystals. The unusually bold bottom consists of numerous layers of chiffon, which makes it also gentle and light.. 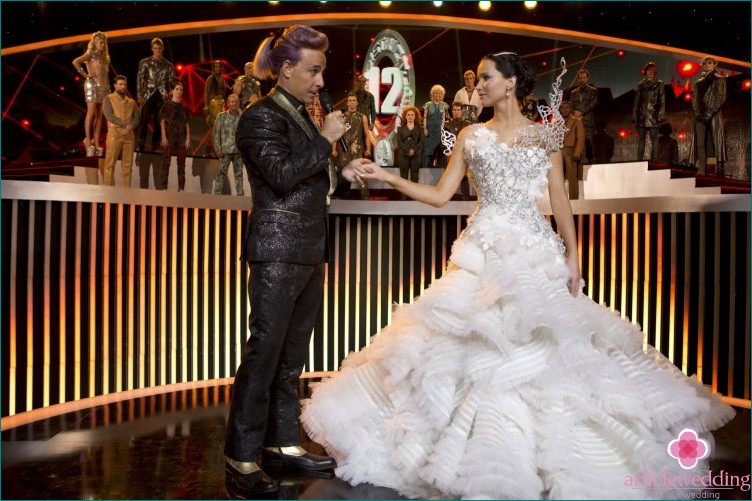 Wedding dress from the movie «War of brides»

Bright well-known comedy presented us with two stunning dresses from the famous designer Vera Wang. The outfits are as different and unique as the heroines themselves. The first wedding dress from the movie «War of brides» presented by the stunning actress Anne Hathaway. Satin outfit looks very elegant, aesthetically pleasing and sexy. Open shoulders make the image fatal. Dress «Fish» perfect for the bride. The fabric flows along the figure, emphasizing it. 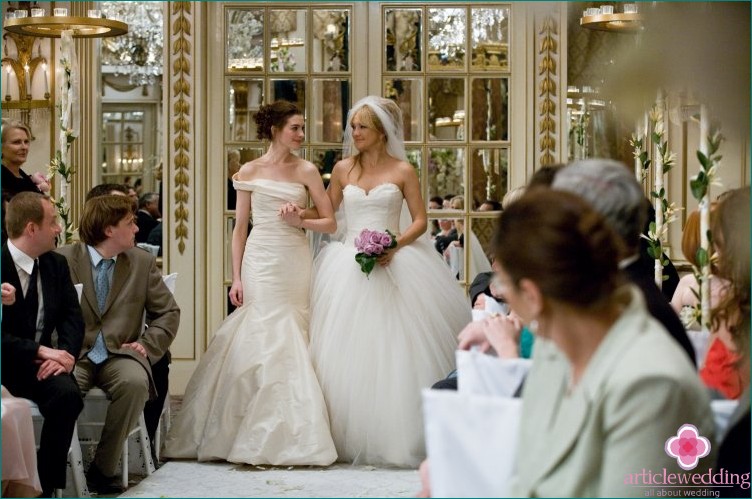 The audience saw the completely opposite style of the wedding dress on the charming Kate Hudson, who appeared before us in the image of a tender and romantic bride. Light and airy multilayer tulle belted with velvet ribbon - this silhouette has become trendy with the release of the film and still does not lose its popularity. 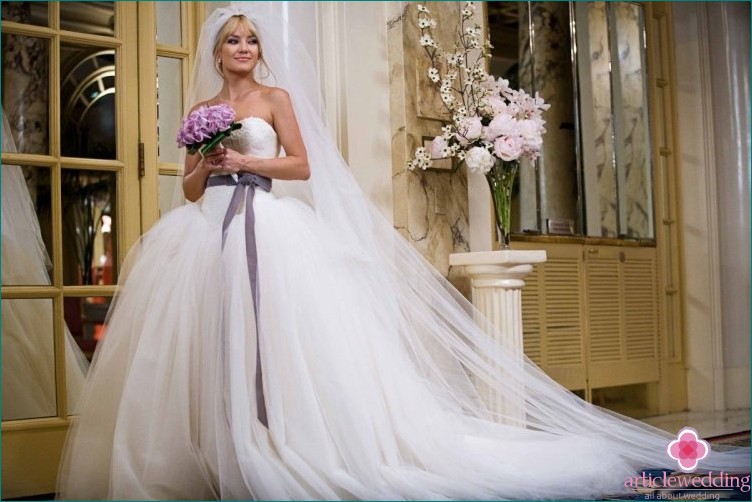 The wedding image in the film «Dusk. Saga. Dawn»

The most anticipated end of the famous vampire saga was the wedding of the main characters. Wedding dress from the movie «Dusk» justifiably conquered the hearts of many brides. Kristen Stewart appeared in a stunning outfit from the famous designer Carolina Herrera. A modest laconic satin dress was complemented by a translucent embroidery with an elegant row of buttons on the back, which perfectly balanced the silhouette and gave it sophistication. 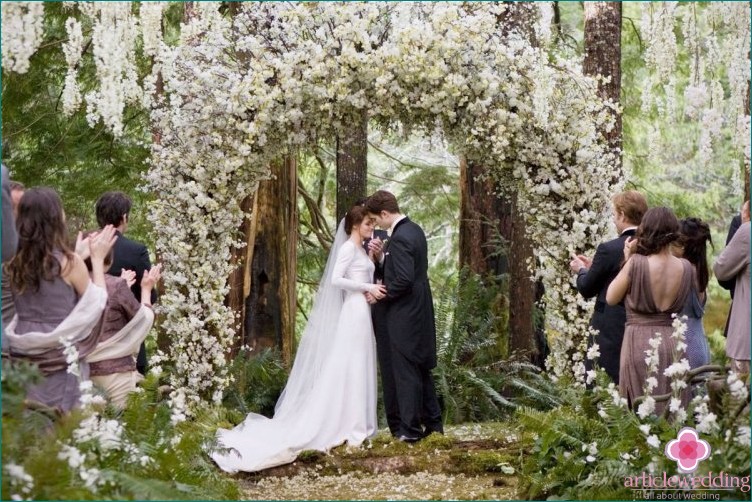 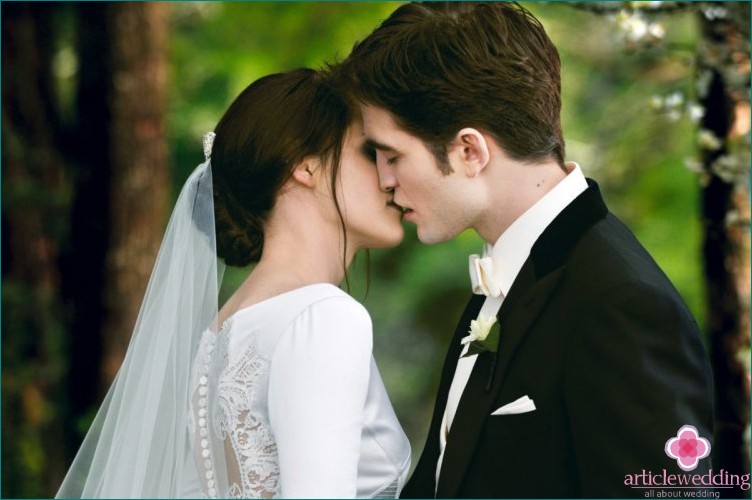 Wedding dress from the movie «Melancholy»

Wedding dresses from films often set the tone for the upcoming wedding season. But in the fashion world there is a place for timeless classics. It was in such a dress that the actress Kirsten Dunst appeared to the public. Her image of the bride is very delicate, the outfit is decorated with flowers with notes of Baroque style, a deep neckline and a veil embroidered with flowers. The dress, over which a whole team of specialists worked, turned out truly «American». The image of Kirsten is very romantic, touching and gentle.. 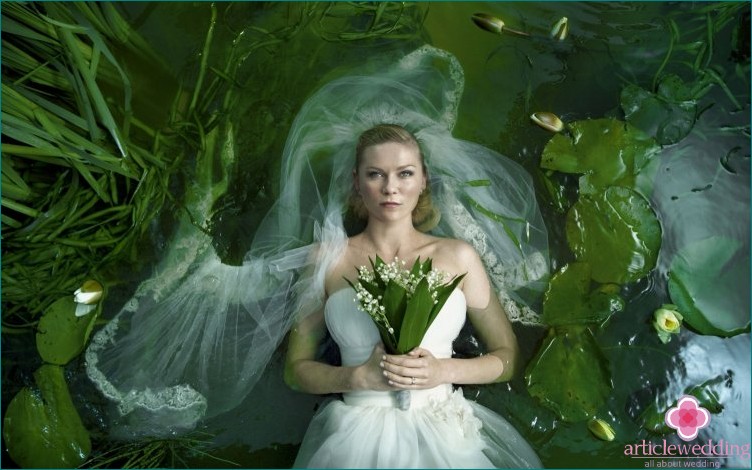 In a wonderful romantic musical «Mom mia!» A delightful greek-style dress is presented. The image of Amanda Seyfred is incredibly gentle, cute and natural, which is very important for modern weddings in the style of «Rustic», «Boho» or «Eco». 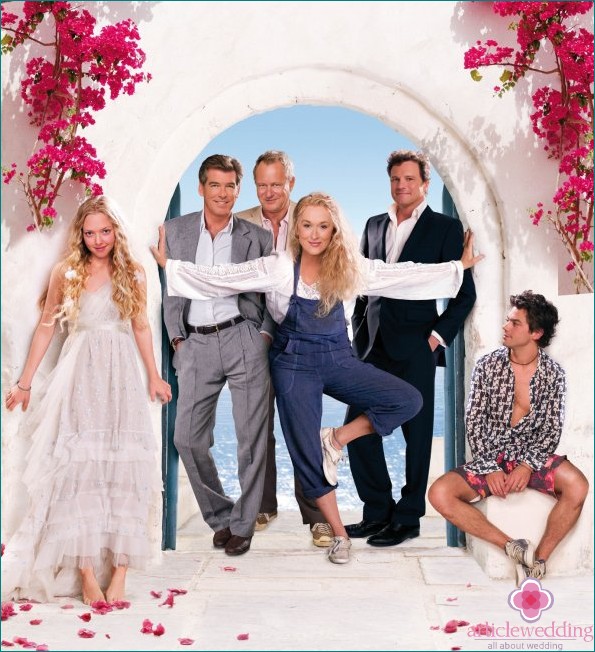 Wedding dress in the series «Beverly Hills: The New Generation»

Speaking about the most beautiful dresses from the screens, one cannot but mention the heroines of our favorite series. It is they who often demonstrate the best brands of wedding dresses that come into fashion for a long time. One of the striking examples is Anna Lynn McCord in the series «Beverly Hills: The New Generation». On it we see a beautiful sophisticated dress of a straight cut with a long train. All elements of the outfit merge into the image and complement it, making it even more interesting and luxurious.. 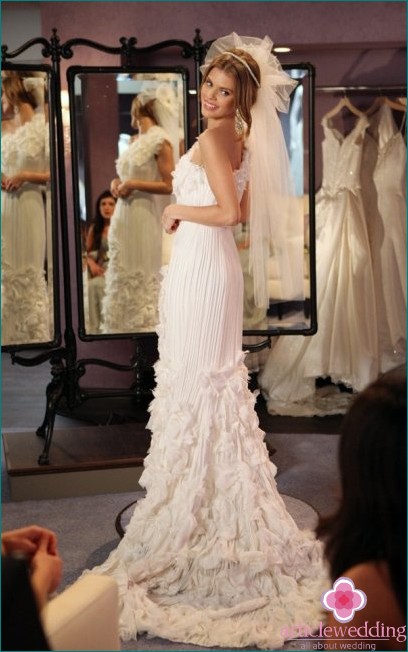 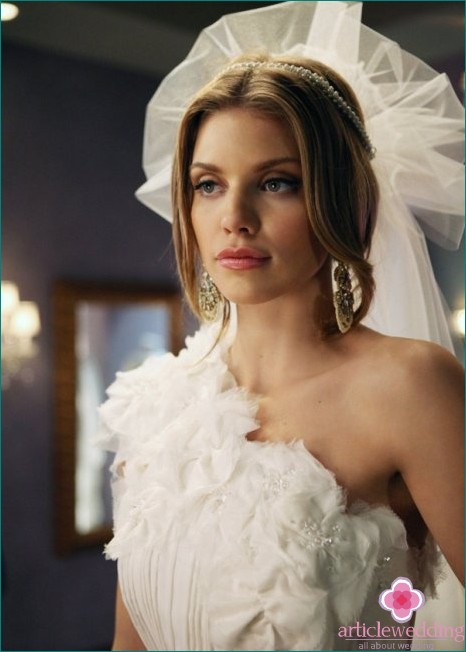 Wedding images in the series «Gossip»

Famous series «Gossip» gives us not one, but just three luxurious wedding dresses. The heroine, played by Leighton Mister in the series, got married twice. For the first time, she appeared in a luxurious and airy dress with a long train from Vera Wang. The next time we saw her in a delightful dress of a straight cut, decorated with excellent lace delicate blue color from Elie Saab. 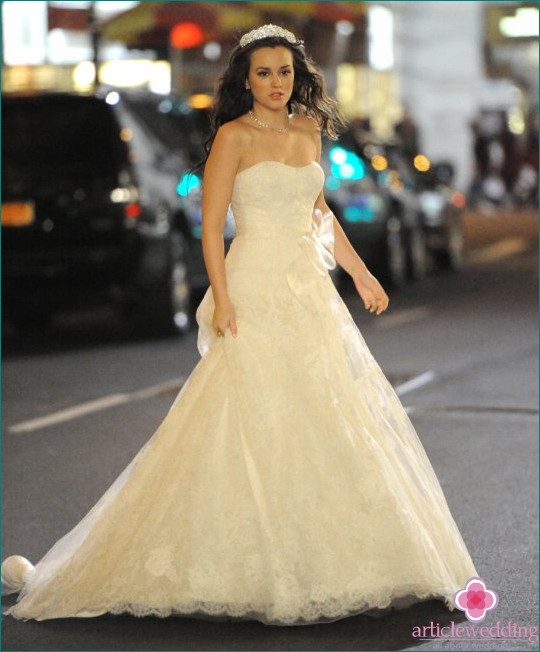 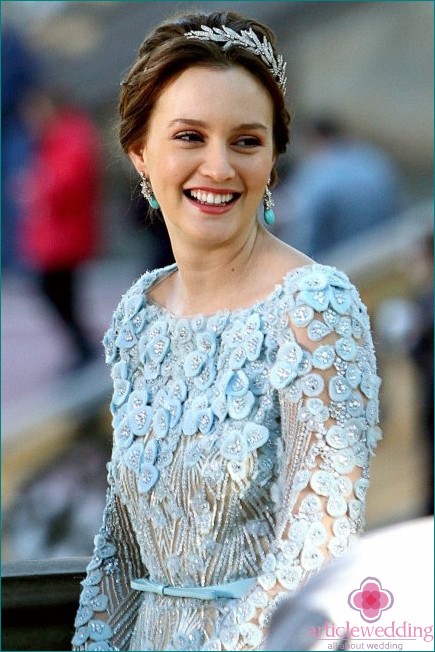 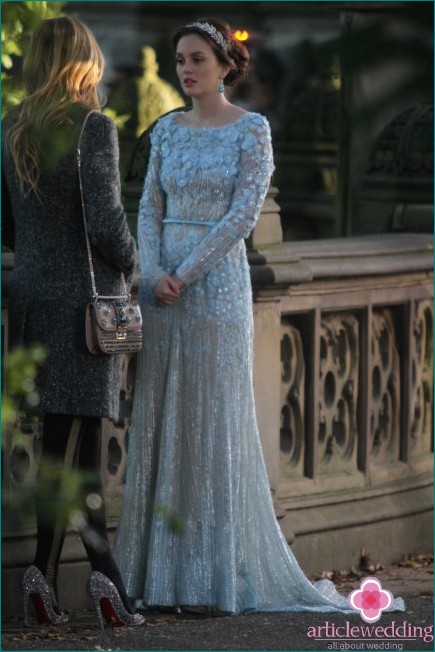 No less memorable was the Blake Lively wedding dress from the famous designer Georges Chakra, which captivated everyone. The gold outfit not only ideally suited the heroine of the series, but also made her look truly chic and inspiring. 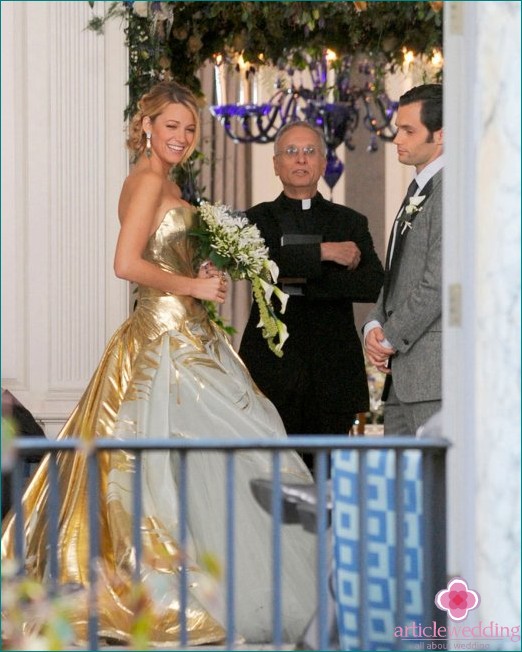 The portal told you about the most vivid and memorable most beautiful wedding dresses in Russian and foreign films. All the heroines and their outfits are so different that, looking at this selection, each bride will be able to choose the right dress and facilitate this difficult choice for herself. Get inspired and create your dream image.!