The dress of the bride of Ossetia deserves special attention. It is unique in its grace and beauty. Ossetian wedding attire is decorated with a variety of stones, embroidery. This decor makes the outfit heavy and luxurious at the same time. The outfit hides from the prying eyes the body of a young girl, including her arms and neck. The bride’s headdress, decorated with gold and silver threads, framed by a veil, plays an important role. This accessory is a ransom item during an Ossetian wedding. In ancient times, it was considered a bad omen if a hat fell into the hands of a stranger.

What does the Ossetian national wedding attire consist of??

Elements of the bride’s wedding dress are corset, shirt, swinging dress, caftan, veil, hat, shoes. The girl began to wear a caftan from the moment she entered marriageable age. He wore over a shirt under a swing dress. If possible, a caftan was made of expensive fabrics such as satin, velvet, silk. This garment pulled the figure, starting with the shoulders and ending with the waist. He had to pull tight, otherwise chest fasteners could be unfastened. The sides, gates, hem of the caftan are decorated with gold embroidery, galloon. 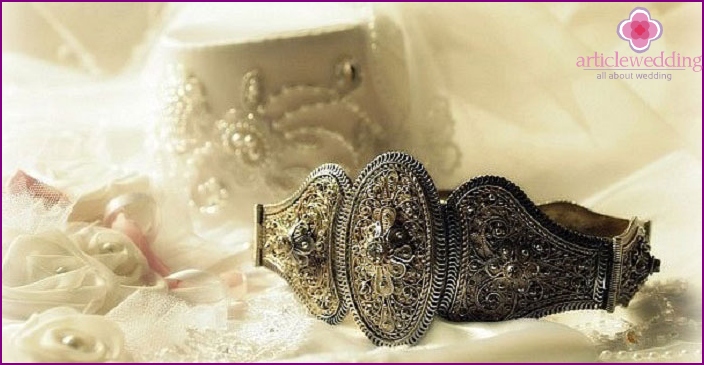 Under the swinging dress, only some parts of the caftan were visible, it fell apart into arm ruffles, lower shelves on the belt, a collar, a bib with fasteners. Under him, the bride and groom put on a shirt of chintz or silk with wide long sleeves that hid the hands. The color of this item of the girl’s wedding clothes was yellow or red..

A mandatory element of a women's wedding dress are chest fasteners. If initially they fulfilled their direct mission, then in modern times they have become more of a decorative part. Chest clasps are present in all festive women's costumes of the North Caucasus, but they were found in funeral complexes of Ossetia.

Under a caftan, a corset is put on a shirt. The material for it is leather or several layers of silk. The top of the corset ends at the armpits, and the bottom at the waist or slightly lower. Ties on a corset are small knots of a cord or braid. Some canons of the Ossetian wedding are associated with them: it was forbidden to use anything sharp to untie the cord. If he was torn or cut, for a man it was considered a shame. If, on the first wedding night, a man could not untie a corset, then he had no right to touch the young. 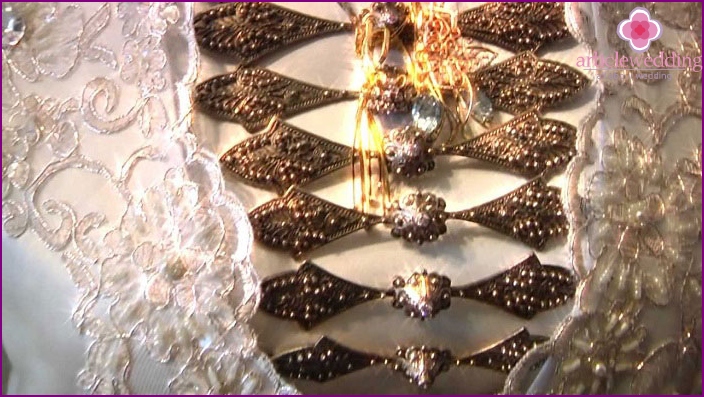 Over the caftan they put on a swing dress. Often it is made in bright colors. A feature of a wedding dress is a hanging wide sleeve. It is characteristic not only for festive clothes, but also for the garment of feudal lords. Such sleeves were uncomfortable during work, therefore, idleness was emphasized: permanent for women of the upper class or short-term at holidays and weddings.

Ossetian wedding dresses are long dresses with flared sleeves. They are worn with a wedding hat of a triangular elongated shape, decorated with a veil. Ossetian wedding attire depicted symbols of nobility, since the woman is the mother, the parent, and therefore the ornaments were of a floral nature. The bride looked slim, beautiful, feminine, modest. 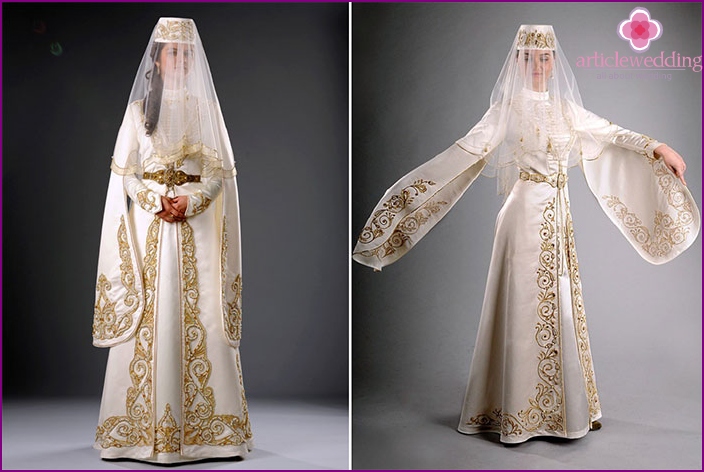 The Ossetian holiday dress reached the heels and cut into the waist. It had a front, solid, deep cut. The sleeves were mostly long and wide. In some cases, they became narrow, straight, beveled at the brush. However, long, wide sleeves were worn on such a sleeve, going down from the elbows. Thanks to the cut in the dress, a silk lower skirt was visible. The cut of the Ossetian bride’s robe reflected the idea of ​​an ancient person about the world: it consists of top, middle and bottom, which in a dress shared a hat, collar and belt.

Ossetian wedding dresses were often sewn by masters using light-colored silk fabrics: cream, white, pink, and blue. The tradition of putting on wedding dresses in white or another light color personifies innocence, purity. It originated in Europe, after which it spread to the whole world. Over time, some parts of the dress lost their symbolism, but the light color of an outfit for an Ossetian wedding remains an unshakable rule.

The value of ornaments 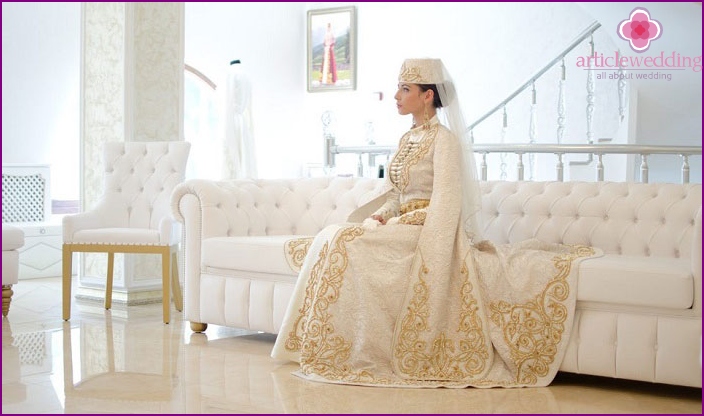 The Ossetian outfit creates a vision of the image of the Pramateri. The ornaments on the suit represent the tree of life. The fabric of the dress itself was considered a barrier to evil spirits, as it underwent a ceremony of weaving magic. A protective ornament was applied in those places where the protective effect of the tissue ended and the human body began. For example, ornaments in the form of an isosceles triangle, the top of which faces the corner of the floor, were applied in the corners of the caftan shelf. Curves diverged from the base of the triangle. Such figures played the role of a talisman, symbolizing fertility..

Functions of a belt and caps in a wedding dress 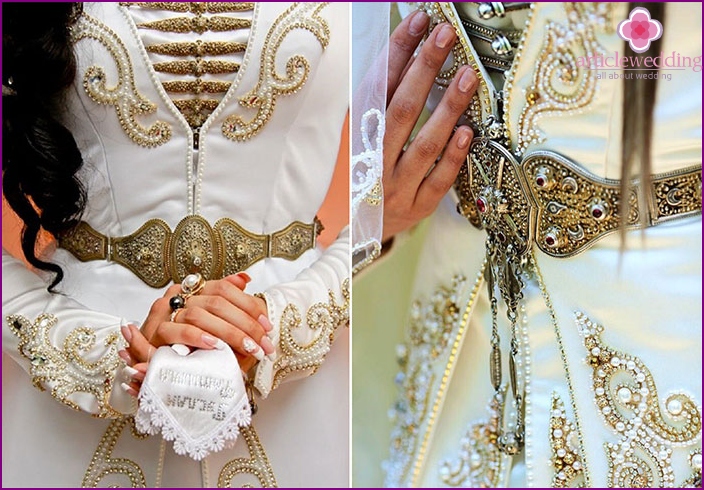 A belt was worn over a swinging dress and worn by the girl from the period when matchmaking was allowed. All such products differed in quality, shape, material, depended on the wealth of the family. Silver belts passed from one generation to another. This accessory protected the bride from evil looks. Caps in the shape of a truncated belt with golden floral embroidery protected from damage, and also symbolized the bride’s high position at the Ossetian wedding.

In the modern age, Ossetians have a choice: to prefer a European wedding dress to traditional Ossetian vestments or not. However, most girls stop on a national costume, whose history goes back hundreds of years. And this choice is quite obvious, because the Ossetian dress with symbols of the sun, fertility, abundance, happiness serves as a talisman. Luxurious gold embroidery, decor with pearls, Swarovski stones on national wedding clothes can not be compared with any modern dress. 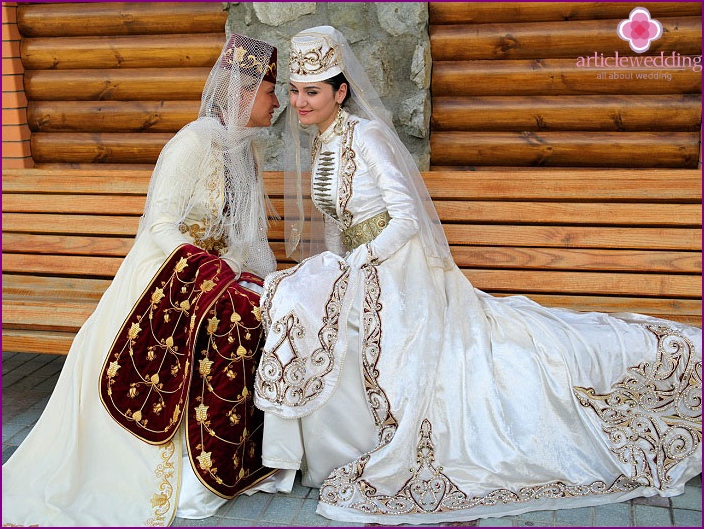 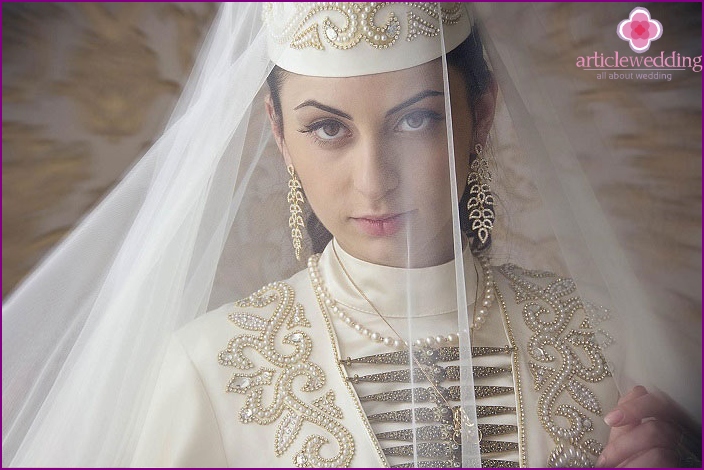