Chinese wedding celebration and upcoming preparations for it have their own characteristics. This is an ancient ritual of reuniting souls of newlyweds in heaven, worship of all gods in the spirit of pagan traditions. A wedding in China is a very peculiar, colorful sight, a sacred sacrament with its traditions, beliefs and signs. So, the white color in the dress of the newlyweds symbolizes mourning and unhappiness, while the red color symbolizes a happy family life.

Wedding celebration in China takes place according to very unusual rituals for us. A special role is given to the foreshadowing of stars, special fortunetelling, the results of which determine the possibility of creating a marriage of a girl with a young man. The modern Chinese wedding has changed a bit: in addition to the traditional red color, there is a white color that is familiar to Europeans in the dresses of the newlyweds and the accessories of the celebration. The Chinese people sacredly believe in the established traditions of the unity of fate of lovers, do not forget folk divination, especially the matchmaking of their ancestors. 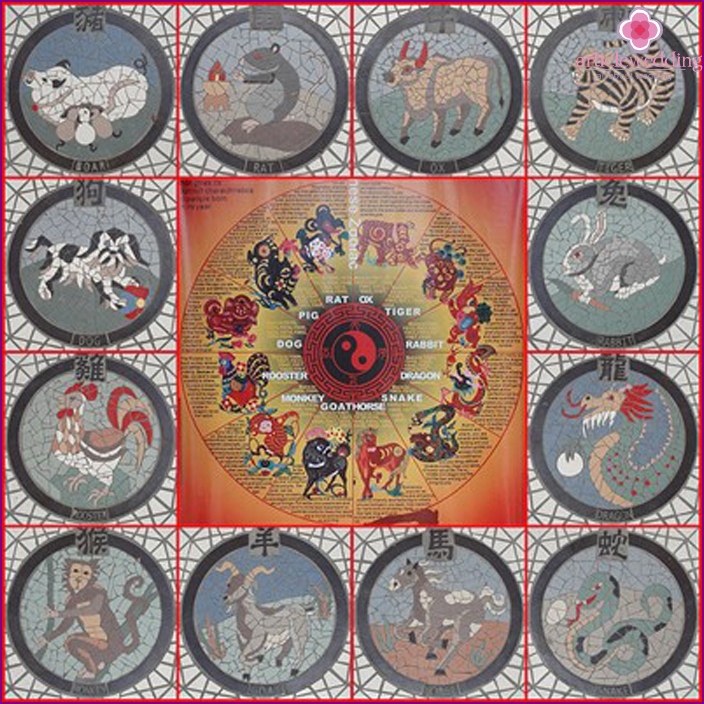 How is matchmaking in China

Matchmaking is an important stage in a Chinese wedding. The main role in creating a future family belonged to the parents of the bride and groom. Between the two families there was an exchange of written notifications about the upcoming matchmaking, the wedding of their children. An envoy from the groom's family presented the bride's parents with a list of favorable dates agreed by the matchmakers. The newlywed couple, together with mom and dad, chose the date of the future wedding.

The ransom of the bride consisted of a certain sum of money, wedding cakes, sweets, wine, chicken, traditional tea «The Dragon» and «Phoenix». The mythical creatures dragon and phoenix personify the male and female principles. Counter-gifts were sent from the bride's side - mainly clothes for all members of the groom's family. If gifts from the bride and groom were received, the groom's relatives were already starting to prepare for a mutually agreed wedding.

Cakes, which were presented by the groom, were handed out to relatives close as a sign of an invitation to a future wedding. The young dowry was a pot with coins and sweets, painted with an ornament. The engagement of two young people could take place even in childhood of a future married couple, that is, 1-2 years before the majority of young people. After that, the wedding date was set.

Preparing for a Chinese wedding

Shortly before leaving for the groom's house, the bride should move from her room to the attic or to another non-residential room. For some period before the wedding, the girl lived with close friends who sang songs about the upcoming separation of her daughter from her parents. The groom, along with his father and mother, arranged the newlyweds' room, they thought over all the stages of the wedding celebration.

On the eve of the wedding, the bride girl took care of her skin, taking a bath with the addition of healing juices of grapefruit, pomelo, a decoction of aromatic herbs. The rite of bathing symbolized the expulsion from the future married life of the influence of evil forces. Then the bride put on a new robe, lit red candles, on which were symbolic images of the phoenix and dragon. A woman with many children, always happy in marriage, curled her hair like a hairstyle of married oriental beauties, blessing her with a happy fate, having children.

After hair styling, the bride went down from the attic, sitting on the back of the same large woman or her older sister. Then the girl put on an outfit, preparing for the upcoming wedding. Red-colored shoes awaited her on a sieve in the middle of the room. Covering her face with a veil, wearing a hat, the bride bowed to the images of her ancestors, parents, according to the wedding traditions of China. Everyone was expecting the arrival of a wedding procession led by the groom and his guests.

The decoration of the bride

The traditional wedding dress of the Chinese bride is a red robe embroidered with rhinestones, decorated with pearls and always with embroidery of dragons and phoenix. Mythical characters symbolized the bride and groom, a man and a woman. The red coat is a family heirloom that is kept by a young family after the wedding. The scarlet color for the wedding dress was not chosen by chance, because it symbolizes mutual love, prosperity, fun.

The bride’s headdress was also red and resembled a crown trimmed with colorful bird feathers, medallions, pompons, and beads. The girl hid her appearance under a dark veil. To show the wealth of the family, traditionally the bride should change her outfit at least three times throughout the wedding. As a rule, at first the girl puts on a white outfit, then puts on orange or pink. Be sure to complete the process of demonstrating models of dresses red traditional attire. 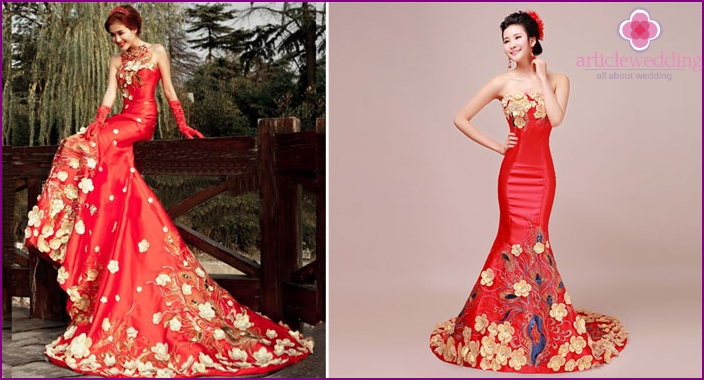 The entire wedding procession was heading to the groom's house. The rite of moving the bride to the groom was accompanied by special rites and magic rituals. The bride rode in a decorated palanquin, which was showered with rice, beans, copper coins as a sign of fertility, prosperity, prosperity. The future wife was not supposed to bring dirt to the groom's house, so before entering the porch of the house a red carpet was necessarily laid. To protect the bride from bad signs of fate, they planted the girl so that she could not see, for example, a cat or a widow on the way to the groom.

It was believed that sparkling fireworks and rattling explosions of crackers accompanying the wedding procession drove away evil spirits and dark forces. According to legend, a mandatory wedding accessory for the bride should be a mirror. The displayed ray of light illuminates her future life path. The mirror guarded the girl at the wedding until the newlyweds sat on the wedding bed. Only after the wedding did the bridegroom have the right to open her narrowed face and see her face in all its glory. 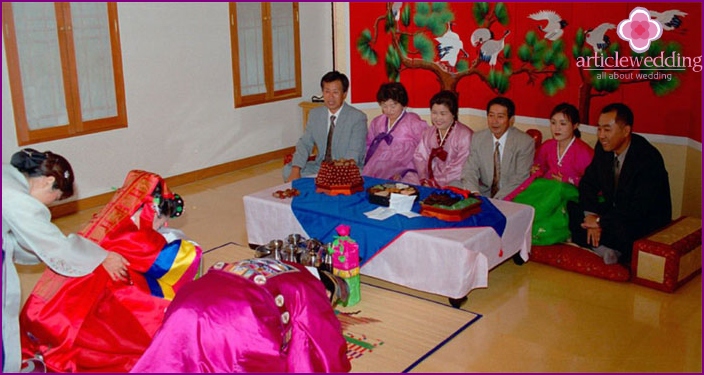 The wedding ceremony was accompanied by ancient Chinese rites. The newlyweds approached the altar - a small table in the yard or house. Here was a sacred ritual of the young - worship of the gods of the earth, sun, sky, moon. Upon completion of the sacred act, marriage was considered concluded and approved in heaven. Then the bride and groom worshiped the elder of the family, parents, relatives and all guests. Friends of the groom gave all participants in the celebration an image of a special character, which means in translation «Double Happiness». This symbol clung to clothes or woven into hair.

The newlyweds, crossing their arms under a scarlet ribbon, drank a cup of red wine. Then followed a plentiful treat of all those invited to the wedding. Having taken seats at the elegantly decorated tables of the banquet hall, guests are preparing for a long official celebration ceremony. The wedding manager invites the newlyweds to the stage. Guests give the bride and groom red envelopes with money or bank cards inside. The newlyweds accepted gifts and bowed honorably to guests.

The congratulatory speeches of the guests followed, the solemn word of the parents of the newlyweds, guests. At the end of the gift ceremony, guests tasted a variety of dishes and drinks. The bride and groom went around all the tables of the guests, inviting those to drink wine or rice vodka for the health of the young. Chinese wedding tradition was missing «European» dessert - a wedding cake. Instead, fruits and sweets flaunted on the tables..

The role of the newlyweds in the midst of the wedding was especially significant. The entire subsequent celebration program depended on the organizational, creative abilities of the groom and the bride. Later, the entertaining part of the wedding was conducted by specially hired entertainers who entertained the guests with interesting contests, games, and karaoke. The Chinese do not dance at the wedding. Young people still have time to change clothes several times, showing guests other traditional outfits.

In preparation for the wedding, the groom had to take care of buying a new bed. According to folk traditions, the newlyweds were accommodated by a married couple who had many children and relatives. After the bed was installed, children were placed on it, thereby symbolizing fertility, future motherhood. The bed was decorated with lotus seeds, a variety of fruits, peanuts. The children tried to try all the goodies on the bed of the newlyweds.. 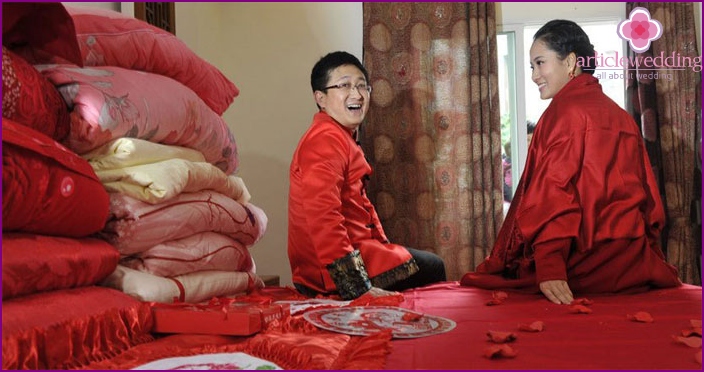 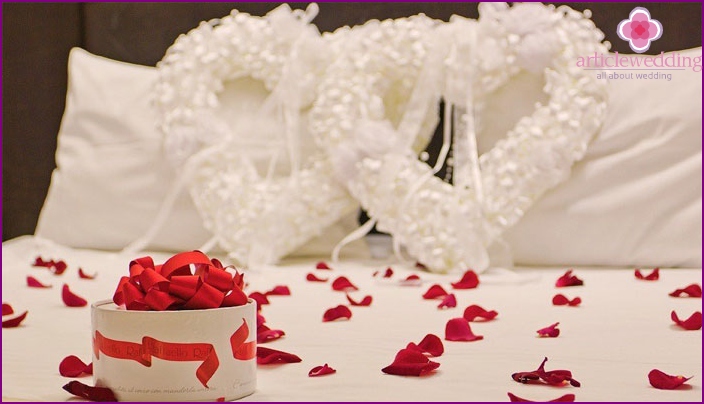 The modern Chinese wedding is reminiscent in a sense of the European celebration, having borrowed certain details of the preparation for a significant day and the celebration of the wedding ceremony itself. The Chinese bride, like a Russian girl, stylishly puts her hair in an intricate hairstyle. Groom - a gallant young man with a confident outlook on life. Find out what traditions the newlyweds are currently holding by watching the video below.