Home›Wedding fashion›Fashion for the bride›Wedding dress in the airborne forces style - what the bride looks like in him, photo

Wedding dress in the airborne forces style - what the bride looks like in him, photo

In the modern world, more and more wedding festivities are organized in unusual styles - marine, rustic, retro and the like, there are even celebrations in the style of airborne troops! What can encourage the newlyweds to combine such, at first glance, incompatible things - the Airborne Forces and the wedding. Often there is a simple explanation for this: some young men who served in the Air Force combine two holidays at once - a wedding with a girlfriend and Airborne Forces Day. Therefore, the future wife has a question about how to choose a dress for this day to look feminine?

What does a dress look like in the airborne forces?

In all of the cases listed below, it will be appropriate to combine the bride’s dress with individual elements resembling the uniform of fighters of the airborne troops. It can be blue, a vest, patchwork inserts in a khaki dress or an outfit completely made in this palette. Wedding attire of the Airborne Forces style young girls choose for several reasons: 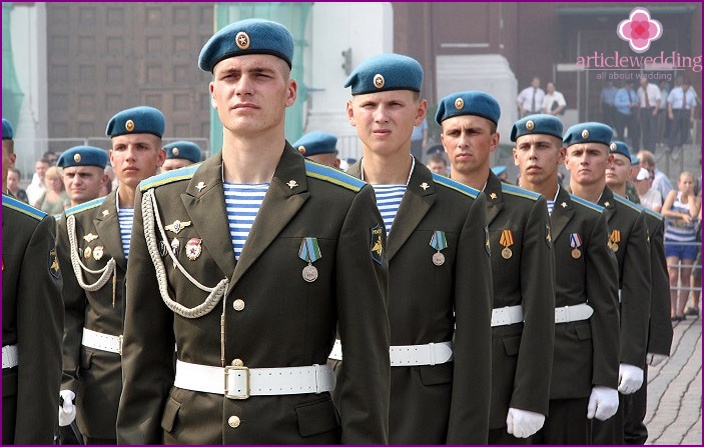 The bride, choosing a wedding dress in an unusual style of the Airborne Forces, should know that her whole image can be in one of three styles, based on the intensity of the manifestation of symbolism. By adjusting this saturation of attributes, she can make her wedding image more feminine or expressive against the background of the general surroundings of the wedding. Three styles of the image of the bride of the Airborne Forces: 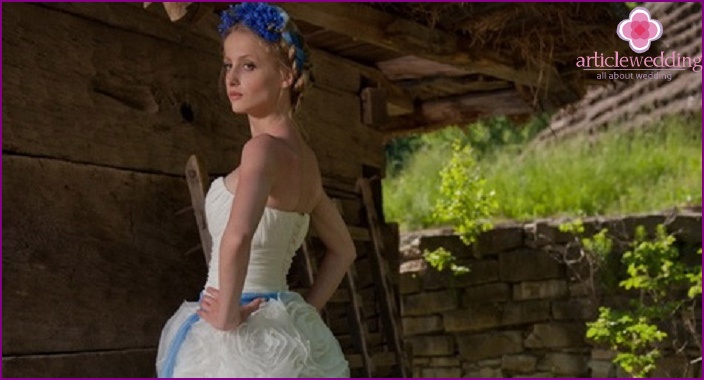 This set of attributes, included in the bride’s wedding outfit, is most expressive and directly indicates the style of the wedding. You can’t buy it, and therefore the bride will have to think through the style herself and order a dress from the master. To her image remained feminine and light in the dress of the Airborne Forces, when planning the style, it is necessary to use techniques that emphasize femininity. 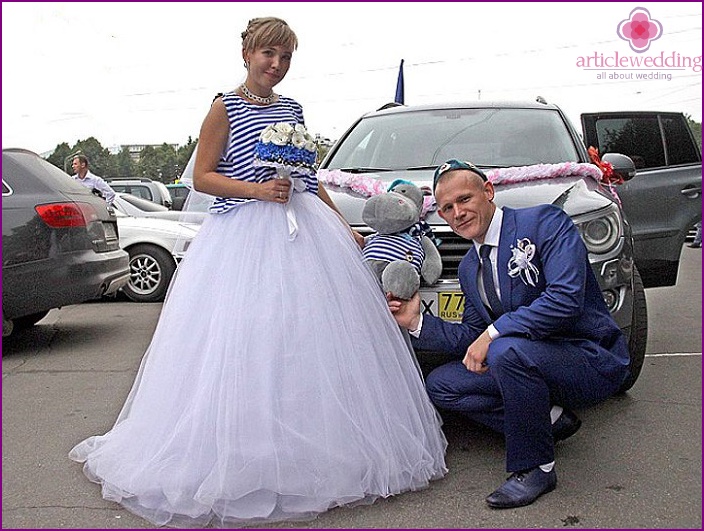 Tips for creating an image for the bride

Of particular importance in creating the image of the bride at the wedding on the day of the Airborne Forces are certain elements that can radically change it, make it easier or more aggressive. Thinking over the appearance as a whole, it is necessary to determine the degree of expressiveness of the outfit (so that it doesn’t turn out to be clumsy), together with the groom’s outfit, guests' costumes and room decoration. Everything should look harmonious. 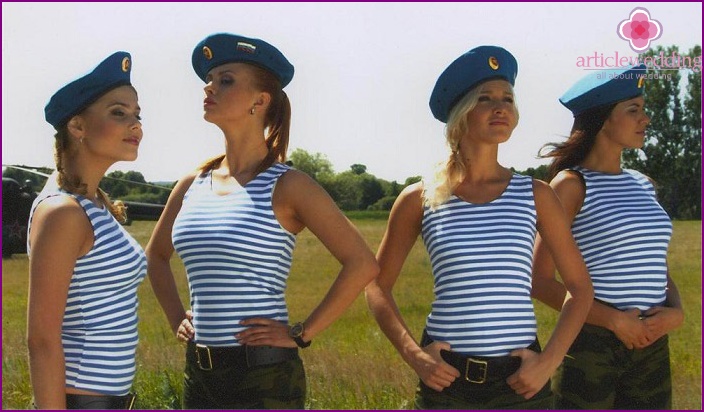 What hairstyle will be appropriate for the outfit?

The hairstyle should be slightly sloppy, as natural as possible. Do not make too complex styling - they will distract attention to yourself, the image will become oversaturated and will look ridiculous (military style is minimalism). Hairstyle is easy to adjust the wedding image, but because: 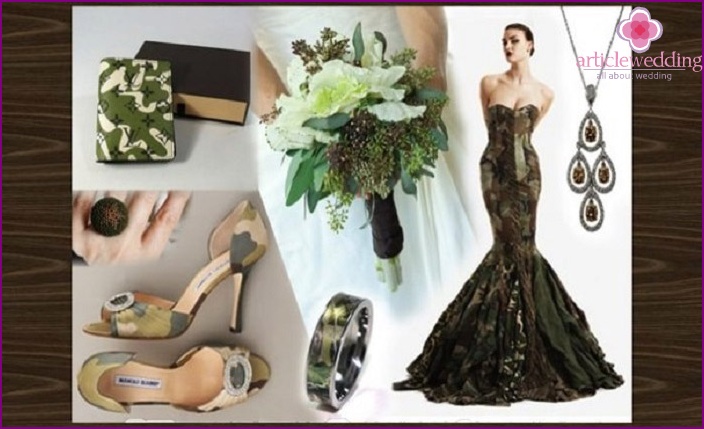 What accessories will suit it?

Accessories for a wedding dress on the day of the Airborne Forces can be:

The main rule - all this should not be much in one set. The image of the bride should be in harmony with the festive attire of the groom and the overall concept of the wedding.

Photo selection of bridesmaids dresses in the airborne forces style 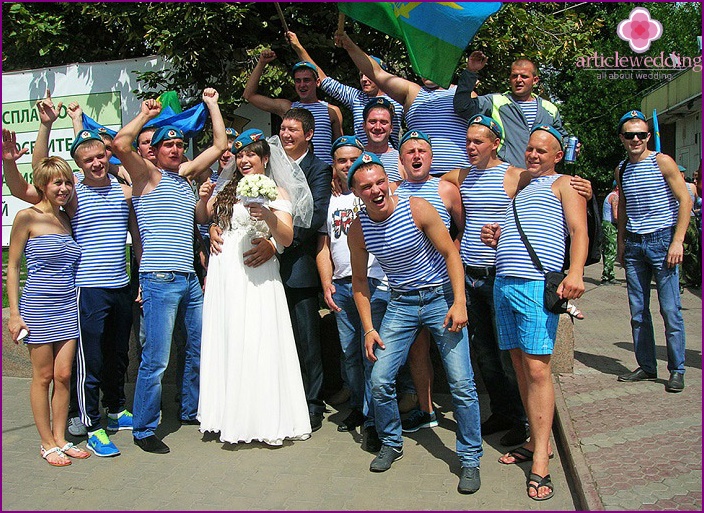 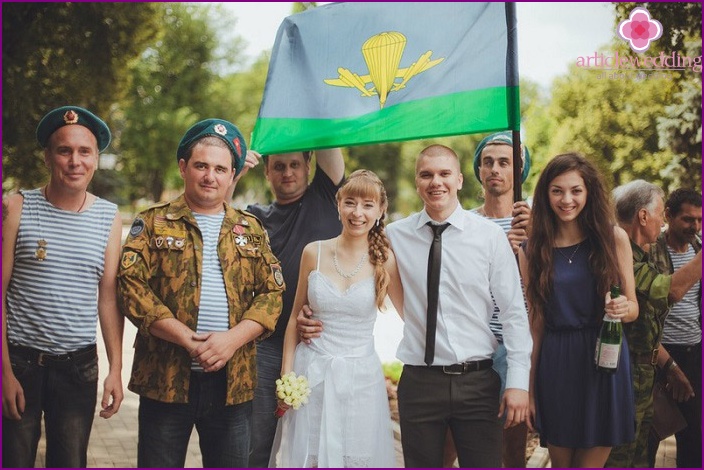 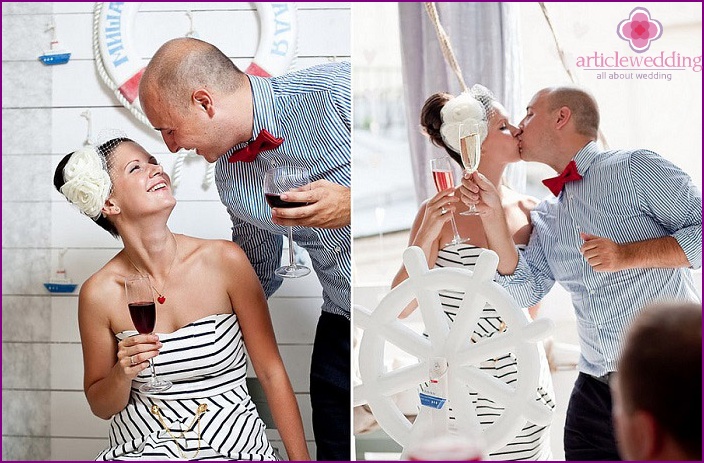 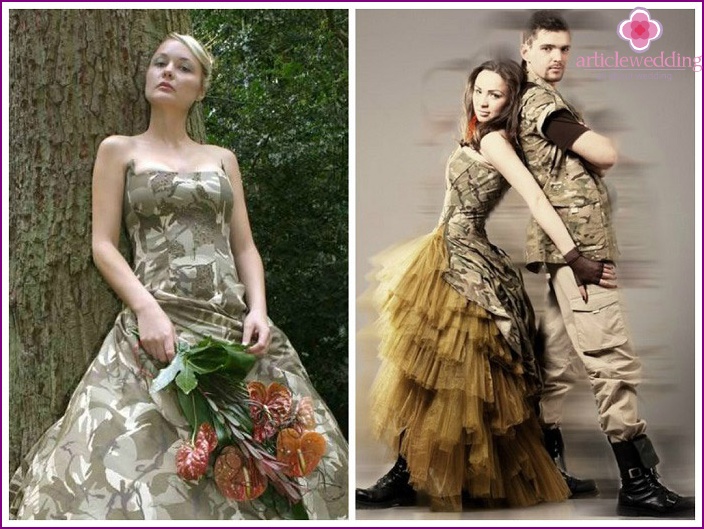 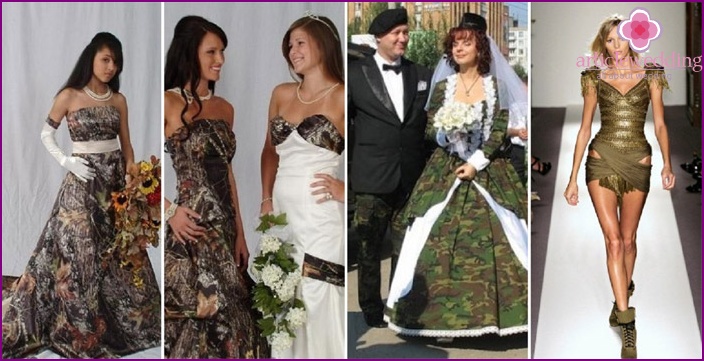 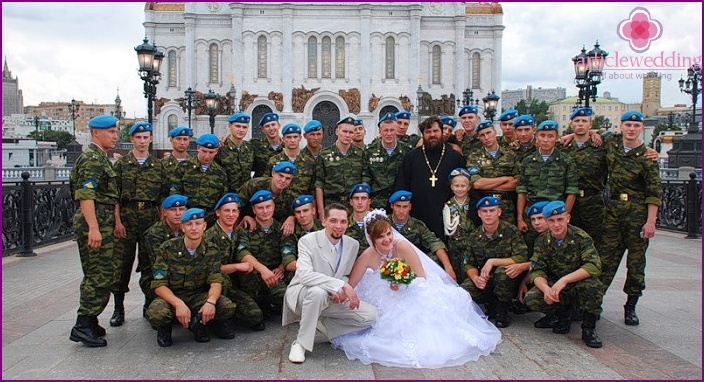