Music in a person creates an association with a certain event in life, and it is especially bright if the melody is beautiful. For example, the wedding march of Mendelssohn – it is a melody to hear which means the acquisition in the life of your soulmate, mutual love, happiness until the end of your days. When you enter the solemn wedding hall, and this music sounds in your honor, even goosebumps run through and it may seem that life stopped for a moment to capture this event. I wonder how this march was created and in what interpretations it can still sound..

We will delve deeper into the knowledge of history and take an interest in how the famous Mendelssohn’s march was created: the Great Austrian composer, being seventeen years old, wrote the aforementioned composition for musical design of a theater performance called «A dream in a summer night», written by William Shakespeare. The melody was supposed to sound the scene of the wedding of the donkey and the enchanted queen, creating an aura of mock pomposity of this ridiculous triumph. However, this composition did not acquire much popularity at that time, remaining almost unnoticed.

A few years later, the newlyweds of the small town of Tiverton will choose this musical composition of Mendelssohn for their own solemn mural ceremony to perpetuate the event of their own marriage. It was the first real wedding, at which the wedding march was heard, but again, it didn’t get much popularity at that time. Only half a century after the wedding of the Tiverton newlyweds, this fact became known to the public thanks to official records preserved in the archive of St. Peter's Church.

Fifteen years later, Mendelssohn’s famous composition was chosen for playing in a London church during the solemn marriage of Crown Prince of Prussia Friedrich Wilhelm and British Princess Victoria Adelaide. This was the first high-profile event, thanks to which this musical composition of the great author, associated with the wedding, became known. 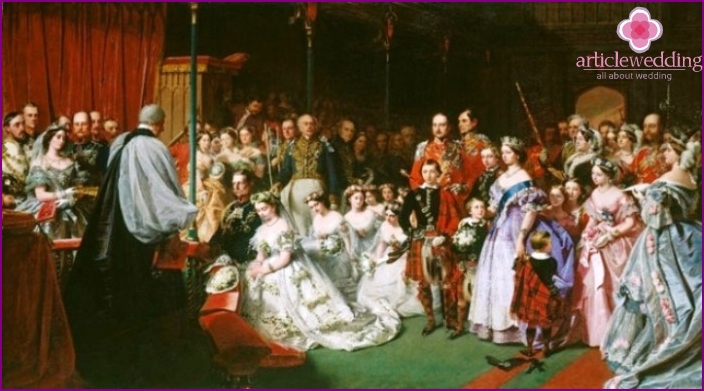 Since then it has become insanely fashionable, and the march of the prominent composer Mendelssohn began to be used everywhere as a wedding melody, while gaining the official status of the newlyweds. Today, without this music, you can not imagine a single solemn ceremony of marriage. Every future bride knows this composition literally by heart.

The original version of the original wedding tune, written by Mendelssohn himself, may seem a little stingy on character, emotionality and solemnity. However, imagine how many years ago it was written and it is clear that we are accustomed to a slightly different arrangement, which makes each one literally to the fingertips. But classics are classics and they are immortal; you cannot completely abandon the original idea, which has generated so many variations. Initial notes of the very classic melody of the Austrian composer: 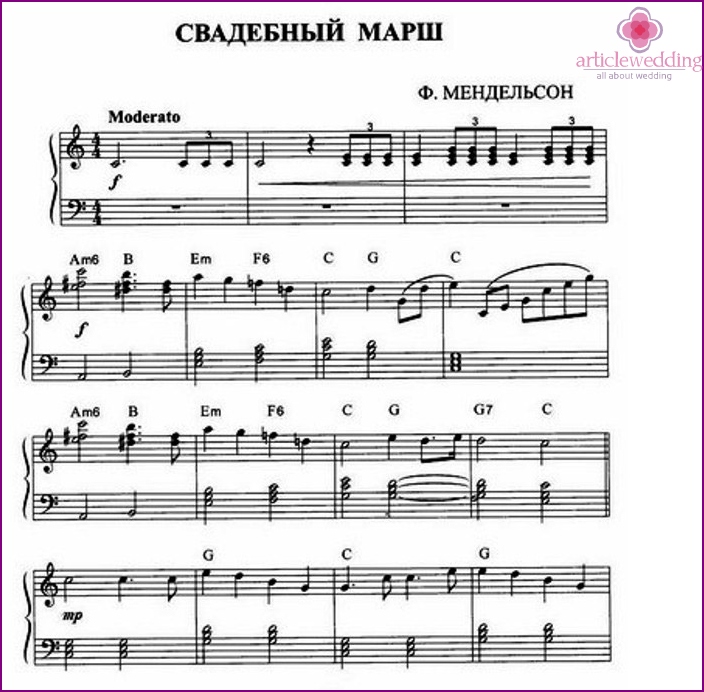 You can listen to this composition for hours, admiring the great musician and his unique gift. And each time it will be all the same wading emotions that fill your whole body with the anticipation of the wedding and its pomp. The second part of the magnificent wedding march of the famous author, decorated using the language of musical notes, you will find below in the photo:

There is a huge variety of interpretations of Mendelssohn's wedding melody using various musical instruments. It may seem to you that there is not a single person on Earth who would not like this music, because to every admirer – there is a variation of the famous composition of the Austrian author according to his musical preferences: classic, remix, modern style.

Due to the huge variety of musical instruments, the sound of this music can be different: it is playing the violin, piano, guitar, sound like in an opera, etc. Given the modern possibilities of arranging any music, you can safely choose your own favorite processing of the march of an outstanding composer and use it at your own wedding.

On the day of your own wedding, choose a live variation of Mendelssohn’s beautiful melody on the violin. This will create an unforgettable aura of the wedding atmosphere in a less grandiose tone, but remotely taking you to the still fresh memories of the newly acquired official family status. Dance the first dance of the bride and groom to the accompaniment of a violin playing Mendelssohn's wedding composition. No guest will be impressed by your beautiful wedding.

The piano – classic performance of a solemn wedding march. Many who graduated from music school tried to successfully reproduce the notes of this melody in their own game. It sounds no less beautiful, thanks to the gentle sound of this instrument, and the pleasure you get from repeating notes with your own hands cannot be compared with anything. What could be more romantic if you give your lover a beautiful piano playing on your wedding day, playing the famous Mendelssohn march.

Playing guitar – it is a whole art that turns into a masterpiece if you try to depict on it a game of classical music by outstanding composers. She will bring her exotic slice to the sound of Mendelssohn's wedding melody. Have you ever heard the play of this song on a guitar? If yes, then you should hear it again, and if not, then try and you will definitely like it. It’s a great idea to include a wedding march room in the entertainment program for guests at your wedding..