Weddings, who played a few centuries ago,significantly different from today's wedding. Many of the traditions of the past are preserved, but took other forms, mutated, losing the original meaning. Vintage wedding ceremonies in Russia (the suit of the bride, the bride, and the blessing of others.) Were an integral part of marriage, without the celebration could not take place. Descriptions of the sacraments and traditions presented below will help you understand how the ancient Russian wedding.

The Sacrament of the wedding ceremony in Russia

Go girl from one family to another - the basis ofwedding ceremonies of the past. It was believed that she died in her father's house, and after the wedding, was revived in her husband's family. On the wedding Woman hid in heavy fabrics, scarves, behind which could be seen on her face and body. On it was impossible to look, because according to legends it was "dead." By the altar were the bride, holding the hands, but after the wedding she left the church alone, "born again." 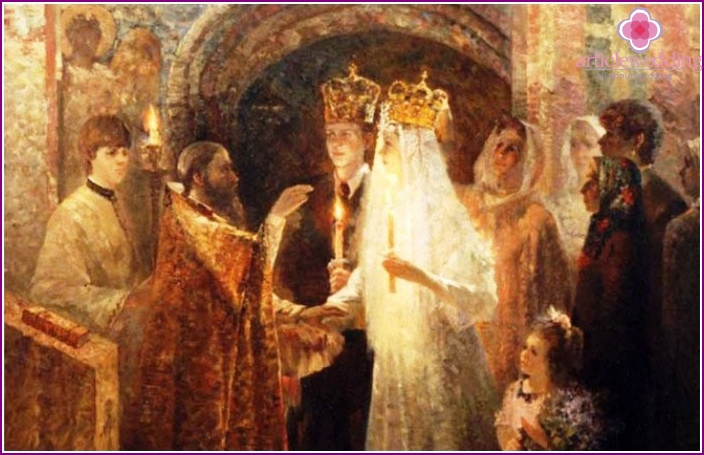 Many wedding ceremonies on the ancient Rus hadmagical motivated. Before a priest forever connected the souls of lovers, the future husband and wife were considered vulnerable to evil forces. There are plenty of rituals to help the young to avoid the evil eye, damage, for example, sweeping the road in front of the bride and groom. Rite exclude the possibility that the spouses under the legs will throw something that attracts evil spirits to a new family. To pass the way it was also considered a bad omen.

The wedding was celebrated in ancient times somedays. The first day was full of events: the bride was prepared for an early arrival betrothed, transporting dowry, then future wife received the blessing, went to the wedding feast. Large-scale wedding feast took place the next day, after the church wedding ceremony. During the wedding the groom had to observe the silence, so the responsibility for the accomplishment of wedding rituals lying on the friend (relative or friend of the groom). 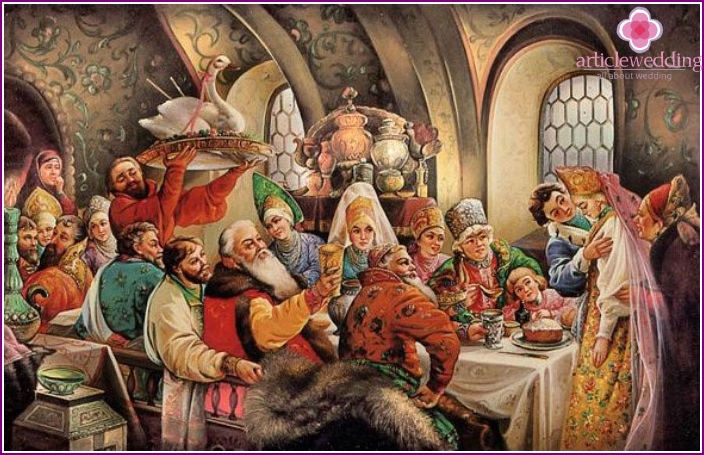 To avoid damage, the custom enjoined youngsleep in a new place - for the first wedding night they prepared Senik, which served as decoration icons, arrows on the four corners with the martens on them, the bed of the twenty-one sheaf. During the wedding feast the newlyweds drank and ate a little, and the last meal they brought to the bedside. In the morning with the help of arrows lifted the blanket, making sure there was an innocent bride getting married.

Courtship and preparing for the wedding

Before the wedding, there are several oldrites. The first was the suit, when relatives and friends of the bridegroom came to the bride's parents, extolled him, talked about the merits. To the meeting was successful, the matchmakers and matchmakers went a roundabout way, confusing tracks - it was the defense against the dark forces. The first time the bride's parents should refuse matchmakers, despite a preliminary agreement between the families of marriage. 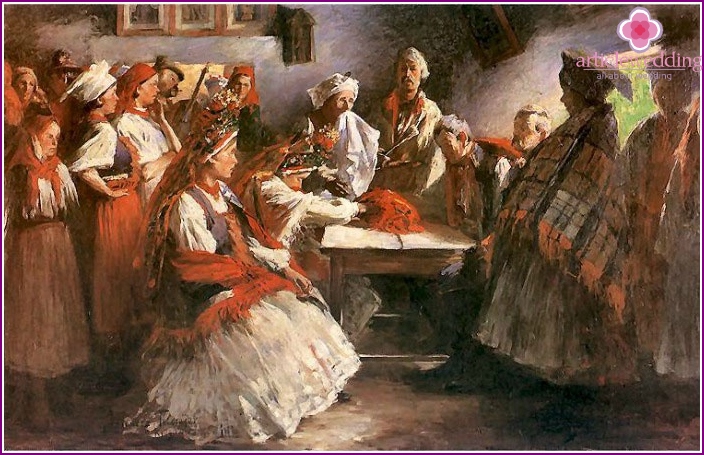 After the positive response of the matchmakersHe held another important ritual - the bride. It was an examination of the chosen clothes, dishes, general housekeeping. In the old days the bride could change the decision of parents to give his daughter in marriage - a man who is rich enough to provide it, was refused.

If the bride went well, and relativesgirls were satisfied with their material condition of the future spouse, appointed day, when the family officially announce his decision - even then nothing could stop the wedding, except for unforeseen force majeure. In Russia, on the betrothal it was to say during a feast in the presence of guests set.

On the eve of the triumph of the girl with her friendsit was necessary to go to the sauna. There they are washed, they sang songs and talked. After the bath lasted for a bachelorette party, which carried out the rites of protection from the dark forces - the bride's girlfriends described life with her husband gloomy, unhappy. It used to be that it will scare away the unclean spirits. Girls night divination performed by candlelight, circle dances, performed rituals to strengthen ties with her future husband. 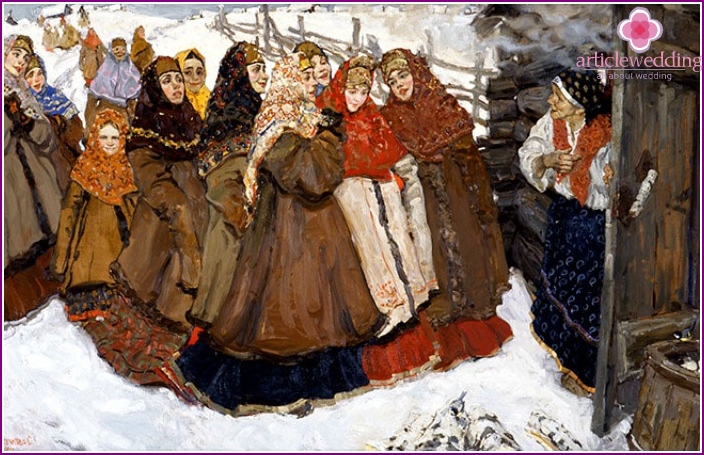 Unraveling braids betrothed her friends and weavinginstead of two braids - an important wedding ceremony in the list of the usual in Russia, which was held on the eve of the ceremony. It symbolized a farewell to the bride's girlhood, her emergence as a woman, a willingness to conceive a child.

The groom also attended the bath before the wedding ceremony, but one. In contrast to the narrowing which to spend the whole evening talking with friends, dancing, and wondering, he had to observe silence.

Orthodox rite parents' blessing,held in ancient times, it was considered one of the most important wedding events. Couples parted when were refused in the ritual of blessing. It is held as follows: future spouses before the wedding came to the court of the bride's parents home, where my mother and father met them with bread and salt, and baptized icons, wrapped a towel. Read more about the rite, see the photo below. 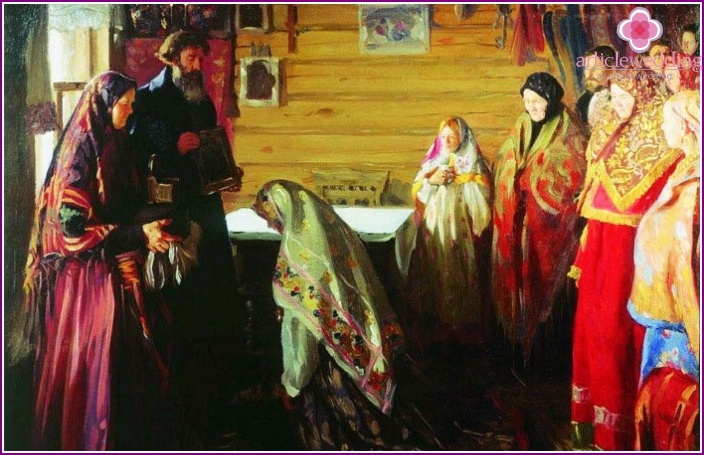 Young should refrain from drinking and eating forwedding table. They received gifts and congratulations, and at the time of the last meals (usually it was hot) left in Senik, where they spent their wedding night. Guests were allowed a few times during the night to wake newlyweds again to bring them to the table.

In the morning, when most of the guests tipsyIt leaves the feast was covered "sweet table". After him, the couple went to bathe, and the sheet or shirt bride often demonstrated villagers, proving the innocence of the maiden.

The third day of the wedding was difficult for his wife - she had to show their abilities as a housewife: melt the oven, cook dinner, wash the floors, and guests in various ways tried to stop her.

Peasant Wedding usually lasted three days. Narrowing called the "prince" and "princess" because the mystery of the wedding ceremony in this perspective in Russia was similar to the construction of the Princes in the dignity of power.

Many rituals and customs Wedding lostthe original meaning and attitude of modern people to the ancient rituals have changed - often limited to painting wedding at the registry office. But some couples continue to observe the ancient tradition of the celebration, paying tribute to the rich past of our country.

What kind of wedding ceremonies Russia you interesting? Maybe you were a participant in the wedding? Tell us about it in the comments.