The customs of the Uzbek people were formed onFor many centuries, so their wedding traditions are one of the most ancient on the planet. Uzbek wedding different large scale, numerous rituals, so they are a great event not only for honeymooners, but also for their families. Uzbek wedding traditions assume a certain sequence of events, where the very first thing is considered to search for a suitable bride. Often this process takes months and sometimes years. Wedding in Uzbek - a bright, interesting and tasty

The groom's parents to gather information about the future daughter-in by friends and acquaintances. Typically, they are interested in:

After candidacy is found and approved,there is the basic procedure for Matchmaking called fatiha-tui. To this end, invited the two men, who are sent to the house to your favorite girl. Their task: to draw a conclusion on the first impression of the bride and her family. Matchmakers traditionally keen eye to notice the level of cleanliness in the house, as well as the ability to watch the selected female candidates to take care of the guests.

Svah meet oriental welcome offerthem tea in the room, entertaining conversation, but by tradition the first time agreed to a marriage is not allowed. Parties tend to come to an agreement not earlier than the third time. As the consent of the bride side breaks the cake. Engagement fatiha-tui held on a grand scale: in the day the groom's parents strongly endows the bride money, beautiful fabrics, sweets and meats. 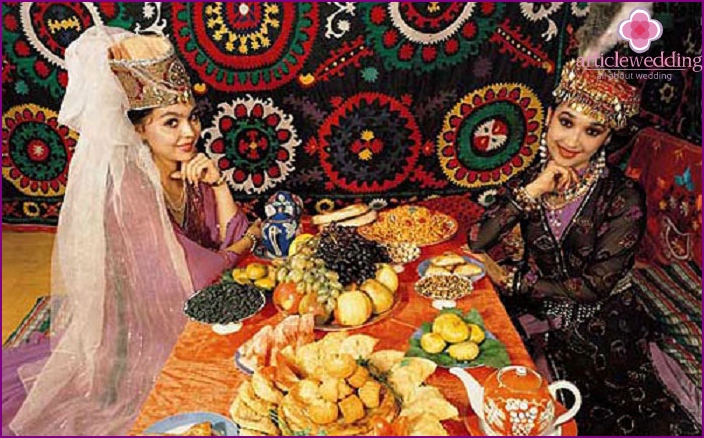 National Uzbek customs of the wedding

According to the Uzbek tradition of the wedding costs takesthe groom's party itself, but modern Uzbeks often cost is distributed by appointment. A expenses, to be honest, a lot, because the Uzbek wedding is celebrated with particular splendor. The highlight of the wedding ceremony - is the transition of women in man's house, but up to this point have to comply with many more usages.

According to Uzbek traditions wedding day begins withceremonial cooking pilaf. This event takes place at the bride's home, but it is brewed exclusively by men. The rite of the morning pilaf previously agreed with all the relatives, neighbors and acquaintances. Pilaf is ready already by the end of the morning prayer, after which the male population sits at tables on the tradition. For a long time men serving tea, cakes and pilaf in lagans (large dish). The already legendary Uzbek pilaf wedding lasts about two hours and he served only by men.

The bride, dressed in a festive traditionsuit, which he presented the bride's parents, comes to his future wife in the afternoon. A girl dressed in national wedding dress, be sure to cover the face veil to avoid being jinxed. Young, before being officially registered in the registry office, held near Imam engagement, which is called the Sacrament of "nikokh-Tui". During this ceremony the imam reads the prayer, after which the young make promises to be a friend and loved ones to be faithful.

The ritual farewell to the bride's parents

bride's farewell with her parents, too, isUzbek traditional rite. After sacrament "nikokh-Tui" and the official registration of marriage the newly-born husband brings his young wife in her parents' house to pick up the next morning. Parents traditionally symbolically mourn the girl, thus wishing her a happy family life. In the morning the young wife was finally leaving the parental home, accompanied by her husband. Seeing the girl's family sends along with her dowry: 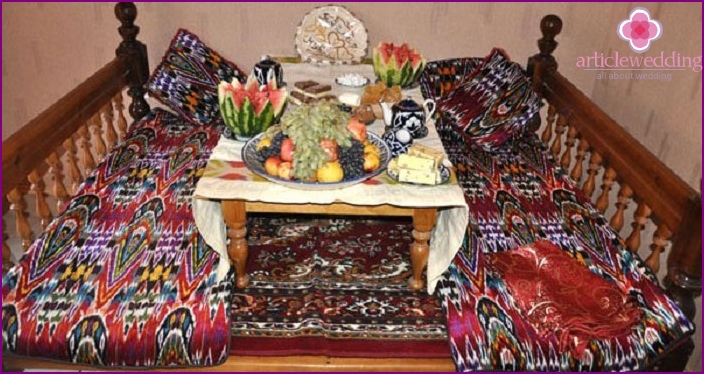 And then the husband leads the wife to her house, where herexpect his family, pre-paving to the steps of the white track. Since then, the tradition begins, in fact, family life newlyweds. Young wife, crossed the threshold of a new home, bowing to him, and her husband's relatives showered her with money, wishing a happy family life. After becoming acquainted with new housing starts basic fun that takes place in a man's house. However, the modern Uzbek financially secure families celebrate the wedding in restaurants.

Uzbek wedding celebration held noisy andfun. Number of guests in Uzbekistan often exceed 300-400 people. The feast is accompanied by national songs and dances, during which there is a video and photo shoot. Tables are crammed with traditional Uzbek treats that are known around the world: 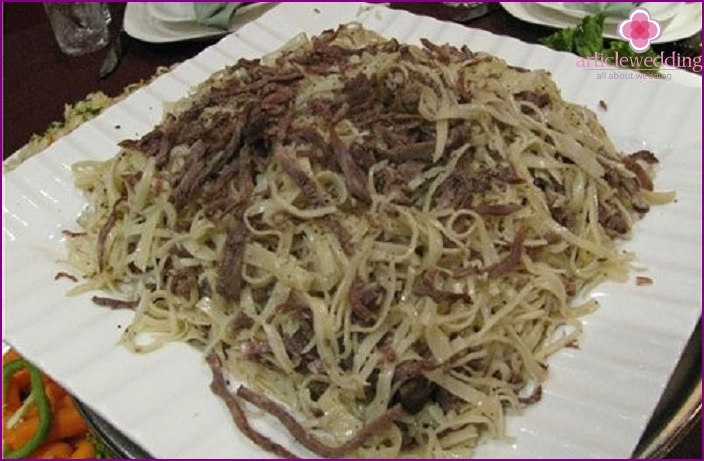 The celebration after the wedding, "Kelin lard"

"Kelin fat" - the finishing touch of the Uzbek wedding. The direct translation of the name means "greetings to the bride," when the next morning after the wedding, the groom's house the girls come home, and she goes to the guests the bride in national costume and welcomes their bows. But it is not just bows: for this young wife received gifts from the groom's parents and other relatives. By tradition and according to the kinship young give everything they need for married life: furniture, carpets, home appliances, jewelry.

Video: how the payment of dowry in Uzbekistan

When Uzbek bride's parents give it inanother family, it is believed that they lose their working hands, so demand for Woman traditional compensation, which in the East is called the bride money. The traditions of the country meant not just the transfer of property or money, but the real show. The video below will allow you to assess how it works: