The colorful traditions of Ukraine has always attractedattention of other nations for its rich variety. It is no exception and Ukrainian wedding: its richness exciting rites that have introduced more distant ancestors, is of great interest. Even a superficial study at least one wedding custom of Ukrainians, you just make sure that the Ukrainians can boast an original approach to the wedding issues. So many want to delve further and find out what else is rich with interesting traditions wedding of the Ukrainian people.

First Ukrainian wedding ceremony, to which allbegins, it refers to the preparatory (pre-wedding) stage. According to the ritual, relatives (father, uncle, older brothers) are sent to the bride's house - the two men from the groom. They give birth to the first official conversation with Ukrainian girls on the theme of the wedding parents. The art of such a dialogue is not to get a pumpkin (in Ukrainian - Garbuz), which symbolizes the resolute refusal of the girl. 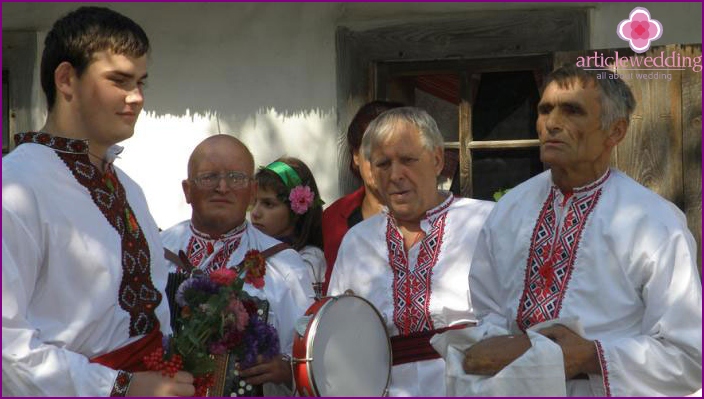 Following long-standing Ukrainian custom wedding, Swatwhile had to go for matchmaking not with empty hands, and taking with him a loaf of freshly baked bread. He was put on the table in the house of the bride, and then the one who is the authority in the family, began an exciting conversation with the parents of a girl marries. If the whole ritual was held successfully, the bride, who all this time was near, took brought bread and cut it, saying these words: "Cut the bread that I give to you my vows, and you accept me as his child."

After this replica on the wedding traditionscut loaf of Ukrainian people put on a towel and gave the matchmakers. Those, in turn, meet the following speech: "Thank you, girl red, embroidered towel that such Ryasnyi". Such mutual civility Ukrainians symbolized good agreement, after which it was decided immediately to agree on further action stage pre-wedding - the bride on your engagement.

During the wedding ceremony of the Ukrainianthe people of the groom's parents tried to seem as successful and helpful to once again bring to him the location of the bride's family. According to tradition, when the bride passed, she had to show all their skills. It shows the future in-law what she hostess. how quickly and deftly handles with homework. It was important to show all your wonderful cooking skills to win over the favor of the groom's mother. 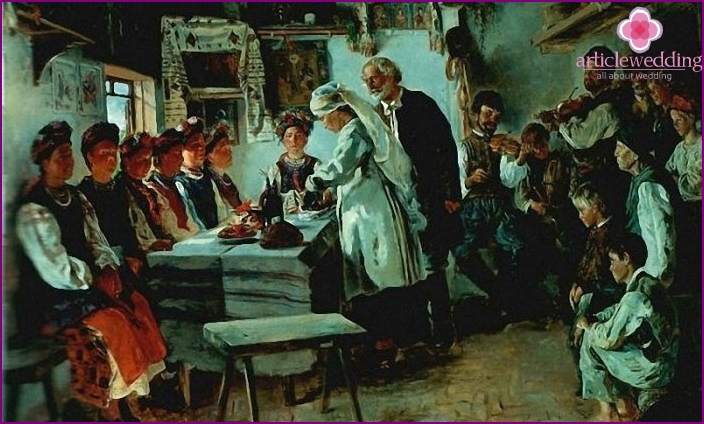 Immediately after the bridal show in the tradition of Ukraine wasEngagement - a kind of ritual of definitive consent to the marriage, which resounded in the presence of witnesses (publicly). The bride and groom tied a towel tightly connecting their hands (it was held for the "legal" bonding wedding contract and retroactive had). After that the bride was supposed to tie matchmakers and give them gifts (scarves, shirts, linen).

On the eve of the wedding the bride is traditionally Ukrainian friends gathered to say goodbye to her maiden youth and unmarried outgoing carefree life. The place to collect the girls sometimes acted bath. 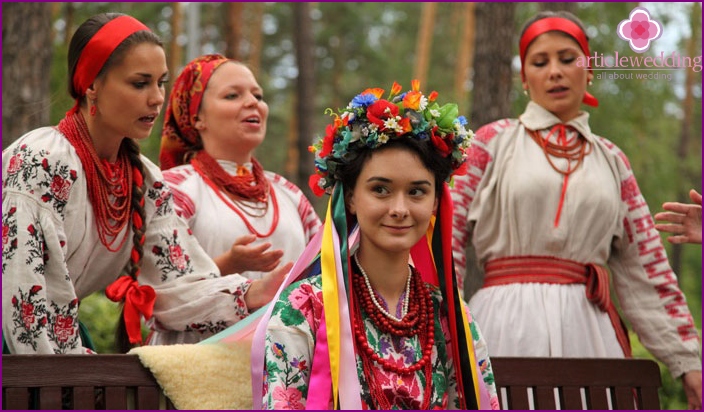 Following the wedding traditions of the Ukrainian people,Bride redemption takes place directly on the wedding day. The groom went for his lover to ever take her from home. Heading to the bride's dwelling, future husband met on the way ordinary passers-by, friends, acquaintances, relatives future wife, who were trying to take the guy bride price.

He arranged various tests, thankshe had not only tell, but also to show in practice their mental and physical abilities. According to Ukrainian wedding traditions, in the case of failure of the groom paying a certain sum of money, sweets, vodka or wine. After all these arduous tests, bought his beloved husband took his wife's hand and together they went to church. 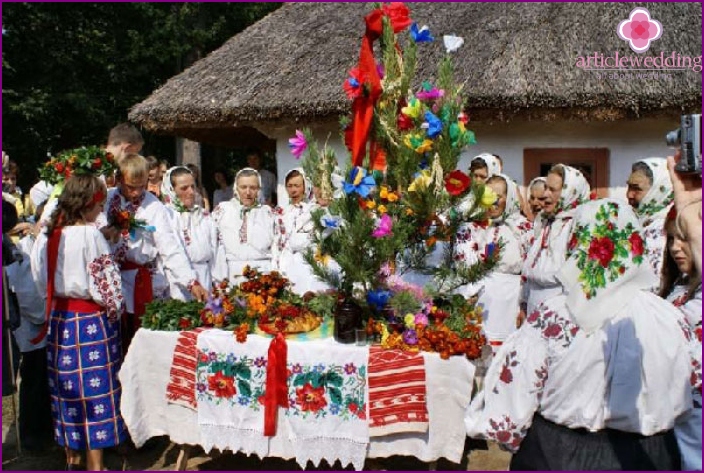 The rite of pouring water under the feet of a young

At the end of the sacrament wedding ceremony youngout of the church under the "rain" of grains and coins, which they showered the parents and other relatives of happiness. Often the Ukrainian custom wedding ritual was accompanied by pouring water under the feet of the young. In this way, parents have created symbolic obstacles suite of pre-drawn fire lines and water was used by them as a guardian, who extinguished the fire and served as a defense against the dark forces. It took the young Ukrainian rite of purification before the start of family life.

In ancient times the usual occupation of the Ukrainianwomen of all ages considered painstaking craft - embroidery towel. The future bride were beautifully embroidered a number of these towels, then to bestow each guest in the coveted her wedding day. The holidays towel laid out on the main attribute of Ukrainian table - bread. These two items (towel and bread) are inseparable concepts in Ukrainian rituals: the bread is always served on rushnyk as a symbol of material well-being.

Bread that is prepared for any occasion andwedding including the Ukrainians called the loaf. He served on rushnyk when parents meet young new status. Wedding Baked bread in Ukrainian villages are decorated with ears of wheat, guelder rose leaves and two rings. The first represents the future wealth of the family, the second - kind of fertility, and the third - the infinite faithfulness of spouses. According to Ukrainian wedding traditions, the couple break off from it in one piece, one the size of the ritual bread will be more - will be the head of the family.

The custom of "Choboty"

For gay wedding rites Ukrainian concernsRite "Choboty" (translated from Ukrainian - boots). He is the special action of the groom, designed to curry favor with his new-found mother in law. Following Ukrainian wedding ceremonies, the custom is performed as follows: 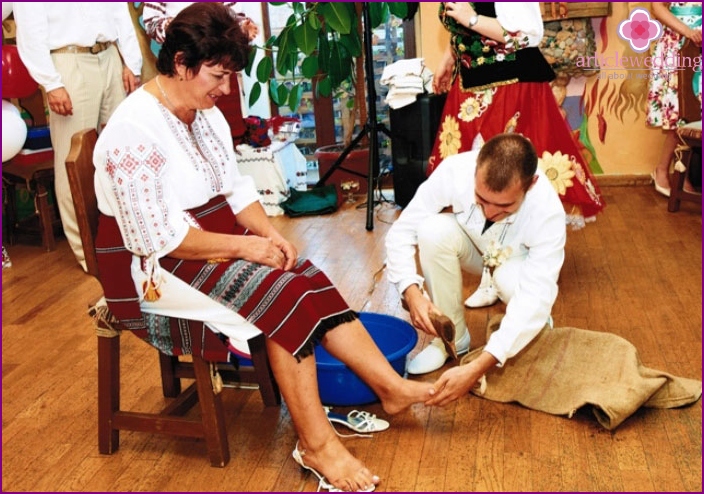 Rite "Bread and salt" is performed at the weddingparents of the bride and groom. According to old folk customs of Ukraine, this ritual is equivalent to the blessing on this or that important thing in everyone's life. Parents on both sides hold the specially baked loaf on top of which is a salt shaker. full of coarse salt. According to tradition, young break off a piece of loaf, and then Mokau it in salt. Rite "Bread and salt" symbolizes the blessing of parents coming to a happy family life they just hoops children. 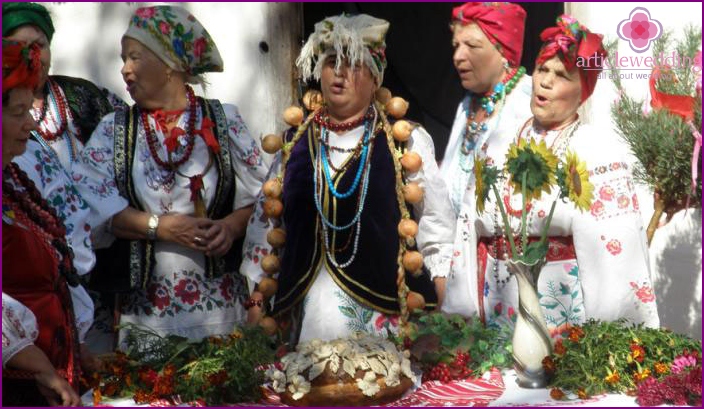 This ritual is one of the mosttouching moments in Ukrainian wedding. By tradition, the unwinding of the spit is already married girls should produce in-law, and helps her new husband. They carefully removed from the bride's head wreath with ribbons unravel maiden braid and tie a handkerchief over it or "ochipok" in Ukrainian. This action symbolizes the new status of the Ukrainian beauty - now she is married. After graduating from this ritual, wreath bride rushes toward the unmarried girls, to determine who is the next to marry. 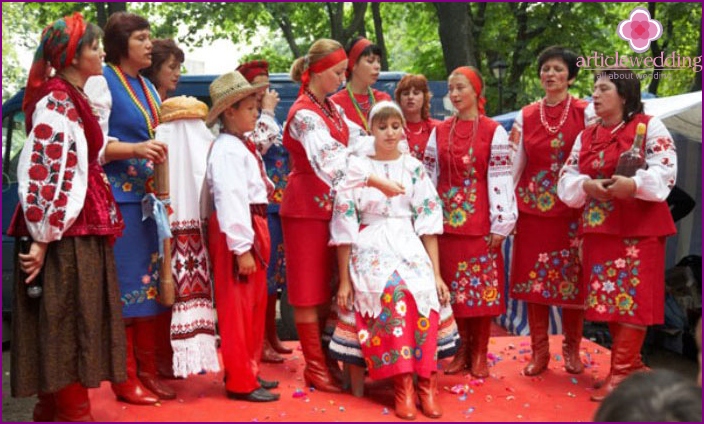 Rite "mummers" according to old Ukrainiantraditionally held in the cheerful atmosphere of the second day of the wedding. As the main heroes of the festivities are the bogus man and woman dressed as newlyweds. Guests loud having fun, dancing folk dances, sing songs, arrange plausible wedding festivities. In this way, in the times of the Gentiles people tried to divert the evil eye evil forces from the real protagonists wedding parties.

The traditional element of the festive attire forany events in Ukraine is considered to embroidery. Wedding - the perfect excuse to wear a shirt or a dress, which adorn the beautiful flowers, magic birds, or other ornaments. Embroidered clothing is worn by both men and women, it is made by means of patterns of different colors of thread made embroidery, cross-stitch, openwork.

In ancient times, all her own Ukrainianembroidered, and the main figures were poppy flowers, bunches of viburnum, oak leaves and so forth. The Ukrainian people believed that these plants are special characters in their traditions, because they represent wealth, happy life, love and prosperity. For every occasion, including weddings, there are certain patterns - for good luck, good luck to family life, on the continuation of the species.

Video: Wedding in the Ukrainian style

Increasingly, you can see how a modern weddingIt aims to repeat the history of the long-standing Ukrainian people with its wedding ceremonies. It is becoming more and more popular when it comes to organizing the wedding entertainment program. These rituals are accompanied by fun and laughter, mischief and held primarily as entertainment competitions for all the invited guests at the celebration. To be able to see firsthand how the wedding looks colorful in the Ukrainian style, with its traditions, watch this video: