Other nations of the world have a unique traditionWedding ceremony, the knowledge of which has been transmitted from generation to generation. However, the representatives of other nations can also inherit these customs, if they want to make their wedding the original, marry with the carrier of these traditions, or are engaged in the study of the culture of the people. In many countries, Roma communities live, so the chances to marry (or marry) of the gypsy (in gypsy) is very high. What wedding traditions are at Roma?

Gypsy wedding tradition lasts for three days, shefull of traditions, many of which have survived from the distant past. A distinctive feature of the marriage of the Roma people - is that a hike to the registrar for them is not required, just need the approval of the community, and divorce is not provided. Another feature - chastity before marriage and strong morals, and therefore men and women (even the bride and groom before the wedding day of the second) during a party arranged separately so as not to touch each other.

Matchmaking at a young age

A common tradition among the Roma - children back in matchmakinginfancy. This usually happens in friendly families who want to hard-to intermarry. The bride does not have to know that it make a match, and this is understandable, if at the time she was still a child. In addition, the Roma families still strong classical patriarchal structure in which the daughter did not dare to contradict his father, even in such an important issue for her.

During courtship the relatives of the groom come to the house of the girl's parents (or woman) and bring the two main attributes:

If all this is put on the table, so parentsbride do not mind to marry off his daughter to the groom. During courtship occur bride future wife, agreed redemption amount that is sent to parents of the girl. The contribution of the bride's hand in the welfare of young families is rich dowry - mainly pillows, blankets, jewelry and more.

The choice of the day and month of celebration

Wedding in Roma - a special event. Given the duration of the festival (the celebration is divided into three days), it is required to be appointed for the summer, when visitors can roam, sing and dance in a comfortable environment. Previously, it was decided to set low tables, spread carpets on the ground, which should have been invited to sit, that would be impossible in the cold season. Nowadays, this tradition is carried out rarely, but the custom was to celebrate the summer. 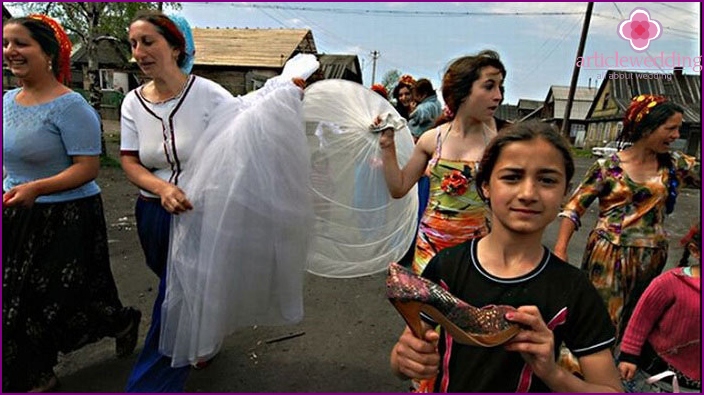 Stealing the bride and the payment of a ransom

It agreed to pay a ransom for the Roma familiesbride, groom that want to marry. Part of it compensates for the loss of an assistant, who was in the house of the girl's parents, as part of the waste of the newly formed family. redemption amount must be equivalent to the advantages of the future wife. If the bride was not able to pay the required amount of money, or the bride's side did not agree to the marriage of their daughter with him, he often stole the bride, carried away in his house or outside of the community. Nowadays, future wives steal rare, but if it happens, then all pradnichnye waste and costs are passed on to the family of the bride. 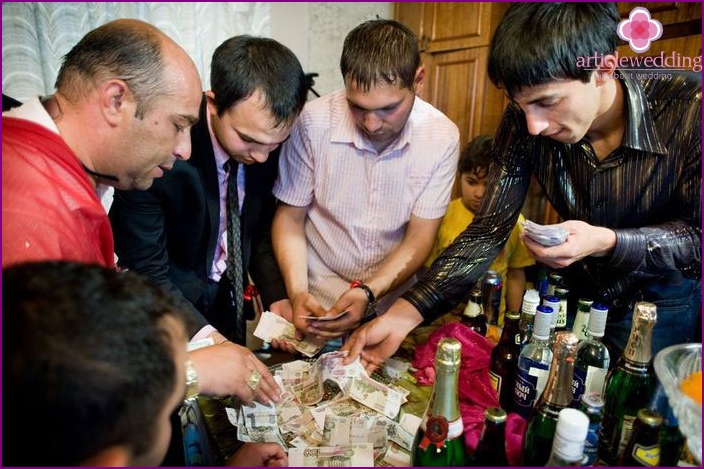 Blessing of the icon or bread

Blessing of the icon, and bread is madeOnly the Orthodox Roma, but that does not change their caste structure, which originates from the Indian customs. Therefore, the icon may bless the newlyweds only the upper strata of the community, a lower - only bread. Sam wedding a loaf is baked exclusively those women who have succeeded in married life, the others buy it.

The tradition of gypsy wedding "Removal of honor» MoreIt called rite of information and means the actual union of the newlyweds. The custom made after the wedding festivities: the bride and groom appear before the most senior family members who tell them words of encouragement, give bread and salt. Eating a piece of baking, the couple go into the bridal tent or bedroom, where the mixing, after which the guests shall be made tray with Bride shirt and red flowers.

There is another variant of the tradition, according to whichIt imposed no shirt, and a sheet with traces of blood, to which the bride lost her virginity. This is the "Removal of honor" - a symbolic event which marks the point of the actual creation of a new family. After the information held his wife wears a red dress and go out to the guests. If the shirt will not be imposed or on the sheet will not be blood on the bride and her family bear the shame and marriage dissolve. 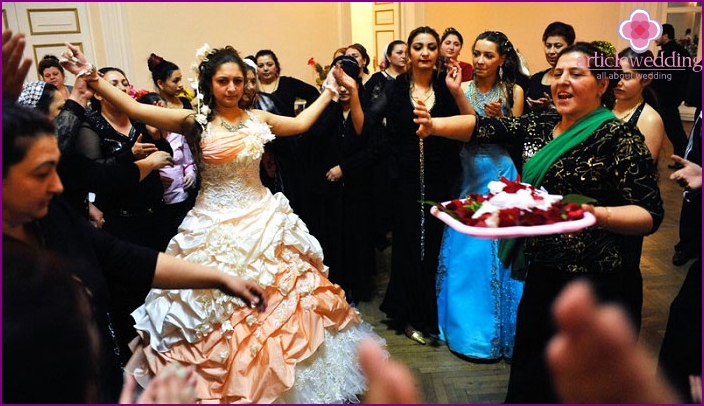 Rite "fraternization" occurs between the newly mintedhusband and wife after having been made "Removal of honor." It is a demonstration of unity of blood: incisions are made at the hands of the newlyweds, who then come into contact, so that the blood of the wounds mixed. Now the couple are considered family members are obliged to share everything in half and raise their children together. 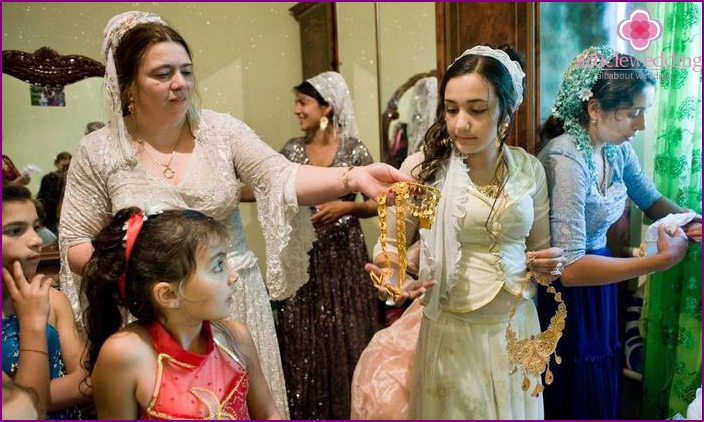 Customs gypsy wedding - colorful ethnicphenomenon, which goes back to the traditions of the classical patriarchal community and unusual for the modern Slavs. However, in the past in our land there was something similar, and therefore learn more about Roma foundations it would be interesting and useful to everyone. You can see how organized and held a gypsy wedding on the example shown in this video:

Ideas for hen before the wedding