By marriage Caucasians prepared carefully,since the creation of a young family, procreation is considered to be a particularly important event in life of everyone. Ancient traditions of the Chechen wedding present in modern marriage. This great holiday enveloped distinctive rituals, colorful elements of Caucasian culture. The girl is getting married, and a man marries strictly with the consent of the parents of both families.

Features of wedding traditions of the Chechen people

According to the Chechen wedding tradition, the name offuture bride carefully check maternal, paternal three generations in order to avoid a possible incest. In addition, it evaluates the bride, given the consistency of her relatives, real neighbors, acquaintances. The groom has to accumulate a decent sum of money because his family will treat all invited to the wedding guests, a lot of finance need to suit and bride price. 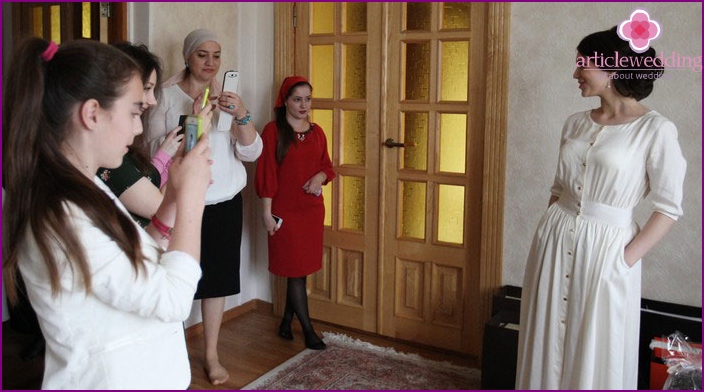 Matchmaking Chechens occur originally. Even while dating a guy who liked a girl, a mediator handed her a piece of candy in a sign of interest, attention to it. Girl "reciprocate" - otdarivala man two handkerchiefs. Such advances were repeated two more times, after which the young man learned of the girl's final decision on the creation of an alliance between them. The last word was his father Chechen.

There is a misconception, as if the bride groomliterally "bought" her parents. In fact, it is a psychological step, the essence of which - to show their worth and generosity. Ransom Chechens demonstrated their gratitude to the bride's parents for their daughter, extolling the essence of human values ​​over material. The amount of dowry said Mullah. But relatives of the young always give more money, demonstrating its good intentions, positive attitude to the bride and her family. Dowry is usually given to the bride as the first capital to start married life.

On the eve of dressing the bride in a wedding dressperformed the ritual bathing. Bath fumigated herbs, and water was added infusions of herbs. On the skin clean and fresh girl applied symbolic patterns - stripes on the back and arms. Next, we perform the ritual "Chokhi". Mother aunt of the bride, friend pinned a new needle to hem wedding dress from the evil eye and evil forces. By the dowry the bride secretly hid beans, corn on the cob, apricot or peach. This action was the wish that she became the mother of many children. 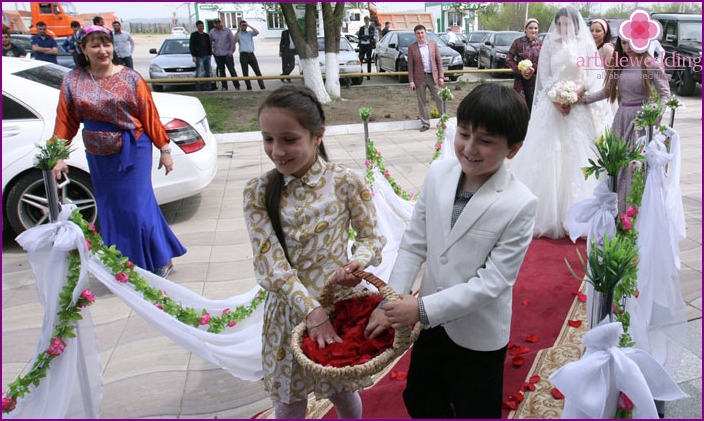 Suite handed handsome handkerchief insidewhich were wrapped silver ruble and the tape. These gifts, along with a needle on the hem dresses bride kept all his life as a precious relic. Further held ransom the young friends of the groom. Fun, laughter, eloquent arguments from both parties (bride and groom) over who owns the bride, reigns in the courtyard of the young. The culprit celebration collecting dowry, then the wedding procession was heading home to her spouse. Guests went home, leaving only young relatives came from afar.

The arrival of the mullahs for marriage

The rite of marriage according to the Quran makes a mullah,the representative of the Muslim clergy, first in the house of the bride, then the groom. All extraneous left home, except for the groom, best man and two women already married. The ritual was carried out against the evil eye, leaving the room just above the listed participants rite. Schafer three times led the young around the hearth, after tearing the iron chain or rope. This ceremony symbolized the break with the daughter of her family.

Mullah conducted the same procedure in the roomnewlywed, where the two men were present. Any case, who testified at the groom - young men or married men. Task mullahs - to have time to perform the ceremony of marriage the groom's union with his betrothed until the wedding procession with the bride has not arrived to the young man's house. Following the ceremony in both families thought that the young are already married.

In the courtyard of the groom is preparing a wedding procession,whose purpose - to bring the bride to her future home. Wedding train formed from a large number of cars. The first and most attractive car - bride. The path going to wise old man, the sister of her spouse, the Muslim priest (Mullah). Wedding train quickly rushes to the bride's home, with each driver trying to overtake its neighbor on the road. These "race" suspend the first car for the bride, reducing speed to avoid accidents. 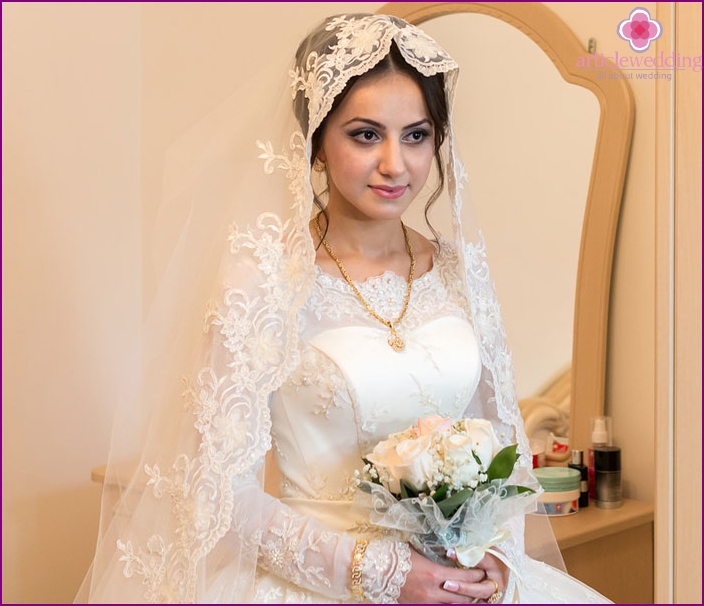 The guests of the bride and relatives eagerly awaitwedding procession of the groom. And when the "train" has arrived, the guests get to know each other. Everywhere reigns fun, laughing. The bride's parents were guests treated to various delicacies. Then begins a symbolic "matchmaking" and zaohalol - Chechen dances. After a while the procession takes the bride, wedding train takes away the bride to the house of the upcoming holiday. There bride indicate the angle where it will stay until the end of the wedding celebration.

Tradition "mat with a broom"

Upon arrival of the train wedding for the bride to beanother test - the carpet with a broom. Bride under the cheers, congratulations go out to the guests lined with carpet in-law home. In front of her are a broom and a small mat. Her task - do not miss these "gifts", showing his thrift, to take them away. Chechen women from a young betrothed showered with money, sweets, presented with a spoonful of oil-in-law, and honey, and then try to give a daughter.

As the evening the bride is involved inancient rite of "unleashing the language." There is always present in-law, adult males. Elder wedding bride presents a bowl with water. To his question whether it is possible to drink young answers, "Drink." But before that the young men laugh, entertain the bride, trying to talk. The girl must endure, not to say a word. The groom after hearing "drink" is also trying to talk with her husband. Bride "unleashes language" only after the giving of her fiance money. This amount, according to tradition, it transmits in-law.

Young Chechen daughter after a recent noisywedding was to enter into the family of the groom in a special ceremony. For a married woman in a cheerful environment of youth diverted to a nearby pond. The bride carried a large jar, and had to get water after the ritual. The day before baking the cake inside with a needle, which was on the lap of the bride dress during the wedding. This cake is thrown into a pond, then shot at culinary products. All the fun and happy with the water in the jug back to the village.

The tradition and the rules of the Chechen wedding feast 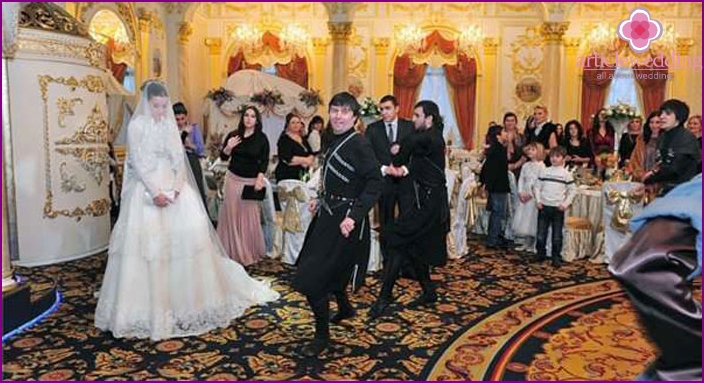 Wedding event Chechens say two or threeof the day, regardless of the weather - in the courtyard. The groom is the same these days with his friend. The bride, according to Chechen traditions wedding should stand on ceremony, never sitting down. Near it is only a friend, which was allowed to eat. Inal-toastmaster, dear people of the village sat on the place of honor wedding table. On one side of them took their seats the girl, on the other - male, with age. Children and adolescents were at the festive table. 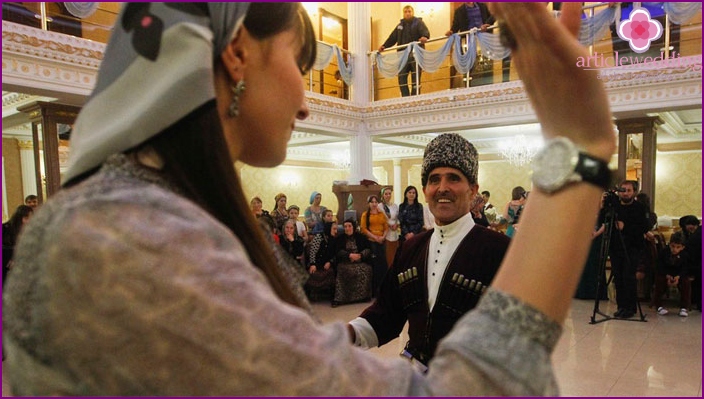 After the greetings of young parents startdancing. At the wedding, everyone walked. The dance floor was divided into two parts - a separate semicircles dancing men and women. Dance Tamada led dances, organized a pair of dancers. The bride stood modestly and silently in the corner. After a few hours in-law opened the veil of his daughter. Later, the young gifts to gifts, then sent home to the groom.

Video: custom wedding in Chechnya - shooting into the air

Chechens - ancient warlike people, but even inpeacetime, can break the silence loud sounds of their weapons. No Chechen wedding is complete without a shot into the air. What does the barrage of weapons to find out in the video below submitted