In Bashkortostan, the decision to marry children traditionallyParents are accepted, and there were times when the young until the day of the wedding have not even seen. The rite of marriage is usually held at home. To this end, the mullah was invited to an official marriage and a corresponding entry on this in the register. Bashkir wedding traditions have a long history, but as it is now, before the ceremony could take place at home or in the mosque.

Wedding traditions and ceremonies of Bashkiria

Plans for the future wedding appeared in the parents,when their child was still under 5 years. Traditionally, the Bashkirs held a ceremony "syrgatuy" - future engagement narrowed. When approaching the time of betrothal, the family began a thorough preparation for the celebration: collecting dowry, sewed costumes, preparing the house for the arrival of guests. Bashkir wedding ceremony involves several steps:

According to the traditions of the Bashkir, a young father,after consulting with his wife, he inquired of the future groom, if he agrees to the marriage. The head of the family determines who will be the bride. And though his mother and participated in the selection process, but only indirectly. After determining the future daughter-father was a potential father-negotiate the wedding. Once it has been obtained by the girl's father agreed, started talks about the bride-price.

To confirm the marriage agreementboth families (bride and groom) is traditionally drunk from the same cup mare's milk or honey. After that, she became a bride, and the parents do not have the right to give her in marriage to another, even if the couple became unsuitable in the future groom selected (for example, the deterioration of the financial condition). If the father made the decision to waive the wedding contract, according to tradition, he had to pay off, giving the man money or livestock. 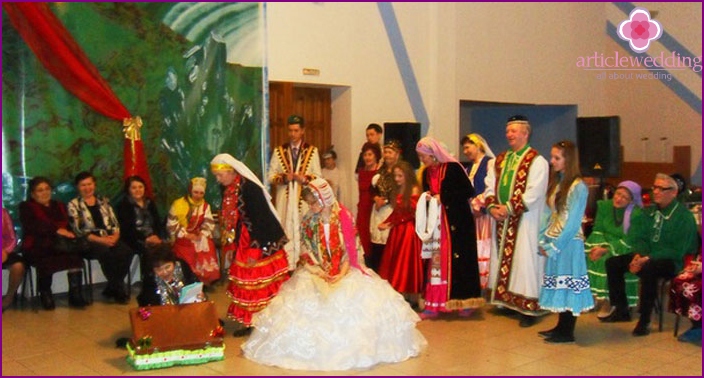 The size of the wedding dowry Bashkirdetermined by the financial possibilities of both families. It has traditionally consisted of cattle, footwear, clothing and other goods. All the gifts were a bride, excluding horses. One of them gave the girl's father, and the other slaughtered for the wedding dinner. Mother of the bride received as a ransom for the daughter of a fox fur coat. Despite the fact that the size of the dowry Bashkir wedding tradition could fluctuate mandating gifts that the family had to present the groom future wife. These included:

The rest of the redemption (if any)He handed the bride's father, who in return gave the money to a young family, cattle. Naming of the groom in the appendage to the whole received a "small dowry" in the form of a handkerchief, tablecloth, coat, boots, and other traditional items. Conclusion The conditions related to the redemption of the size, traditionally marked by a modest refreshments. 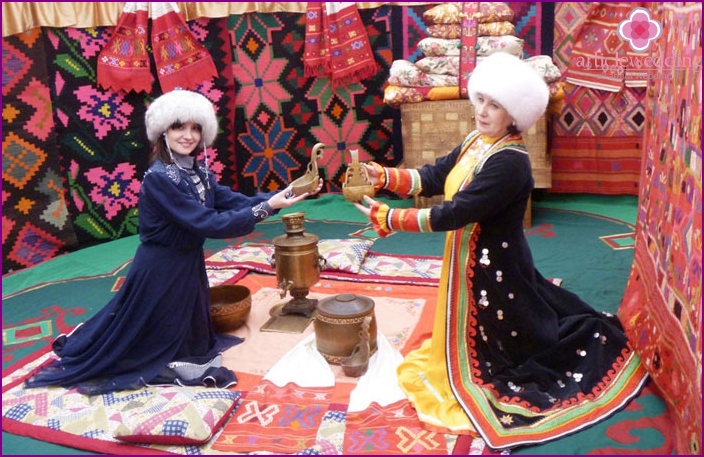 Visit the home of the bride

A couple of days before the first visit of the groom to the bride,when Mullah will be formally concluded the marriage, the girl's father for Bashkir tradition invites to his home and relatives said the arrival of the matchmakers. When invited to agree to help in organizing a wedding, a young family invites guests from the groom's side. Father of the groom at the first visit daughter at home brings with him a horse (which was later slaughtered). All who came to the wedding guests stayed in the house of the bride's family. They were treated to a traditional bishbarmakom then began handing brought young gifts.

At night, guests were allocated living in their own homesthe same village of the bride's family relatives. The next day, the wedding is traditionally slaughtered horse. In this process involved not only men but also women, who checked whether the meat fat. Guests knowing what to expect, wore simple clothes. When invited to come at the appointed place, they are screaming hurling matchmaker, and began a mass brawl, which was a traditional wedding fun Bashkirs.

After spending a couple of days at the matchmakers, guests leaving theirhome. Later, the mother-in-law to go to the father of the young. And prepared to receive them special rooms - male and female. The girl's mother, for Bashkir tradition, brought home a chest in which lay the handkerchief, calico rags, thread and shirt. After dinner, the men went to the woman's room, where the bride's mother offered to one of the women present to open the chest.

For this the consent of the woman receives a giftscarf, and scraps of fabric matchmaker men sold for a symbolic fee. The yarns were presented old woman, who did not give anything in return, but took them with prayers. A shirt father of the groom traditionally gave, in return he gave the family the girl some cattle. After the distribution of gifts matchmakers said goodbye and went home. 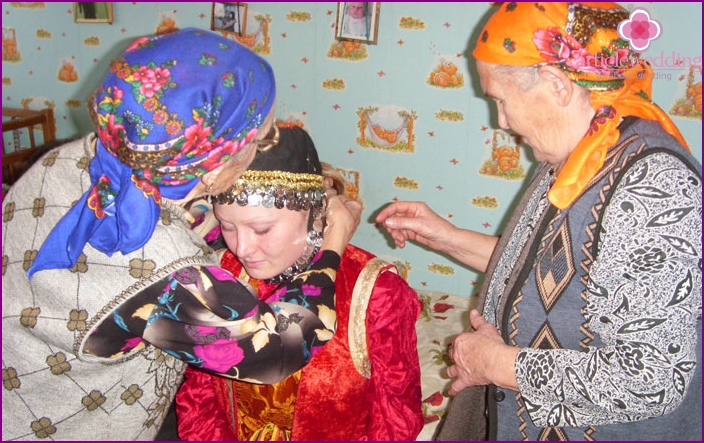 By tradition, the wedding ceremony BashkirIt took place in the house of the bride's father. There were going to the elderly, who were present during the earlier courtship. He came mullah and asked the young father, if he agrees to marry. If the answer was affirmative, the mullah read part of the Koran and has made the marriage contract in the register. For that he has traditionally paid 1% of the amount of dowry. After that, the bridegroom received a legal right as a husband to visit betrothed to her father's house.

After payment of a wedding dowry the groom with hisrelatives came for his wife in-law home. That advance was preparing for the arrival of the groom, arranging traditional holiday Tui. However, if the head of the girl's family was not rich, it was limited to a modest proposal treats. Bashkir Tui holiday, according to tradition, took place for 2-3 days. Rich parents staged fighting, racing, sports, general lavish meal.

Check out the bride to the house of her husband

When it was time for the departure of young, fortradition, young sister and other relatives staged various intrigues and obstacles. To do this, they carried the girl into the forest bed and tied it tight knots with rope, the ends of which hide under the roots of trees. Samu bride planted on the bed, then began to fight for her friends and relatives of the groom. This ancient tradition of Bashkir weddings, which is often carried both sides serious damage in the form of torn clothing.

Before leaving, the young, tradition,I said goodbye to relatives. She went around the house all the families in the village. Surrounding a Woman 4 friends who were holding the corners of a handkerchief over her head and raised the cry. Each young cousin gave tablecloths, towels, yarn. Instead, women have traditionally betrothed gave money and other valuables. Then a friend put on the best suit young and recovered to the cart, which was supposed to take her to her husband. And she has actively resisted until the brothers and the father did not give her anything. 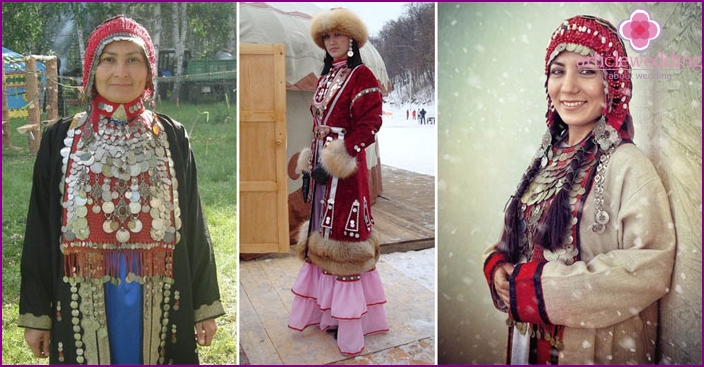 In Bashkir tradition, accompanied by a young onerelative who "sold" her father redemption young. When she first crossed the threshold of her husband's house, she had three times to kneel in front of her father, who, after each of the following times raised the bride. Then she gave her husband's relatives gifts, and they portrayed the response to her generous gifts.

The next day after the wedding

In the morning, according to tradition, the bride sent toa yoke and buckets to the well to fetch water. Since she took a silver coin tied to a string. This symbolic object Bashkir young wife threw into the water as an offering to the spirit of water. Children who surrounded her at this time, actively tried to catch a coin out of the water. From that moment she could not hesitate to open the face in front of her husband.

What made the young dress in Bashkortostan for the wedding?

By Bashkir wedding prepared very carefully. Bridal sewed elegant clothes, that after the ceremony they could be worn on special occasions. Traditional festival was full of bright colors that it brings colorful ladies' dress with a fluffy skirt, decorated with colorful satin ribbons, patterns, stripes and ruffles. In some regions, Bashkortostan wedding dresses traditionally decorated with chain stitch embroidery. On top of the basic outfit donned gowns and coats.

Important in the Bashkir wedding customs wereTraditional dressing of the bride in a woman's suit. This ritual took place before the execution of a young laments, after which it was taken to the house of her husband. Of particular importance was the bride headdress. Often the wedding with the girl removed her hat and put on a female. In the south-eastern part of Bashkortostan bride's head covered with a handkerchief, which he put on top of shlemoobrazny Cashman made of silver and coral. In other areas the role of head covering traditionally performed cap, beaded.

Apparel Bashkirs, who servedgifts, had a sign symbols. The bride before the wedding were presented by her future husband a shirt, collar and sleeves which she previously embroidered. In the appendage she handed to the groom skullcap and woven pants. The colors of the wedding dress meant a lot, so traditionally used bright shades of red, blue or green. The groom at a wedding girded cummerbund red, but for the Bashkir bride shilsya belt of bright patches.

Traditionally, the wedding and the birth of Bashkirhealthy offspring were considered works worthy man who cares not only about his personal happiness, but also on the proportion of their people. If before the celebration was held on a grand scale and lasted for several days (and sometimes weeks), then the modern Bashkir wedding held much more modest, without complying with all the traditional rites and with the lack of a generous dowry.