The Armenian nation cherishes its culturalheritage, so many traditions, rites and sacraments preserved from the times of the past. One of the biggest traditional events in the life of an Armenian wedding is considered as the soul of lovers forever connected by marriage. Armenian wedding - a splendid festivities, keep the spirit of ancient mysterious. They celebrated a few days pass with fun, dances, songs, fabulous table, a variety of guests.

The choice of the bride

Previously, many years ago, we chose the bride closerelatives of the groom or special mediators (dibonchi), aware of the girls available in the territory of Armenian village or town. The defining criteria for selection of the future spouse was considered money of wealthy parents, providing the size of the dowry, family social status and connections, as well as betrothed Health - Beauty came out in second place.

It happened that the men went against the willrelatives, picking a girl, according to the parents the wrong - then they were deprived of material support of the family and respect for society. Armenian modern weddings are different - are now young people can themselves find a matching pair, asking permission of the father and mother in a tribute to the old tradition. However, some men are not against the fact that they have picked up the bride's relatives or dibonchi. 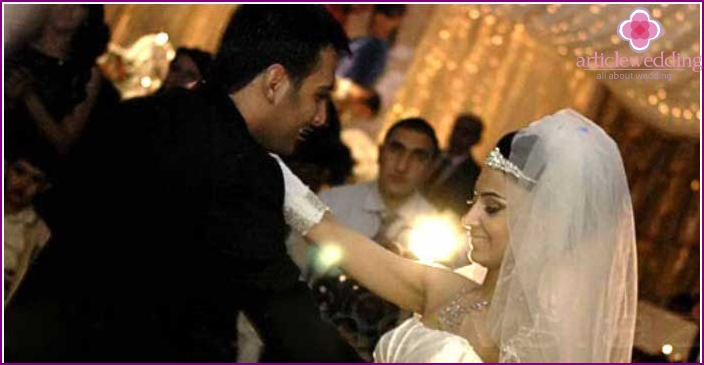 Armenian matchmaking - this is an important stage of preparationfor the wedding. Now it is more of a game character, but the solemnity and accuracy of the event is almost not changed. After the young man told the betrothed of his intentions, and received the consent of the wedding, he should inform his mother the news. The bridegroom's mother conveys good news to her husband, who immediately begins to search for the matchmakers, matchmaking and training.

The number of matchmakers may include women or men,they necessarily accompanies the mediator who is familiar with both families. Family girls are well prepared for the arrival of the groom's messengers - my father and mother called a few close relatives, lay the table. When the two men come between families maintained a conversation without any hint of the real purpose of the visit - the weather, nature, health, politics. Then the mediator or one of the messengers said:

- We ask for your daughter's hand for our men.

Sometimes family members are not shy in more poetic terms:

- We want to take a handful of soil from your garden.

The first arrival matchmakers decided to refuse. Only after a second or even third visit, the father and mother of the bride, with the agreement of not only girls, but all the relatives who have a voice in the family, agreed to conduct the wedding. After this, a bottle of cognac and begins a fabulous table.

The table on the courtship before the Armenian weddings looks interesting: 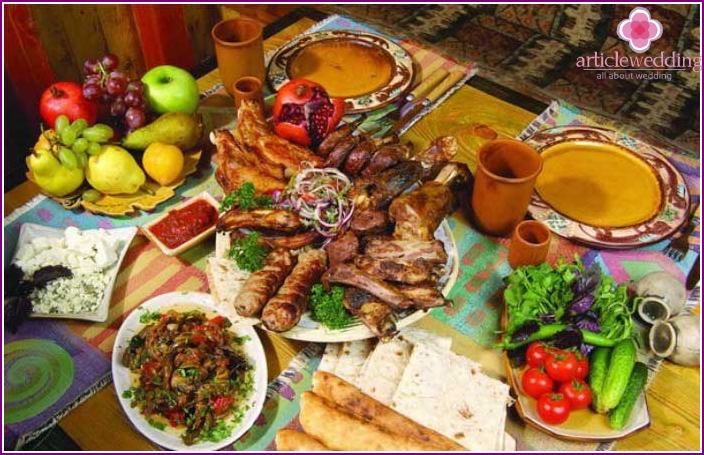 During the meal are discussing the upcoming wedding, some pre-wedding events. Guests say toasts, prorochaschie happy life of the future Armenian spouses after marriage.

Continue the tradition of Armenian weddings willcover the same table (or even better) the relatives of the groom. During the feast discussed details of events or issues that have not had time to discuss the last time. A few days after the head of the buffet the groom's family (usually the father) is sent to the bride's parents to discuss the day of betrothal and invited guests.

Betrothal - almost the same scaleevent, as are the great Armenian wedding, so are its preparation seriously. An important role is played by the father planted - cavourite, which would later become the godfather of children bride and groom. To begin with all the guests gather in the house of the groom's family Armenian - usually invited many friends and relatives. They try to present a few dishes, then with gifts and treats stacked on large trays, are sent to a narrowing of the house.

Before the threshold of her future husband's father and head of the newfamily gives him a ring, chain, bracelet or other jewelry, called Nshan (Armenian engagement gift). Wife cavourite takes a bride, after which the bride gives her Nshan. When Armenian gala held custom, young guests enter the house where they were waiting for a great meal, serving a variety of dishes, drinks, and after all the dancing, having fun, hold contests. After the fun and feast with his father cavourite stipulate future spouse on your wedding day.

How is the "rite of cutting the bride's dress"

This rite is always accompanied by a vintage wedding,As a rule, during the days of betrothal, and is being held a few days before the celebration or not performed at all. On the day of cutting the bride's dress to visit her fiance sent to relatives of Armenian females - mother, sister, and wife cavourite, bought special otrez for wedding dresses.

The essence of the ritual - the wife begins to cut cavouriteArmenian outfit for the girl, then stops abruptly, saying that blunt scissors to cut them - great work. The woman does not continue cutting until then, until she did not pay ransom. After a small fee that is taken again for the cutting. After that, all those present are treated. 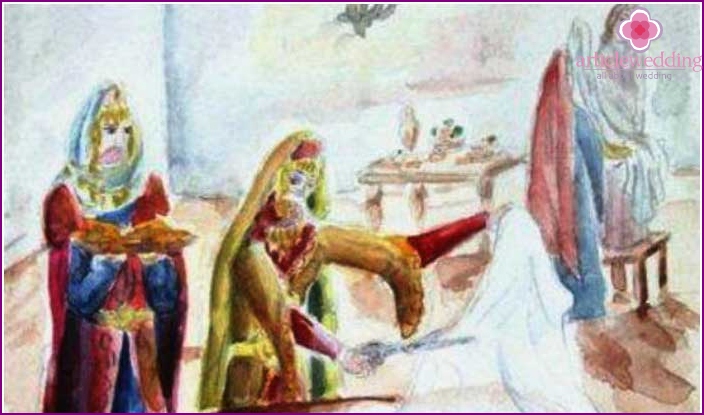 Before the Armenian weddings, there are several other rites, customs and necessary cases.

After these small rituals comesmaterial preparation stage of Armenian weddings. Organizers are seeking premises, purchase decorations for celebrations, preparing a festive menu, a large number of invited guests, drawing holiday program, agree to the Church about the wedding, which is necessarily done during beautiful Armenian weddings before the official marriage. 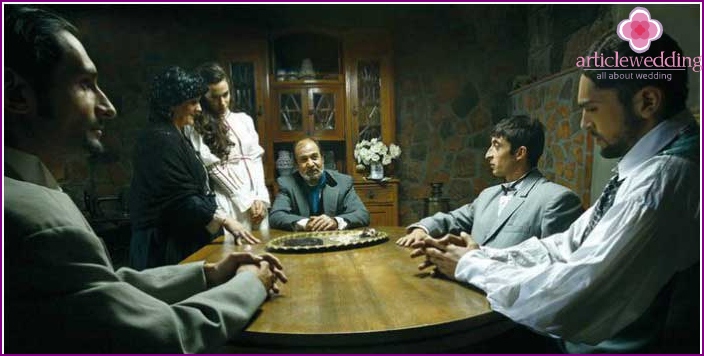 The solemn toast is one of the mainArmenian ornaments modern weddings. They tend to be poetic, beautiful, intertwined with ancient Armenian parables. Armenia - amazingly beautiful country, so many analogies and metaphors related to the surrounding landscape, natural phenomena, for which many centuries the Armenian people watched.

Field-scale feast, which earliershe did not take anything on the tooth and did not speak Armenian groom dancing their traditional first dance. The music is playing, it goes into the center of the hall, the guests are dancing around it and put the money in her hands, forming a coven. Also, Armenian brides made traditional dance number at the wedding as a gift to her husband - is beautiful solemn act.

Watch the video, where the beloved dances for her betrothed Armenian dance:

Weddings in Armenia does not end one day, usually a celebration lasts three days. After celebrating the wedding held a few Armenian rites and customs:

Armenian wedding - it's a great beautifulholiday that will leave impressions to all who are lucky enough to participate in it. Energetic traditional dances, lively music, happy couple, royal feast - long event is an unforgettable memories in the hearts of visitors, and stunning photos remind us of this day the couple.