Armenian wedding is interesting that the ancientWedding traditions alive to this day, although has undergone some changes. All wedding Armenians carried out in strict compliance with the historically formed canons. These people are kind to this event: Armenians ready to pay every last penny for the happiness of the young. Armenian wedding traditions unforgettably bright and colorful, and the wedding - simply enchanting holiday with games, contests, redemption.

Marriage in Armenian families have long consisted strictly by seniority: not yet married the elder brother, had no right to start a family the younger. There were a number of prohibitions on marriage:

According to the Armenian canons adopted children and godfathersalso considered blood relatives, the general prohibition applies to them. Therefore, it can not enter into marriage is not only between themselves godfathers, but also among their descendants.

According to the historical tradition of the Armenian bridechosen from his home or in the nearby village or town. The Armenians did not marry more than three times, the third time only married the widow. There were instances of deviations from generally established Armenian wedding traditions, but they sharply condemned by society.

For Armenia, it was previously characterized by early marriage. The girl was considered ready for marriage at the age of 12-16 years old boy - in 14-20 years. Under 17 years old she was already an old maid, and after 20 years it was called overripe. Traditionally wife had to be younger than her husband for several years. The age difference between the young could reach 15 years. Armenian young man trying to marry immediately after the service, and the girl to marry after graduation. 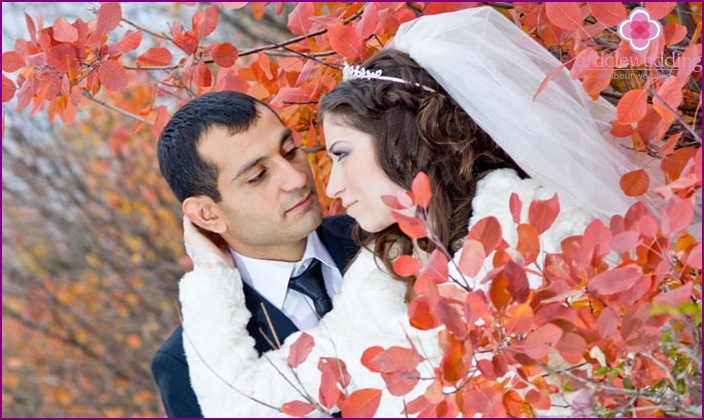 By tradition, the wedding itself was a major factor increation of a new Armenian family and the official registration of marriage was made after the birth of the child, and therefore was considered as a matter of secondary importance. If the couple remained childless, the relationship between the two remained legally informal.

When the Armenian guy with a girl loved eachother, and parents, for whatever reasons, did not want to bless the marriage, the young simply ran away from home. Marriage Armenians was considered unbreakable, divorces are extremely rare, but the reason for the divorce could be the fact of adultery.

The main Armenian wedding traditions,formed many years ago, can be called "arranged marriage" and "bride kidnapping". Previously, these traditions are strictly observed, these days they are not so relevant, but still exist.

Opt for your favorite girl,Armenian parents of the groom are preparing for matchmaking. They choose the mediator in the negotiations with the future matchmakers one of his close relative. The objective mediator - to obtain the consent of the father of the bride for the coming marriage. While staying mediator in the house of the bride, the groom traditionally hanged at his home on the pole comb or large spoon. Upon learning of the intention to get married guy, the girl's mother first consulted with his brother.

Main matchmaking traditionally occurred througha few days, the date specified in advance. Home to the bride's parents were men - close relatives in the male line, with their mediator, and sometimes the groom's mother. The sides exchanged the usual greetings, talk about absolutely extraneous things - politics, the weather, the harvest, and then in allegorical form by a variety of proverbs and sayings reported matchmakers, why they came. For example: "We came to scoop up a handful of water from your river in our river."

Proposal for Armenian tradition never matchmakersnot taken immediately, even if the bride's parents agreed. They found a reason to delay the time, saying that they need to weigh everything, to think. Swat had to walk so many times. 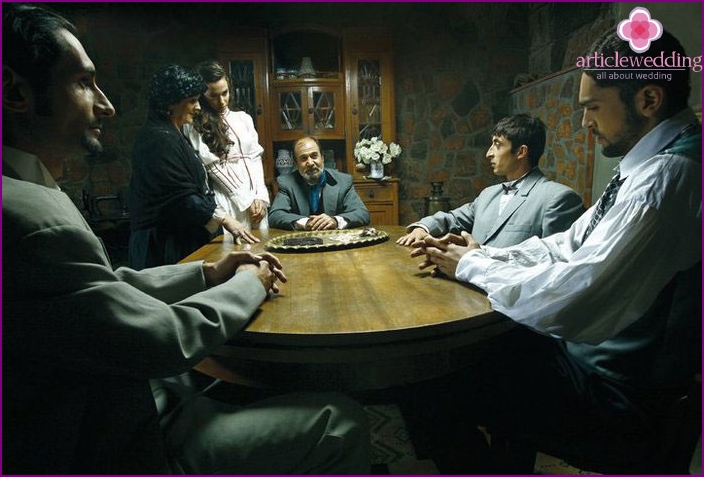 His positive response to the bride's father,talking with relatives, asking the consent of his daughter, as expressed in allegorical form: "Let's not argue, let our turtle dove flies in your garden." This time the Armenians have called the official collusion, it is tradition necessarily fastened gift - a ring or other jewelry for the bride. After that, I set the table, drinking wine is born matchmakers.

Many years ago, among the peoples of the Caucasus,including the Armenian people, was widely distributed, "arranged marriage", and could get engaged infants, young or even unborn children (so-called "engagement of cradle"). Parents who want to become related through many years, entered into an arrangement, which was recorded by the fact that the girl in the cradle was hung a piece of silver or gold, and sometimes on a cradle makes a mark.

This tradition was banned by the Armenian Church,insists that nobody has the right to marry children until it is not their will. If children are in adulthood want to create a family with other people, you can not keep them. When the priest still held a wedding, betrayed his punishment. But the people do not even admit the thought that such a marriage does not take place. Gradually, the tradition "of cradle betrothal" began to lose popularity towards the end of the twentieth century it has completely disappeared.

Arranged marriage as the Armenian wedding traditionstill exists today. Narrowing the Armenian Man choosing his parents, a specific role for the groom's mother. Took a fancy to her favorite girl, she consulted with her husband, brother and other relatives. The family has gathered all the information about the girl, her family.

The positive qualities of the bride were considered:

Outside the girls did not play a big role, as long as she was a good wife and a mistress. About her character and prospects judged by the mother. What is a mother - so when something is her daughter.

Armenian wedding tradition coped laterautumn or winter, after the harvest. The protagonists of the wedding celebrations - planted father and mother ( "cavourite" and "kavorkin"), the dummy groom groomsman ( "Azab"). Chief boyfriend called "azabbashi" - "brother of the groom." From the bride's actors - her brother and sister. For conducting the wedding festivities necessarily invited toastmaster, who proclaimed toasts offers guests sing, dance.

The owner of the Armenian wedding was considered the father of the groom. The wedding lasted from three days to a week, it depended on the duration of the economic opportunities of young parents. It began on Friday and ends on Sunday. Armenian wedding includes a number of interesting ceremonies. One of them - a prenuptial swimming newlyweds, symbolizing the cleansing:

The ritual bathing of the bride was emotional, solemn, accompanied by songs and dances.
Another Armenian tradition - wedding cakesof bread. The bread baked at home at the groom and the bride. Friends under the sounds of songs sieved flour, kneaded the dough in special wooden troughs, making bread. 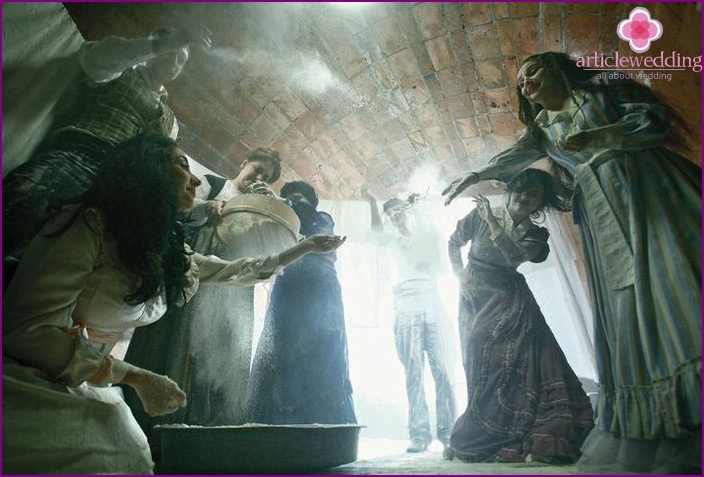 It began unusually Armenian Wedding -simultaneously in both homes. When guests of the groom, were treated to plenty, they went home, the groom in the wedding entourage, accompanied by musicians and went to the bride and led to a bull, decorated with a garland of apples. At the wedding tradition of bull slaughtered under the sounds of music and ritual dances, and his blood-smeared bridegroom forehead.

Groom wetted with blood bull knife or dagger,He folded it and put it in his pocket. Opened only a knife in the marriage bed. Since the bull by the Armenian tradition is considered a symbol of fertility, the wedding ceremony was to contribute to a strong family, the birth of many children. 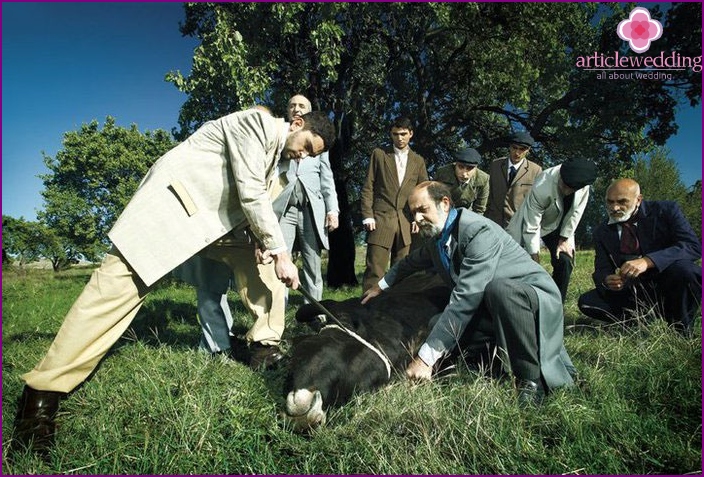 Leaving the house of the groom, the procession goes to his futurewife, carries a tray of her wedding dress, and the bride herself, according to ancient tradition, sits at home in a corner of the room for a special curtain. Relatives at the gate demanding a ransom for her. After the groom get to his beloved, he started the wedding feast, which lasted several hours. Then the guests went home, and the groom with the main groomsman stayed overnight. With the bride as her friend slept.

As in our time comes Armenian bride for his intended, refer to the provided video:

The next day began with a wedding dressingBride behind the curtain. Girls wore at her wedding dress for the sad melody of the Armenian zurna. It was little different from the everyday, except that was sewn from expensive fabric. Face of young closed veil. Look at the photo, she is charming! 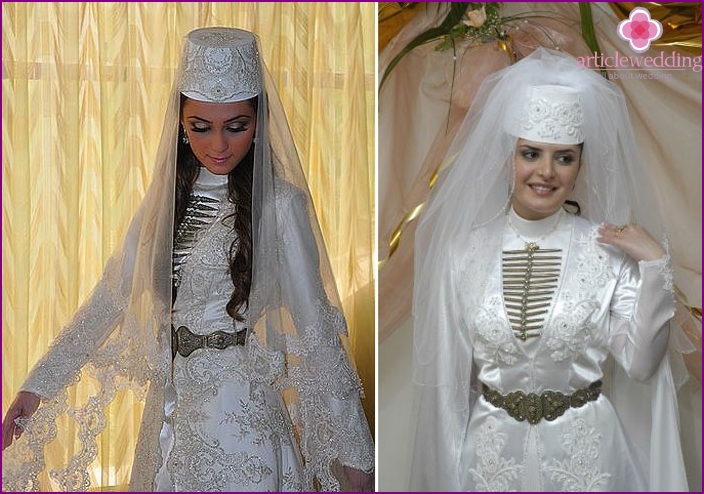 A married man with children, the findings of the bride and placed next to the groom. He wanted a pair of family happiness, good health, a lot of children. 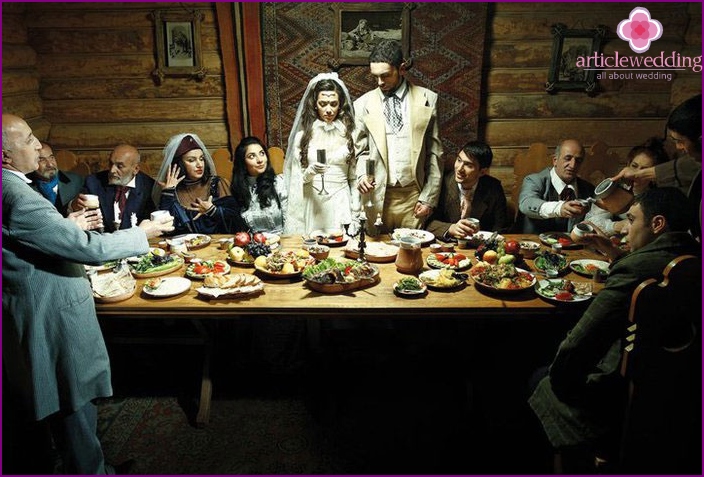 Newlyweds necessarily had to go through a wedding ceremony without that they had no right to lie on the marital bed. 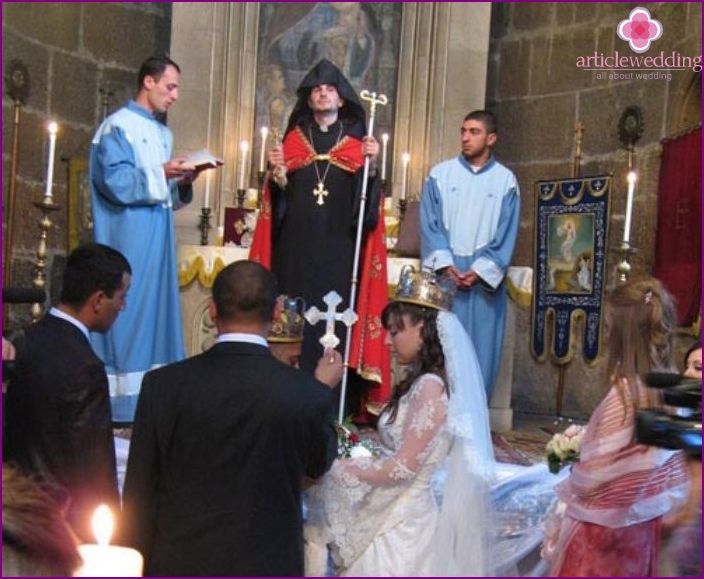 On the third day of the wedding future wife transportedhome to the groom. In the morning, he and his family went to the narrowing. The bride's father's daughter passed from hand to hand future son, punished cherish it. The young wife said goodbye to the parental home under the sad songs, and then together with a dowry to go home to the future husband. There they were met by relatives: the Armenian tradition, they were thrown on young corn, candy, nuts, small money, symbolizing prosperity and happiness. 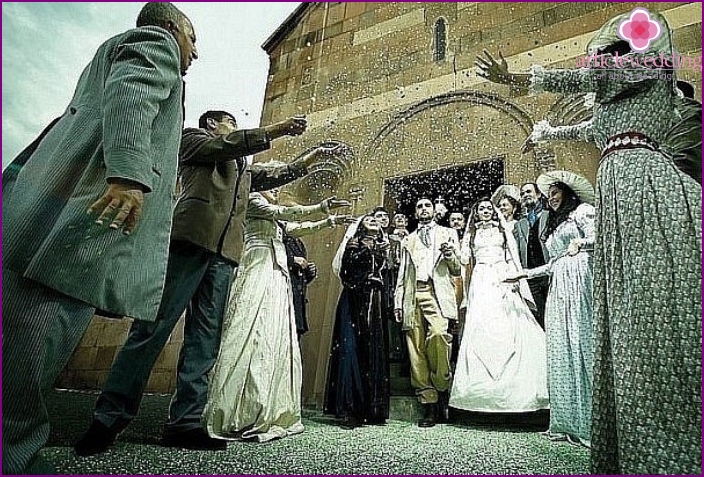 Dowry of the bride in some regions of Armeniatransported after the wedding. Departure dowry - poslesvadebny rite. The second rite - wash the bride's head. Exactly a week after the wedding, first home to the mother in-law comes to his young wife. It carries with it a casual clothes, comb, soap, towel and her daughter helps her to wash my hair. In the old days this custom is strictly observed, the mother could not see his daughter until this day. Now he has a symbolic meaning.

If you are lucky enough to be a guest on the Armenianwedding, you will never forget the true originality and finesse of this event, as well as the entire Armenian culture. Share your impressions in the comments, tell us that the most liked members of any of wedding ceremonies you've become.