To amuse the guests at a wedding party andgive help to ease the atmosphere of the competition, during which all the guests will be engaged in determining who will be born in the young boy or girl.

Rules for participation in the contest

Leading invites everyone to the table to take part in determining the firstborn. There are several variations of this popular contest.

You will need two pairs of sliders - pink andblue. Pink sliders issued bridesmaids, and blue - the groom. Guests of "The Voice" specie (specie) or paper money for the boy (girl), and put the money in a matching color sliders.

Iron coins and fines weighed heavier sliders will be an indication of who will be born at the newly minted spouses: the future man or a beautiful girl.

In the case of banknotes required count - sliders, which amount is more "win".

A variation of the classic contest with sliders- The use of strollers, bibs, bootees or baskets of blue and pink. They folded bills everyone "Vote" and announce the result after witnesses: what sex the baby will be born in the young. 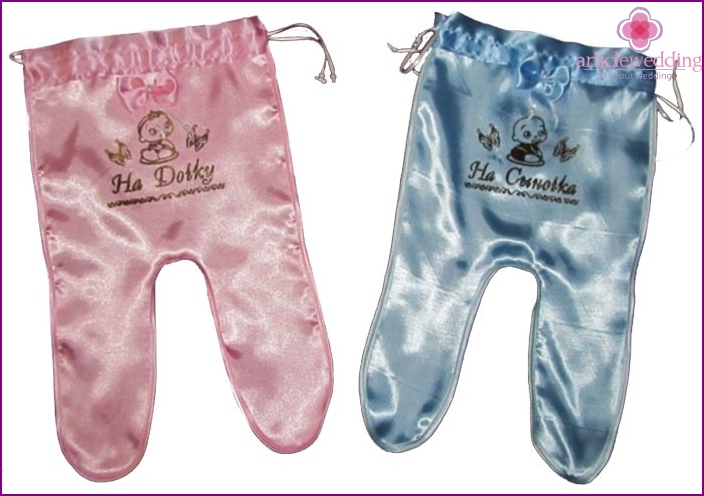 Helpful advice: Wedding fun competition will be held, if:

Guests need to do one of the following:

Leading distributes two bow out of colored paper(Pink and blue) each at the table. One of the witnesses, collects the "voice" in a special bag, then calculates which bows more. The objective remains the same - the sex of the baby determines the greater number of ribbons of the same color.

The two large-capacity sprinkled chopped cabbage leaves, put on a pacifier. The contents should be carefully moved under the cover.

Two teams are looking for witnesses to the speed under the nipplecheerful music. If the first team to find the nipple bridesmaid, baby will be born female. If the assistants boyfriend will be faster, while waiting for a young boy.

The winner of one of the teams gets a special prize - a toy. 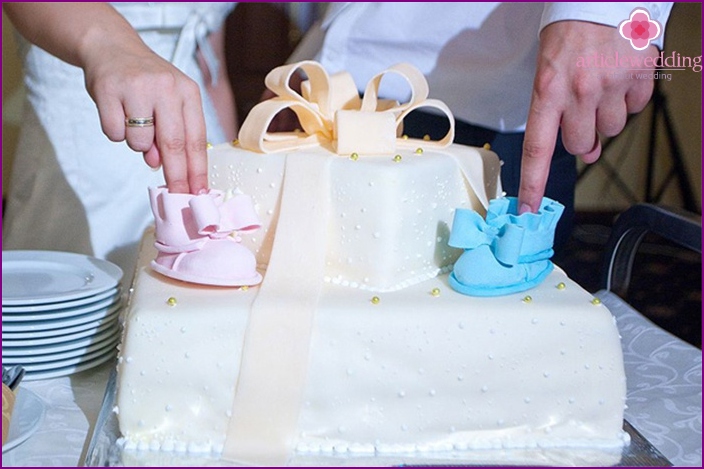 For comic determining sex of the child, you will need:

After the ceremonial announcement of the results of the auction can be made small, the main prize of which will be a bottle of champagne, wine or brandy.

Sealed in the photo or video processdetermine the sex of the unborn child bride and groom will be happy to see later to compare the results. A correctly guess the guests will be doubly pleased to feel the participation in this important event.