Redemption of the bride in the movie style

Where usually begins the wedding? Since then, the groom, along with close friends and a witness comes the bride. But because it will not give up without compensation. The more interesting bride price, the better the mood will be created among the guests will be organized. For fans of the old Soviet cinema podoydetvykup bride-style film, created based on famous films: The Diamond Arm, Ivan Vasilievich, Prisoner of the Caucasus, Operation Y and Other Adventures Shurik. 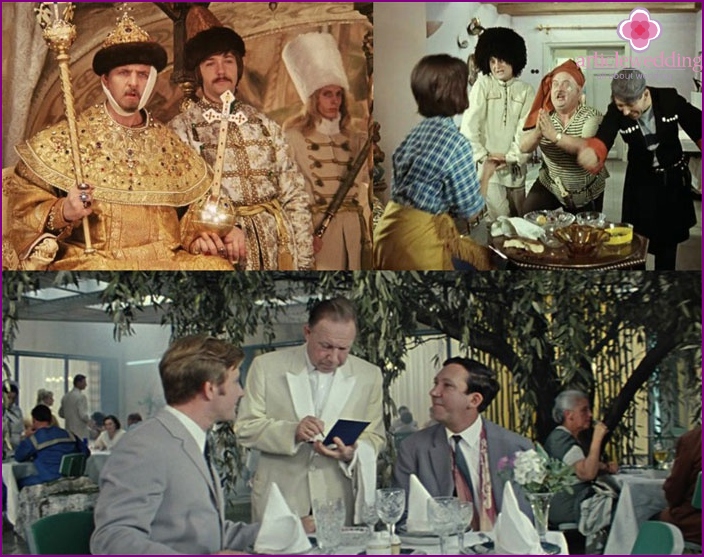 The highlight of the organization bride pricewill be writing the script and the selection of the necessary props. The task of the witness, together with bridesmaids - to think carefully about contests, test. There should be a lot, but not too much. The entire foreclosure process takes from twenty minutes to an hour, it is not necessary to delay it longer, the bride and groom waiting at the registry office. 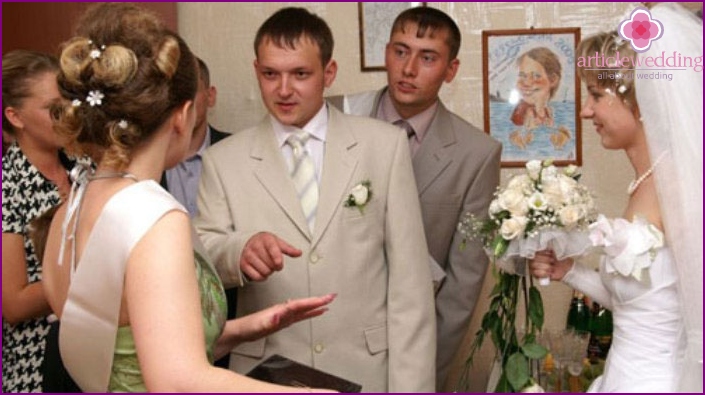 To bride ransom has become a bright, impressivespectacle, to be close to the atmosphere of the movies taken as a basis. It will help to do this properly selected props and costumes for the main roles of performers:

Roles between the existing foreclosure persons distributed in advance. Artists must clearly understand the sequence of the competitions and the task before them.

The main characters of the holiday performance:

Making space plays an important role in conducting protsessavykupa bride in film style. The room must be:

To begin to draw near the bride's homeimpromptu summer restaurant with a sign Weeping Willow, equip it with a table and chairs. On the table to put food, champagne, glasses. Next - the old tape recorder, playing music - popular songs about birds. 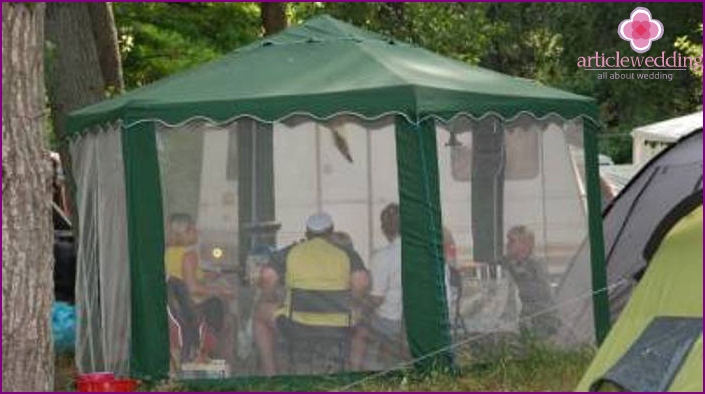 Later, the action moves to the elevator doorThere's a sign that Time Machine and continue the landing, festively decorated with balloons, confetti, paper flowers, as shown in the photo.

The final venue of the bride price - flat girl. It is also necessary to properly decorate with balloons, ribbons, garlands, streamer.

foreclosure scenario in the movie style

Every bride wants to prove that it is expensivecost to her favorite guy on redemption a little tough, but he showed himself a real man worthy of her love. Therefore, to write the script of redemption should be approached responsibly, to think through every detail, to provide for the possible surprises. Compose it with bridesmaids, even attached to the case the future mother-in-law, then the responsibility is divided at all. Use quotes from famous, loved all the movies.

Granted we have an option of redemption scenariobride is simple and accessible to memorize everything. Allowed improvisation, making the process fun ransom cheerful. You can use it fully or partially, by individual storylines.

The groom and his company drove up to the house of the bride. There's a chance it fits huckster.

- Cigarettes are not there?

- Hello, honest company! You came for the bride? Long drove the bride has decided not to marry.

Groom with guys stubbornly insists to pick up the bride.

- I do not argue with me! You late! But the boss (ie, the bride) gives you one last chance. You will make a secret operation called "Operation Redemption or other adventures." Do you agree? Then we will carry out the restaurant Weeping Willow, where it will start.

All are suitable for restaurants, simulate right outside the house. For the covered table sits Semen Semenovich Gorbunkov, listening to a song about rabbits from the movie The Diamond Arm.

- Semen Semenovich, you have a conscience? It's a shame something like, still morning!

Witness introduces Gorbunkova with the groom.

- Good day, young man! Are you looking for someone? And let's have a drink, I have a toast to the acquaintance!

It fills the glasses, all drink to our acquaintance.

- Listen, and I will not find out immediately! Why are you a mustache shaved off, Durikov?

He asked the witness:

- Why Volodya shaved off his mustache?

The witness says something.

- Sorry, oboznalsya. Why are you so smart today, probably thought up to get married? Why do you need it? Now we check!

On the table lies utensils, invisible to her sideattached label: "I like crazy," "We must, Fyodor, right!", "I demand the continuation of the banquet", "Komsomolskaya Pravda, athlete and just a beauty", "The girl has his own apartment."

The groom should be called right version ( "I like crazy"), then turn the bowl and read. If you did not guess, he pays the fine.

Gorbunkov pretends to be quite drunk:

- Well, I'm tired of you, very hungry! Let another 150 probably and a bite. Witness, game!

The witness is confused, does not know where to get the game. There is just suited to the company huckster, he opens his cloak and said quietly:

The groom with the witness, bargain with the huckster, buying chicken and gives Semen Semenovich. He answers:

- Thank you, guys! And you, the bride, I wish the family well-being. How will we have in the Kolyma - welcome!

- And we move on. Now I'll show you the attraction of this house. One of our residents has created a time machine. Let's experience it.

All are suitable for the elevator. The groom with the witness and cameraman rises elevator a few floors above. The rest are on the ladder. The elevator door opens, they see Ivan the Terrible. King: 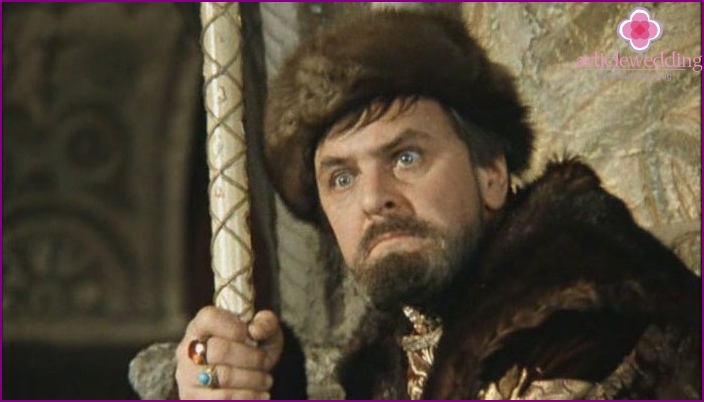 The groom is justified, that they are not demons. Knotted conversation.

Groom him something responsible. Then fit all the other guests. King with all the shakes hands:

- There is a small problem. Our time machine deteriorated transistors. Here's how to get here Ivan. You just need to find a new transistors to send the king in his time.

- Something I was plagued by vague doubts. In Shpak missing tape, the Ambassador medallion.

- You're hinting at, the royal face?

After haggling with the witness the groom buys transistors and pass the witness.

King hands him a bottle of vodka and glasses:

- Lepota, anise vodka! Come on, pour, drink to your boyarynya! 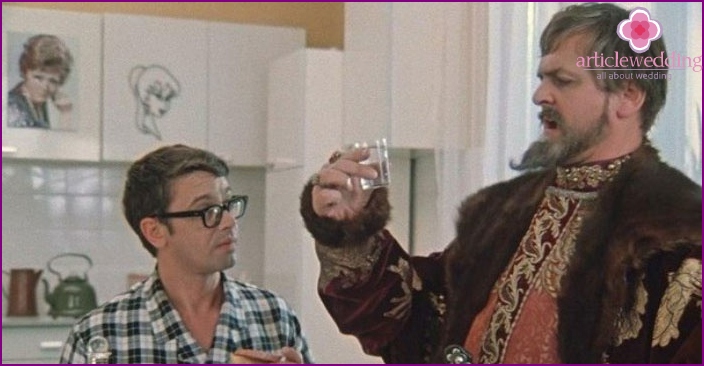 Groom pours, gives the king the glass. He cautiously:

- Ispey you from my first cup!

Bride drinking from the cup of the king.

- Your documents? Did you know that drinking alcohol is prohibited in public places? 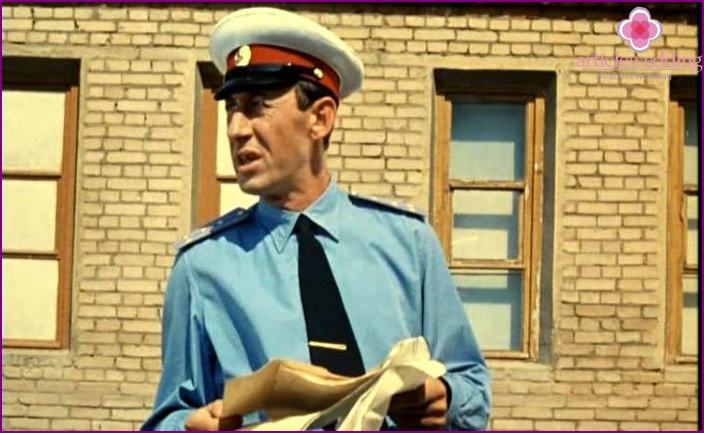 Groom argues with them proves that they are at a wedding.

- Good. Then be so kind to answer some questions.

The police asked the groom questions:

- Bride lives in a flat?

- What she graduated from high school?

- What kind of dress worn in the bride prom?

When the wrong answer the groom pays the ransom.

- Well, everything is clear. We must take this groom for fifteen days. Come with us.

Climb the floor above.

- So, fellow alcoholics, parasites! Would you like to work? There are several objects for you.

- Grounds maintenance - two people. Wine Distillery - nothing. Construction, here and there you go! Will you build a house for a young family! 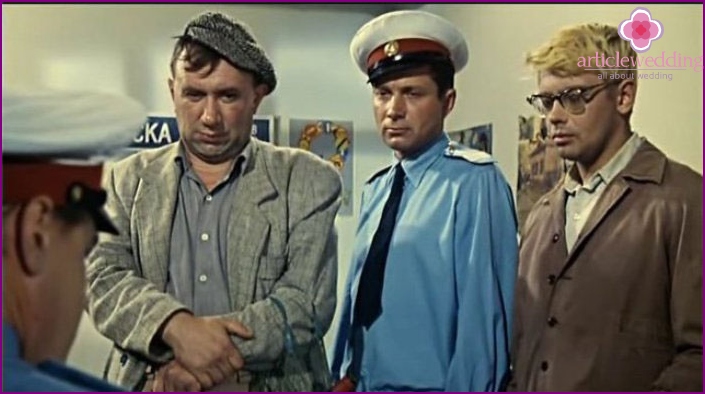 Bridegroom provide playing cards with his friends he had three minutes to build a large house of cards. If successfully constructed, they are passed on. And if a house fell down, paid the ransom.

All are suitable for the bride apartment. There at the entrance of their meets girl Lida and the groom says:

- Hello! Tell me, with you so it happened that the first time you enter the apartment, and you feel as if you've been here? All the familiar - the furniture, the smells. Prove that you are the person for whom claim to be, then I'm comin you further.

The groom blindfolded and allowed to feel different things, he must guess them. For incorrect answers, he pays the ransom.

- What do you do with a girl from the apartment? (Love)

- What you create today? (Seven)

Lida admits all the bride's apartment.

girl sitting in the room in a burqa, with her two horseman.

The first horseman shakes his hand, but quickly pulls her from the pain.

The second horseman Nikulin repeats the gesture of the film "Prisoner of the Caucasus".

Girl in a burqa:

- Look, the groom! Your bride stolen. For it requires a large ransom - 20 sheep and a new refrigerator. If you do not give a ransom, then marry me! These are my brothers, they are in Russian do not speak, but everyone understands.

Horsemen nod. One of them says:

- You brought gifts for my sister?

Groom giving a candies and champagne.

- If you do not want to marry me, he'll slaughter. Joke!

- I liked you. We'll have to help you. I love music. Who will play my favorite song, and you'll need a witness to dance for me.

Groom and witness are dressed up in oriental costume, includes the song "If I were a sultan." Girl, singing, dancing along with them.

After this test allowed the groom to the bride's room. Redemption ends.