Redemption of the bride in style Mafia

Mafia style - a perfect theme for the weddingcelebration. Courage, danger, chase, the adrenaline and the obligatory happy ending with the absolute victory over all enemies, will create an indescribable mood of the wedding guests. An excellent beginning would be a wedding celebration bride price in the style of the mafia, which from the first minutes will take all participants 20-30 of the twentieth century and make you feel like a real mafia. How to organize a ransom mafia gangster to create the atmosphere?

During the preparation of redemption, organized inMafia, special attention should be paid to script events, which often depends on the success of the wedding celebration. Think about the main plot, distribute roles, create a gangster costume party, write and rehearse conversations, pick up props, then the bride price will take it easy, fun and unforgettable experience for wedding guests.

For the mafia bride price, you will need:

Suitcase used in many competitions foreclosurebride, so choose a comfortable model with a combination lock. In order to give it a vintage style, we recommend to paste over the outside of the yellowed newspapers. Newspapers easy to wear out with your hands, soaking their instant coffee and then dried.

During the competition, hide in a suitcase shoethe bride and the groom chooses to let the code it, or use it as a store of money and jewels mafia. To make it funnier, currency notes, take a large size. It may be money mafia clan with a portrait of the bride, fake dollars or other kind of fake money.

Darts or toy guns with pellets, as well as balloons, you will need to check the accuracy of the groom, holding the music competitions:

Table covered with beautiful green tableclothUse to simulate gambling casino table. You will need a deck of cards, poker chips, as in the photo. Suggest newlyweds draw one card, calling the dignity of future spouses, or on each card write the memorable date, let the groom guessing its value. The prize - a poker chip, which is then exchanged for a hint for the next contest mafia ransom. 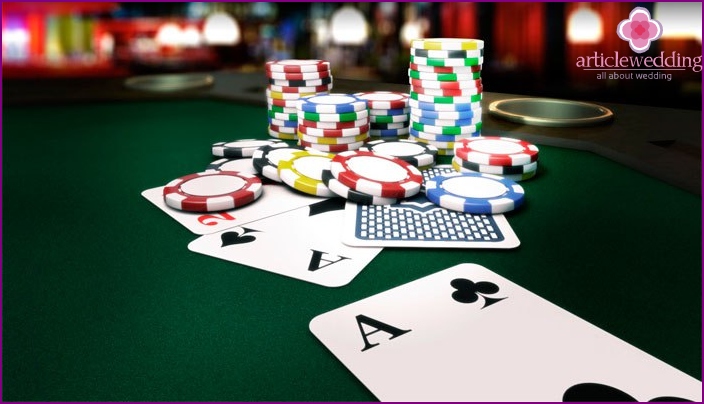 Boxes for collecting money in the style of the family do the bride's clan bank. Use it to collect fines for losses newlyweds.

Participants include two clans - families of the bride and groom, which later merged together. To the event it was like a gangster film, using a special terminology of the Mafia.

The role of the head of the bride's family clan plays a dadSuite, from family newlywed bride takes this role. Consileri play on both sides of the newlyweds witnesses, other roles are distributed among the bridesmaids, groomsmen. To give credibility redemption mafia names of the participants make "Italian". For example, Alexander - Alessandro, Anton - Antonio.

Gangster costumes for the bride price in the style of the mafia should be comfortable, so that participants can move actively during the event.

Options outfits shown in the photo below. 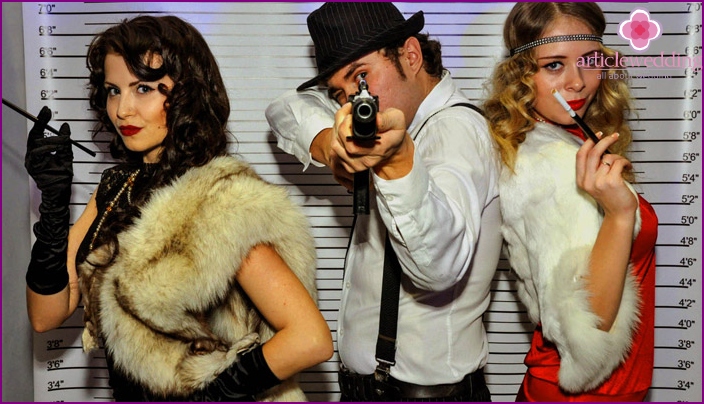 Redemption takes place outside the entrance, the staircase or directly in front of the door of the apartment where the bride lives. It should be the venue to give the room style gangster movie.

When making a room in the style of the mafias release your imagination, dream heart's content. For example, use the boxes as an impromptu mini-bar to the bride and the guests could enjoy a glass of whiskey or other alcoholic beverage, successfully passed a competition. 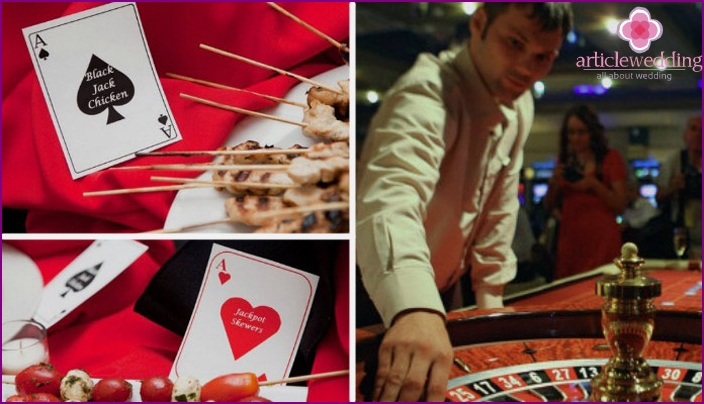 We offer you a ready script redemption mafia.

Near the entrance to the groom's entrance, guests are greeted by two presenters, dressed in the style of a gangster movie. Leading welcome the groom and his mafia family:

- Bonzhorno! We Petruchio and Fernando, why are you here?

The bridegroom answers that came for the bride.

- Heard heard. Sylvia (bride's name) - Beautiful Bride city, the only daughter of the head of a mafia clan Miltado (bride's name), which is worthy of the hand only bold, brave, courageous, wealthy bride!

- Don Sony Visconti gave us a long list of advantages, which should have a husband incomparable Sylvia. Free does not show! How many are willing to pay for secret information?

There is a trade. Fernando continues mafia bride price:

Pulls out a sheet of paper, it reads: 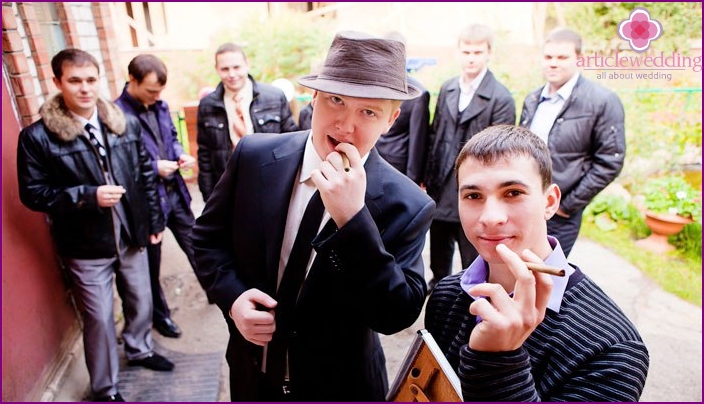 - You see how complex, almostmakes impossible demands mafia Don Sony Visconti. I personally just can not pass the tests. I continue to train, not losing hope that one day I will achieve her hands.

- Dear Don Sivan (groom's name), we can notyou miss until you prove that he is worthy hands daughter of a wealthy clan mafia of our city! If you pay, we will help you pass the test. How much to our services? Willing to pay?

- The first on the list is the word "courage" meansMafia to kill the villain. You're lucky, Don Sivan, yesterday we took a hostage approximate mafia Don Marino - the main competitor of Don Sony Visconti. Ready to get rid of a competitor?

- Petruchio, an outstanding Don Sivan weapon, and I'll go for a hostage.

- You know how to handle weapons? Not disgrace? The murder of the mafia - dangerous test stand only a brave, brave warrior!

Groom says the lead in their abilities.

- In words, you - experienced gangster, but skillsenough. We recently took a mafia warehouse with the latest developments weapon, if well paid, then selling a gun that shoots accurately, without a miss. I agree? What is ready to give money?

There is a trade for a toy gun with plastic pellets. Fernando returned, leading to a hostage-gangster from balloons, as in the photo. 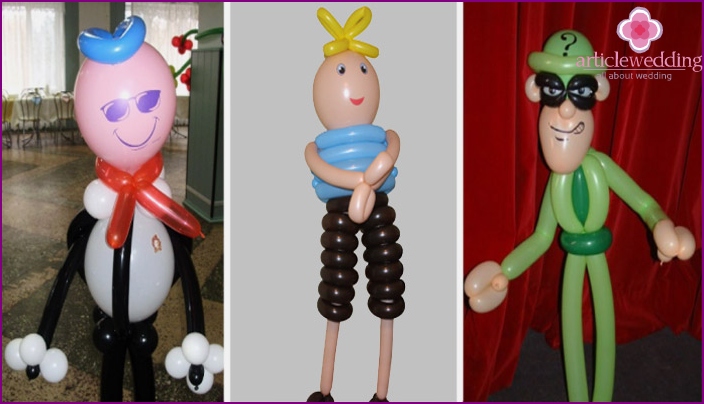 - Here's our villain! Caught a long time, all managed to escape the raids, angering the head of a mafia clan. If you kill him with his own, then Don Sony Visconti recognize you brave gangster, give favor.

- Fernando, villain tie to a tree, and we will depart with Don Sivan 10 steps

Then he explains the groom:

- We need to get there a few times in the body and make a shot in the head. If right, then prove that he is worthy of the bride hands - beautiful Sylvia.

Groom has successfully fulfilled the task of bride price, after leading the competition offered by skip a drink of whiskey for the bride's health.

- The next trial on the accuracy you need to knock on the target 10 of 10 Petruchio, bring and put the target. And you, Don Siwan until you tell if you know how to shoot well? How many knocks?

Groom tells of his hit.

- Impressed you my story! Similarly, you will pass the test, only the cartridges now the road is free, I can not give them to you. Our consigliere my head blown off, if I squander the wealth of the Mafia clan. We'll have to buy cartridges. How many will pay?

There is a trade for a toy gun bullets,another leading prepares competition - hangs target counts 10 steps, draws a line on the pavement. When preparing the test, and trading ended, the bride begins to shoot as long as the job does not fulfill completely the bride price. Additional cartridges groom buys. After the competition present drink to the beauty of the bride. 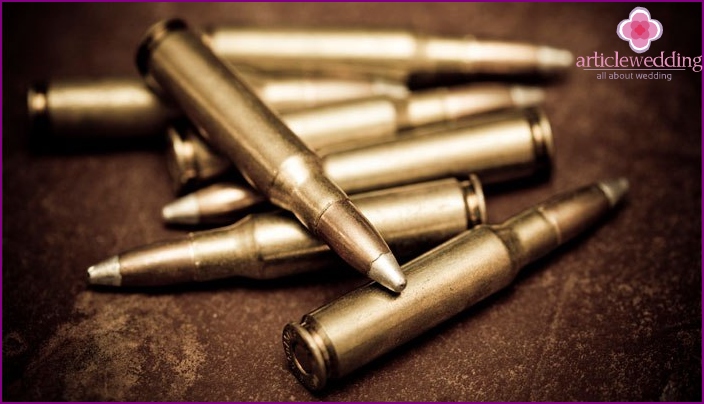 - Don Sivan, you proved to us that a brave, well-aimedgangster, but how are you doing with wise? Quick, tenacious mind - an important quality for the head of the Mafia, the third item in the list mafia Don Sony Visconti.

Moderator asks questions to the groom:

If the groom is difficult to answer, for every tip or leading question leading pay. After the test, all passed a glass of whiskey for the beauty of the bride.

- Don Siwa, check how much you are cunning. A month ago, our natural enemies have stolen the bride's jewelry peerless Sylvia, locked them in a safety deposit box, changed the code lock. Safe prompted us back, but we can not solve the code. You open a safe, then we put in a good word for you before Don Sony Visconti. Ready? How many will pay for a hint?

There is bargaining, the second brings a safe lead. The code is composed of the numbers associated with the bride: her birthday, years, height, shoe size, waist size, etc. Successful completion of the contest bride price marked whiskey. 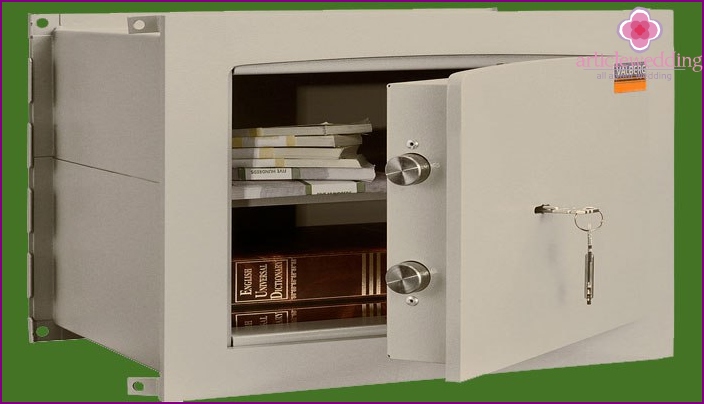 - The last point demands mafia Don Sony Visconti - to get the key to the apartments of the bride, of incomparable Sylvia. Fernando, bring the balls!

One leading out of the props, the other explains the conditions of competition to the groom:

- Note the word "key" is in oneballoon, in other spheres the amount that you must pay to the treasury of the mafia clan. You have to burst balloons, until you find a key or do not run out of money. Ready? A lot of money has taken with him?

Leading brings balls, groom eats them with a pin until it finds a note. At the end of the competition he is awarded the key to the apartments of the bride, all drink a glass of whiskey.

- Don Sivan, you have proved that he is worthy hands beautiful bride Sylvia, we will inform the mafia Don Sony Visconti of your visit. Let's go to!

Leading, groom, guests enter the entrance of the house, go up to the bride. In the house they are greeted by the bride's father gangster suit sitting in an armchair, surrounded by bodyguards. 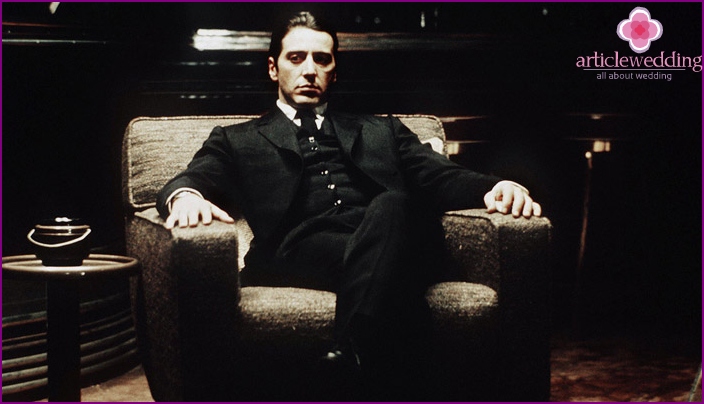 - Dear Don Sony Visconti granted to youDon Sivan - the head of a mafia clan Mifito (groom's surname). He says he wants to marry the beautiful Sylvia. By your order we tested his skills on the list: the courage, accuracy, intelligence, cunning, agility - all tests passed successfully, was generous with us, did not spare a penny.

Father of the Bride:

- If Don Sivan is so good, worthy to befull member of the Mafia family, then let him come, to explain why he wants to marry my only daughter? Then I finally decide whether it is a suitable candidate, or will need to get rid of bridegroom quietly.

The groom comes to the bride's father, he tells the story of how love, appreciate, respect for his future wife how will take care of it, etc.

Father of the Bride:

- I bless your union! Truly you are worthy of my daughter's hands! Come, bring happiness to the bride!

Under the solemn sound of music all presentgo to the bride. The groom presents the bride wedding bouquet, champagne is poured, the couple receive congratulations guests, all celebrating the successful completion of the bride price.

Redemption-style Mafia - a good base for shootingwedding video, featuring the main characters of the holiday parties - bride and groom. If the script is well laid out, the costumes match the style of the event participants, rehearsed speech, we get an interesting thematic video, which will delight you long after the wedding.