The wedding was at all times, along withthe birth of children, the most important date in the life of a woman. It is logical that dress for this solemn occasion tried to make appropriate. Interestingly, the wedding dress before could have any color - is not necessarily snow-white. A style is often very different from the usual us. Let's take a tour of the history of wedding dresses - from the Middle Ages to the present day.

What dresses dressed for a wedding in the old days?

In the Middle Ages the representatives of the authoritiesFamilies often do not marry for love, but for political reasons. It is understood that the girl at the wedding was supposed to look simply stunning, because in her honor and was evaluated along the wealth of the entire family. Then sew wedding dresses used exquisite and expensive fabrics - silk, satin, tulle and velvet, are generously decorated with gold thread embroidery, valuable fur.

In accordance with the mores of the period, costumesIt was closed and the hems of the sleeve and have a maximum length. Paints that era were made from natural ingredients, so bright colors (red, blue, pink) were able to afford only representatives of wealthy families. Dresses same natural "earth" colors were widely used rather poor girls. 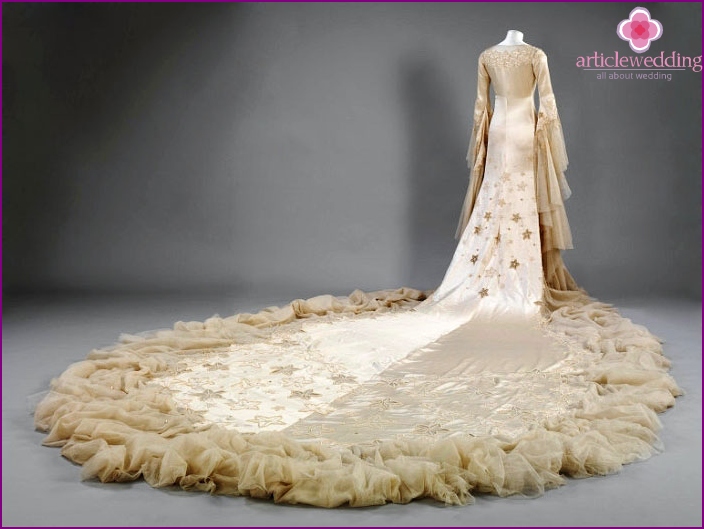 Expensive dresses adorned with jewels: pearls, diamonds, emeralds, sapphires. Sometimes the decorations were so many dresses that the material itself was virtually hidden from outsiders. It is said that the Countess of Flanders Margaret at the wedding ceremony of their own dressed very rich dress, decorated with thousands of jewels. She did not even have the strength to take a few steps to the church Countess literally brought.

Since the 17th century, has played a weddingdynastic role. However, the bride did not stop trying to impress guests their own attire. But sometimes people did not evaluate their choices in different countries different fashion. For example, the Portuguese princess of Braganza Katrina the wedding to the English king came in a pink wedding dress with inner frame, fashionable in her homeland. But the British responded dryly. However, later the fashion for such outfits came up to England.

In the eighteenth century, women from families of averageaffluence want their wedding dress look rich. To this end, the dress is often fobbed off with natural fur. Fur mink or sable is an expensive option, a hare or a fox - more economical. Representatives of the poor families could simply use a linen cloth instead of the usual coarse cloth which was sewn from the usual wear and even lingerie. A loop length and the sleeves were a sign of a newlywed status.

For girls from ordinary families of their wedding dressoften it remained "output" and puts them on every major holiday. Interestingly, the major role played shade of the dress. With respect to color there were a lot of superstitions and prejudices. For the bride's wedding dress in the 18th century chose mainly the following colors: blue and pink. 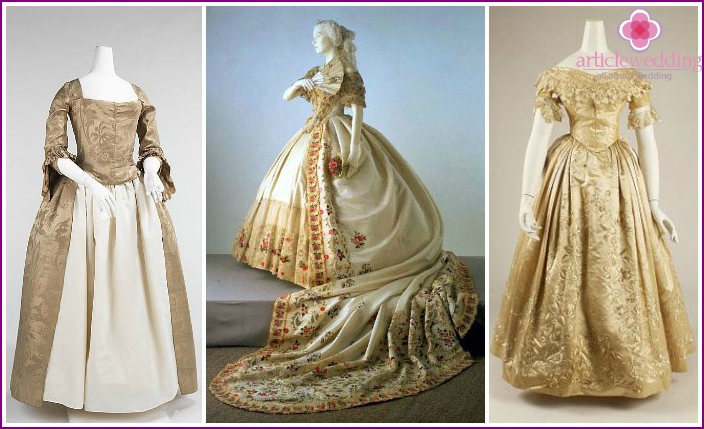 White, despite the association with purity andImmaculate, was impractical color, because this outfit was very easy to dirty. In this regard, often for a wedding dress is often used blue. His innocence was associated with the Virgin Mary. Hence, in English-speaking countries and the custom has arisen to bring to the wedding ceremony something blue. Distributed and was pink.

So, in the 18th century British sculptor wifeJoseph Nolekesa dressed up for his own wedding in a slight tracery white dress embroidered with pink thread colors. The tone to it were chosen and shoes, decorated with floral embroidery. Heel was also very high at that time - as much as 8 centimeters. Incredibly, but the girls liked the outfit all present. 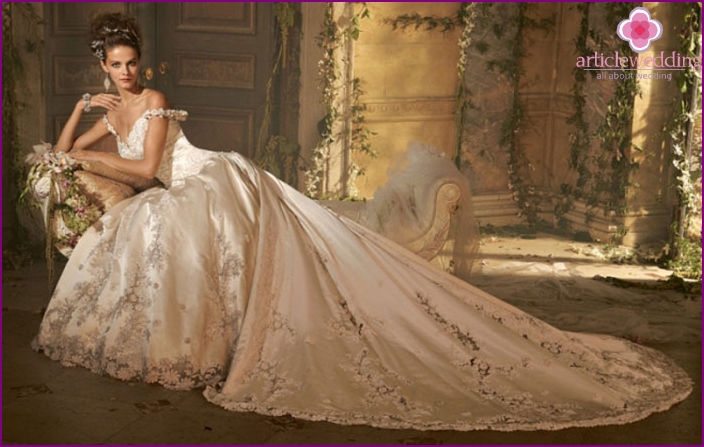 Shades of the same red color for a long time for weddingorders were not used. This tone is used to associate with lewd women. A similar fate awaited and green color - he was considered the color of the forest spirits, elves and fairies. In order not to attract undue attention to the young on their part, tried to avoid such nuances. Black is considered at all mourning. At some weddings even the guests were not allowed to come in a black dress, not to court unnecessary troubles.

Brown tone used for decadesPoor Bride, and then the yellow came out just at the peak of its popularity. Three centuries ago, it was fashionable, but was considered a characteristic color of the Gentiles, so the church perceives it is not particularly good. In the poorer sectors of society for the wedding dress used and gray, above all, thanks to practicality. About a hundred years later it began to associate with the servants.

In the early 19th century a new tradition -decorate wedding dresses with colorful ribbons. They needed to visit, tearing the ribbon, leaving himself on her memory as a souvenir. Later, they were replaced by flowers. The guests came to congratulate the newlyweds with beautiful bouquets and accessory young wife performed a special wedding song. Flowers can even attach to the dress or the bride's hair. Widely used rosemary, myrtle, orange blossom. The tradition is still alive today. 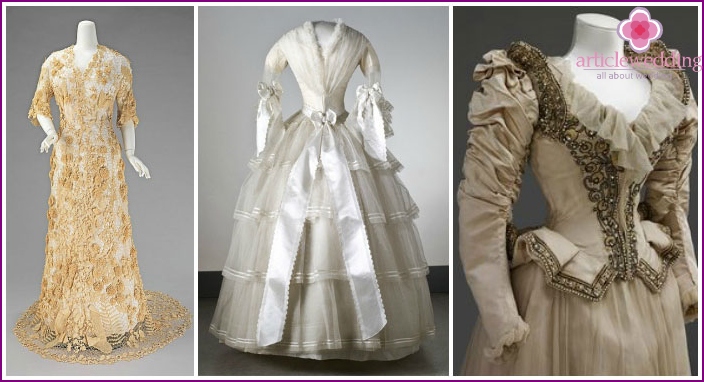 The first wedding dress, vaguely similar tomodern models began to sew at the turn of the 18th and 19th centuries. Then began the production of the tissue machine, gained momentum import material from India. They became popular dress with a veil. In the middle of the century it began to be widely used fishnet gloves and various precious stones. Among the minerals especially popular natural pearl and crystal, fabrics - satin. By the end of the century narrow skirts became fashionable. 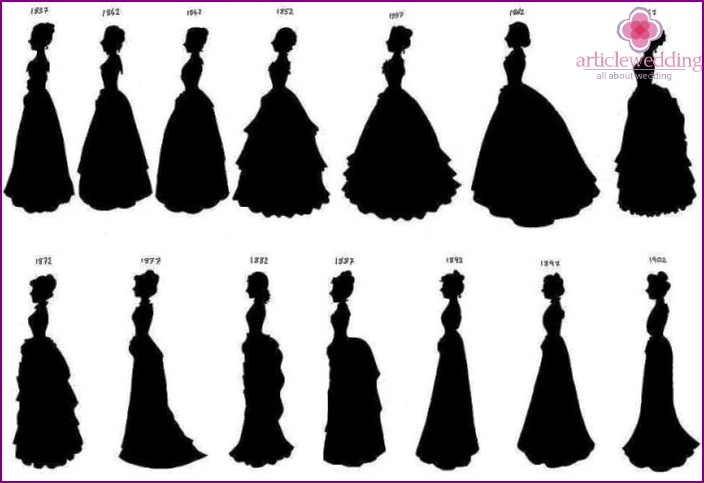 What kind of wedding dresses were fashionable in the 20th century?

In the early 20th century, wedding dresses with skirtslarge volume ceased to be fashionable. They began to decorate the so-called "Crapo" - small wooden knobs, wrapped lace. Wedding dresses were sewed so as to cover even the bride's neck. We used the stand-up collar. The length decreased, it skirts the edge of a covered ankles. The corset is no longer fashionable to attribute, but from time to time used to highlight the silhouette and conceal figure flaws.

In the middle of the last century and returned to popularityromantic style. In vogue skirt long length, cream colors, delicate shoes, slippers and a dress with a slightly slightly dropped waist. These accents allows you to visually transform the gait of the bride, making it light and airy. Legislator became Dior fashion trends, and he began to sew close-fitting dress with a skirt bulk, pulled out to about the knees. 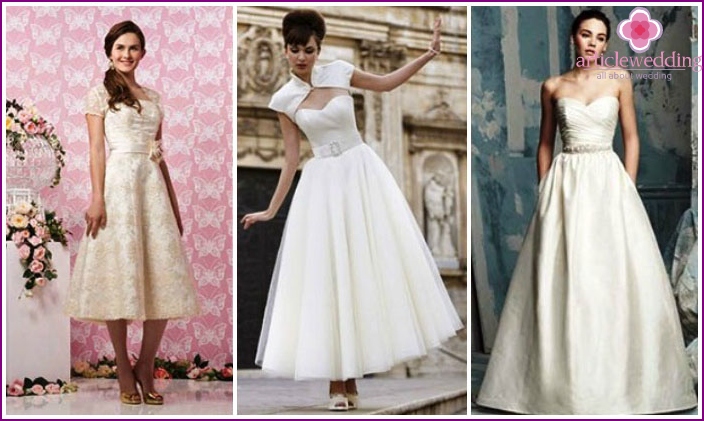 Enchanting breakthrough in the world of wedding fashion 50ss outfit became Grace Kelly. Her dress is hardly another word besides "masterpiece". On the creation of the famous American actress dress for her wedding with Prince of Monaco it took more than a thousand meters of transparent silk taffeta and Belgian lace light of roses (which at that time was more than 120 years). 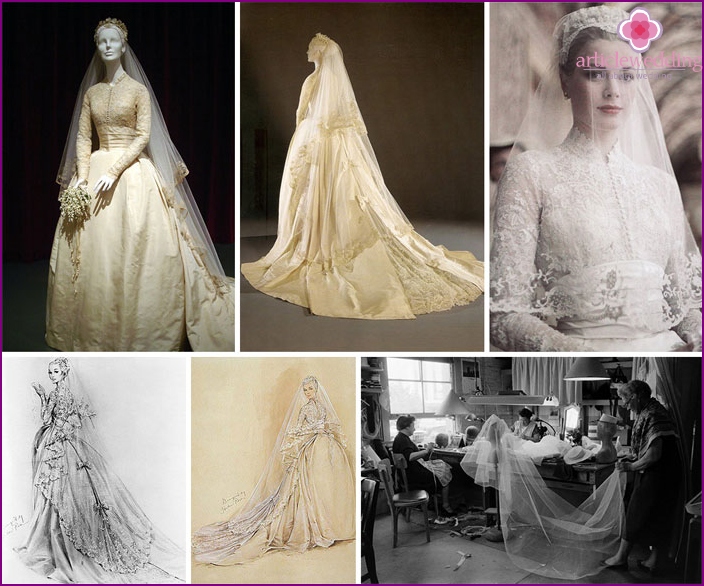 In the next decade the popularity gainedminimalism. Length wedding dress fell, it looked austere and concise. The number of decorative items is minimized. The most popular were the simple short length dresses without any decoration - even without the beads. Geometric lines must be clearly viewed in style. 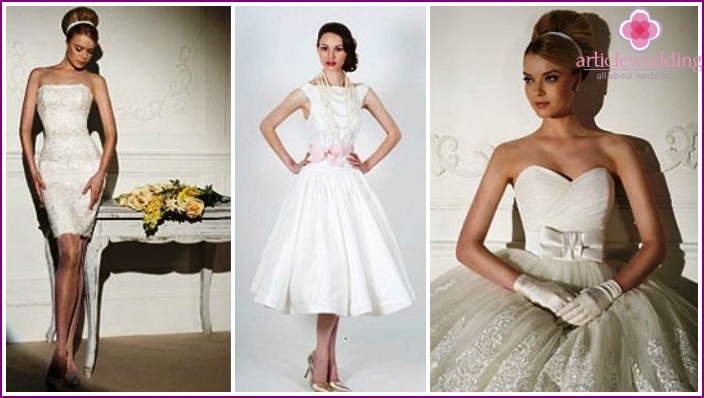 Skirts were the original form - bud, bellsor flower. Many brides of that time went to the altar and trapeze dress (with a tight fitting top and bottom part of the expanded garment). However, the mini dress was not like all the girls. But above all we do not want to follow the new fashion trends and the most famous representatives of the royal families.

Finally, in the 80-ies of the last century weddingdresses have become very elegant. Designers extensive use of free cutting, exquisite lace and romantic ruffles. Latest fashion trends considered decorative embroidery on wedding dresses. And instead of the veil is often used hats. Toward the end of the 80s in wedding fashion, a new trend - more and more often the bride wore not even dress, and pantsuits. 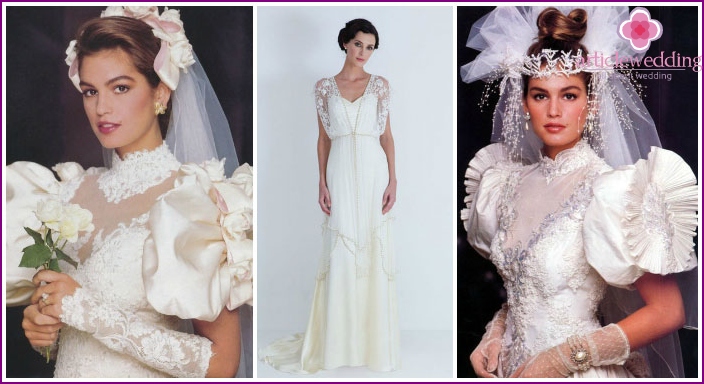 Modern wedding dresses can lookvery different, because the choice of materials - unusually large, and brides imagination has no limits. Often the girls prefer to go back to the origins of fashion, ordering themselves outfits reminiscent of vintage wedding dresses. If you too are dreaming of such a wedding dress, photo galleries see below, which presents a beautiful wedding gowns, made in retro style. 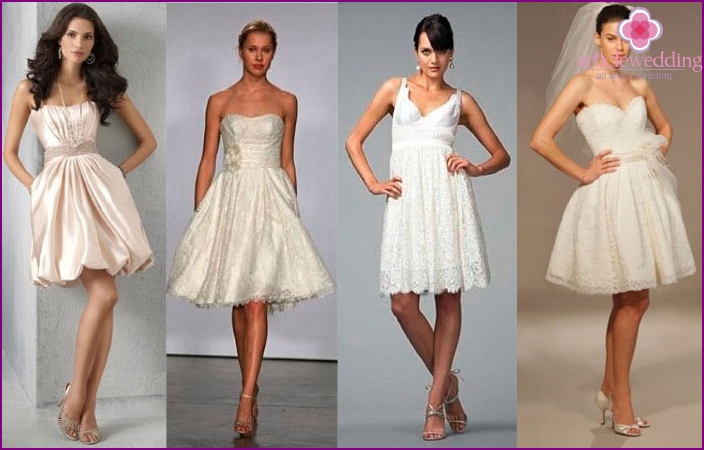 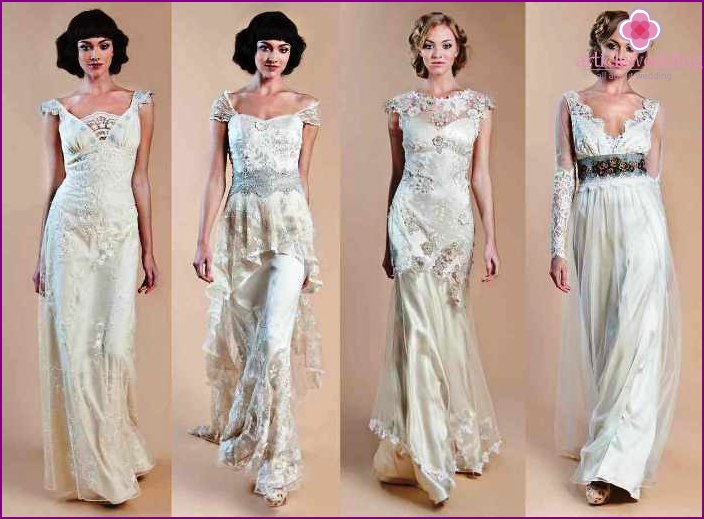 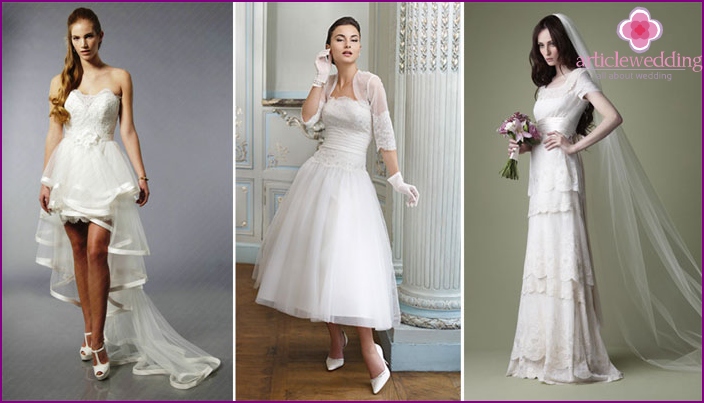 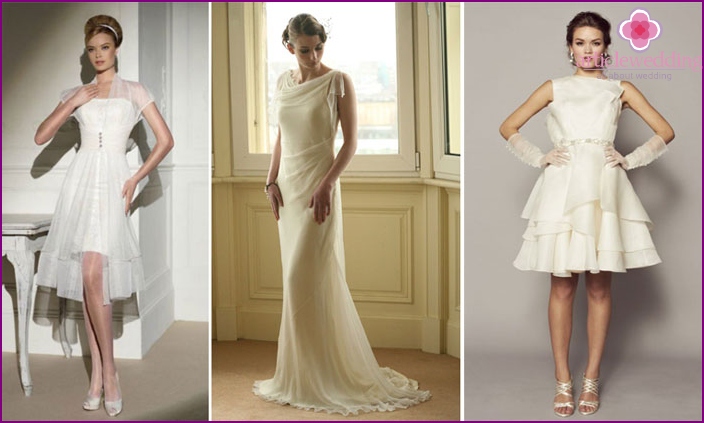 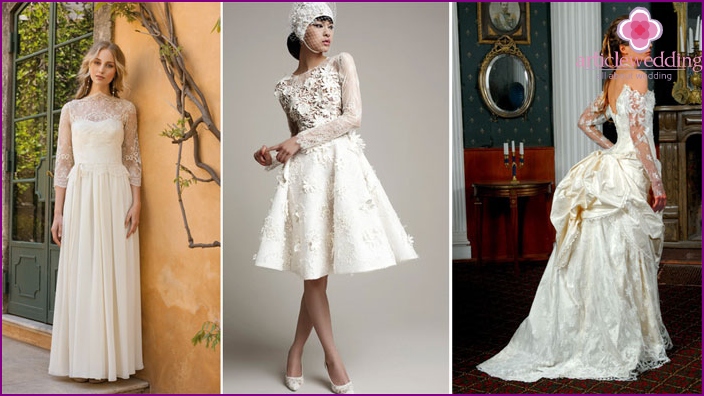 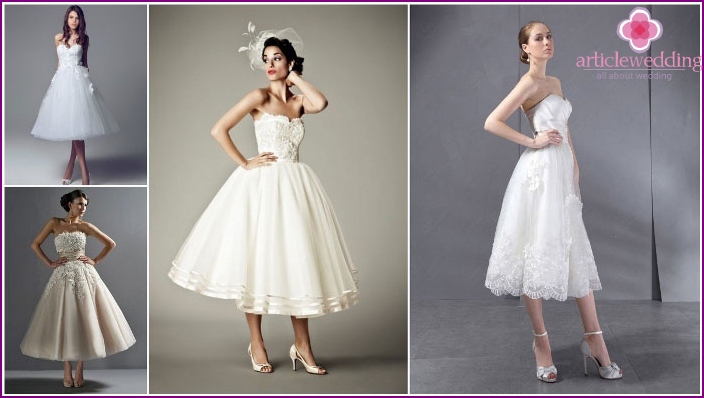 The most beautiful wedding dress in the world