What are the wedding

For each wedding anniversary providedcelebrating certain traditions and gift options. Family Day birthday wife say, only if they were able to build a strong and harmonious relationship. What are the wedding? Each spouse lived together year has its own name. Glass wedding, leather, copper, ruby, pearl, gold and many others. All these names represent the state of family relationships at the time to celebrate the date.

Names of weddings over the years from 1 to 100 years

1. Calico wedding - the first anniversary of the family. Chintz symbolizes the relations between spouses in the year after the wedding day - light and beautiful.

2. Paper. Paper can take different forms, it is malleable. So young family at this time is formed, it acquires its own traditions.

3. Leather. From the day of the wedding was three years old, it is considered a turning point. Therefore, the family should strive to keep building relationships, not allowing testing to sever ties their bond.

4. Linen. This material is stronger and more expensive than cotton. The young family has managed to learn the habits of each other to save household goods and grow roots.

5. Wood. In the family for five years together already formed a solid foundation. Love between husband and wife as strong as wood.

7. Copper. The relationship of the spouses are similar to the metal - they are soft, ductile, so easy to change shape.

8. Tin. The symbol of the eighth day of the birth family - shiny tin.

9. Faience. During this period, the family brings important outcomes, is preparing for its first jubilee anniversary.

10. Pink. The tenth day of marriage, birth is called the tin. Husband and wife at this point already know each other, withstood many trials and strengthened their feelings. Wife wedding anniversary the day wears pink dress.

12. Nickel. The relationship of the spouses in need of a drink freshness. To do this, the twelfth day of the birth family will remember brightness and saturation of the first years of life together.

13. Lace. The intricacies of fate brought thirteen years ago, husband and wife. Celebrate your wedding anniversary is in close cozy circle of close friends. 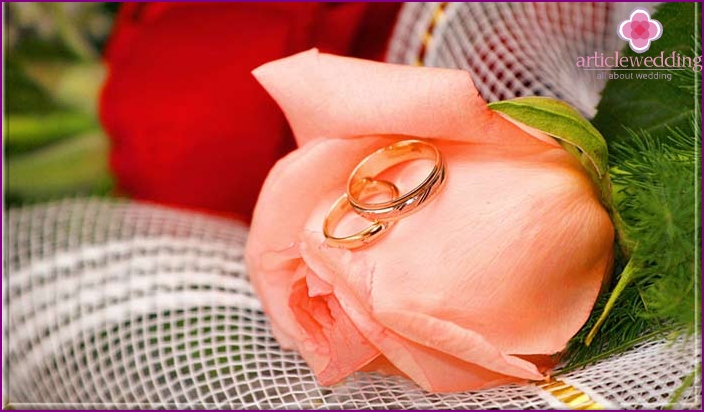 15. Glass. The family should keep in mind that glass at careless handling can break. Therefore marriage must be treated carefully.

20. Porcelain. This wedding anniversary do not forget to invite your friends and family. Prepare a festive dinner, organize interesting fun contests. Make sure that the dishes on the table was a porcelain. It is believed that it attracts to the family fortune, it makes the Union stronger.

25. Silver. The twenty-fifth wedding anniversary - serious date. No wonder so much devoted to her poems and songs. Love couple managed to over twenty-five years to keep their love, tempered silver.

30. Pearl. The couple to the thirtieth wedding anniversary is aware of the value of their relationship that nobody can destroy. Their love - a pearl.

35. plain. After many years, the family is seen as a unity, canvas. It plurality of yarns are firmly intertwined. Strings symbolize children and grandchildren.

37.5. Aluminium. The relationship between husband and wife, after so many years of marriage are light but strong as aluminum.

42. Pearl. This substance is credited with magical properties, superstitious people believe that pearl strengthens relationship with her husband and his wife in their home attracts prosperity, joy.

43. Flannel. This date many ignore. However, family holidays lovers can arrange the forty-third anniversary of a modest dinner with the relatives.

44. Topaznaya. Wedding anniversary is called in honor of the lasting, sparkling stones, which plays a shimmering colors. Just play with different shades of relations between spouses.

45. Sapphire. Since this gem symbolizes eternity, it is assumed that the forty-fifth wedding anniversary symbolizes loyalty to husband and wife to each other.

50. Gold. Some couples celebrate this holiday in the registry office, while others - organize a celebration in a restaurant or at home, gathering around her family, friends.

60. Diamond. For sixty years the couple anniversaries cope with all the difficulties, living happy and sad moments. Marriage is strong like a diamond.

65. Iron wedding. The symbol of the holiday - a strong material, and if the marriage has lived up to that date, which means that its strength is high, like iron.

67.5. Stone. Such interim wedding anniversary is marked not by all.

70. Noble. Septuagenarian wine called noble, and a couple who have managed to keep their marriage for seventy years, are considered to "hold out". But their love has no price.

75. Crown. So the wedding is called because it is crowned by a happy life together as husband and wife.

100. Red. The name of this anniversary gave one survivor from Azerbaijan, who has lived with his wife in love and harmony for a century.

What are the anniversaries of weddings, but gold

Some wedding date are of great importance,others - no. What are the wedding, we understand, but which are considered anniversaries? Commemorative anniversary - a silver (25 years), gold (50 years), Diamond (60 years) and other multiples of "5", the wedding date. In honor of their spouses gather all family and friends, organize a magnificent celebration. However, there is no reason not to celebrate other less remarkable dates. It refreshes the relations of the spouses, happy guests and leave pleasant memories.

Which wedding anniversary decided to celebrate?

As a rule, only the most important are celebratedwedding anniversary. But each family decides to arrange a date of celebration. You can celebrate the cotton (1 year), tin (10 years), crystal (15 years), pearl (30 years) wedding. This list, as desired, it is necessary to continue. Gather the guests who were invited to the wedding, decorate a banquet hall under the theme of celebration and relive the wonderful emotions that day.

Anniversaries that are not noted

What are the wedding? There are those who are allowed to ignore, in honor of others still need to arrange a holiday. Traditionally it not accepted to celebrate 16, 17 and 19, the anniversary of whose names are not listed in the major sources. However, some spouses prefer to organize an annual celebration of the humble or candlelight dinner in honor of the wedding day. Do not take a family holiday as a waste of money or time, because such a pleasant experience filled our life with meaning.

What is presented on the anniversary and wedding anniversaries?

An excellent idea for a gift for wedding anniversarythere will be new engagement ring - a beautiful and expensive than those that couple exchanged at the wedding ceremony. By a solemn date, the symbol of which is a gem can give the second half of decoration, inlaid them. Some couples melted old ring in the new, or retain them in memory. She can hang your old ring on a chain and wear it around your neck. 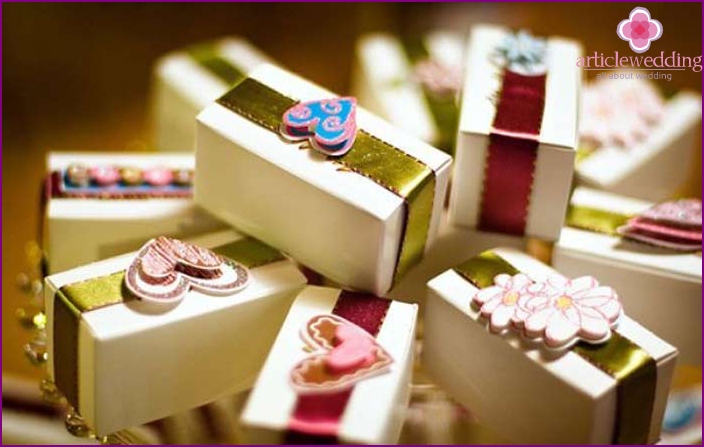 As the wedding day of birth - it is a holidaycouples, is a good solution as a present would be to create a photo album. Choose the pictures that represent the happiest moments of a married couple: a kiss in the registry office, the birth of children and grandchildren, family gatherings. With the advent of subsequent anniversaries of the album will be updated with new photos. If you wish, you can give names to these pictures or write a brief memories of the events depicted.

Create a treasure box, which will beoriginal gift for a holiday. In the beautifully decorated a box to store the most important items for your family. They can be dried flowers, wedding invitations, cheap visited countries and cities, a record US expectant mother donated each other cards, letters, and other important things.

Each anniversary of the spouses decided to presentsymbolic gift. If calico or linen wedding, the family presented things from the corresponding tissues (handkerchiefs, bed linen), a glass and crystal - presented dishes. By the day of the aluminum or nickel wedding present their traditional cooking utensils, interior items. However the most popular gifts for a family anniversary is jewelry, which give each other the spouses themselves.